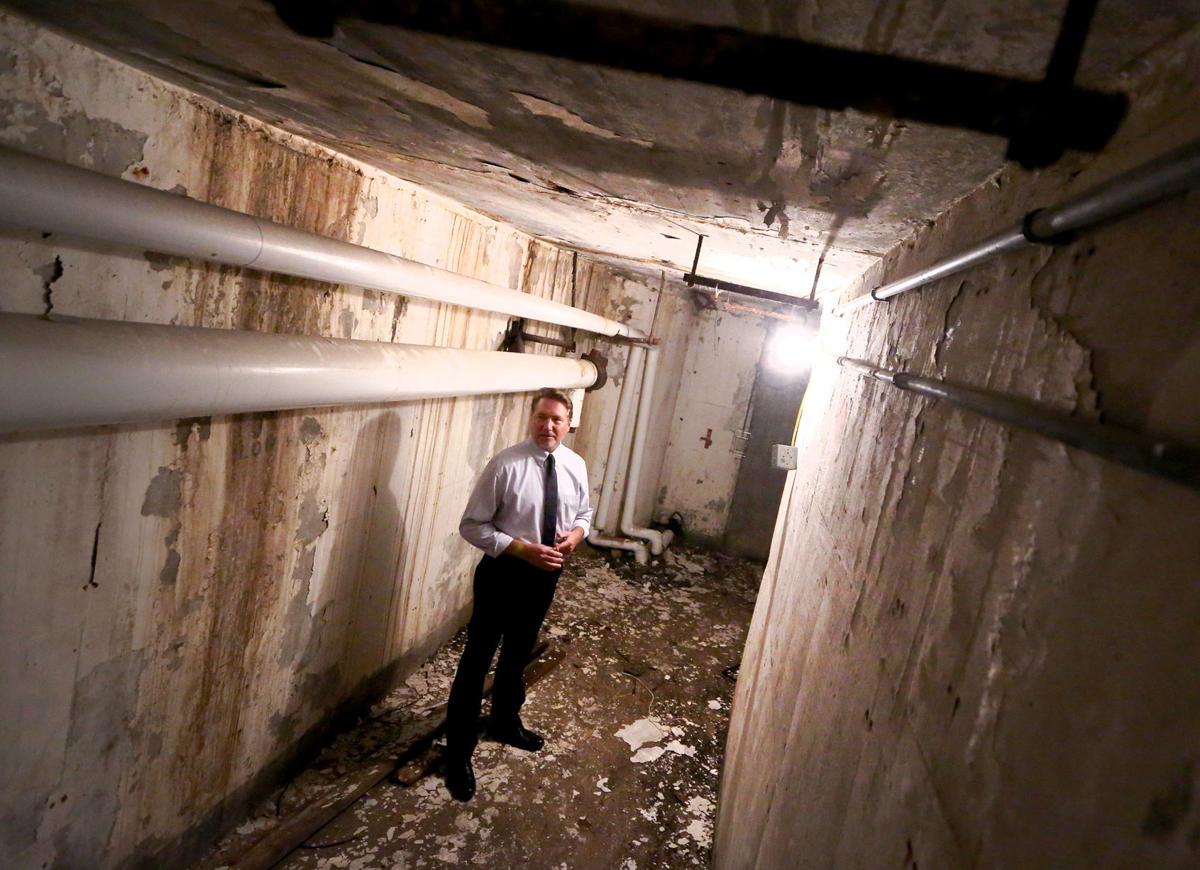 Greg Brockmeyer, then-director of facilities and services for Dane County, provides a tour in 2016 of a tunnel at the Dane County Human Services Building that was converted into an artificial bat hibernation site. So far, no bats have found their way into the tunnel during the past three winters. 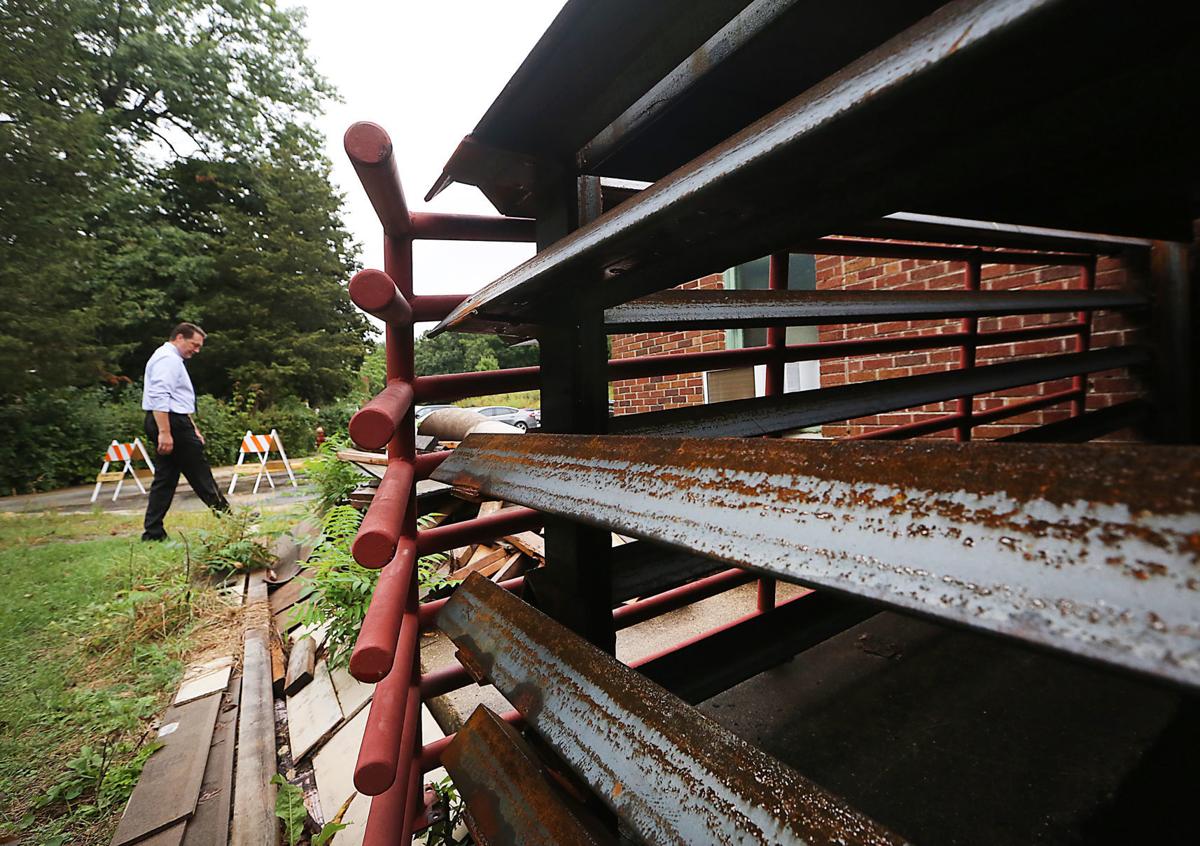 Since the project was completed in 2016, a pair of big brown bats have been relocated to the tunnel, which has metal slats guarding the entrance, to continue their winter hibernation after being found in a nearby home on Madison's North Side.

Entering the fourth winter of availability, a metaphorical vacancy sign still hangs outside an underground-tunnel-turned-artificial-bat-hibernation-site on Madison’s North Side.

The prospective tenants have not yet found the tunnel that once connected a former sanitarium for tuberculous patients — a building which currently houses the Dane County Human Services Department — to a now-demolished dormitory on the property since the tunnel conversion was finished in 2016.

The initial hope for the tunnel was to provide a winter sanctuary free of the fungus that causes white-nose syndrome among bats. The disease continues to contribute to population declines in the state — particularly severe for little brown bats.

“We’ve seen the most severe declines that we were expecting to see,” said Jennifer Redell, a bat biologist for the Department of Natural Resources.

It might not be Batman's tastes, but Madison tunnel could provide winter relief for bats

The fungus first appeared in Wisconsin in 2014 and has infected “essentially all” of the state’s 150 to 200 winter hibernation sites, she said. Since the fungal infection is so widespread, Redell said “there’s a very high likelihood that bats have transported the fungus in every available site.”

In hibernation sites where the fungus has been present for five winters, there has been a 97% decline in the number of bats compared with pre-infection counts, Redell said. Some sites no longer have bats.

During summer monitoring — in which a device searches for echo-location calls — little brown bats only account for 6% of the sound picked up, but used to make up 38% before white-nose syndrome.

First discovered in New York in 2006, the fungus that causes white-nose syndrome has killed millions of bats and has spread to at least 33 states and seven Canadian provinces, according to the U.S. Geological Survey.

The fungus grows on the cold body of a hibernating bat, warming it and potentially waking the bat from its slumber, which can cause a bat to expend stored body fat and die from starvation or cold exposure before the winter ends.

Complicating the situation of making bats aware of the Madison tunnel is the flying animals are difficult to study and have been “relatively poorly studied,” Redell said.

“We don’t know how they’re finding those (hibernation) sites,” she said. “Now we have relatively few bats, so it’s harder and harder to learn that information.”

Redell said bats are able to sense airflow, humidity and temperature changes, and are curious animals, which could lead them to finding suitable hibernation sites.

As far as if there is anything to entice bats to the tunnel, Redell said “not that we know of” other than providing environmental conditions bats find suitable for hibernation.

The 6-foot-wide, 65-yard-long tunnel was estimated to cost a couple thousand dollars to convert into a hibernation site and was rolled into the $500,000 the county needed to tear down the dormitory on the property at 1202 Northport Drive, which abuts the county’s 27-acre Lake View Hill Park.

While no bats have yet to find the tunnel on their own, it has had a couple of residents. Redell said a pair of big brown bats were found in a nearby house one winter and transported to the tunnel to finish their hibernation.

“It’s very rare that we have bats in a building that’s very close to an artificial hibernation site,” Redell said.

DNR to test deer for bovine TB; hunters in Dane, Columbia counties will have to deliver heads

The Department of Natural Resources is requiring all white tail deer harvested from nine towns north of Madison. That means hunters will need to bring deer carcasses to one of four self-service kiosks where they will deposit the heads for testing.

Greg Brockmeyer, then-director of facilities and services for Dane County, provides a tour in 2016 of a tunnel at the Dane County Human Services Building that was converted into an artificial bat hibernation site. So far, no bats have found their way into the tunnel during the past three winters.

Since the project was completed in 2016, a pair of big brown bats have been relocated to the tunnel, which has metal slats guarding the entrance, to continue their winter hibernation after being found in a nearby home on Madison's North Side.