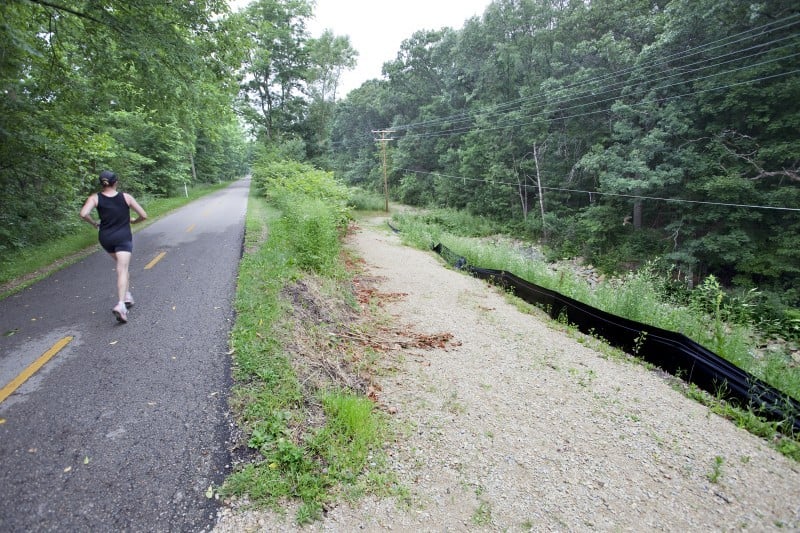 Restaurateur Chris Berge has proposed building a cafe along a bike path near Glenway Golf Course on Madison’s Near West Side that would be inaccessible by car. Supplies would likely be brought in by golf cart, Berge said. 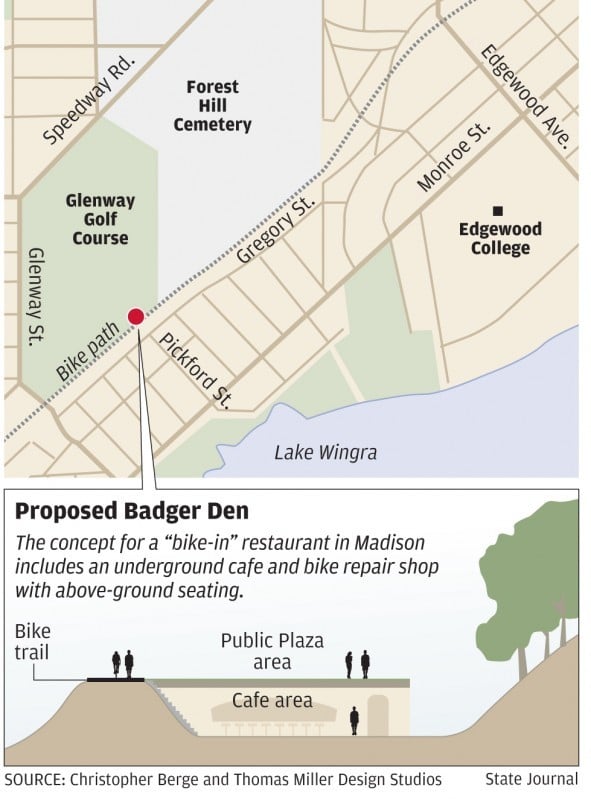 A Madison restaurateur wants to pioneer the antithesis of the drive-in restaurant.

Chris Berge, co-owner of Restaurant Magnus, the Weary Traveler and Natt Spil and cofounder of Barriques and the Blue Marlin, plans to build a bike-path-bound cafe on the city's Near West Side that would be inaccessible by car, serve local food, produce zero garbage and cater to the city's burgeoning bicycle population.

Described as "a hobbit hole meets the American Players Theatre meets a 1950s National Park recreational area," the "Badger Den" would be a "bike-in" bar and grill open from April through October.

Food would be served on plastic or ceramic dishes at seating made from tree trunks. Coffee and juice would be dispensed in purchasable mugs that would fit in a bike holder. And to capture the zeitgeist of the Wisconsin north woods, beer and wine would also be on the menu.

"I want everything to have the logic of tap beer," Berge said. "Bring in a bulk product that's made locally and entire contents are taken away in a person's stomach."

Berge describes the proposed location on the Southwest Commuter Path near the public Glenway Golf Course as "the one place where you can't hear any cars in the middle of the city." The path had 2,600 users in a day according to a September 2008 traffic count, city bicycle and pedestrian coordinator Arthur Ross said.

The property is owned by the city and state Department of Transportation, but the cafe could be similar to an expressway rest stop, with bathrooms, a fountain for filling water bottles and a bicycle repair service station.

Berge hasn't formally introduced the proposal to the city or state, but said he is trying to build public support for the concept because he has the time and money to build it now. He is also pitching the idea publicly because of recent momentum for designating Madison as a platinum bicycle city and a recent trip to Amsterdam by local leaders to learn how European cities facilitate cycling.

Mayor Dave Cieslewicz said the cafe would be consistent with what the city has been doing to encourage bicycling.

"I think it's fascinating idea," Cieslewicz said. "We'd love to work with him on it."

The concept was inspired by remote kiosks Berge came across skiing in Scandinavia, cycling in Dresden, Germany, and mountain climbing in the Emi Shan mountains of China. Closer to home he has seen the growing number of cycling groups who bike to New Glarus for a brew or crowd the bicycle racks at local festivals.

Michael Osborne, owner of Uphill Grind in Cross Plains, a cafe and bike shop opened in 2007 along the Ironman Wisconsin cycling route, said a cafe accessible only to bikers and hikers could be successful with heavy promotion "because there's enough of a cycling community" here.

"It is very possible," Osborne said. "I wouldn't have started this business here if it wasn't possible."

Candlelit live jazz over $32 venison is out and cycling-friendly $10 lunch plates will soon be in, says Madison restaurateur Chris Berge, who plans to close Restaurant Magnus and reopen it as an urban, bike-themed restaurant.

Restaurateur Chris Berge has proposed building a cafe along a bike path near Glenway Golf Course on Madison’s Near West Side that would be inaccessible by car. Supplies would likely be brought in by golf cart, Berge said.