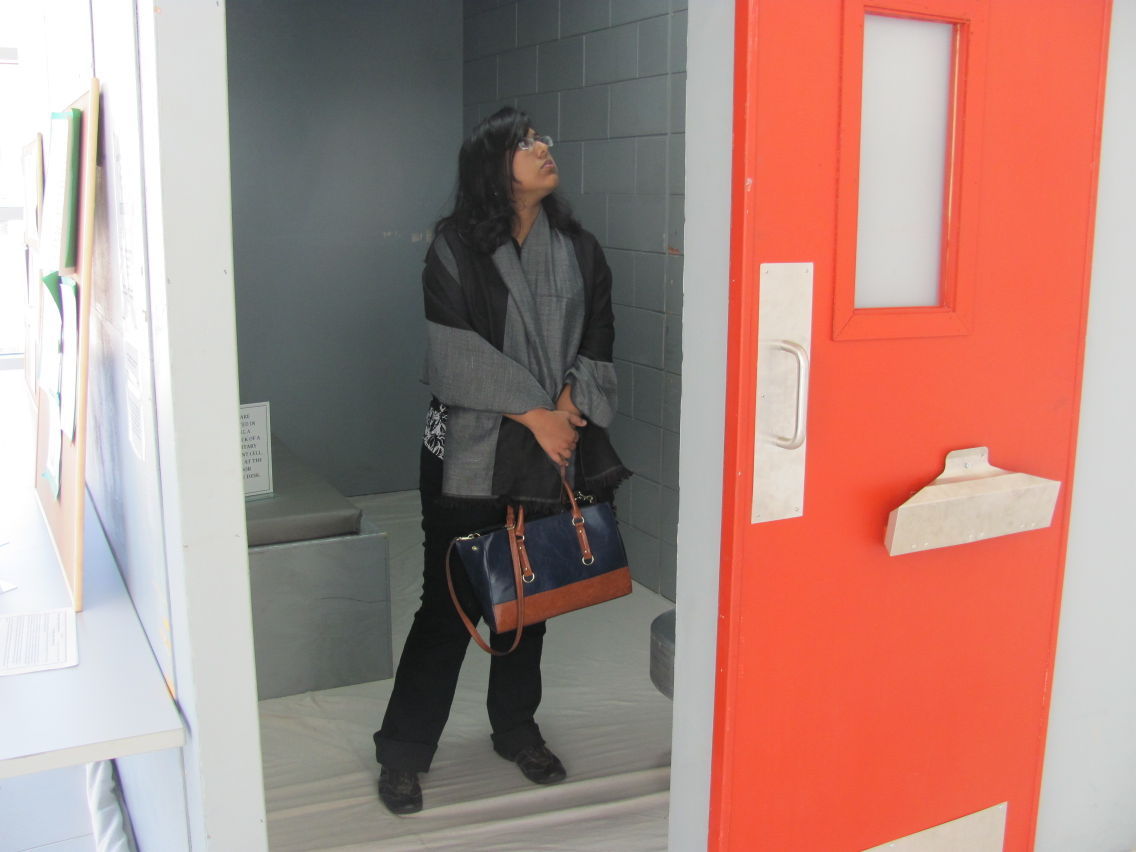 Anita Mukherjee, an assistant professor in the UW-Madison Business School’s Department of Actuarial Science, Risk Management, and Insurance, tours the solitary confinement cell Sunday. Mukherjee said she was curious about the cell because she studies private prisons in the U.S. 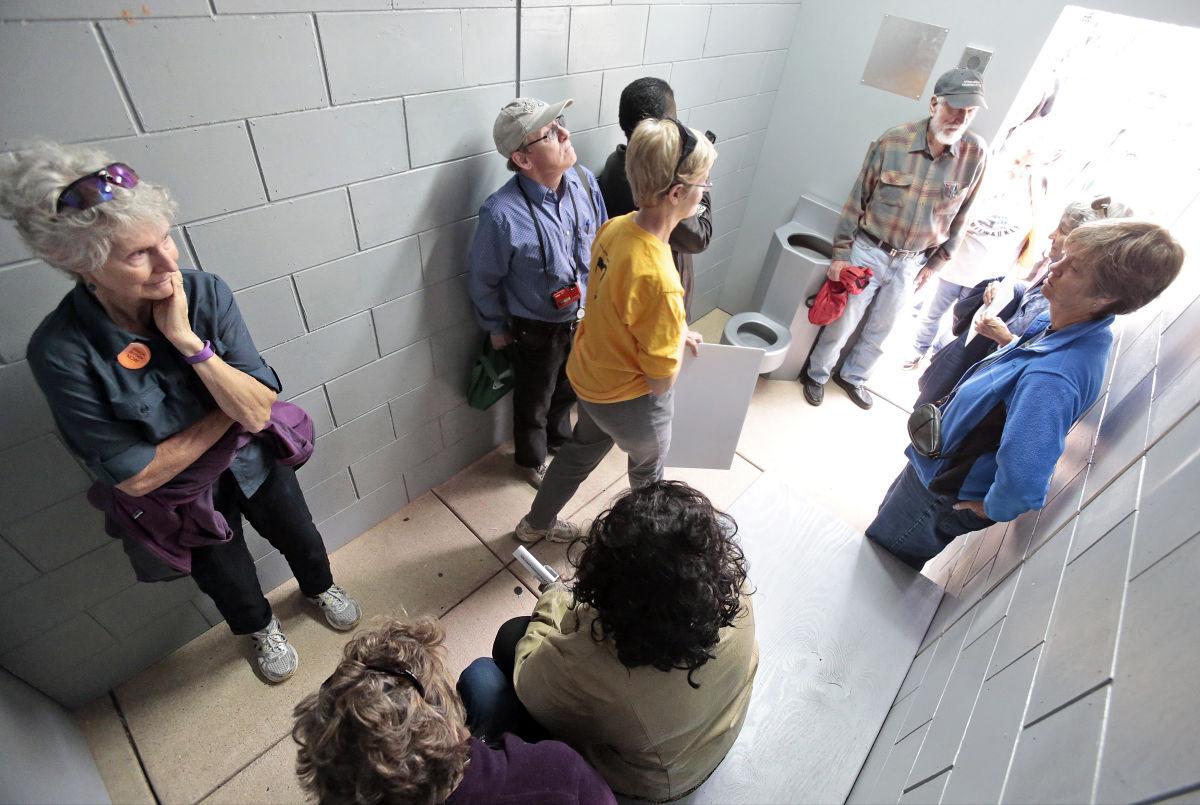 Former inmate Talib Akbar knows about solitary confinement. He estimates he did 10 stints of it over the course of a 20-year prison term.

The Madison resident, who was released from Waupun Correctional Institution in October 2013, said to pass the time he would make friends with the insects that came into his cell. He would get a book or two a week, but otherwise said he was extremely lonely and isolated during his periods of solitary — one lasting 10 months.

“There’s not enough activity in there,” he said. “Guards just pass you by. ... When something’s wrong with you they don’t care about your condition unless it’s an emergency — and that means bleeding. Not a nose bleed or a little cyst or something, but blood pouring out of you.”

Last year, Akbar, 62, who was at the maximum security prison for two counts of sexual assault, wanted to help people understand what it’s like in prison, so he drew a picture of a solitary confinement cell that the interfaith group WISDOM used to build a replica.

That cell is on exhibit until Thursday on the third floor of the Central Library. Visitors are invited to walk into the cell and check out audio from the reference desk to simulate the loud sounds prisoners hear in solitary confinement.

“The cell is obviously very small and very bleak, but the noise is something that is constant. It’s 24/7,” said the Rev. Jerry Hancock, a former Dane County deputy district attorney, who is director of First Congregational United Church of Christ’s Prison Ministry Project, which installed the cell at the library. “It’s pounding, moaning, screaming, and I think that’s what most unnerves people.”

The cell has been in about a dozen venues, most prominently at the state Capitol in fall 2014. In the last year, more than 4,000 people have had some sort of contact with the cell, and Hancock said the overwhelming reaction is of horror.

“Just stepping into the cell makes people deeply affected, particularly when they hear the sound,” he said.

Bev Mazur, who is on the social justice committee of Unity of Madison Church, was one of many people who toured the cell Sunday. Even without using the headphones, she found the cell disturbing.

“It looks really grim. It makes me sad,” Mazur said. “It doesn’t seem like a useful idea to reform a person’s outlook.”

Information posted outside the cell says that from Dec. 1, 2011, to Dec. 1, 2012, Wisconsin placed more than 4,000 men — or 20 percent of the state’s entire prison population — in solitary confinement, far exceeding the national average.

“Ninety days is still six times the international standard for torture,” he said. “That just shows torture is still deeply embedded in the Department of Corrections. And that’s something the people of Wisconsin ought to be deeply concerned about.”

Liz Amundson, a librarian at Central Library, sat on the selection and steering committee for Go Big Read, and in that role crafted discussion questions, which got her thinking deeply about the book. Her goal was to connect the book with Madison and to Wisconsin.

She wanted to make people aware of what’s happening here since so many of the examples in the book are from the South.

“Someone from Wisconsin might think the book doesn’t apply,” Amundson said. “Things in Wisconsin need to change as well.”

Stevenson’s book is about one person’s work, and one organization’s work, in bringing about change. And Amundson wanted to give credit to groups in Madison working to change Wisconsin’s Department of Corrections.

“We don’t have the death penalty here, but we have a solitary confinement crisis here,” she said.

The following events this week are in partnership with UW-Madison’s Go Big Read program, featuring the book "Just Mercy" by Bryan Stevenson.

What: Resource fair, "Reform Now" screening, and presentations by the interfaith group WISDOM.

Details: "Reform Now" is a 45-minute collection of documentaries showcasing work Wisconsin residents are doing to challenge solitary confinement and incarceration practices. The film begins at 5:30 p.m., with filmmaker Tim Coursen leading a discussion after the screening.

WISDOM will present its "Restoring Our Communities Wisconsin" campaign to decrease Wisconsin’s prison population to 11,000 by the end of 2015. Presentation starts at 7:30 p.m.

A resource fair will take place from 5-9 p.m., in which visitors can meet members of community groups who are addressing racial inequalities and working for social justice. Groups will include WISDOM, MOSES, Madison Groundwork, Urban League of Greater Madison, Justified Anger, YWCA, and Madison Urban Ministry.

At around 9 p.m. officers responded to a report of a stabbing in the 700 block of Braxton Place, where they found a man with multiple stab wounds.

Anita Mukherjee, an assistant professor in the UW-Madison Business School’s Department of Actuarial Science, Risk Management, and Insurance, tours the solitary confinement cell Sunday. Mukherjee said she was curious about the cell because she studies private prisons in the U.S.