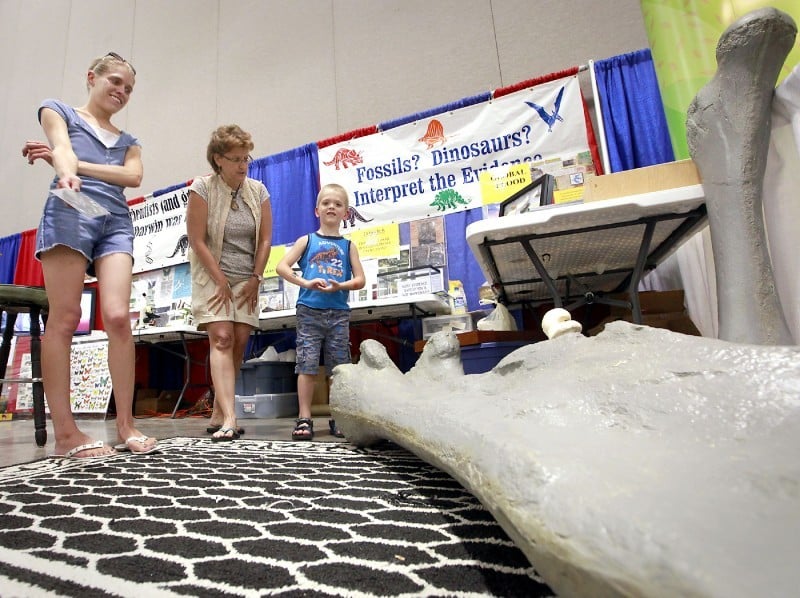 Mary Weigand, center, talks with Michelle Malchoski and her son, Owen Nelson, 5, at Weigand’s “What’s the Evidence?” booth at the Dane County Fair. In the foreground are replica bones of dinosaurs, which Weigand believes lived at the same time as man within the last 6,000 years. 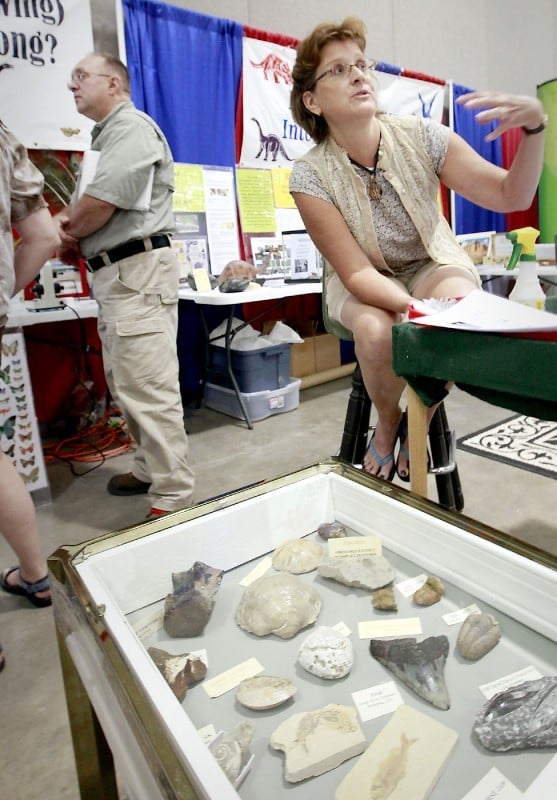 Mary Weigand of West Bend and booth volunteer Bob Fenrich of Mount Horeb share their views on creationism with visitors at the Dane County Fair.

Just down from the Tupperware booth, and across from the demonstration kitchen for "The Original Waterless Cookware," Mary Weigand promotes something very different at the Dane County Fair.

The part-time nurse from West Bend seeks to convince people that the universe is only 6,000 years old and that Charles Darwin was wrong. Her booth proclaims Christianity and evolution incompatible.

"Can you believe in evolution when God says he created the world and everything in it in six days?" she asked. "There's really nothing to reinterpret."

Weigand, 48, said she's spending $680 this year for a booth for five days, the second year she's been at the Dane County Fair. She also plans to be at fairs this year in Waukesha, Sheboygan, Washington and Ozaukee counties.

She is self-funded, with financial help from others who believe as she does, she said.

Donald Waller, a UW-Madison botany professor who studies evolutionary biology, was dismayed to learn of the booth's existence from a reporter.

"I think it's a testament to the power of belief and the difference between belief and science," Waller said. "She is asking that the physical laws of the universe be changed to accommodate her views."

Techniques such as radioactive isotope dating repeatedly conclude that some geological features are hundreds of millions of years old, Waller said. "There's little disagreement among scientists about the age of the Earth," he said.

Weigand said she became frustrated several years ago with the education her son was getting at a public high school. She felt the textbooks were not scientifically sound and that district officials would not listen to opposing views. Since 2006, she has taken her case directly to the people at county fairs.

At the Dane County Fair booth, she displays dozens of fossils she's collected and purchased over the years — fossils, she said, that show there's been no progression over time for plants or animals.

"This is all the same stuff we see today," she said. "Where are the intermediate forms in the fossil record?"

A better explanation for the formation of fossils is the catastrophic flood described in the book of Genesis, she said. That was about 4,500 years ago, she said.

"This is nothing new. This is the standard creationist story," said Charles Byers, UW-Madison professor emeritus of geology. "There are lots of examples of intermediate fossils showing progression of life going back for half a billion years."

Wednesday, the first day of the fair, Weigand's booth was getting quite a bit of interest and a largely positive response.

"As long as they're just explaining things nicely and not pressing their views, I don't think it's a bad thing at all," said Mike Brown of Oregon, who stopped by with his children and said he agreed with much of what he saw.

Rob Hecimovich of Madison said some Christians interpret the Bible as suggesting the world is very, very old, while others, such as Weigand, believe in a literal interpretation.

"In the end, we just don't know," he said. "I think she is just as likely to be right as the other people."

Mary Weigand, center, talks with Michelle Malchoski and her son, Owen Nelson, 5, at Weigand’s “What’s the Evidence?” booth at the Dane County Fair. In the foreground are replica bones of dinosaurs, which Weigand believes lived at the same time as man within the last 6,000 years.

Mary Weigand of West Bend and booth volunteer Bob Fenrich of Mount Horeb share their views on creationism with visitors at the Dane County Fair.