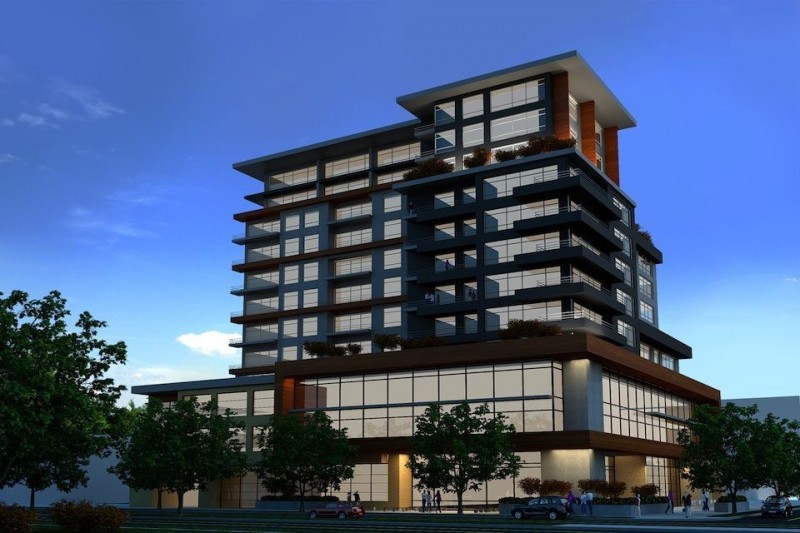 This rendering by Gebhardt Development is one of three proposals being considered for a planned redevelopment of the former Don Miller auto dealership properties. 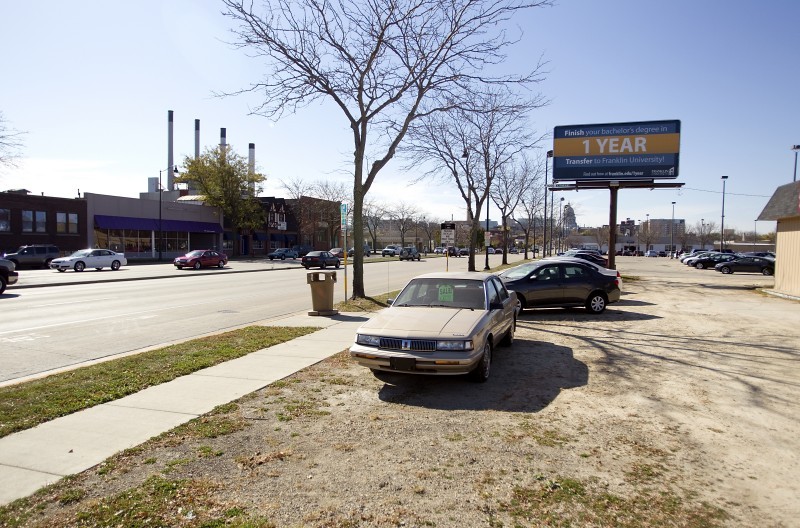 As the city negotiates land purchase options with developers for three sites on the 700 and 800 blocks of the street, officials are also considering a proposal to use vacant auto showrooms as daytime shelter for the homeless this winter.

Three developers — Gebhardt Development, The Rifkin Group, and Urban Land Interests — were chosen from a larger group that offered initial proposals in the spring and are now hammering out land purchase, project terms and more. A temporary daytime homeless shelter would not affect redevelopment plans.

Gebhardt, which proposed a $31.5 million, mixed-use project for a 1.5-acre site on the north side of the 700 block, is furthest along. The developer has begun meeting with residents and is close to signing a letter of intent on purchase and other terms that should be brought to the City Council this month.

Once those terms are set, Gebhardt and the others will refine proposals and submit formal plans, triggering the city's review process.

If all approvals are received, Gebhardt could start construction in the spring of 2012, project architect Christopher Gosch said.

The city, hoping to lure development, create jobs and increase the tax base, bought eight acres — mostly the former auto dealership — on the street for $5.8 million in late 2010.

"We took it off the tax rolls," said Ald. Bridget Maniaci, 2nd District, who represents the north half of the properties. "We have to get them back on in a timely fashion."

Soglin declined comment on project details but said one goal is to recoup the city's $5.8 million investment in the land. The city can provide tax incremental financing (TIF) support, but any TIF requests will be tightly scrutinized, he said.

The Gebhardt proposal, which includes retail and office space, 185 apartments, 21 townhouse-style units and a 250-stall parking garage, aligns with the neighborhood's design plan for the area but exceeds a city 10-story height limit by two stories. The extra stories are needed to make the project viable, Gosch said.

Recently, Maniaci proposed legislation to allow 12 stories at the site.

Maniaci hopes to convene a neighborhood meeting on the Gebhardt proposal for early December.

Rifkin initially proposed a $24.7 million, 90,000-square-foot mixed-use project with two smaller buildings on the south side of the 800 block of the street. The proposal includes retail and office space and a 373-space parking garage.

Marty Rifkin said he won't refine plans until he secures a purchase option, but is optimistic that will happen and hopes to move through the review process and begin construction in late 2012 or early 2013.

ULI has offered a mixed-use project with 140,000 square feet of office space, 89 apartments and a 400-stall parking garage to be built in three phases on the north side of the 800 block of the street.

Brad Binkowski, a principal at ULI, said negotiations on a land purchase option could be done by late November and that, after a city review, construction could start as soon as the summer of 2012.

Other proposals for the Don Miller property, including a building to be leased to Ale Asylum brewery, are not being pursued. Ale Asylum recently announced plans to build a larger facility near Dane County Regional Airport.

Porchlight is moving forward with plans to open a winter day center for homeless people at a former car dealership on East Washington Avenue.

Metcalfe's floats an alternative to plan already in negotiations.

This rendering by Gebhardt Development is one of three proposals being considered for a planned redevelopment of the former Don Miller auto dealership properties.