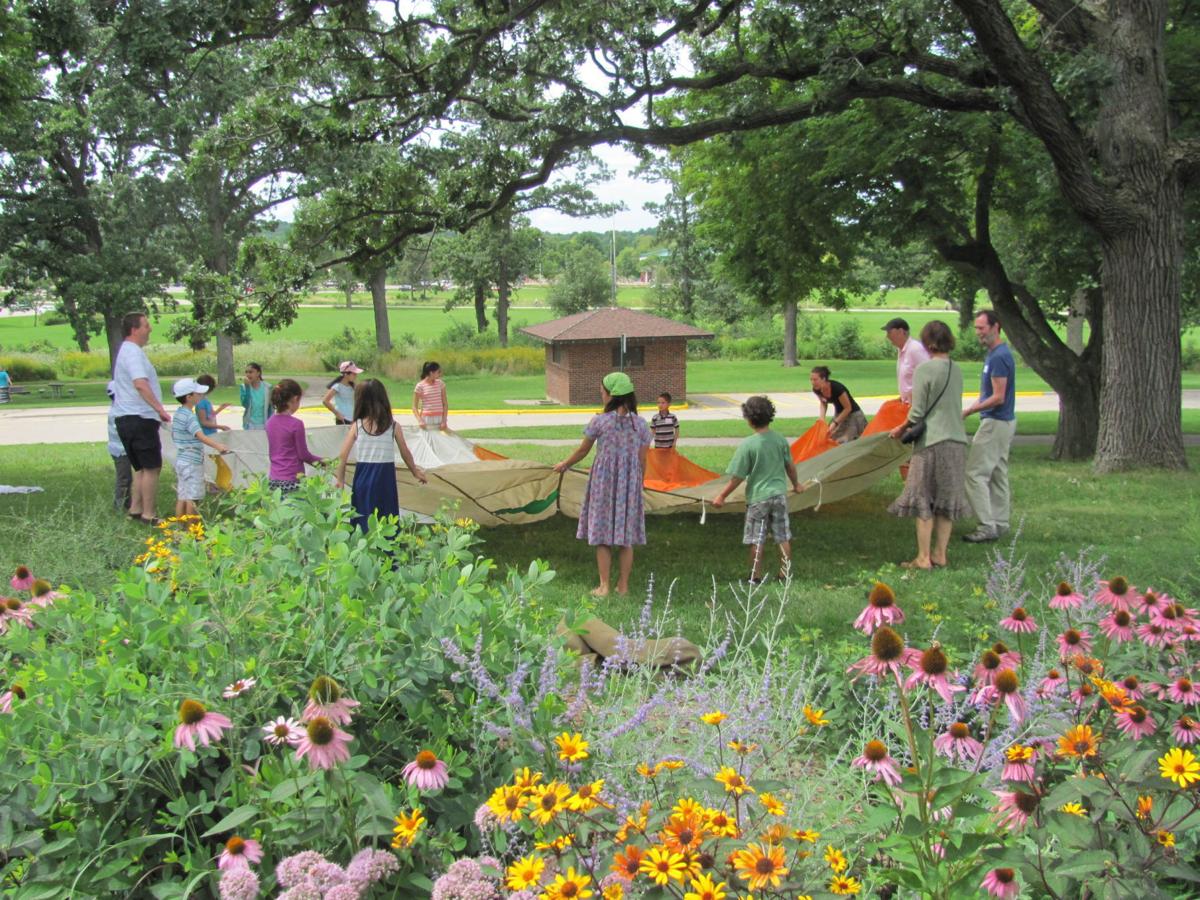 Jim Wildeman, third from right, leads a parachute game Sunday at a picnic hosted by the local group Open Doors for Refugees at Olin Park. "This is Madison's response to an unfair American response to immigration in America," Wildeman said. "America is not an unwelcoming country." 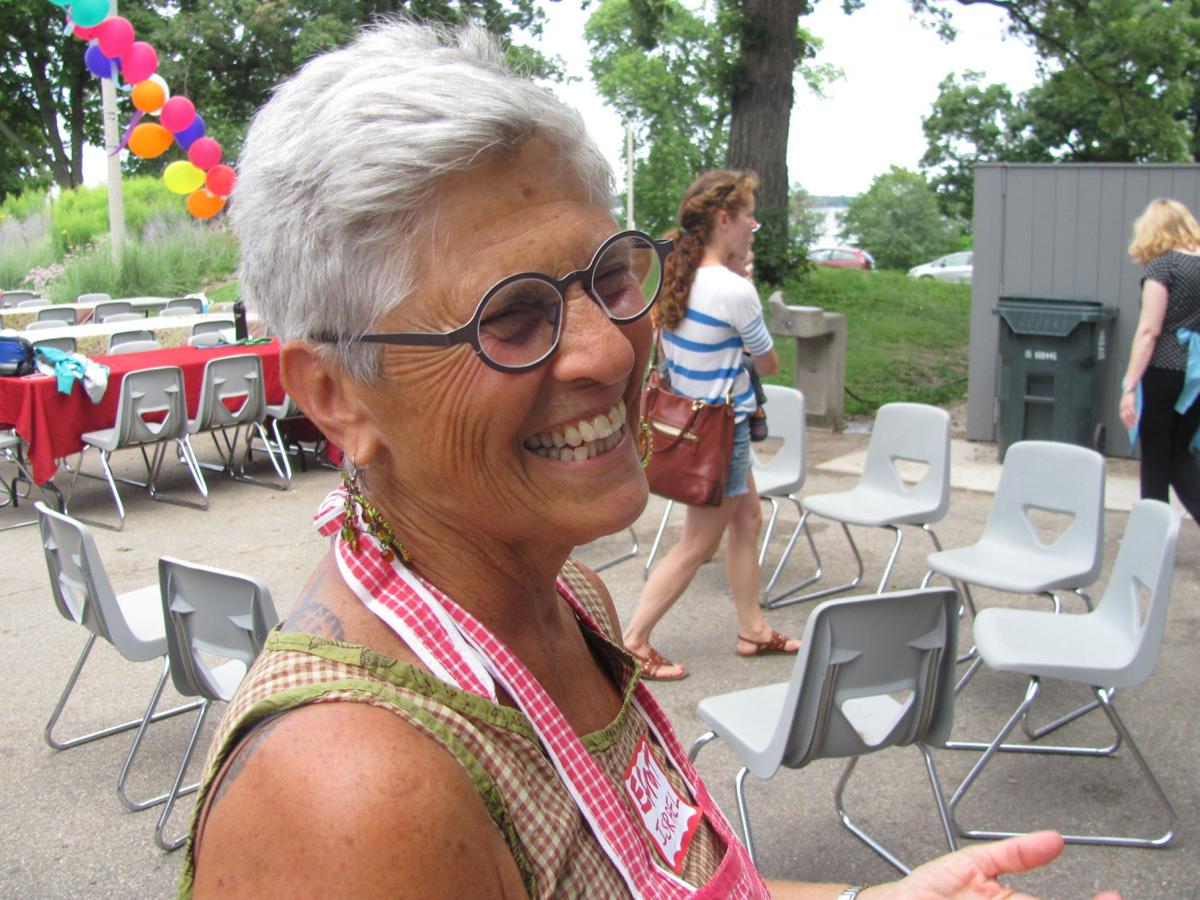 Israeli native Efrat Livny, who came to Madison 33 years ago, started the local group Open Doors for Refugees, which supports the resettlement of refugees in the Madison area and welcomes them into the community. 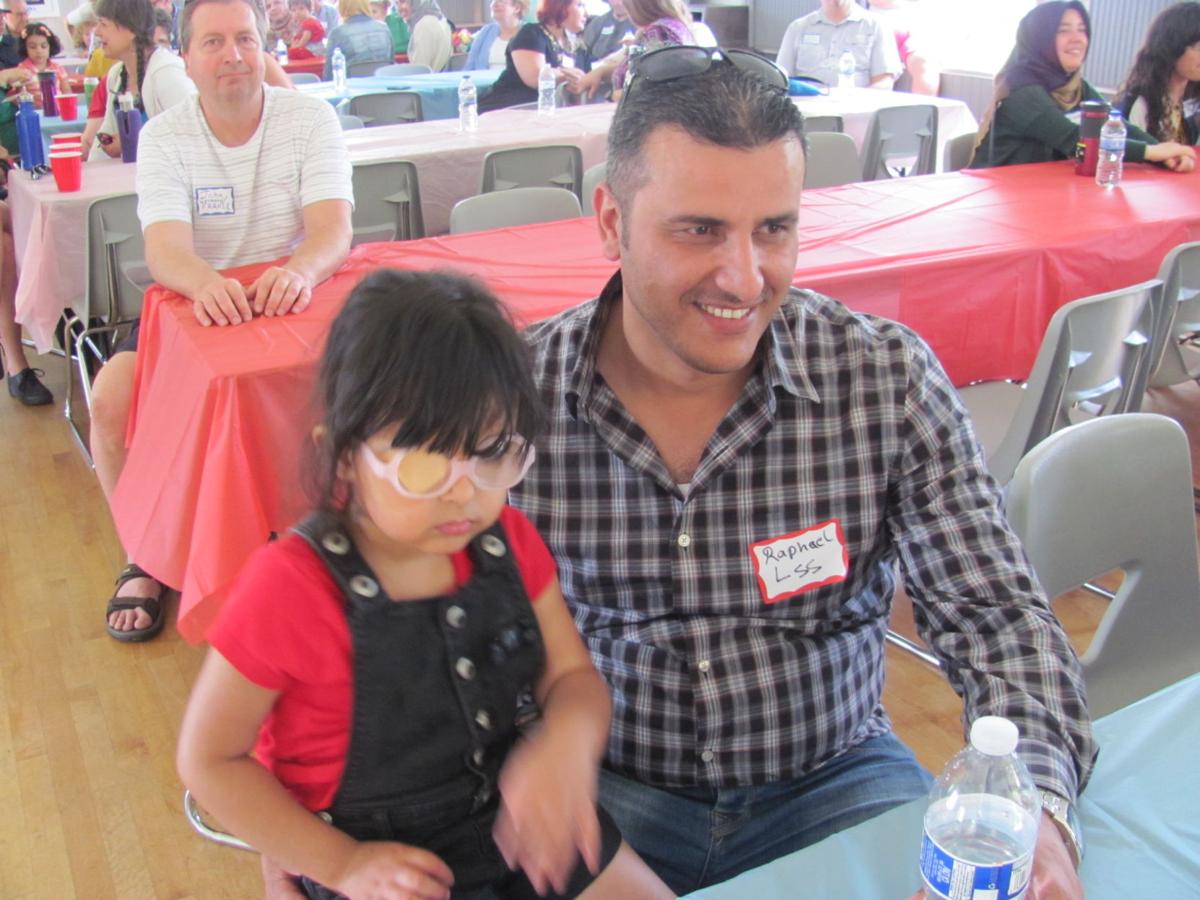 Raphael Al Rubaye came to Madison from Iraq eight months ago with wife Ola and daughters, Yosser, 6 and Shaimah, 3, pictured.

Raphael Al Rubaye left Iraq for Madison eight months ago with his wife and two young daughters and has found a welcoming community here.

He served with the U.S. Army in Iraq for six years in the American-led war against al-Qaida and the Taliban. He was brought to this country by Lutheran Social Services and now works as a case manager for the organization, helping in the resettlement of other refugees.

His life in Iraq was “fun, terrible, dangerous, scary, happy, worried, everything,” he said. “Just like any life.”

Serving with the U.S. Army filled him with pride, Al Rubaye said, calling it “more than a job.” He learned a lot and tried his best to help people, he said.

Al Rubaye and his daughters were among about 200 people who took part in a community celebration, picnic and fundraiser hosted by the local group Open Doors for Refugees held Sunday at the Olin Park shelter.

The situation in Iraq right now is not peace, but it’s not war, Al Rubaye said.

Everything can be fine, but then something blows up. “Everybody is confused, then the next day we forget about it like nothing happened,” he said.

“We are a tough people. We just forget about it and keep going. It’s happened. Every day we say we will start over,” Al Rubaye said.

Open Doors for Refugees, a group dedicated to supporting the resettlement of refugees in the Madison area and welcoming them into the community, was started by Israeli native Efrat Livny.

She came to Madison 33 years ago when her then-husband took a job at UW-Madison.

Livny ran the UW Biotechnology Center for 11 years before studying massage and eventually doing body work and teaching. Two years ago she started Threshold, a business and community space on Atwood Avenue.

“One of the best things that’s happened to us is that we’ve gotten to be friends with Syrian families, which as an Israeli has been a little touchy,” Livny said about herself and husband, Ken Baun. “But, oh my God, it’s been incredible.”

It all started when she got the book “Soup for Syria: Recipes to Celebrate our Shared Humanity,” and began making soup for her monthly lunches at Threshold. She would dedicate the meal to the welfare of Syrian refugees.

She soon realized she needed to do more and began bringing in speakers and holding discussion circles.

During those discussions, Livny asked people about their feelings. “How can we sit back when this is happening?” she said. “Being Jewish, I’m really sensitive to it. But I’m also from the Middle East and Syria was always such a strong nation.”

Other neighboring countries struggled, but she thought of Syria as tough and determined, Livny said. “It was really kind of a shock to me and I just couldn’t sit still about this.”

President Barack Obama announced an effort last fall to resettle 10,000 people displaced by the war in Syria within a year.

It was met with controversy and resistance, but the U.S. could meet or exceed that target, according to figures released Friday.

Syrian refugees aren’t coming to Madison, Al Rubaye said, noting that Lutheran Social Services is allowed to resettle 100 refugees each year and most are from Iraq and Afghanistan.

Jewish Social Services is also involved in resettlement efforts, but aids half as many people.

Physician Abdul Halabi came to Madison from Syria for medical training in 2002 and joined UW Health in 2013.

While Americans are arguing over whether to take 10,000 or 100,000 Syrian refugees, the fact remains that 12 million Syrians have been displaced in the past five years, Halabi said.

Still, he supports U.S. efforts to take in refugees. Refugees are good for a community, Halabi said. “We just need to support them and help them.”

In the past three years he’s been living in Madison, Halabi has seen 5,000 patients as a UW doctor, he noted. He is active in teaching residents and medical students, and is involved in the community. He teaches his children to vote. He shows up on time. He respects the law, pays his taxes, and is a good neighbor.

In Madison, there are many examples of immigrants like him, Halabi said.

Most immigrants, including refugees, embrace American values and are not here to be a drain on the system, he said.

“They are here to work and find a life,” Halabi said.

Even before the pandemic hit, running Threshold, a community gathering place on the East Side, was a challenge, said its owner Efrat Livny, who is closing her co-working and event space next month after six years.

Jim Wildeman, third from right, leads a parachute game Sunday at a picnic hosted by the local group Open Doors for Refugees at Olin Park. "This is Madison's response to an unfair American response to immigration in America," Wildeman said. "America is not an unwelcoming country."

Israeli native Efrat Livny, who came to Madison 33 years ago, started the local group Open Doors for Refugees, which supports the resettlement of refugees in the Madison area and welcomes them into the community.

Raphael Al Rubaye came to Madison from Iraq eight months ago with wife Ola and daughters, Yosser, 6 and Shaimah, 3, pictured.