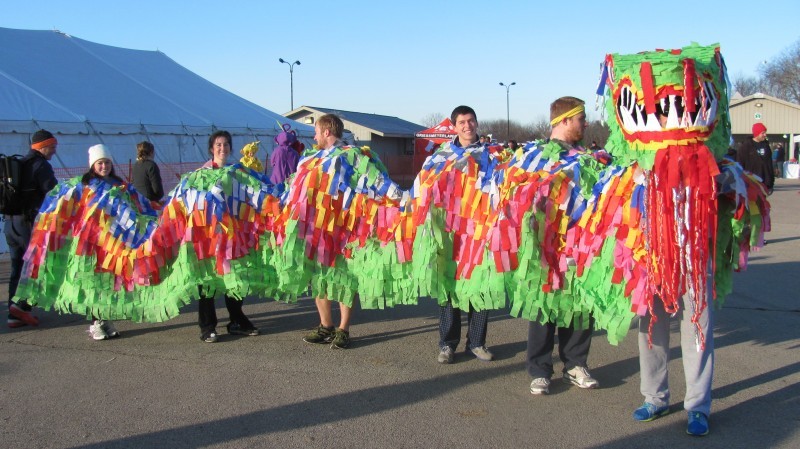 The six friends and relatives who won the costume contest as part of the Madison Mud Run, are from left: Callie Gallagher, Green Bay; Megan Schlittler and Ben Mahaffey, Galesville; Leo Gallagher, Madison; Dan Mahaffey, Wausau; and Devin Mahaffey, Milwaukee. Four members of the group won together last year when they went as chickens. 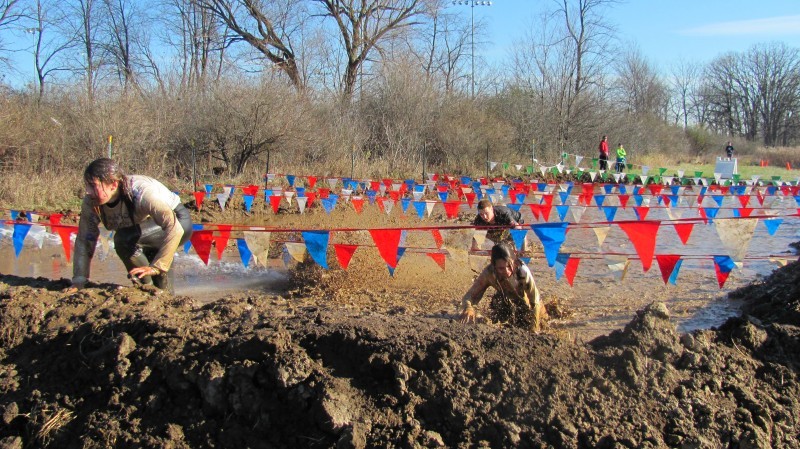 Some of the 1,150 entrants crawl on their hands and knees through a mud pit while getting blasted by a fire hose Sunday at the Madison Mud Run.

They knew they had no chance of winning Sunday’s Madison Mud Run, but with a couple weeks of work and a lot of creativity, they put together a colorful, six-person dragon costume and won the event’s costume competition.

“We’re not going to win the running race, so we might as well look good doing it,” Mahaffey said.

Schlittler and Mahaffey were among 1,150 people — many in costume — who took part in the sixth Madison Mud Run, a 5-mile obstacle-course run held in the spring and fall since 2010.

The event, which started and ended at Festival Park in Verona, was billed as “Madison’s Dirtiest Race.”

Runners started out hopping in potato sacks, had to carry pumpkins, go through a haunted tunnel, scale a 12-foot climbing wall, traverse a 52-foot inflatable obstacle, and crawl on their hands and knees through a mud pit while getting blasted by a fire hose.

Participants paid $55 in advance or $66 on race day for the privilege.

The Mud Run is one of a wave of challenging athletic events that are an adventurous alternative to the basic charity-run-free-T-shirt 5K or 10K. They have been springing up across the state in the past few years.

The event was put on by Ryan and Lauren Griessmeyer of Race Day Events, which produces 20 to 30 races a year in the area.

Ryan said last fall’s event was the biggest with 1,450 registrants. Participation is down slightly as similar events enter the Madison market. “It’s getting saturated,” Ryan said.

The Spartan Race in the Chicago area Saturday drew some people who would have otherwise done the Mud Run, Ryan said.

The race didn’t return to the area this year, going instead to Sheboygan County.

“Ryan and I have done it. It’s an awesome event, but we’re interested in giving people a challenge that they can tailor to their fitness level,” Lauren said. “We don’t penalize people for not doing obstacles.”

The Griessmeyers said they are more focused on people having fun. Their obstacles aren’t as dangerous, Lauren said. “No one’s going to get electrocuted. Let’s put it that way. There are no shocks.”

Meanwhile, the costume contest winners, Mahaffey and Schlittler, who live in Galesville, 25 miles north of La Crosse, were contemplating how to race in their dragon costume.

“We can barely walk in it. I don’t know how we’re going to run,” Mahaffey said.

Wisconsin health officials reported 42 new deaths related to COVID-19 on Saturday, but also a decline in hospitalizations as the state continues its vaccination program.

A 70-year-old Milwaukee man, who originally was institutionalized 48 years ago after murdering a man outside of Horicon, was granted a conditional release and returned to Milwaukee Friday.

A Baraboo woman allegedly went on a vulgarity-filled rant while threatening a law enforcement officer after being arrested for her third operating while intoxicated offense when she was found sleeping drunk behind the wheel of her vehicle in the town of Clearfield.

A man was arrested after breaking the bones of security guards, 77 and 75, and causing a disturbance at East Towne Mall on Friday night, Madison police reported.

It's easy to get the wrong idea about Gary Gates when he's out scrounging in dumpsters, draining the leftover drops from beer cans and crushing them in his gloved hands.

The six friends and relatives who won the costume contest as part of the Madison Mud Run, are from left: Callie Gallagher, Green Bay; Megan Schlittler and Ben Mahaffey, Galesville; Leo Gallagher, Madison; Dan Mahaffey, Wausau; and Devin Mahaffey, Milwaukee. Four members of the group won together last year when they went as chickens.

Some of the 1,150 entrants crawl on their hands and knees through a mud pit while getting blasted by a fire hose Sunday at the Madison Mud Run.