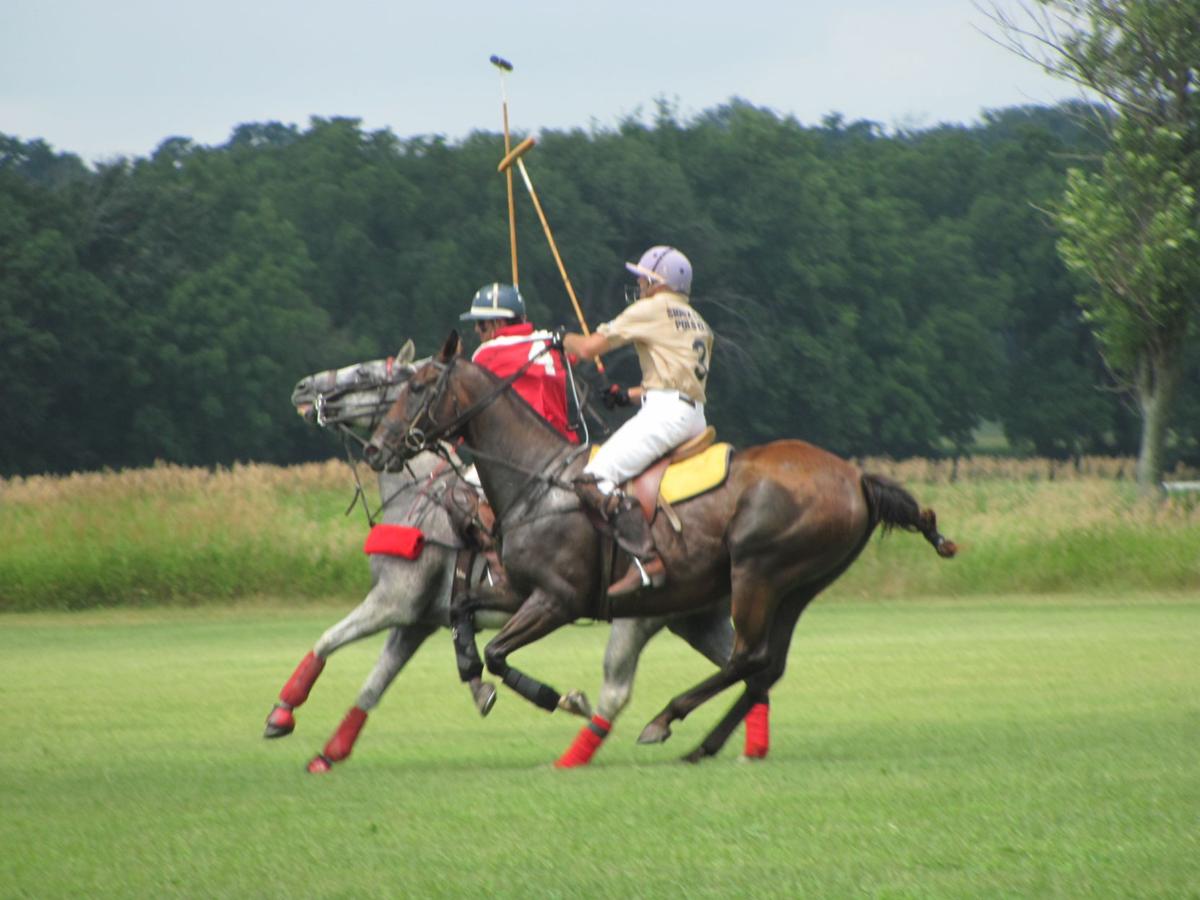 Madison Polo Club beat Sioux Falls 7-3 during a match Sunday at Hickory Knoll Farms in Fitchburg. The Madison player is on the left. 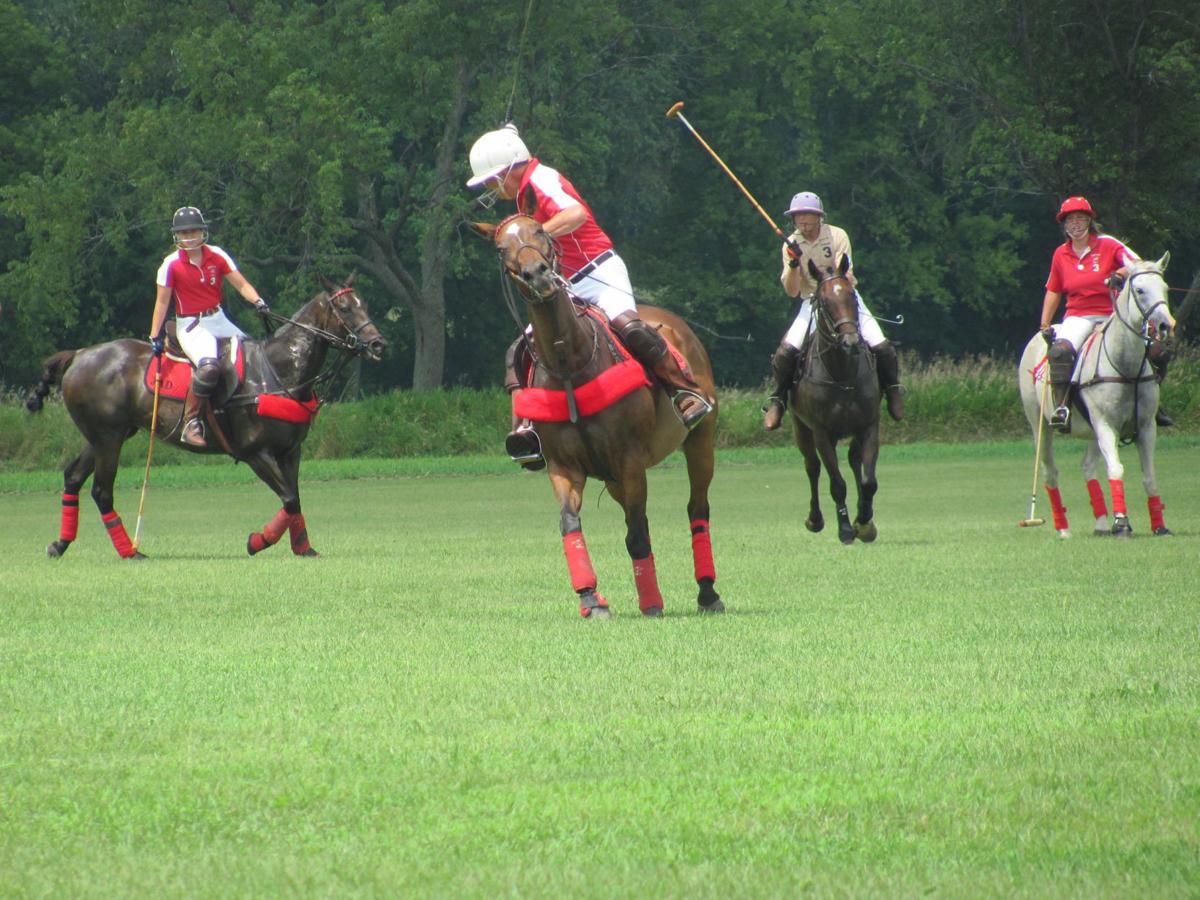 Ruth Dumesic, president of the Madison Polo Club, said the horses have a competitive edge when they play polo. "They have to want to play. That's their job and they like having a job," she said,

Those who play polo locally say the horses seem to enjoy the sport as much as they do.

“The horses are trained to polo. They love the sport as much as we do,” said Amy James, 21, who plays with the 26-year-old Madison Polo Club and is also president of UW-Madison’s club. “They are more like players on their own. They love the game and understand how it works.”

Ruth Dumesic, the Madison Polo Club’s president who owns 10 horses, said for people like her, who love animals, it’s an opportunity to bond with those animals “because the polo horses have to do so many different things and we expect a lot out of them.”

For the Madison Polo Club’s match against Sioux Falls, South Dakota, Sunday at Hickory Knoll Farms in Fitchburg, the 71/2-minute periods — called chukkers — were shortened to 6 minutes because of the heat. Dumesic’s husband, Jim, was among the players. Madison won 8-4.

The club is a nonprofit. Sunday’s match was a benefit for the UW Polo Club and Three Gaits Therapeutic Riding Center, a local organization offering therapeutic horse-riding programs for disabled children, teens and adults. “Using the horse gives them the legs,” Ruth Dumesic said.

Every game is different because many of the players ride different horses and compete under different weather conditions.

“It keeps you sharp,” Dumesic said.

“You form a bond with every polo pony you ride,” she said. “They know you, you know them. And they do their job.”

The Madison Polo Club has eight full-time members and a number of part-timers, many of whom lease horses once or twice a week.

Most members have their own horses, but because the Madison Polo Club is working with UW-Madison’s Polo Club, many of whose members played Sunday, the Dumesics lease their thoroughbred horses for $25 a chukker.

That’s a low price in the world of polo, Dumesic said.

In winter, the clubs play at an indoor venue in Verona. Outdoors, they plays for six periods. Indoors, it’s four.

Dumesic has 10 horses she keeps on her property close to West Towne Mall, which when she moved there in 1986 used to be on the edge of town.

She lives off of Valley View Road and Sugar Maple Lane in Verona and is currently expanding her stable so she can have more horses.

Sunday’s match drew about 250 spectators, some dressing like they were going to the Kentucky Derby, and paying $40 for a chair under a tent that included a catered lunch buffet with champagne. Others tailgated, paying $45 for a carload.

Laura Voll, of Oregon, was among the tailgaters. As a horse owner, she enjoys the sport and said the horses seem to learn the game and have fun playing it.

She can tell because their ears are up and they run toward the ball.

She and the three other women she was with all ride dressage, a form of riding and training where riders perform rehearsed movements in exhibition, competition, or just for the sake of mastery.

Although Dumesic said almost any horse can take to polo, Voll said she would never be able to introduce her horse to the sport, which she said is too athletic.

“My horse is way too fat and lazy to play this game,” she said. “Don’t tell my horse I said that.”

The fireworks will be launched from Breese Stevens Field during a ticketed event with food, drinks and live music.

Burlington teacher who shared misinformation with students, joined Jan 6 Capitol protest back on job in fall

Burlington Area School District officials said Thursday that teacher Jeff Taff did not violate any law or school district policy and that he will be returned to the classroom next fall.

Madison Polo Club beat Sioux Falls 7-3 during a match Sunday at Hickory Knoll Farms in Fitchburg. The Madison player is on the left.

Ruth Dumesic, president of the Madison Polo Club, said the horses have a competitive edge when they play polo. "They have to want to play. That's their job and they like having a job," she said,