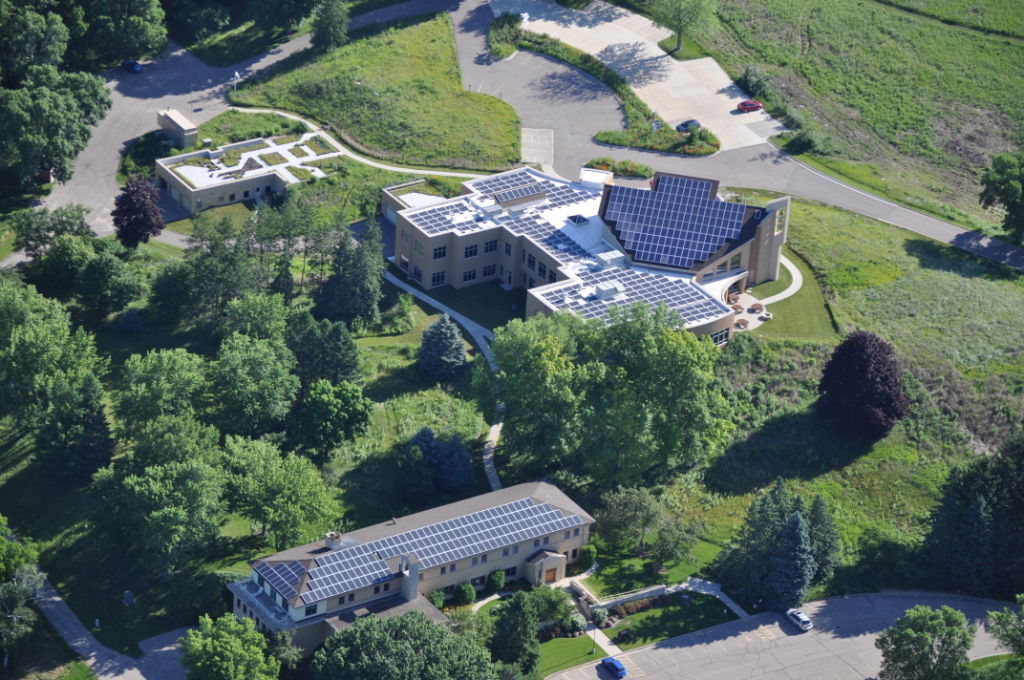 Holy Wisdom Monastery's solar panels can be seen on this aerial photo. About 60 percent of the monastery's energy use is supplied by the sun. 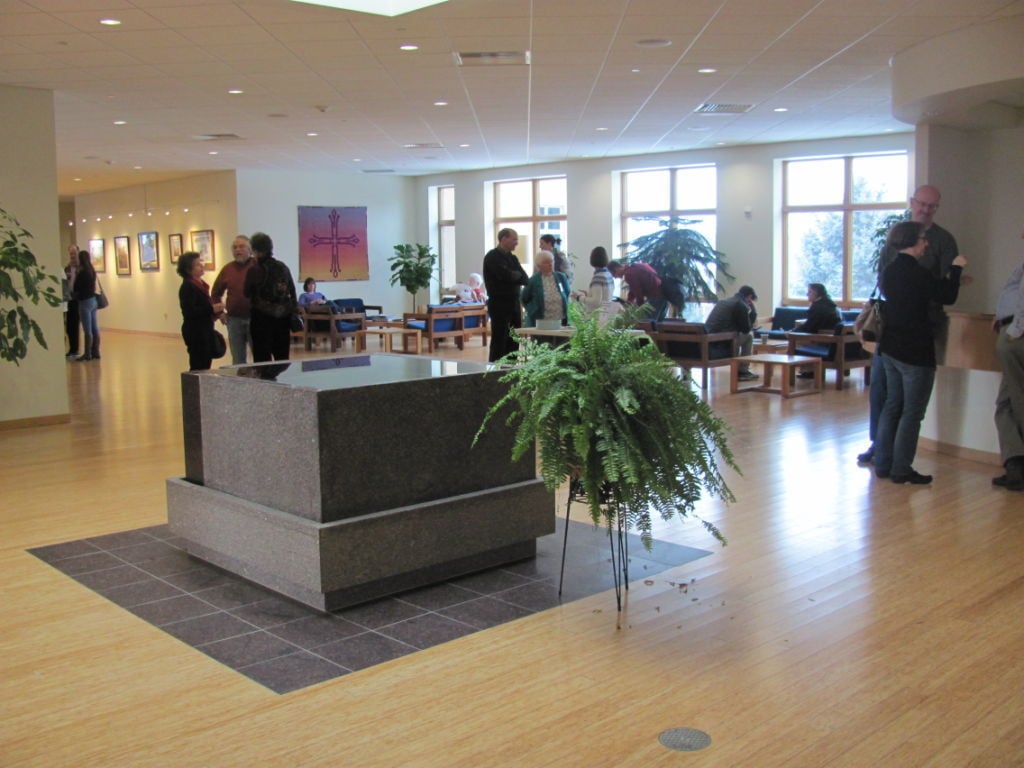 In March 2010, the U.S. Green Building Council awarded Holy Wisdom Monastery the highest level of Leadership in Energy and Environmental Design certification available. The building opened to the public in August 2009. Tours of Holy Wisdom are given monthly.

There are a variety of reasons why people seek out a monastery, said a resident of Holy Wisdom Monastery in the town of Westport, just north of Madison. Mary David Walgenbach, one of four Benedictine sisters who lives in the monastery, ticked off the reasons:

But on Sunday, the reason people came to Holy Wisdom was to tour one of the nation’s most energy-efficient buildings, the construction of which is in keeping with the mission statement of the Benedictine Women of Madison of “weaving prayer, hospitality, justice and care for the Earth into a shared way of life.”

The monastery, built on more than 90 acres of farmland that the sisters are turning into prairie, was the greenest building in the country when it was completed in 2009.

Holy Wisdom was constructed by Appleton-based Hoffman LLC, a design and construction management firm, to achieve Leadership in Energy and Environmental Design (LEED) platinum certification. It received 63 out of a possible 69 LEED points, said Carolyn McGinley, the monastery’s communications director.

“Careful attention was used in the design to bring nature into the building,” said Neal Smith, former executive director of Benedictine Women of Madison for 25 years who now gives monthly tours of the monastery.

Smith led a group of five visitors through the bottom level of the $6 million building Sunday, pointing out its ample collection of windows that capitalize on natural light.

The 34,000-square-foot geothermal building doesn’t use carbon-based fuel, so the sisters’ natural gas bill in summer is about $60, and in winter it’s about $160, he said.

Hoffman designer Catherine Cruickshank, who worked closely on the building with the Benedictine Women, said it was important to the sisters to show leadership by being, living and working in an environmentally responsible way.

“One of the things about our company is that we’re very particular about trying to make green affordable because the general perception is, ‘Oh it would be nice to be green, but it’s so expensive we can’t possibly do it,’ ” Cruickshank said.

“One of the goals of the sisters was to prove if they can do it, anybody can.”

Sister Joanne Kollasch said the monastic sisters have shown concern for the environment since they moved from Iowa in 1953 and opened a now-defunct girls school.

They’ve planted trees, put the land back into prairie and preserved a small glacial lake on the property,

“When we came to build the monastery, we felt the monastery ought to be in harmony with what we had done with the Earth,” Kollasch said.

Walgenbach, the monastery’s prioress, or elected leader, said humans have not been kind to the Earth and are facing repercussions such as climate change and severe weather.

She said the building is a perfect reflection of her community’s values.

Holy Wisdom Monastery's solar panels can be seen on this aerial photo. About 60 percent of the monastery's energy use is supplied by the sun.

In March 2010, the U.S. Green Building Council awarded Holy Wisdom Monastery the highest level of Leadership in Energy and Environmental Design certification available. The building opened to the public in August 2009. Tours of Holy Wisdom are given monthly.