Around Town: Dog-sharing leads to Puparazzo blog
Share this
{{featured_button_text}}
1 of 3 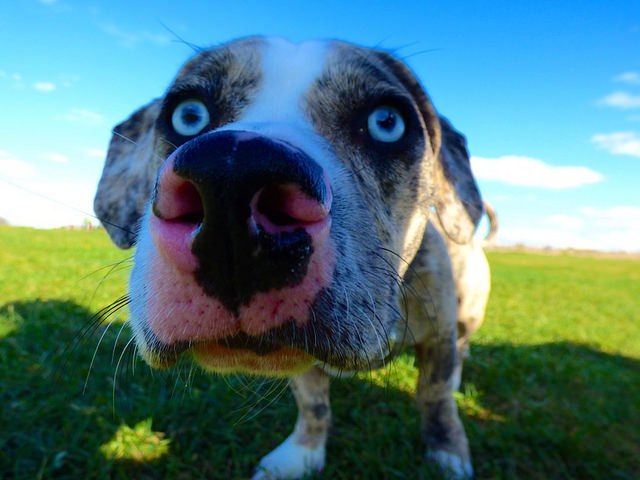 This shot, tilted "Bacon," was taken by Madison's Laurence Meade on Oct. 17 for his blog "The Puparazzo." 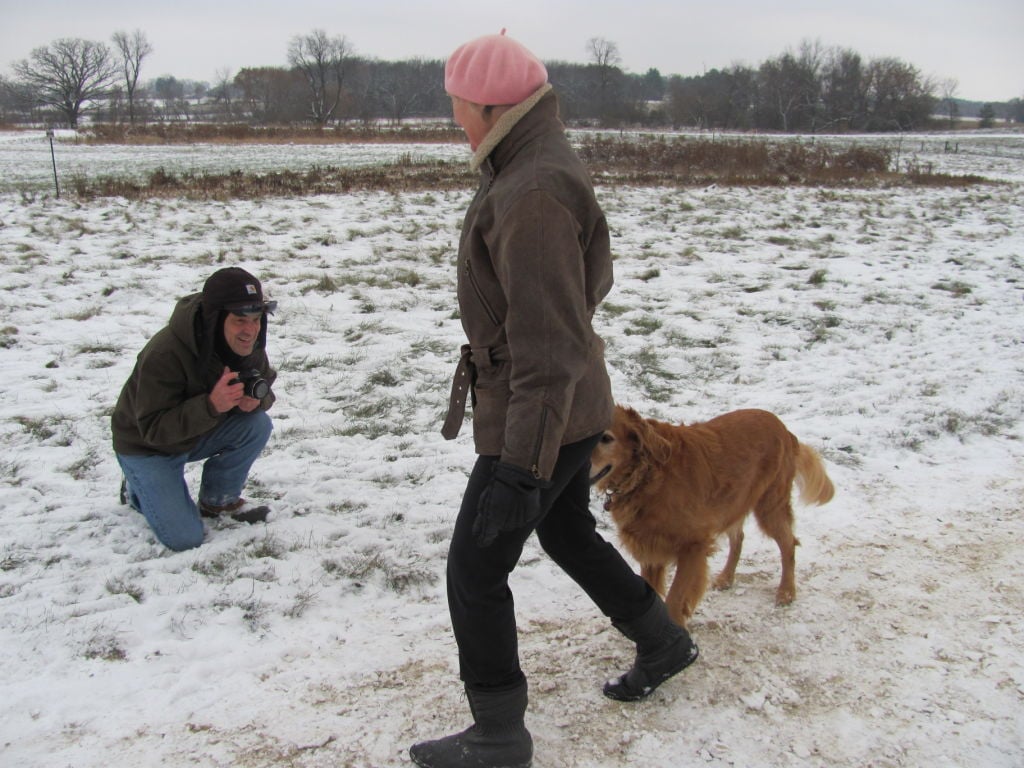 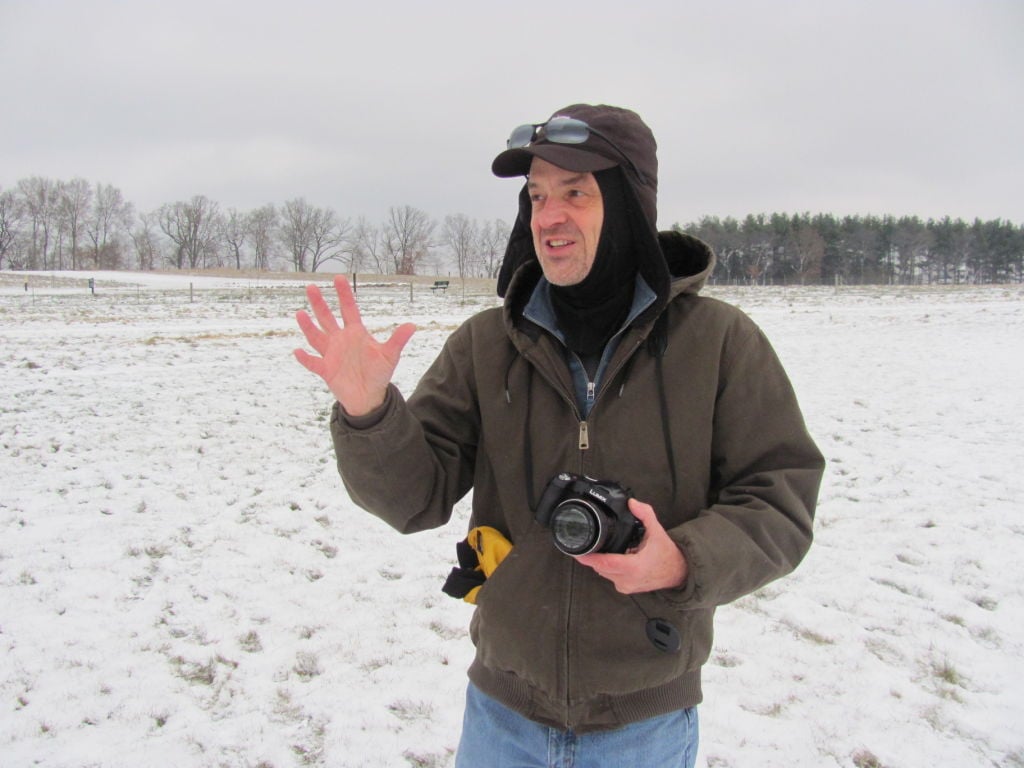 On his blog, The Puparazzo, Laurence Meade posts portraits of dogs he encounters at the Capital Springs dog park. Words are used sparingly. "I like to keep the text minimal and let the pictures tell the story," he said.

Up to five days a week you’ll find Laurence Meade at the dog park on Lake Farm Road, introducing himself to each canine, asking its name, taking its picture, and asking the owner if he might offer an organic dog treat.

A few lucky dogs end up featured on his blog, The Puparazzo.

Funny thing is, Meade doesn’t own a dog. Instead, he brings his neighbors’ 7-year-old black labrador, Zeus, whom he calls his “granddog.”

Meade grew up with dogs. He likes to say he is “seven-dogs old” because each time one dog died, he would always get another. His last, a yellow lab, lived 14 years.

When he lost that dog seven years ago, Meade said he didn’t get another one because of “life circumstances.”

“And then I kind of got used to not having a dog,” said Meade, 60. “At my advanced age it was sort of a nice freedom to have.”

Two years ago, new neighbors moved in behind Meade and his wife, blogger and UW-Madison law professor, Ann Althouse.

When someone left the neighbors’ gate open, Zeus wandered into Meade’s backyard. Meade invited him inside, and with tail wagging, Zeus got a tour of the place.

Eventually, Meade led him back to the neighbors, who with two little kids and another on the way, didn’t notice he was missing.

Zeus has been coming over to visit pretty much every day since. And when Zeus’ owners, Raj Shukla and Tora Frank, go out of town, Meade and Althouse take care of him. Meade has even taken Zeus paddleboarding.

“Laurence is really the person at the center of our dog’s life,” Shukla said. “(Zeus) loves us ... I guess. He would probably save us if we were in trouble — probably. But we know where he wants to go most days. And it’s to be with Laurence.”

Zeus shows up in many Puparazzo (thepuparazzo.blogspot.com) photos. The blog started when Meade began bringing Zeus to the dog park and taking photos on his phone to show his owners how much fun Zeus was having.

Soon he began taking pictures of other dogs. Then he started buying better cameras. Almost a year ago, he started the blog.

It doesn’t have much editorial comment. Mainly it’s just the name of the dog and maybe its breed and age. Sometimes Meade throws in a verse of a poem or lyrics to a song the dog inspires.

Meade, whose background is in landscape design, said he takes 500 shots or more during each visit, with only a few going up on the blog. Meade credits his wife for showing him how to take better photos.

Meade moved to Madison in 2009 from Cincinnati. He met Althouse after being a frequent commenter on her blog. Their courtship was the subject of a 1,000-word New York Times story that year.

As to whether he will ever get his own dog again, Meade doesn’t think so. After a few walks in their University Heights neighborhood, it became clear that Zeus was happy to accompany Meade wherever he goes, his neighbor said.

“We were never sure — is he going to the park, or are they just bingeing on bacon?” Shukla said, laughing. “What is it that is causing this deep affection? But it turns out it’s both.”

The city of Beaver Dam won a case in the Wisconsin court of appeals over whether state laws regulating motor vehicle use infringe on constitutional rights.

The pedestrian killed in a crash Monday afternoon in Sun Prairie that also seriously injured a Madison police officer and another person was identified Wednesday as the officer's wife.

A California man was in Kenosha County Circuit Court Monday after he allegedly argued and tried to fight with local wholesale club outlet employees when they told him that he needed to wear a mask inside the store.

Tuesday was a "very difficult day" for the Madison Police Department following the news, a spokesperson for the department said.

'You will have a death on your hands,' says Illinois man who attacked deputies, authorities say

An Illinois man is facing a felony charge after allegedly threatening to kill a town of Lyndon resident and, once arrested, kicking and attacking sheriff’s deputies.

This shot, tilted "Bacon," was taken by Madison's Laurence Meade on Oct. 17 for his blog "The Puparazzo."

On his blog, The Puparazzo, Laurence Meade posts portraits of dogs he encounters at the Capital Springs dog park. Words are used sparingly. "I like to keep the text minimal and let the pictures tell the story," he said.