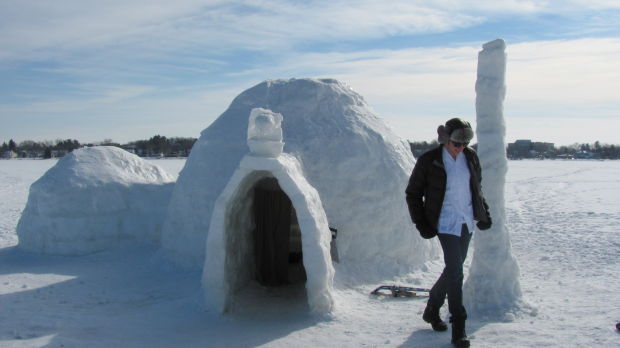 Phil Geiger is one of about eight friends who built a two-chamber igloo on the ice of Lake Monona this winter. He built his first igloo in his hometown of Seattle after a big snowstorm in 2008. 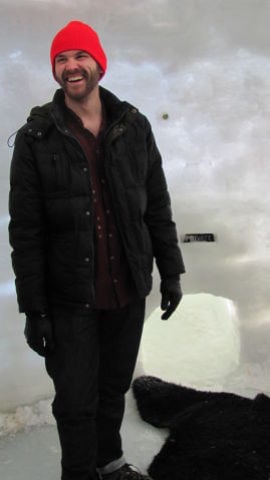 Nolan Johnson, one of the igloo's main architects, stands inside the igloo at the narrow entrance to the secondary chamber, which the friends have dubbed "the love grotto." He dragged out the grotto's faux bear skin rug to show to a visitor. 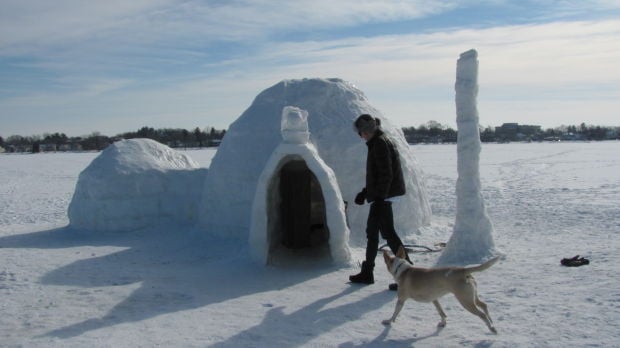 Phil Geiger, who was the project manager of the Lake Monona igloo, approaches the shelter Sunday with his dog Leela. 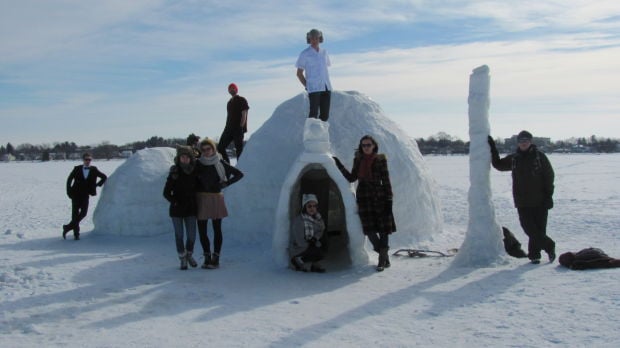 It figures that the winter of the polar vortex spawned a real-life igloo on Monona Bay.

This cold and snowy winter allowed a core group of about eight 20-something friends to build and maintain an igloo, where many of them like to hang out on weekends. They had about 30 people in the igloo Saturday night for a party.

The so-called Lake Monona igloo is out about 150 yards from the Brittingham Park shelter, and its main chamber measures about 15 feet tall by 15 feet wide. A second chamber, dubbed “the love grotto,” has a faux bear skin rug and is about half the size of the main dome.

“A ton of people stopped by while we were building,” said Candace Stohs-Krause, who works for CUNA Mutual. “Cross-country skiers, people walking around, people walking their dogs, people who live on the bay who had seen it from their houses and want to know more.”

She marveled at the footprints in the snow coming from all directions. “It’s like all paths lead to the igloo.”

Members of the group built the original Lake Monona igloo in the winter of 2010-11 in the middle of the lake. They wanted to build another one for the past two years, but nature didn’t cooperate.

“The winters weren’t really conducive for building an igloo out on the lake, with it not being cold enough or having enough snow, either,” said Andrew Conley, whose day job is with the entrepreneurship nonprofit 100state.

The friends moved it to Monona Bay this year because most of the group live Downtown and the new location is easier to get to, said builder Nolan Johnson, who works at Epic Systems.

“Trying to get out in the middle of Lake Monona was ... about a 15-minute walk out there trudging through snow,” Johnson said.

On any given day, 10 to 15 builders assembled the igloo. In total, Johnson said, about 25 people “have gotten their hands wet out there.”

Phil Geiger, who also works at Epic, said they had to modify traditional igloo-building methods because Wisconsin doesn’t have Arctic permafrost.

“We did a lot of research into how the Inuit made igloos and promptly ignored all of that,” he said. “All of the hundreds of years of history. It doesn’t apply.”

In 2008, Geiger built his first, albeit unlikely, igloo in his hometown of Seattle after a big snowstorm, using recycling bins. Madison, he said, was the perfect place to go bigger and better. Key materials this time included big, 17-gallon moving bins.

“That’s how we form our bricks. We shovel snow, and drill a hole in the ice, and scoop water into the moving bins, to form giant slush-ice bricks that we can then cut up and stack,” Geiger said.

Johnson said their next project is to build a 15-foot observation tower connected through the main igloo. The idea is to allow people to climb a spiral staircase and get a better view of Madison.

Stohs-Krause created a Facebook page for the igloo, and the group recently listed it on Airbnb for people to rent out.

“We’re going to get a lot of hits on that for sure,” Geiger said.

Woman arrested in Madison homicide case charged with abetting a felon, not homicide

Police say the woman hid a gun that may have been the murder weapon.

A 13-year-old girl reported being taken from a Southwest Side park and sexually assaulted on Wednesday afternoon, Madison police reported.

A witness said a utility truck was traveling west on Highway CS and ran a stop sign at the intersection with Highway V and hit a car that was turning left onto V.

Police said the woman took no steps to help the man and tried to move his body on a luggage cart.

More than seven months after he was injured, not only is Robert Cobb well on the road to recovery, he’s doing much more than that. He’s living his life.

Badger Bus said leaving a child on a bus is "absolutely unacceptable."

Phil Geiger is one of about eight friends who built a two-chamber igloo on the ice of Lake Monona this winter. He built his first igloo in his hometown of Seattle after a big snowstorm in 2008.

Nolan Johnson, one of the igloo's main architects, stands inside the igloo at the narrow entrance to the secondary chamber, which the friends have dubbed "the love grotto." He dragged out the grotto's faux bear skin rug to show to a visitor.

Phil Geiger, who was the project manager of the Lake Monona igloo, approaches the shelter Sunday with his dog Leela.