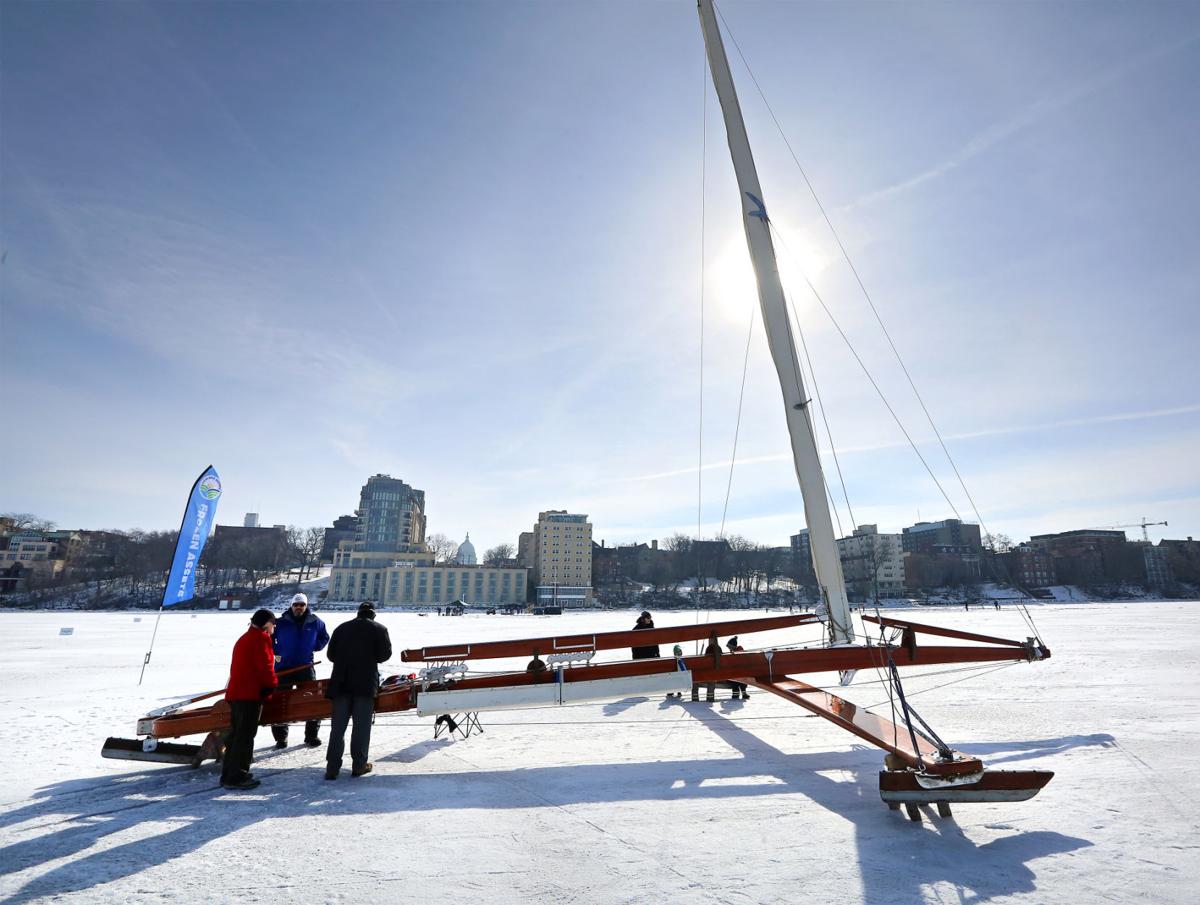 The Mary B, an iceboat built in Madison in the late 1940s, drew the interest of visitors to the Frozen Assets Festival on Lake Mendota last month. The historic boat had been in storage for the past 15 years, and efforts are underway to restore it to make it race-worthy by next winter. 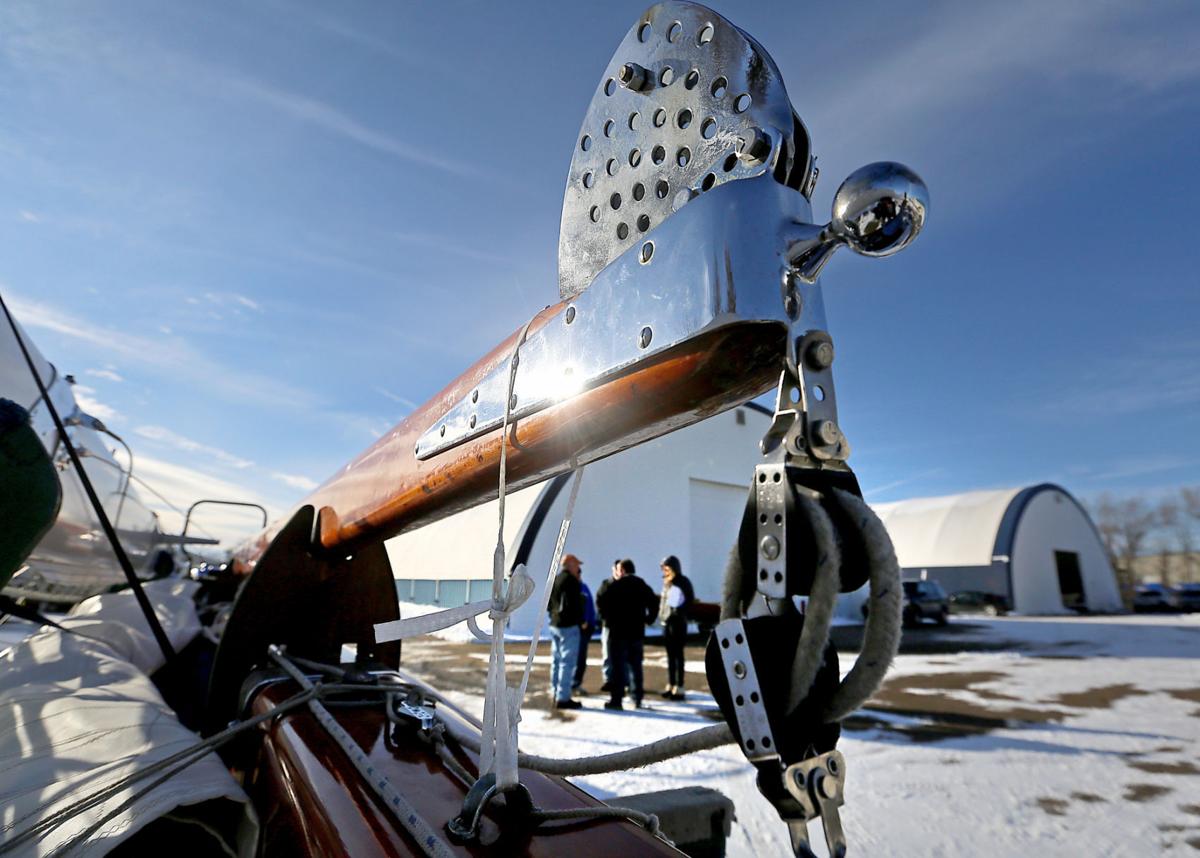 Hand-crafted steel and wood components made from Sitka spruce highlight the craftsmanship of the Mary B, a 1940s-era iceboat. The vessel was built at the Bernard Boat House at what is now James Madison Park.

TOWN OF WESTPORT — When the Mary B skimmed across the ice of lakes Monona and Mendota in the early 1950s, she shared her exploits in the Wisconsin State Journal sports pages with the University of Wisconsin boxing team, three-time NCAA champion Don Gehr-mann’s ability to run the mile for the Badgers and basketball games at Central High School.

The 39-foot-long iceboat could fly across frozen waters at nearly 100 mph, won numerous prestigious regattas in the heyday of the sport and is a quintessential part of Madison’s history and our connection to water, even in the depths of winter.

The Mary B, made with Sitka spruce, was a rock star before the arrival of Chuck Berry and Elvis Presley, but has come out of retirement after nearly 15 years of storage in a Waukesha County barn.

The boat made an appearance at the Frozen Assets Festival in front of the Edgewater Hotel last month on Lake Mendota and a few weeks later even sailed for a bit on Lake Monona. The plan is to get her back in the game to compete not only on home ice but on lakes Winnebago, Big Green, Geneva and beyond.

“It’s a very important, prominent part of the iceboating history of Madison and this (boat) wound up being on top of the heap until the smaller boats came in which were smaller and used modern materials,” said Jerry Simon, an iceboat builder who has been involved with the sport for nearly 60 years. “This was the best of the big boats.”

The Mary B, considered a stern-steerer boat, has a 40-foot-tall mast that holds 360 square feet of sail. She is a yacht among skiffs, and a mobile, historic and highly-decorated treasure of the hard water.

And now, the Four Lakes Ice Yacht Club in Madison is working on a plan to raise $40,000 to make the boat race-ready. The costs include about $5,000 in restoration work, the purchase of a $12,000 enclosed trailer in which to store and transport the boat, and another $15,000 to buy the iceboat from Don Anderson, owner of The Boathouse of Madison, who rescued the iceboat from storage.

“It was in a pretty dilapidated building but it was in really good shape,” said club member Peter Fauerbach, whose family has been involved with the sport since the early 1900s. “There were some rodents that got in and made a nest in one of the sails, so it’s not pretty, but we think we can get those back into pretty good shape. The wood was fantastic.”

And so is the boat’s history.

It was in the late 1940s that O.T. Havey, a Madison electrician, commissioned Frank Tetzlaff and Carl Bernard to build an iceboat that he would name after his wife.

But the boat would have never been built had Havey not learned how to swim in Token Creek near the family farm in the town of Windsor.

After graduating from DeForest High School, Havey got a job as an apprentice wireman for the Western Electric Company in Chicago. In 1915, the company’s annual picnic was scheduled to be held in Michigan City, Indiana, so the company chartered five steamer ships to transport 7,000 employees and their families down the Chicago River and across southern Lake Michigan.

Havey, then 21, was aboard the Eastland that was overloaded with 2,500 people. The steamer capsized in the river and 800 people died. Havey saved a 4-year-old girl before being picked up by a tugboat. His future wife, Mary, also an employee of the company, but who had not yet met O.T., watched the tragedy unfold from shore.

O.T. Havey later moved to Detroit before serving in World War I. After the war, he returned to Madison, where he was the long-time owner of the O.T. Havey Electric Co. His success in electrical work allowed him to spare no expense on the $9,000 iceboat.

Tetzlaff was a master carpenter who helped translate some of Frank Lloyd Wright’s plans for the construction of the Unitarian Meeting House on University Bay Drive that was completed in 1951.

Bernard grew up on Gorham Street along Lake Mendota where his grandfather, who came to Madison in 1837 and had been building iceboats since the 1850s, started a boat livery business in 1874.

The Bernard Boat Livery offered tours of Lake Mendota aboard boats that could hold up to 100 people. The livery also built and rented boats during open water and in 1940 had a fleet of 27 iceboats that it rented during the winter.

Despite the qualifications of Carl Bernard and Tetzlaff, who about 10 years earlier had built another well known iceboat, the Fritz, it took the men three years to build the Mary B. Their workspace was the Bernard Boathouse that is now part of James Madison Park.

Deb Whitehorse, whose father built iceboats in the basement of their Monona home, is a member of the Four Lakes Ice Yacht Club, where she organizes races and events and writes about the sport’s history. She said wood for the Mary B was purchased by Tetzlaff at the nearby Marling Lumber Co.

“He picked out all of the best wood from a car load of Sitka and you can see that now in the care he took,” Whitehorse said as she looked over the Mary B. “There’s just so much Madison in this boat.”

O.T. Havey didn’t race the boat. He left that up to skippers Carl Bernard, and later, James Payton. The duo combined to win 13 major regattas between 1949 and 1964. It won the Randolph Hearst Cup four times in the 1950s.

Henry J. McCormick of the Wisconsin State Journal wrote about the 1954 race in which the Fritz beat the Mary B.

“The Fritz handled the light wind and the troublesome ice the way Fred Astaire handles a slippery dance floor,” McCormick wrote. “Owner O.T. Havey’s Mary B was as pretty as a girl in her first formal, and skipper Carl Bernard sailed her with the calm assurance of a fellow who knew he had the best date at the party.”

The Mary B last raced in 1992 and in 2000 was on display at the Strictly Sail Boat Show in Chicago before being wrapped in canvas tarps and going into storage.

The boat’s hull weighs 600 pounds and her 26-foot-long runner plank, which balances the boat, is 400 pounds. But if the creation of a non-profit is successful, money is raised and the restoration completed, the Mary B may once again vie for a trophy.

“This is probably one of the most famous iceboats that nobody knows about,” Anderson said. “It’s just been sitting in storage for years. There’s a lot of history there but now we want to win races and be competitive.”

Get a look at the Mary B ice boat in action with a video from 1992 at www.madison.com

Al Felly died in January and left his mark on Madison, Mineral Point and Belize.

Craig Deller is cleaning the cast iron bell salvaged from a November fire at Cornerstone Church in Spring Green.

A bridge and spray paint resonates in the North Woods

A small Wisconsin brewery buys 2 others

An ice cave in an El Niño winter

The Iceman outduels a warm winter and rebounds from the collapse last year of his man-made ice structure.

On Wisconsin: Letters from Bart Starr form respect and admiration

The Mary B, an iceboat built in Madison in the late 1940s, drew the interest of visitors to the Frozen Assets Festival on Lake Mendota last month. The historic boat had been in storage for the past 15 years, and efforts are underway to restore it to make it race-worthy by next winter. 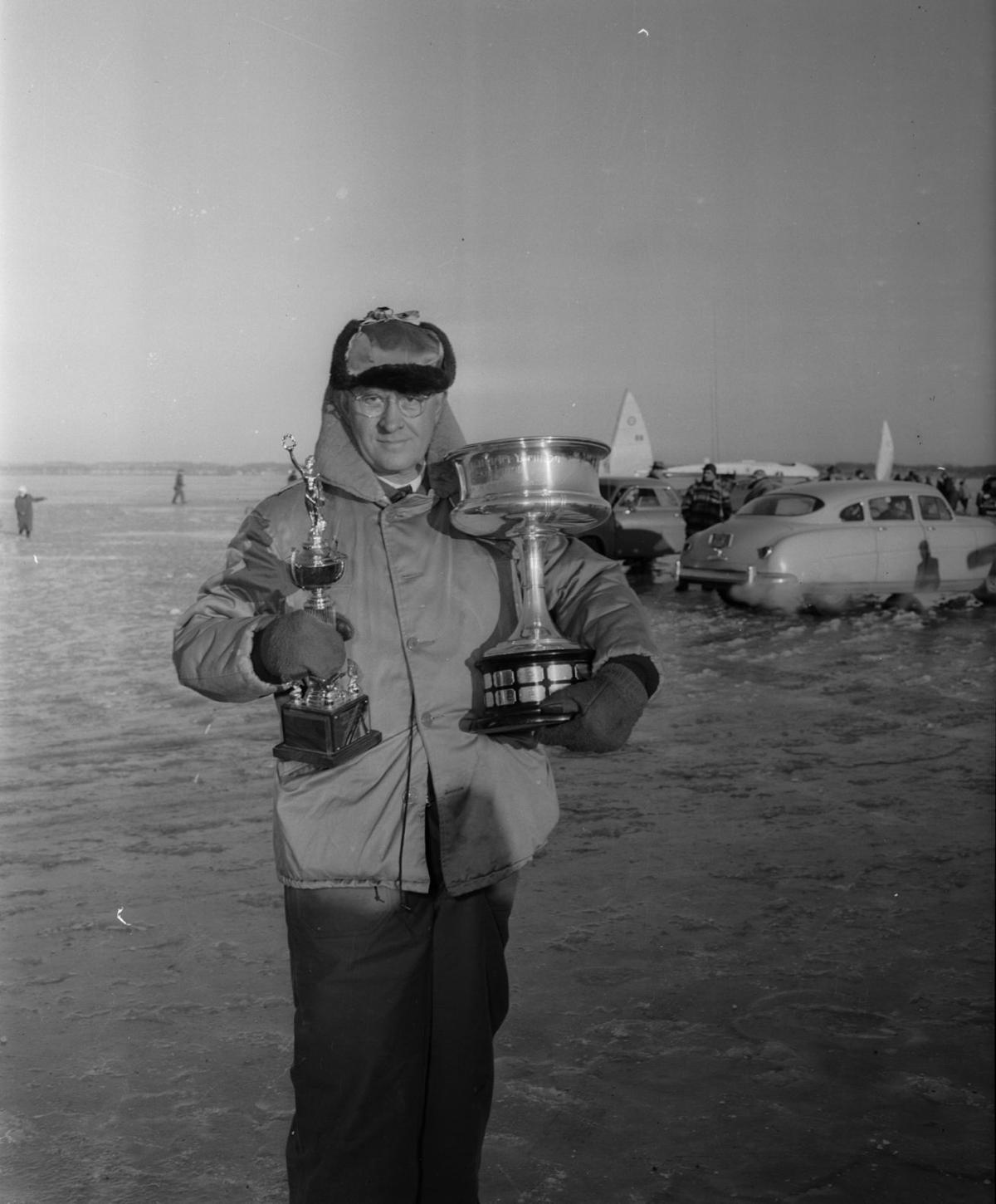 O.T. Havey holds trophies his Mary B won during the 1952 Class A Championship in the Northwestern Ice Yachting Association ice regatta on Lake Monona. Havey commissioned to have the boat built, but had others captain the vessel during competitions. 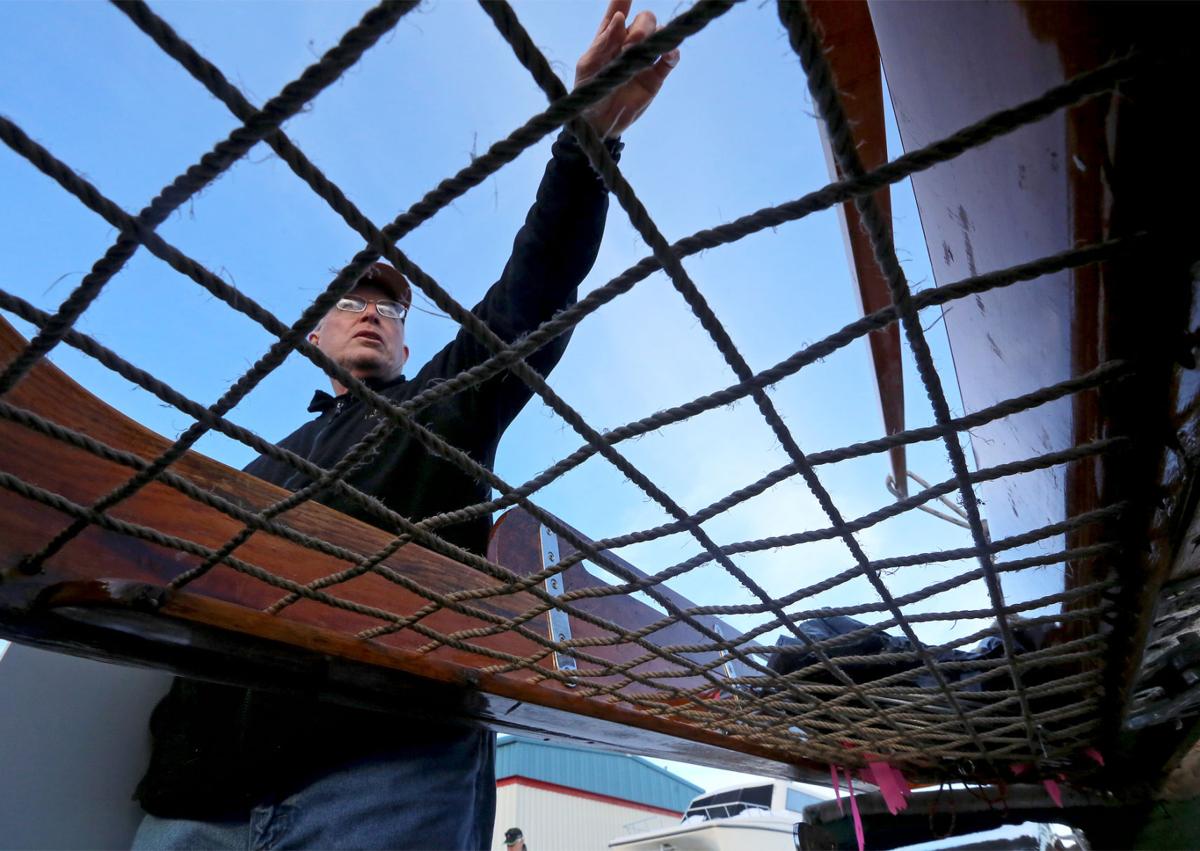 Peter Fauerbach, a member of the Four Lakes Ice Yacht Club, is seen through the rope mesh crew cab of the Mary B ice boat. The 39-foot-long boat with a 40-foot tall mast is stored at The Boathouse of Madison in the town of Westport and could be restored in time for next winter's racing season.

Hand-crafted steel and wood components made from Sitka spruce highlight the craftsmanship of the Mary B, a 1940s-era iceboat. The vessel was built at the Bernard Boat House at what is now James Madison Park. 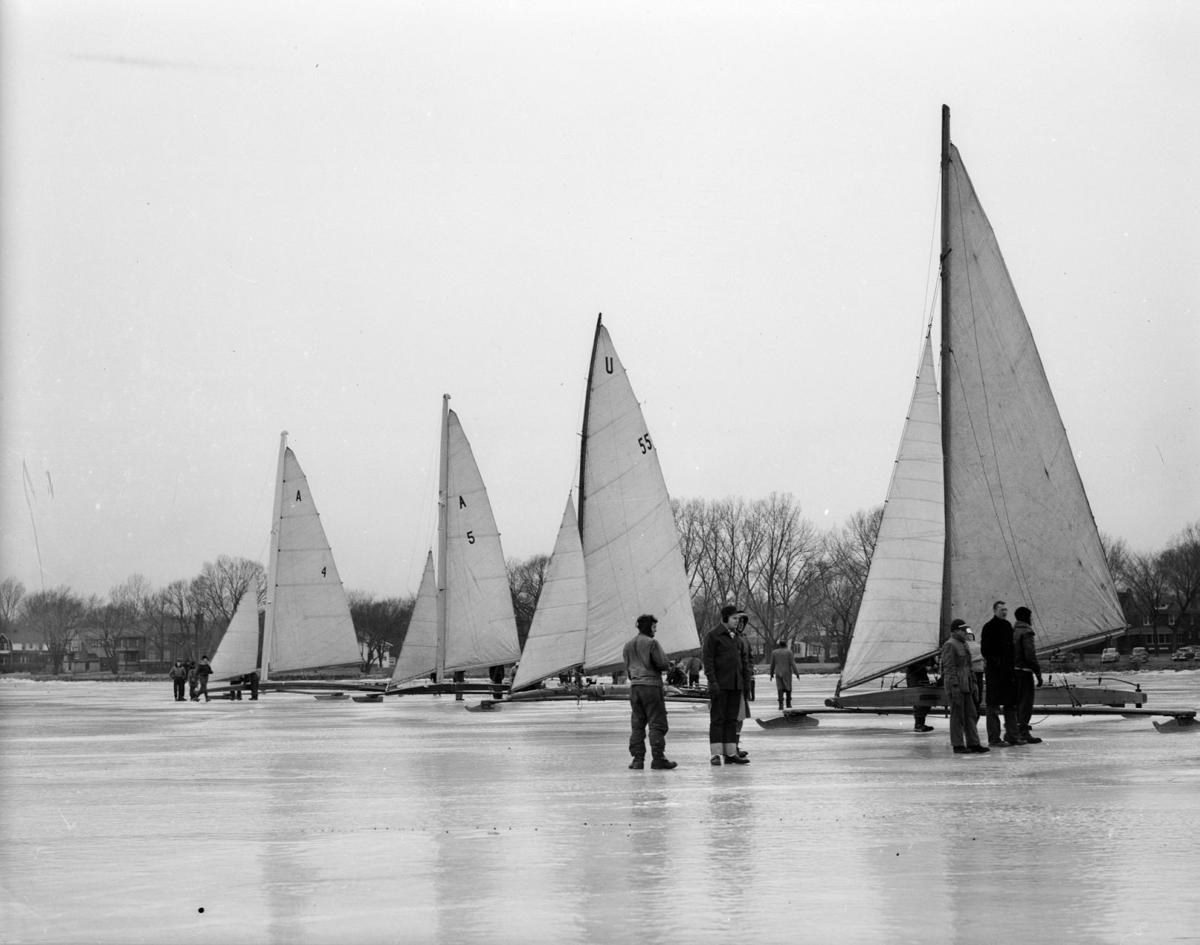 Iceboats line up on Lake Monona for the Hearst Trophy Iceboat Race during the 1950s. From left are Madison iceboats the Fritz and Mary B and Oshkosh iceboats the Penguin and Flying Dutchman. 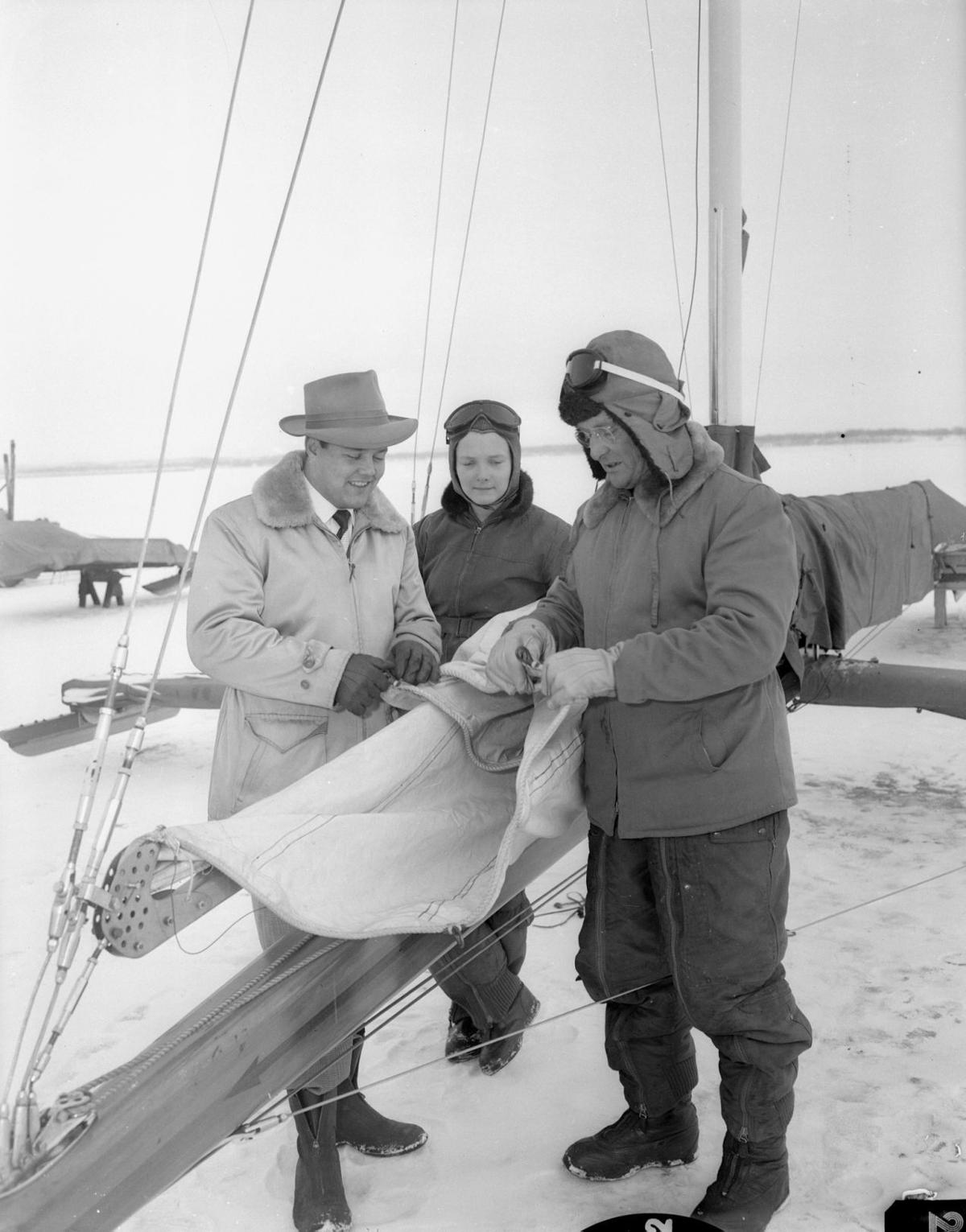 Examining the sails of the Mary B in a photo likely from the 1950s are, from left, Jim Lunder, Mary Ann Bernard and Carl Bernard. Carl Bernard helped build the boat along with Frank Tetzlaff. 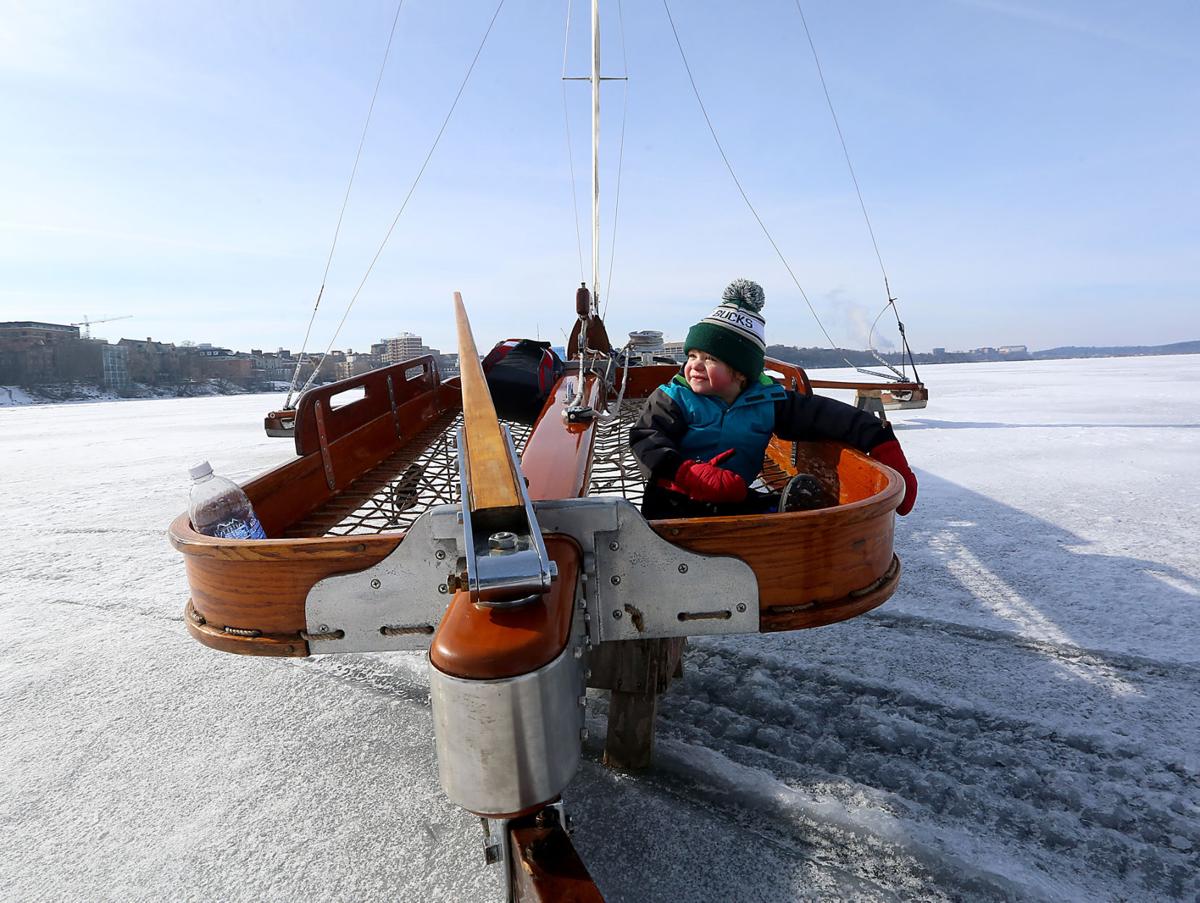 Henry Winterhack, 1, of Madison, explores the crew chair of the Mary B ice boat during a visit last month to the Frozen Assets Festival on Lake Mendota. Typically four people can ride in the compartment. Most ice boats are for a single person. 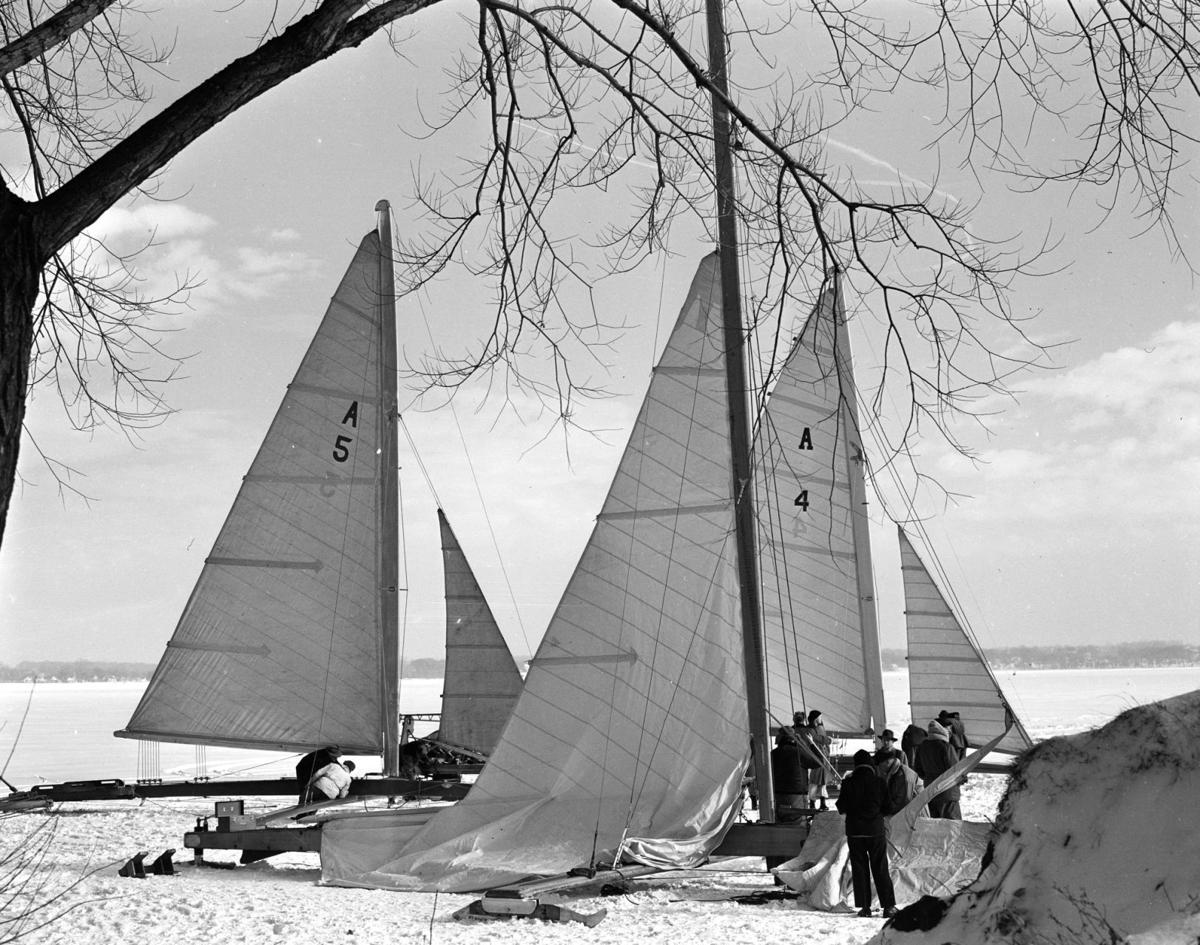 Iceboats prepare to race in the Hearst Cup Challenge on Lake Monona in this image likey from the 1950s. From left are the Fritz, Mary B and Dutchman.