In a world where museum pieces are meant to be seen, studied and enjoyed, but not touched, Craig Deller has been allowed to place his hands on history.

The Smithsonian-trained conservator has worked on stagecoaches at the Museum of Science and Industry in Chicago, furniture in Abraham Lincoln’s home in Springfield, Illinois, and the fountains on the Capitol Square in Madison.

One of Deller’s signature pieces from his more than 30-year career was his work in 1999 at the Adler Planetarium in Chicago on the 22-foot-long Dearborn Telescope. Deller identified the coatings on the tube of the telescope that was built by Alvan Clark in 1864 from poplar and then covered with a walnut veneer. Deller used his careful techniques to remove years of varnish that had turned the tube black. The telescope, its wood grains clearly visible, is now a centerpiece of the planetarium’s telescope collection.

Deller’s latest project is in his cramped one-car garage just off Midvale Boulevard amid his lawnmower, garden tools and bicycles that hang from the ceiling. It’s also being done pro bono in an effort to help the congregation of Cornerstone Church in Spring Green hang on to a piece of its historic past following a devastating fire.

Ideally, Deller works in his basement in a shop filled with brushes, small hand tools, squeeze bottles of liquid solutions, humidifiers, microscopes, overhead lights and magnifying glasses. But lugging a 600-pound, soot-covered cast-iron bell down the narrow basement steps would have been impossible.

“It’s in very good shape, actually,” Deller, 62, said of the bell manufactured by the Cincinnati Bell Foundry sometime between 1890 and 1930. “There’s no fractures (and) nothing really structurally wrong with it. Our job is to clean it up and preserve it so the congregation can enjoy it.”

The cause of the fire isn’t suspicious but hasn’t been determined. One thought is that equipment being used in the restoration of the church’s wood floors at the time of the blaze may have overheated a junction box in the downstairs and caused an electrical fire, said Derek Miller, the church’s pastor since 1999.

Regardless of the cause, virtually everything was lost. The exception is a few dozen bricks, the bell and a 6-foot by 4-foot stained-glass window that had been over the church’s main entrance. It is being restored by Lighthouse Glass in Madison.

When a photo of the bell that had been lifted from the rubble by a backhoe with a chain appeared in the Wisconsin State Journal a week after the fire, Deller reached out to offer his services. The plan is for the bell to be on display as part of the landscaping of the new church facility, which will face south instead of east. The bell will be placed below where it hung for decades.

“For the community it means a lot,” Miller said of the bell’s return. “It’s sort of a treasure and emblematic of the congregation in some ways.”

The church’s mission statement is “Setting Hearts on Fire.” The church’s logo is in the shape of a flame being held by someone reaching up.

Services are being held in a building at 102 S. Washington St., which was once home to the Post Office and later an artist studio. There is space for about 75 parishioners, but new digs are on the way.

The church has about $800,000 in insurance money to rebuild, but the latest design has a price tag of about $1.1 million. Efforts are underway to bridge the gap to pay for the one story, 8,400-square-foot facility by raising more money, looking for grants and cutting back on some of the design. If construction can start in May, the building could be ready for services by Thanksgiving.

“For our church, the grieving itself was the hardest process,” Miller said. “Just the upset of going through (the fire) was very, very difficult.”

But the community and other churches from outside Spring Green responded.

The largest donations have come from the congregation at Spring Green Community Church, home to the former Congregationalists who sold the church to Cornerstone in 2003. On Easter Sunday, the Community Church collected $2,700 and the following Sunday another $795. The church’s pastor is Kendall Harger, who is a neighbor of Miller on Cincinnati Street.

“A lot of our people were married there and went to church there for a lot of years so there’s a connection there,” Harger said. “It was a beautiful old building, and they had done so much to renovate it.”

For Deller, the bell project is a continuation of a life that has involved all things history.

His father was an executive at Prudential but also a frustrated artist who fixed and restored old furniture. Craig Deller graduated from Southern Illinois University with a communications degree, but he and his father incorporated in 1982 what is now Deller Conservation. Deller’s father died a year later, but at about the same time Craig discovered the American Institute for the Conservation of Historic and Artistic Works, the national organization for conservators.

“That changed my life,” Deller said. “It was my world. These are my people.”

He studied at the Smithsonian Institution’s Conservation Analytical Laboratory for three years and in 1993 he was elected as a professional associate by the AIC. In 2015, Deller reached the top level of conservator and was named a fellow.

Deller is the former president of the Chicago Area Conservation Group, is on the board of directors of the Madison Trust for Historic Preservation and he teaches conservation techniques every Friday in the graduate program at the School of the Art Institute of Chicago.

Deller had been based in Geneva, Illinois, where he had a 5,000-square-foot studio, but the 2008 recession killed his business. He moved to Madison in 2014 to be closer to family and now operates out of his house just north of the Beltline.

The bell, and an engine hoist to maneuver the piece, was delivered to his garage by a church parishioner last Monday. Deller began working on the bell on Thursday when he used a stiff nylon brush and a vacuum cleaner to remove dirt and other debris from about a one-foot section of the bell’s bracket. That was followed by a handheld steam cleaner and a toothbrush to gently scrub the area before it was dried with a heat gun.

Once cleaned, which will take about three weeks, Deller will cover the bell and the bracket with a combination of beeswax, candelilla wax and carnauba wax that is dyed black. The wax mixture will help protect the bell from the elements and give it a uniform look.

To learn more about Craig Dellers, go to a video at www.madison.com.

To hear an interview with Dellers, search iTunes for the Wisconsin Stories podcast.

Mementos from Uncle Rodney amid concerns of rail safety

Wisconsin Red Worms sells worms for composting to customers around the country.

On Wisconsin: Janesville begins to reveal its past for the future

A flood of development in the city's downtown is designed to draw more residents, businesses and workers.

On Wisconsin: Four classrooms, 150 years and a small school that binds a farming community

St. Peter's Catholic School in Ashton celebrates 150 years with a reunion that celebrates its rural roots.

Herman the Duck to return to Wisconsin

A DC-3 that once flew in the North Central Airlines fleet will be one of the signature pieces of a new exhibit at the Wisconsin Aviation Heritage Center in Sheboygan Falls.

A Spring Green church building constructed in 1868 is lost but the congregation moves forward.

Al Felly died in January and left his mark on Madison, Mineral Point and Belize.

Wisconsin cheesemakers again have their whey at Worlds

It may seem hard to believe, but Wisconsin-made Colby, Muenster, Gouda and many other cheeses are getting better.

From farm to distillery to barrel to bottle for J. Henry & Sons bourbon

J. Henry & Sons grows the grains for its bourbon, which is made in New Richmond but aged in northern Dane County.

A bridge and spray paint resonates in the North Woods 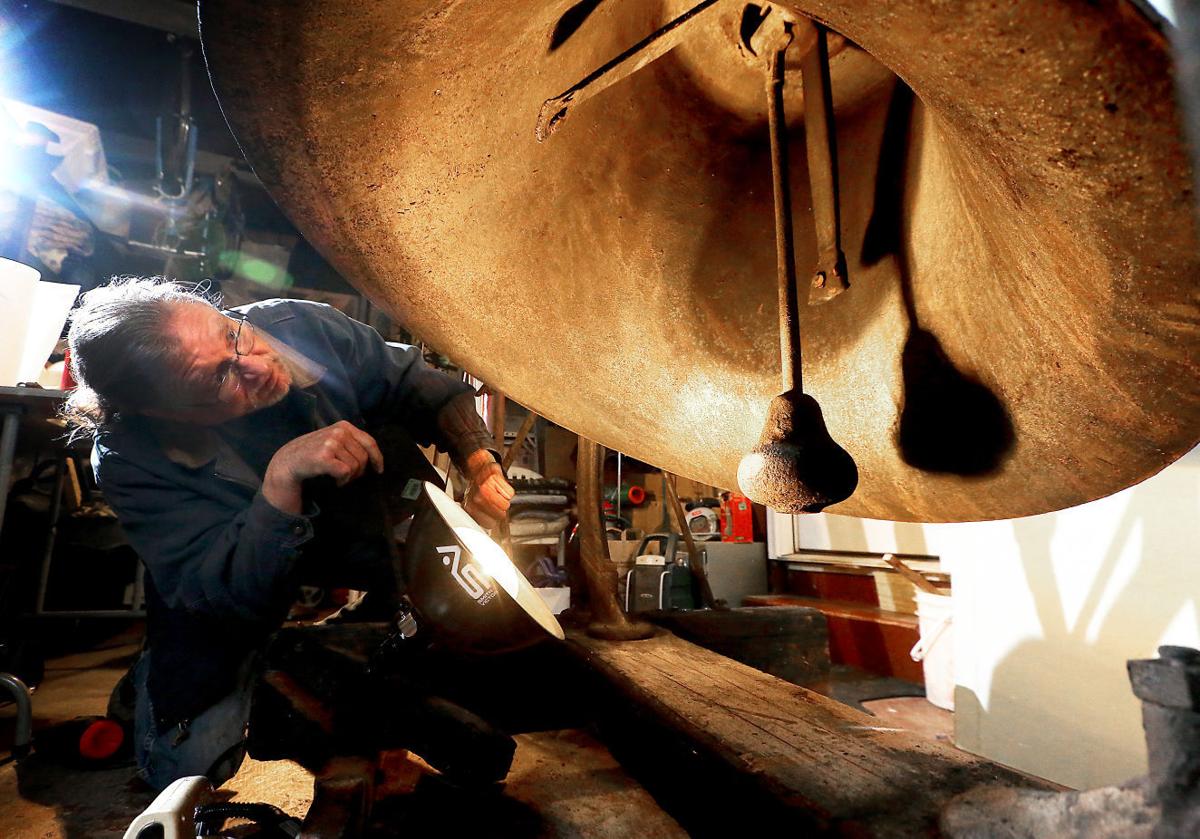 Craig Deller, a Madison-based conservator, works on a bell pulled from the ruins of a November 2015 fire at Cornerstone Church in Spring Green. The bell can still be rung and was cleaned pro-bono by Deller. The bell will be installed as part of a landscaping project outside the church this spring. 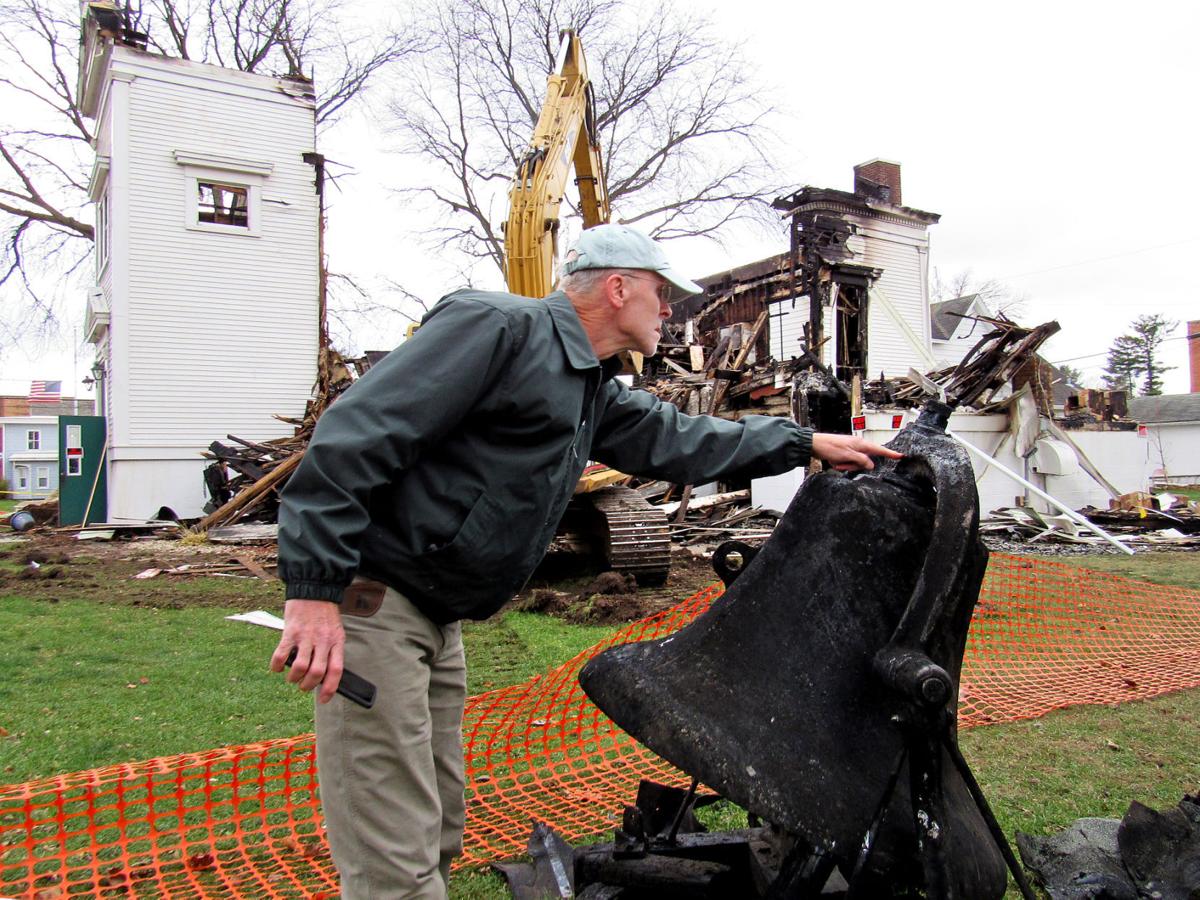 Matt Faultersack, a member of Cornerstone Church in Spring Green, looks over the church’s bell that was retrieved in November 2015 days after a fire destroyed the historic church. 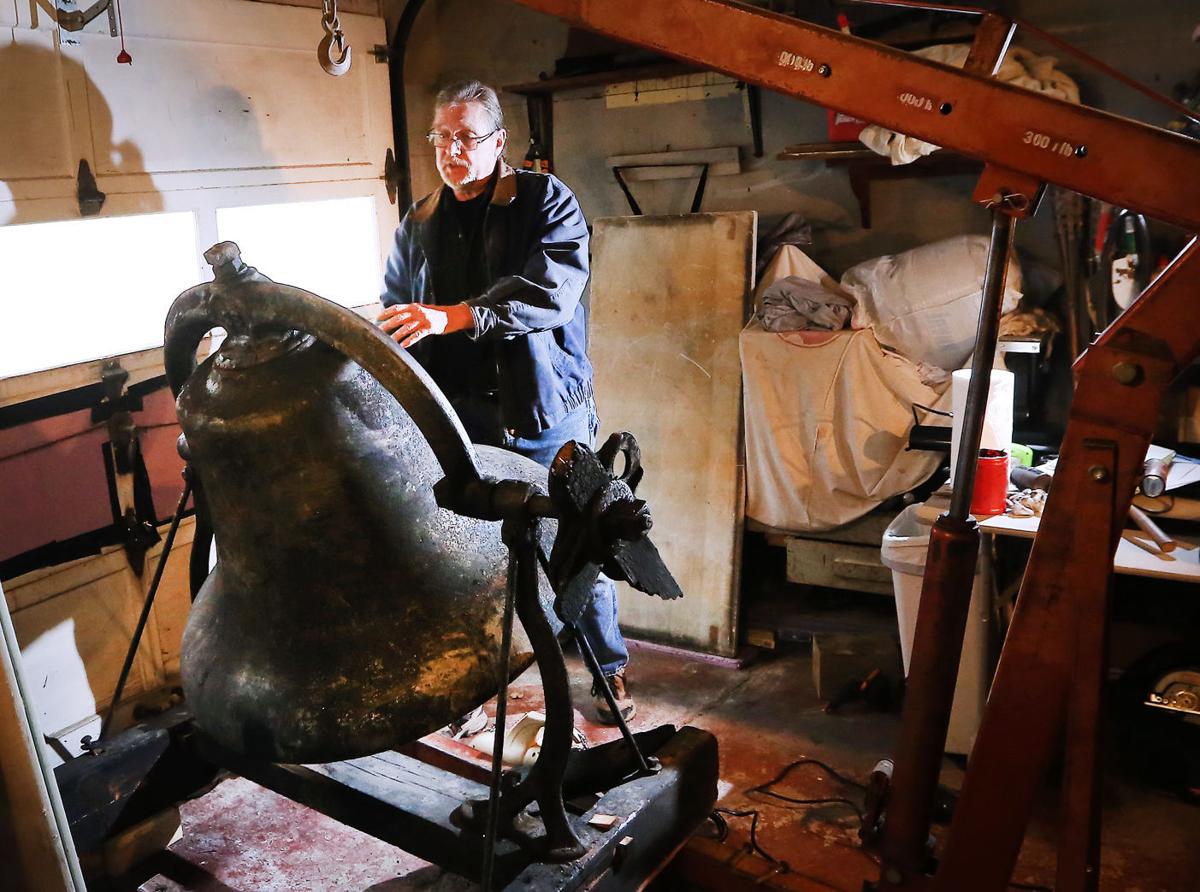 Craig Deller works in his Madison garage and has the assistance of an engine hoist on the 600-ound, cast iron bell. Deller typically works in his basement but the bell, from Cornerstone Church in Spring Green, was too big to fit down his basement steps. 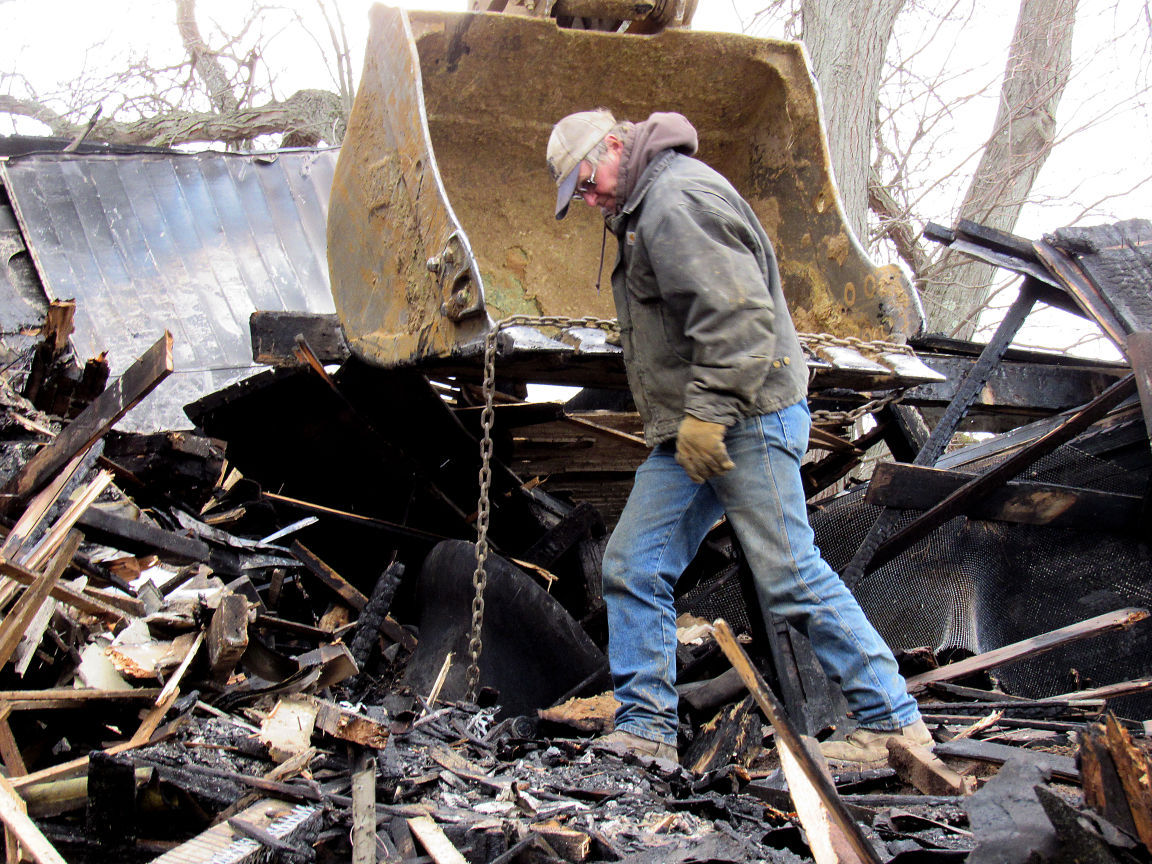 Matt Ottesen of Carl Oman Site Excavation walks through the rubble of Cornerstone Church after attaching a chain to the church’s bell that fell from the steeple during a Nov. 14 fire. 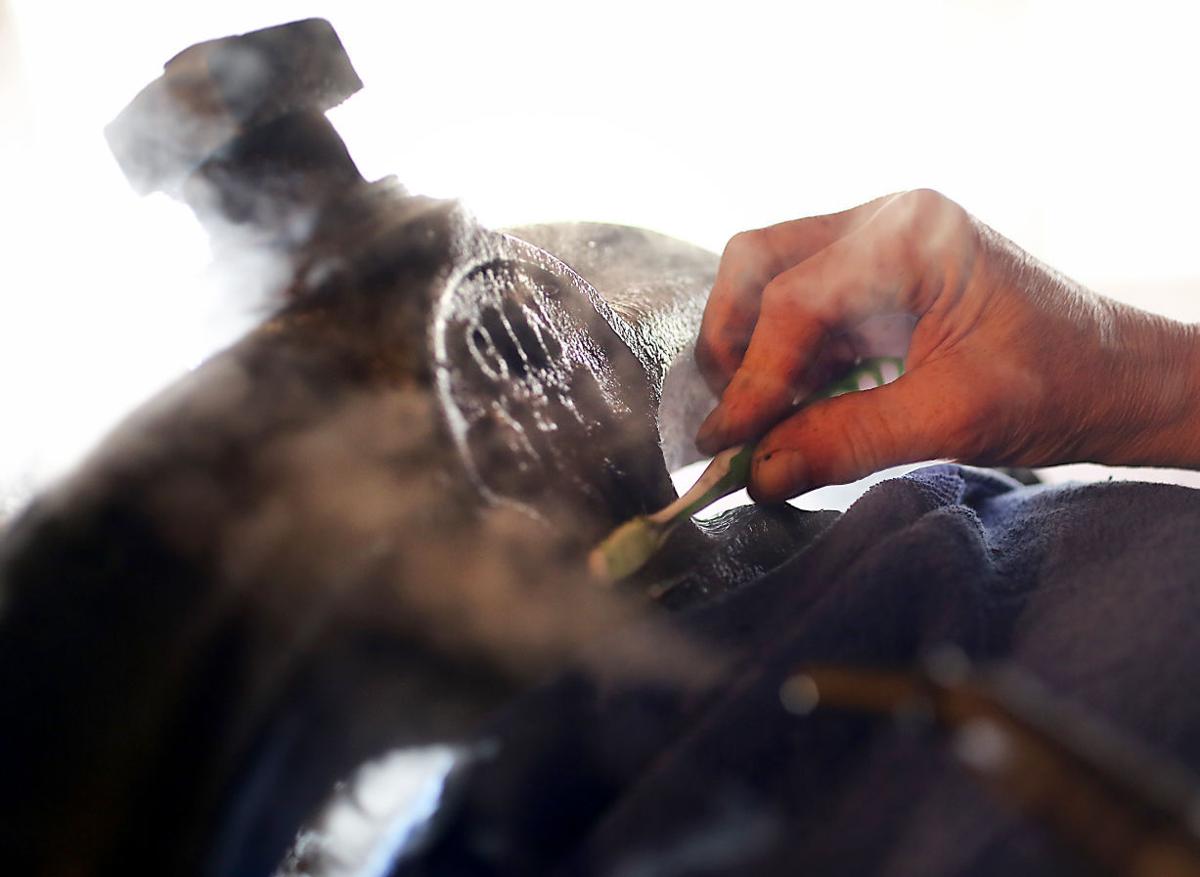 Craig Deller uses a steam cleaner and a tooth brush to gently remove dirt and debris from the cast iron bell. Once cleaned, a black wax coating will be applied to protect the bell and give it a uniform look. 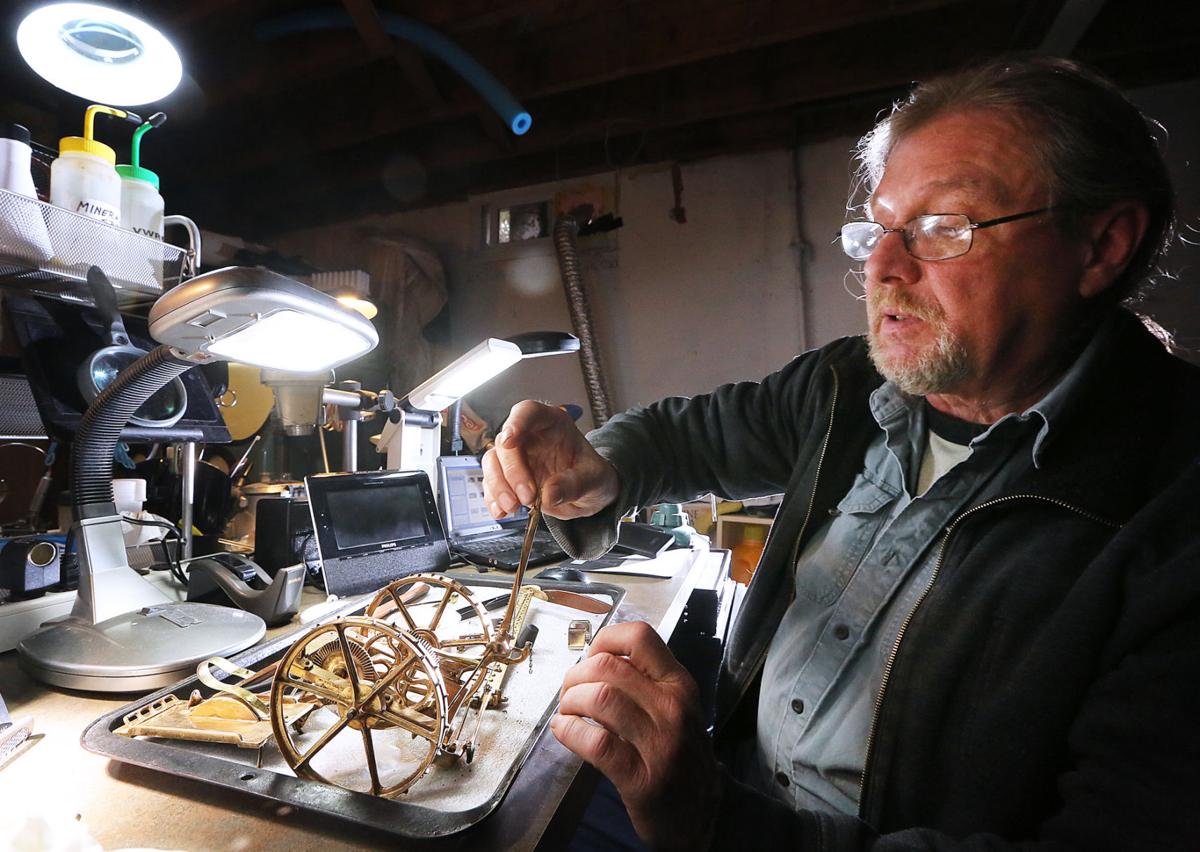 Craig Deller's work is varied. Besides the bell from Cornerstone Church, Deller is working in his basement shop on conserving a working model of a mower used to obtain a patent by McCormick Farm Equipment. The model is now part of the collection of the Wisconsin Historical Society. 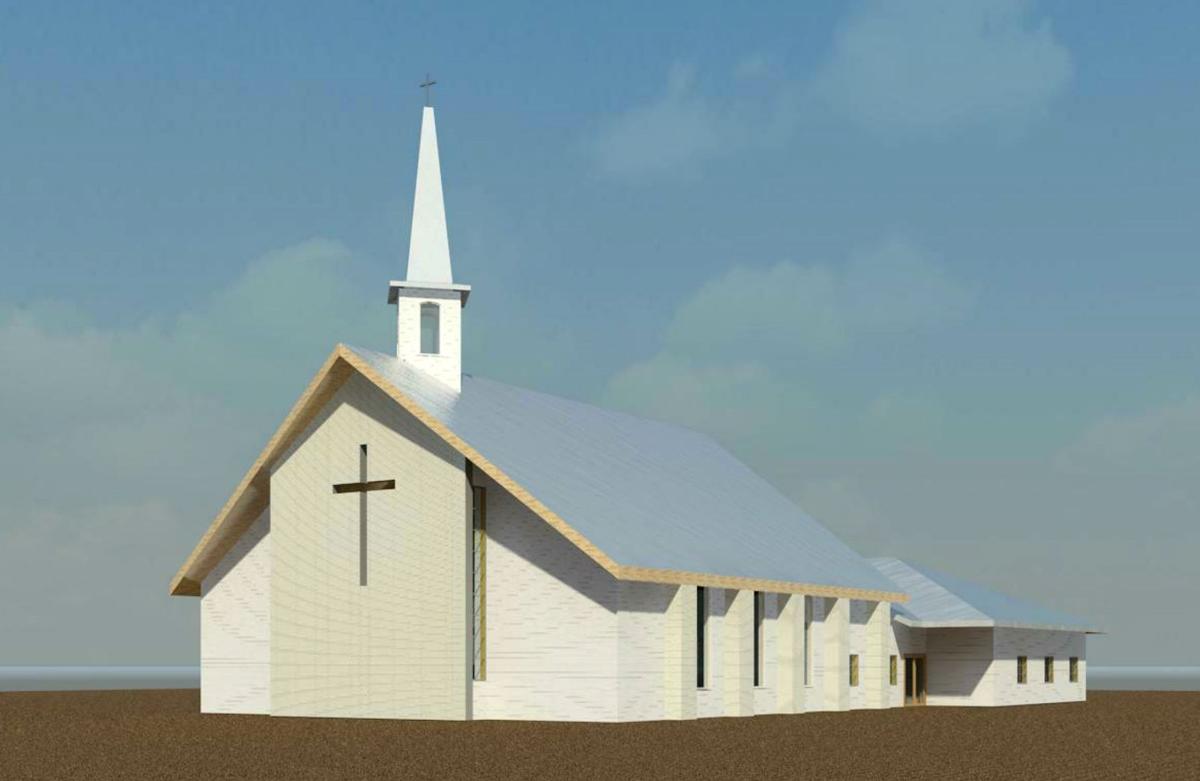 This rendering shows the new design of Cornerstone Church in Spring Green. Construction of the single-story, 8,400-square-foot facility could begin in May and be completed by Thanksgiving.