LANCASTER — The idea was to find a story that would provide a break from the health scare, chaos, uncertainty and economic damage caused by the COVID-19 pandemic.

A one-of-a-kind pedal car in the state’s Driftless Area seemed to fit the bill.

The one-seat, motorless car was used by a physically disabled Lancaster man for decades and recently donated to the Grant County Historical Society Museum. The car is an indelible piece of Lancaster history, and anyone who lived in the community from the 1920s through the 1980s remembers Sonny Tiedemann pedaling the car from his home just a block off the city’s courthouse square.

But the coronavirus doesn’t care about history. It also didn’t care about the heavy rains that fell Thursday, swelling creeks and rivers, and adding flooding to the list of concerns during this surreal spring.

An event to unveil the car at a public ceremony Saturday was postponed for a planned private ceremony. Then the private event was canceled late last week as it would have included more than 10 people. The museum, normally open three hours a day, six days a week, has closed. Its part-time director, Rachel Lewis, was told Tuesday by the historical society’s board that she will be laid off as of April 3.

So much for just trying to tell a sweet story.

“It’s a shock,” said Lewis, who was hired in 2017 and recently guided the museum into its new space. “But my story is not unique.”

Museums are among the many casualties of the pandemic as thousands have lost their jobs across the state. The Wisconsin Historical Society has closed all of its historic sites, such as Pendarvis in Mineral Point and Stonefield Village in Cassville. Waiters, waitresses and bartenders are unemployed and hotels are shuttered. Wisconsin-based retailers such as Kohl’s, Duluth Trading Co. and Penzeys Spices are all on hiatus. Wisconsin Dells, normally a thriving destination this time of year, is a ghost town.

In Lancaster, Walker’s Clothing & Shoes is still open as it has been since 1928, the historic courthouse remains the centerpiece of the downtown, and Doolittle’s Pub & Eatery had its fish fry Friday night, though carryout only. However, Head Zup, a hair salon next door to where Tiedemann grew up, was ordered closed Friday by Gov. Tony Evers, along with every other hair salon, barber shop and tattoo parlor in the state.

“Who would have thought there would be all this stuff going on,” said Cindy Busch, who along with her husband, Larry, lives in Tiedemann’s former home, one of the oldest in the city. “We just got involved with this because we live in the house. The car has a big story, so it’s hard to know where to start.”

It’s a tale that involves not only Sonny Tiedemann but also his brother Kieth, who provided $20,000 in seed money to help launch the Lancaster Community Fund in 1999. He added another $4.3 million in 2014. There’s a contractor who restored the car in this story. But the tale begins with Charles and Iva Tiedemann, the parents of Kieth and Sonny.

Charles (Charley) Tiedemann was born in Platteville in 1889. That’s where he started working in a bakery for $2 a week. He met Iva while working at Lathrop’s Bakery in Lancaster, and, in 1914, two years after their marriage, along came Charles “Sonny” Laverne, who was injured at birth and would not be able to walk or speak clearly. Later that year, the family moved to Warren, Illinois, where Charley had purchased a bakery.

But in 1915 they moved to Minneapolis, where Charley went into business with another baker. In early 1916, Kieth was born, and in June of that year the family moved back to Lancaster, where Charlie started Purity Bakery, which became famous for its cinnamon stick rolls.

In 1920, the Tiedemanns purchased a house at 140 N. Jefferson St. that from 1853 to 1917 was the home of John G. Clark, a colonel during the Civil War and a friend of General Ulysses S. Grant, a frequent guest. The Tiedemanns could have cloistered Sonny at home or sent him to an institution. Instead, they took a different approach, said Kay Tiedemann Young, one of Charley’s cousins.

“They were so filled with love. They were just wonderful to be around to visit,” Young said Saturday during a phone interview from her Platteville home. “There was just such a calm and peace about the home. The acceptance of Sonny’s infirmity was always from the beginning. They just moved forward with this amazing ability to accept what the situation was graciously but also with a thought toward always making life better.”

Therapists and tutors were hired, but it became apparent Sonny would not be able to walk. Sonny could, however, move his legs. In 1928, Charley bought a two-seat Briggs & Stratton Buckboard, essentially a wooden sled with wheels with a small engine on the back. Charley hired a bakery employee and a local blacksmith to cut down the car and retrofit it with a pedal system so Sonny could drive it on city sidewalks. It also was equipped with brakes from a Ford Model T and a steering wheel from a 1928 Cadillac.

The car gave Sonny independence, helped him meet friends and created a local phenomenon of 50 years.

“Sonny was a fixture on the square waving to people,” said Young, who spent 31 years as a librarian at UW-Platteville. “The car was just a part of the whole flow of accepting a disability and making the best of life. I know it sounds corny, but it was such a loving situation.”

After his parents died, Sonny had full-time caretakers in his home until he died at age 79 in 1994. The caretakers were paid out of Sonny’s parents’ estate. Sonny’s brother, Kieth, became a certified public accountant, served in World War II, was a private pilot and artist, and lived his life in San Francisco with his wife, Emily. Kieth died in 2007 and Emily in 2014. They never had children, and their huge donation to the Lancaster Community Foundation represents the gratitude Kieth felt toward Lancaster.

“He felt it was important because people were so nice to Sonny,” Busch said. “He grew up here and said it was like a Tom Sawyer boyhood.”

The car was sold in 1984 to Denny Duncan, a local contractor who had come to the Tiedemann home at Kieth’s request to do some work. Sonny no longer used the car, which was in the garage, so Duncan restored the vehicle. It later appeared on a float in a 1992 parade and in Lancaster High School’s 2009 production of “Cabaret.” Duncan died in 2017, and his family last week donated the car to the Historical Society after Duncan’s sons gave it a fresh coat of paint and a new horn.

Even though the museum is closed, the car is prominently displayed in the museum’s front window. At some point there will be a public ceremony, and the full exhibit and the rest of the museum’s collection will be able to be enjoyed.

“We hope at some point to have a big Sonny Day event, have the cinnamon rolls and bring people in,” said Busch, a retired UW-Extension nutrition educator. “The Tiedemann family is why all of this stuff happened.”

Craft soda and sparkling water company Wisco Pop in Viroqua is growing but the COVID-19 coronavirus pandemic has created an uncertain future for small businesses as the economy reels.

The COVID-19 coronavirus pandemic has meant huge business for grocery operators who are struggling to keep up with demand.

An employee who was last in Trader Joe's, 1810 Monroe St., on Monday has tested positive for COVID-19, and the store is closed for cleaning.

Slowpoke Cabaret & Lounge is a former NASCAR bar that has been transformed into a performance space for music and professional theater productions. 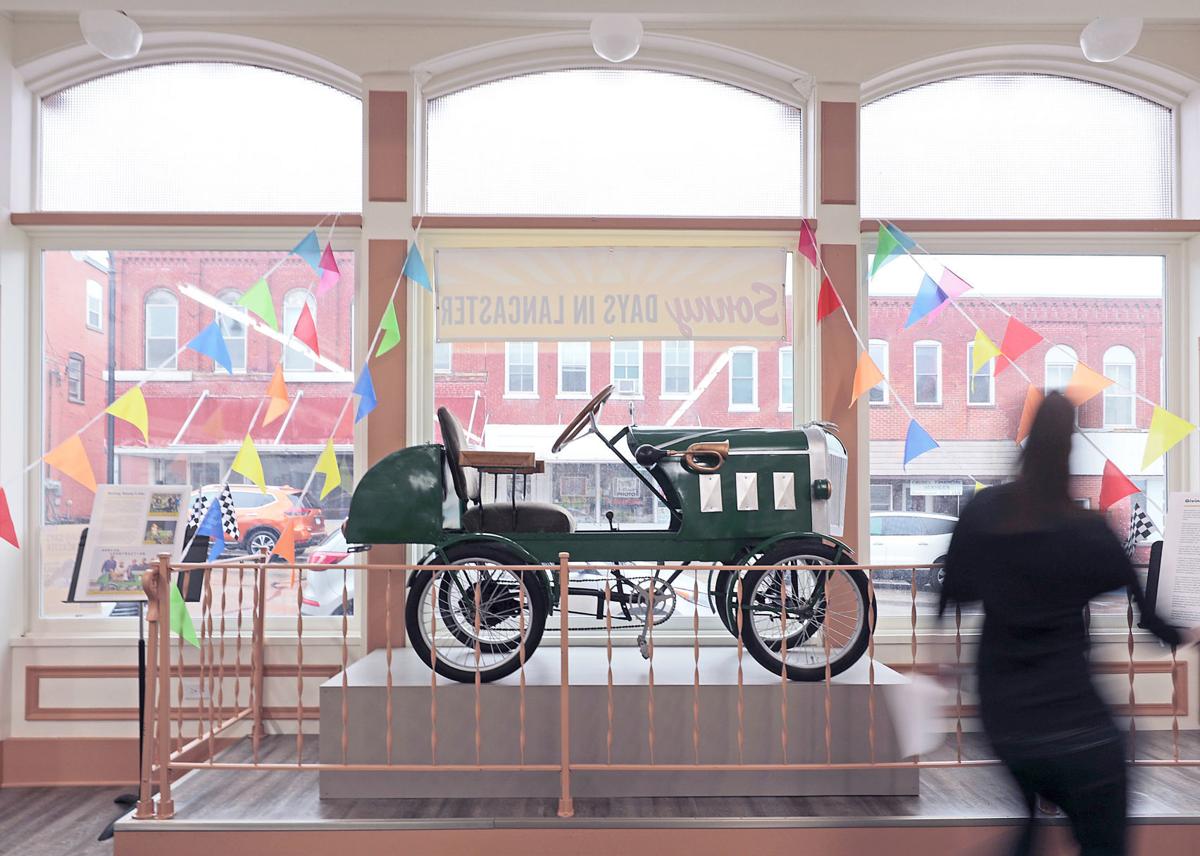 A pedal car used for over 50 years by Charles "Sonny" Tiedemann is now part of the collection of the Grant County Historical Society in Lancaster. The car was sold in 1984 to Denny Duncan, who restored the vehicle. 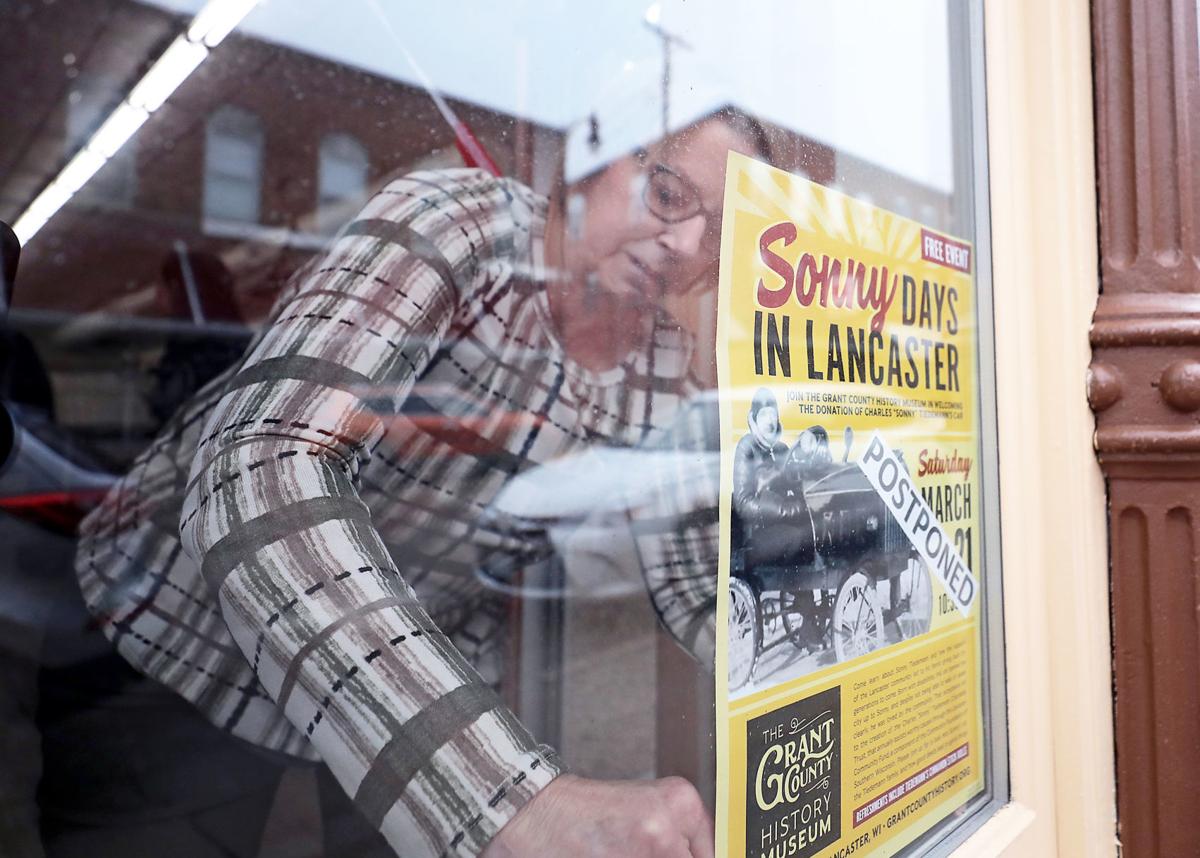 Cindy Busch, who lives in the home where Sonny Tiedemann grew up, posts a sign Thursday announcing the postponement of Saturday's "Sonny Days in Lancaster" event at the Grant County Historical Society Museum. 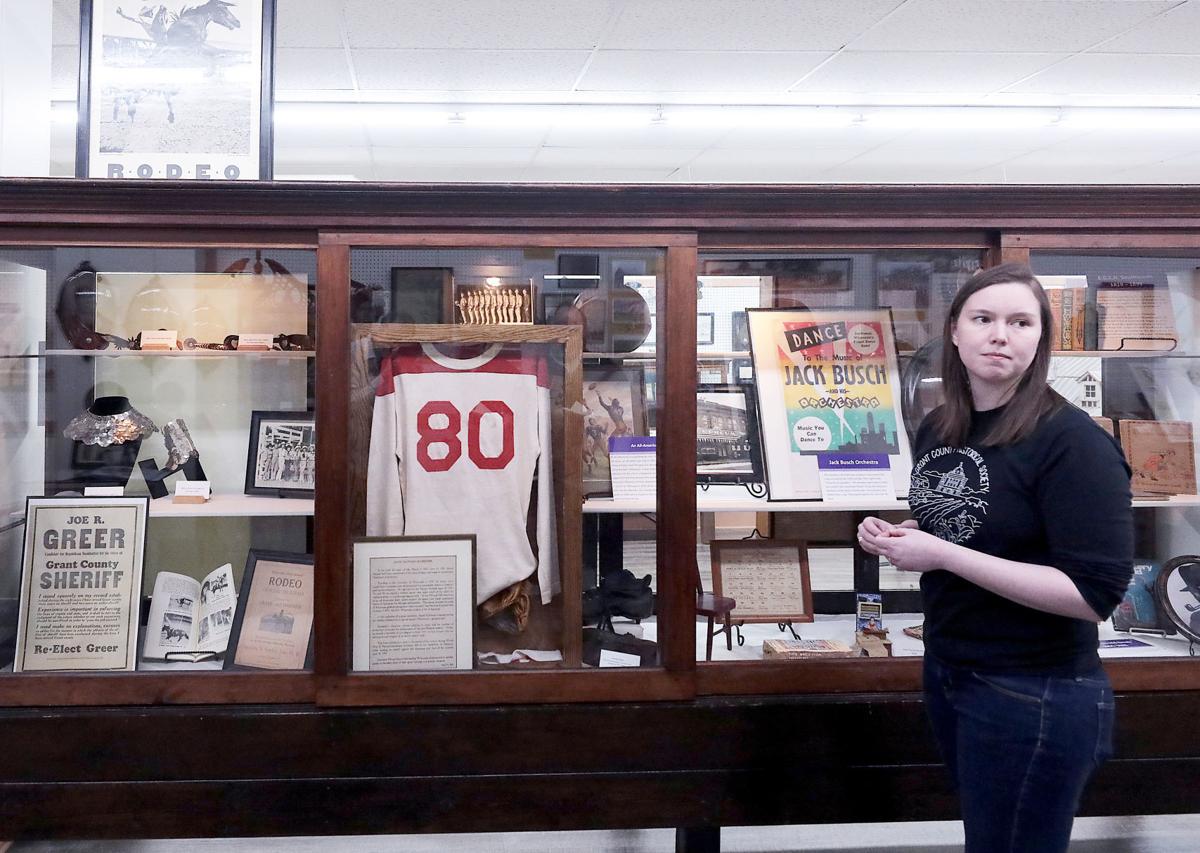 Rachel Lewis, who has served as Grant County Historical Society Museum's part-time director since 2017, was told last week that she has been laid off due to the museum having to close because of the ongoing COVID-19 coronavirus pandemic. 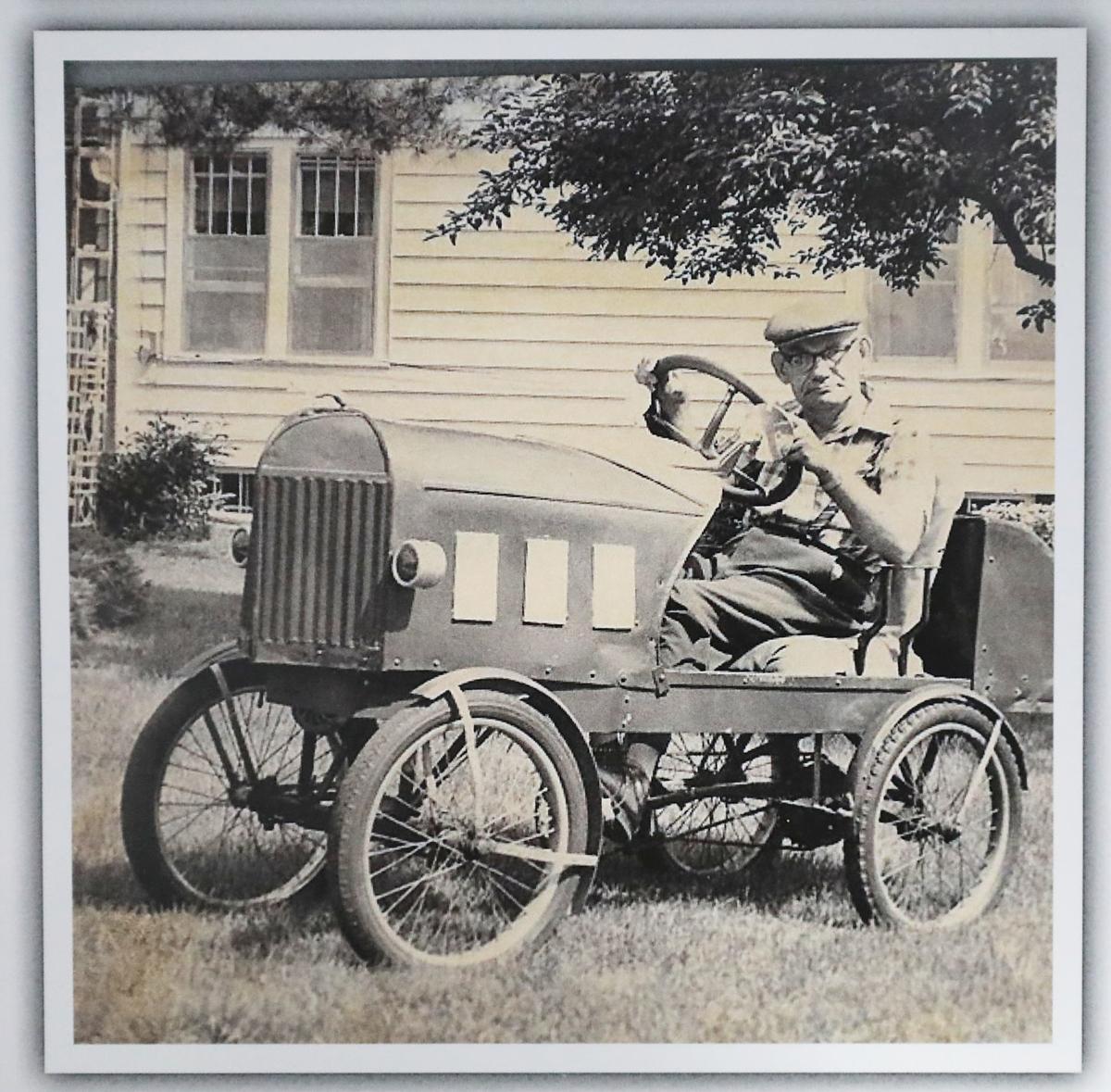 A reproduction of a vintage photo shows Charles "Sonny" Tiedemann in his pedal car in Lancaster. 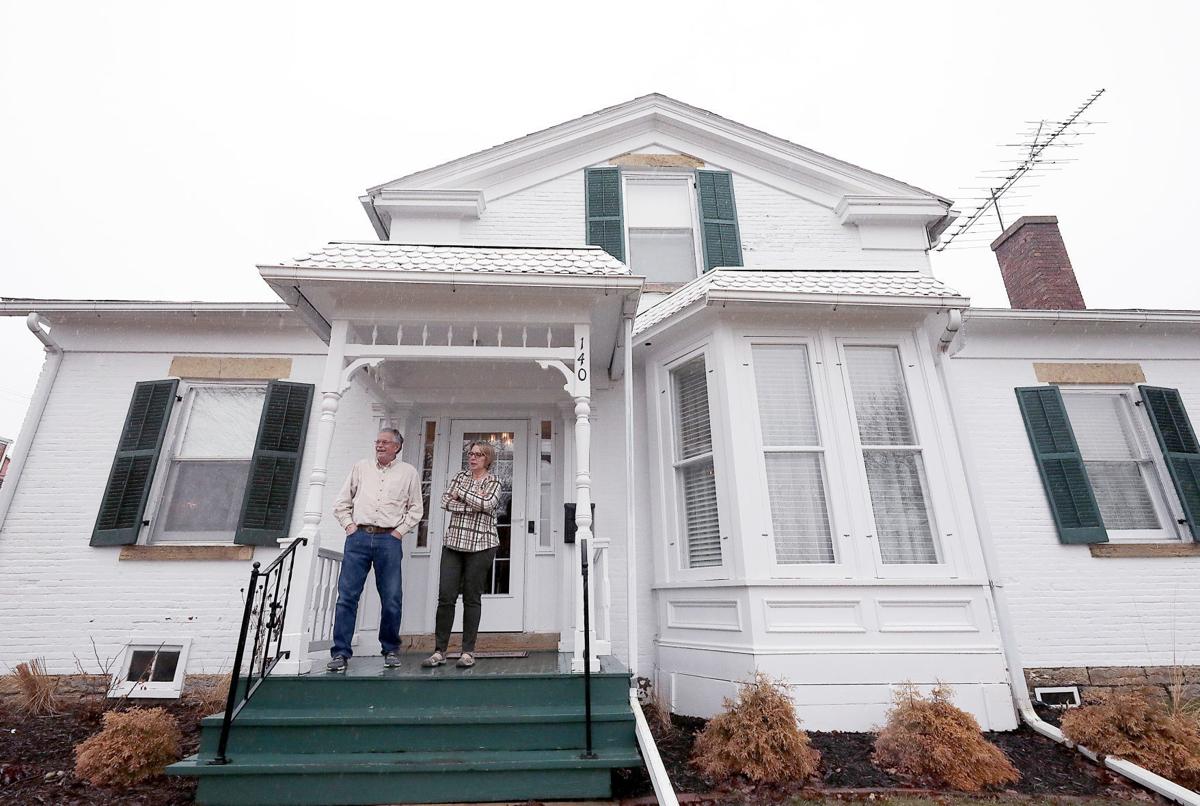 Larry and Cindy Busch have, since 2008, owned the former Tiedemann home just off the square in downtown Lancaster. The couple has restored the home but did not repair the marks left in the back porch door frame made by Sonny Tiedemann's pedal car, which was stored on the porch for decades. 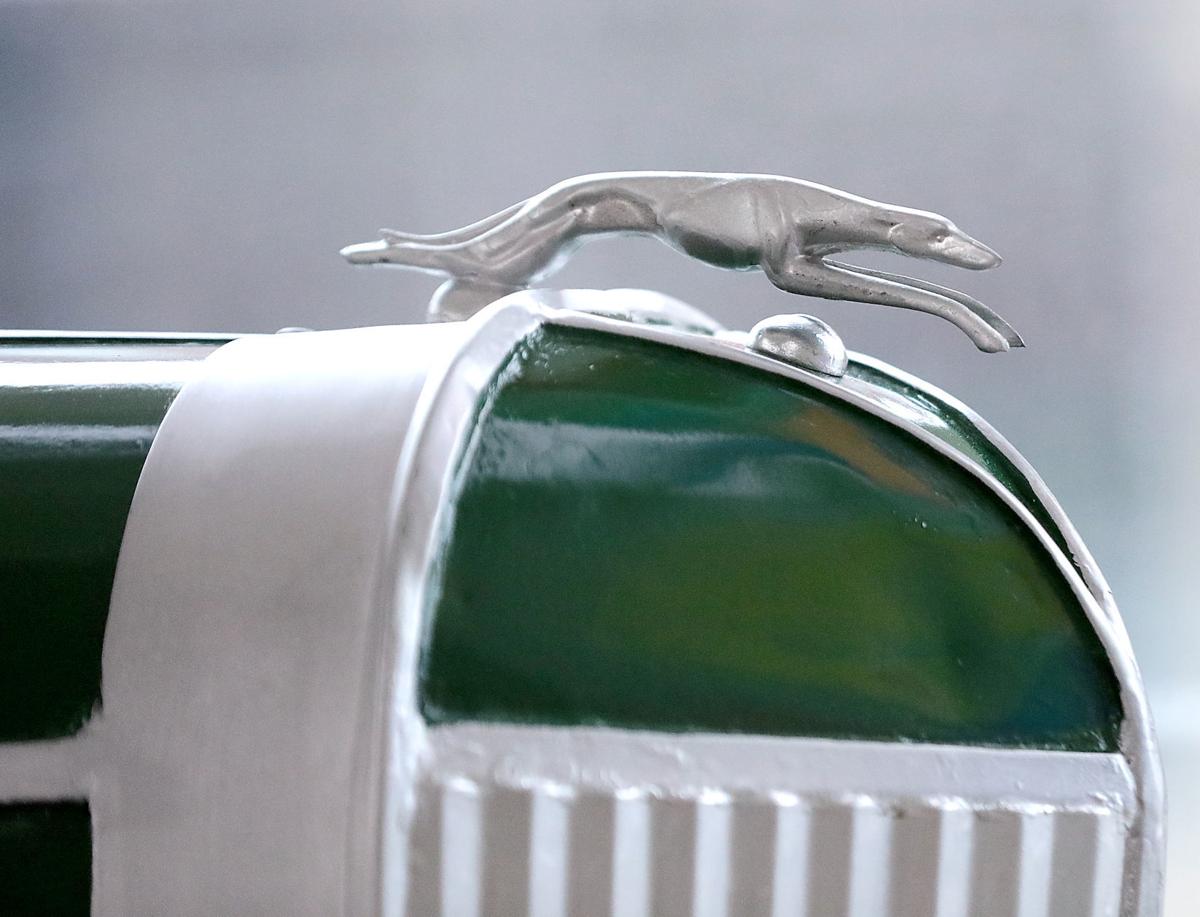 The hood ornament of the pedal car that was built in 1928. 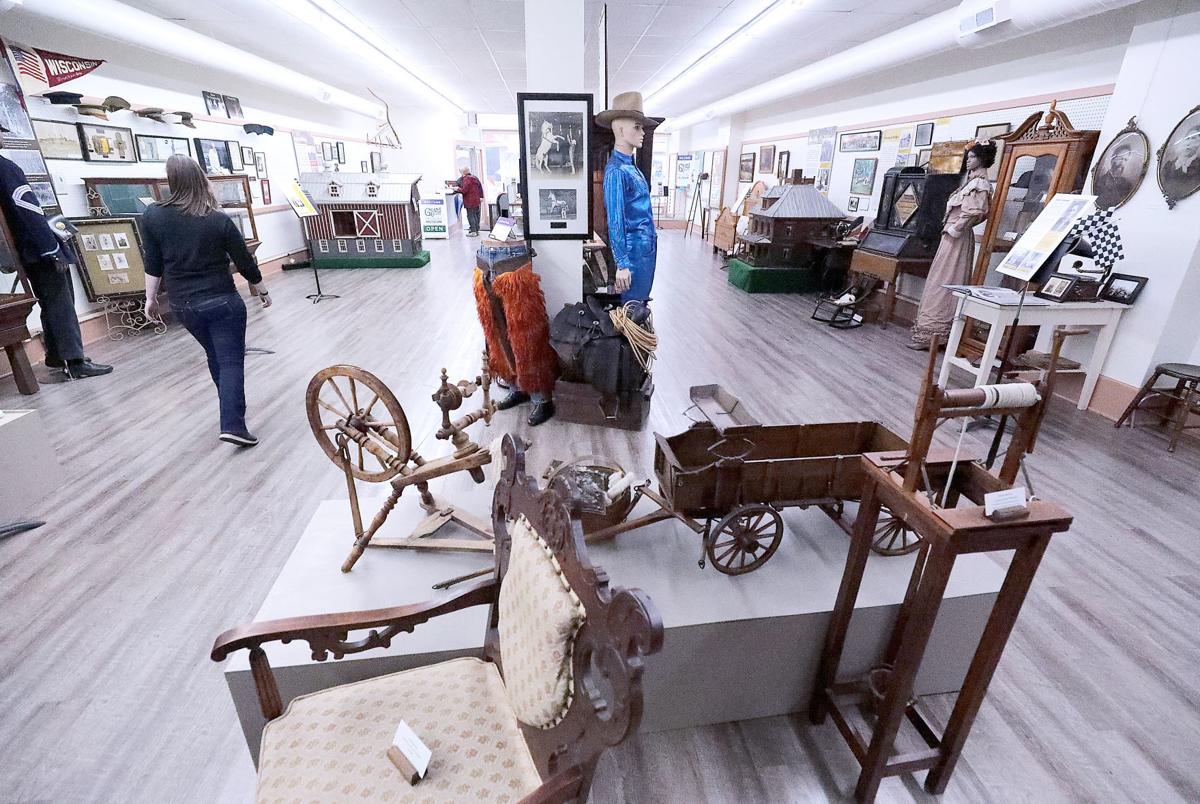 Closed to the public because of ongoing COVID-19 coronavirus concerns, the Grant County Historical Society Museum in Lancaster had been open three hours a day, six days a week. 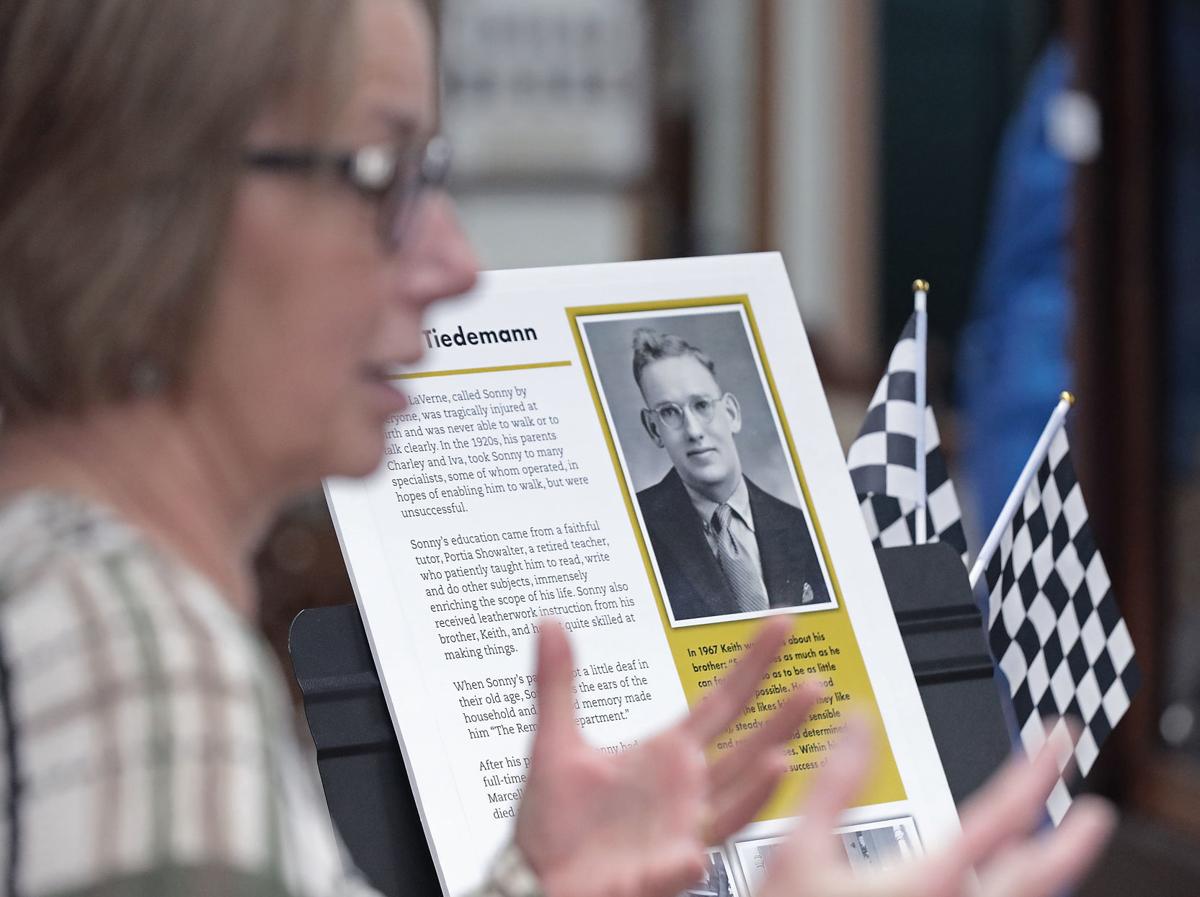 A placard tells the story of one of Lancaster's best-known citizens, Charles "Sonny" Tiedemann, at the Grant County Historical Society Museum. 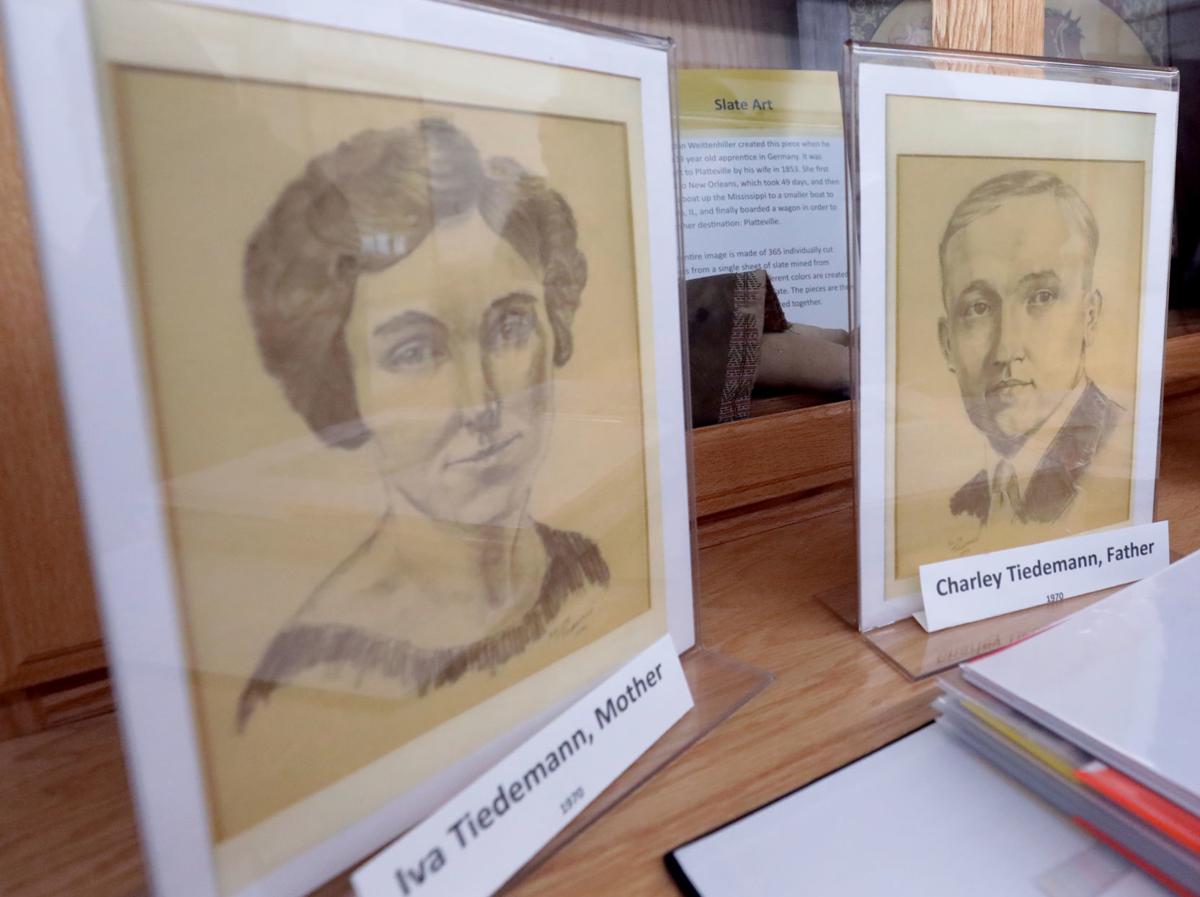 Sketches of Iva and Charley Tiedemann, drawn by their son, Kieth, are part of the exhibit at the Grant County Historical Society Museum in Lancaster. 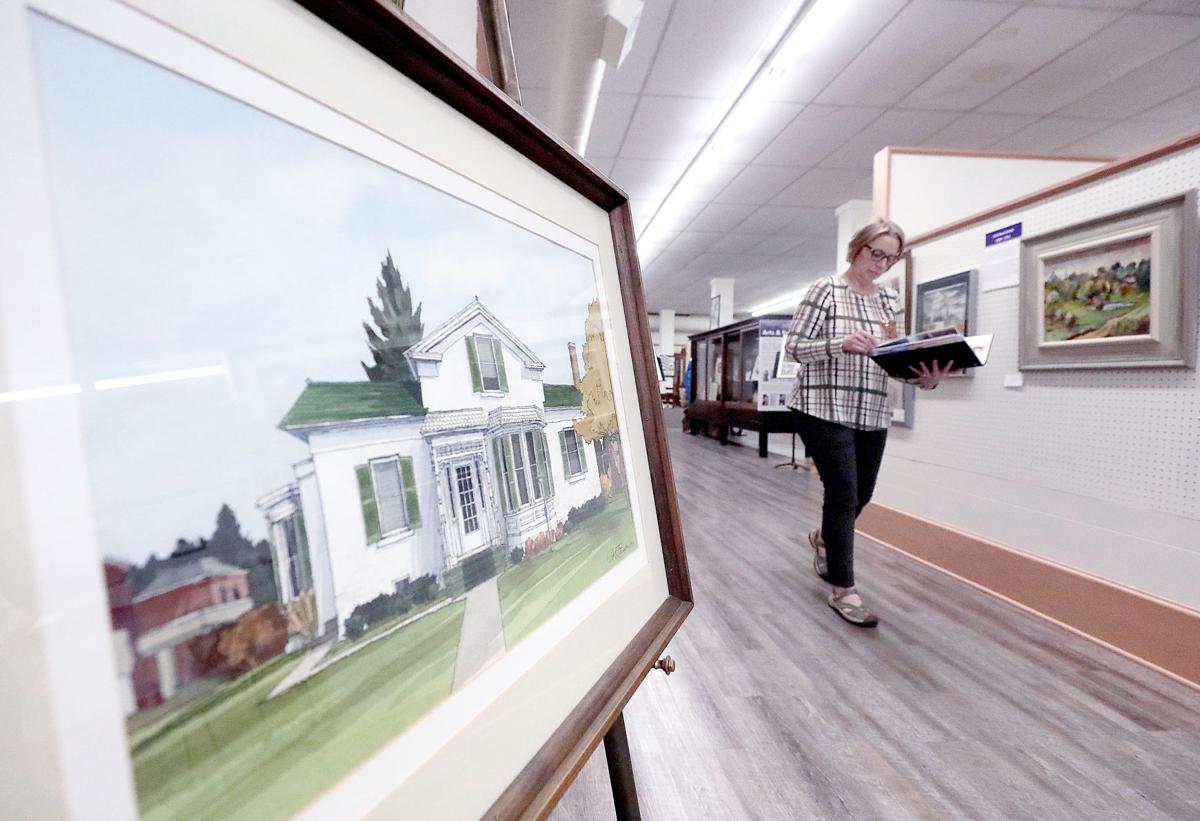 A painting of a home once occupied by Charles "Sonny" Tiedemann and his family was briefly displayed as part of an exhibit recognizing the family at the Grant County Historical Society Museum in Lancaster.