COLUMBUS — The passion was gone in an instant for Darvin Frey.

For years he has been all-in on his massive, eclectic collection.

There’s a vintage printing press that includes hundreds of metal Hamilton plates. Farm toys and beer and brewery memorabilia fill shelves. He has a Seeberg jukebox from the late 1930s, a bicycle with wooden rims built in 1899, a sleigh from the 1860s and a 1974 Arctic Cat snowmobile. There are old signs, a miniature steam locomotive he bought at a Pennsylvania car show and a fully decorated aluminum Christmas tree he got for $5 years ago when he noticed it sticking out of a box when he was buying a car from an elderly woman in Chicago.

But in a few weeks, Frey’s former obsession will come to a much-needed close. He’s not sure what lies ahead but knows he needs to part with his collection of thousands of items that now fill a 9,000-square-foot, three-story building between the railroad tracks and the Crawfish River.

“I kind of have a goal of becoming a minimalist,” Frey said last week during a tour of his Badger Motor Car Co. facility. “Once this is all gone, I won’t have a lot to my name.”

It was November, and a few people were in his business that since 2015 had served as a museum that happened to have a bar. And that’s when Frey, now 50, realized he could no longer go on with his unique business, housed in a former factory that decades ago was used to build concrete burial vaults and later machinery to harvest peas. Frey’s mental health had collapsed, and he knew he needed help with his obsessive compulsive disorder, anxiety and depression.

Nine months removed with three stays in psychiatric hospitals and a new regimented exercise routine, Frey is in a better place and ready to focus on his three children and his improving mental health. Plans for expansion of the business and an outdoor beer garden along the river will not come to fruition. An auction over two days on Sept. 11 and 12 will help put Frey on a new yet unknown path.

“I’ll have to do a better balancing act. There was no balancing act with this,” Frey said. “I was so obsessed with making it better, making it grander, that I just couldn’t balance my life with taking care of myself.”

The auction is both an online and in-person affair and is being run by W. Yoder Auction, a Wautoma company that specializes in unique collections. It’s founder, Wayne Yoder, was the state champion auctioneer in 2008, and when the Bucky Badger statues were auctioned off in Madison in 2018, Yoder served as the auctioneer.

Yoder, 51, said many of his auctions that deal with collections tend to focus on a certain genre, such as cars, toys, signs, coins or antiques from specific periods. But with Frey’s collection, there is no one dominant category. Yoder estimates the collection, which is being sold in about 2,000 lots, could bring in anywhere from $250,000 to $500,000, depending on the bidders. About 300 have already registered, with some already submitting pre-bids on-line.

One of the gems of the auction is a gambling machine, more than 100 years old, that resembles a merry-go-round and uses a crank to propel hand-size carved wooden horses in a circle. The numbered horse closest to the finish line when all horses stop is declared the winner. The game, built by an amusement device company in Colorado, had been owned by the local American Legion, whose members for years took it to area picnics and carnivals.

“I think it might bring a lot of interest,” Frey said, as he cranked the handle to get the horses to move in a circle. “When they stop, the closest one to this pole without going through is the winner. It’s completely random.”

Frey, an aspiring writer, has already sold his collection of 25 motorcycles, 24 of which went to one buyer. He sold a Vespa scooter to Jim and Mike Ring, who create custom cars in Spring Green, but a 40-foot wooden rowing skull remains hung from the ceiling in Frey’s basement. It’s adjacent to a speakeasy that includes an antique bar from the 1800s and a living room filled with mid-century furniture, including an orange electric fireplace. The basement also holds a wooden grocery push cart, several beer signs and beer promotional items and a Sea King 12-hp outboard motor.

“I’m thinking we’re going to have a pretty good crowd,” Frey said of the upcoming auction. “I think the diversity of the items will bring a lot of people and mid-century is really hot right now.”

Frey bought the building at 336 N. Spring St. in 2015 and spent thousands of dollars upgrading the property. He began filling the building with his collections and, despite being an alcoholic, added a bar to bring in people. He’s been sober for 14 years. Frey worked menial jobs after graduating from Columbus High School in 1988 and was often unemployed. He ultimately started his own landscaping and snow removal business and delved into a childhood fascination with all things old.

His Badger Motor Car Co., located just west of the Amtrak station and near the Columbus Antique Mall, was named after the company that built automobiles in Columbus from 1910 to 1913. One of Frey’s regrets was missing out on a chance at buying one of the cars, as only a few are believed to exist.

Frey, whose brother, Todd, builds custom horse carriages in Columbus, has never been shy of making a purchase and he became enamored with the Ibisch family, one of the city’s most industrious, who built several commercial buildings and homes in the city.

Carl Ibisch built Frey’s building in 1920. His brother, Franz Ibisch, worked for a year in the 1930s in an upstairs room on a wooden model of a carriage for a contest sponsored by Fisher Body, a subsidiary of General Motors. Franz ultimately was awarded a scholarship to attend UW-Madison, was a World War II pilot and in later years a commercial aviator. The entryway to Frey’s Badger Motor Car Co. is also furnished with original pieces from the Ibisch Burial Vaults Co., which will soon be dispersed. The building, which includes several outbuildings and a house, is also being sold, but through a Realtor, not via auction.

“It had to speak to me,” Frey said, when asked about how he chose items for his collection. “I wanted it to be a diverse collection of things people haven’t seen before. And I think we reached that goal.”

Graciousness, attention to detail a way of life for Bill Mattison

The Madison man, who was part of winning the 1992 America's Cup, built iceboats and sailboats and has a passion for the circus, has been inducted into the National Sailing Hall of Fame.

The sisters of Valley of Our Lady Monastery in rural Prairie du Sac offer up exhibits this week and are closing in on a major fundraiser to build a new facility near Barneveld. 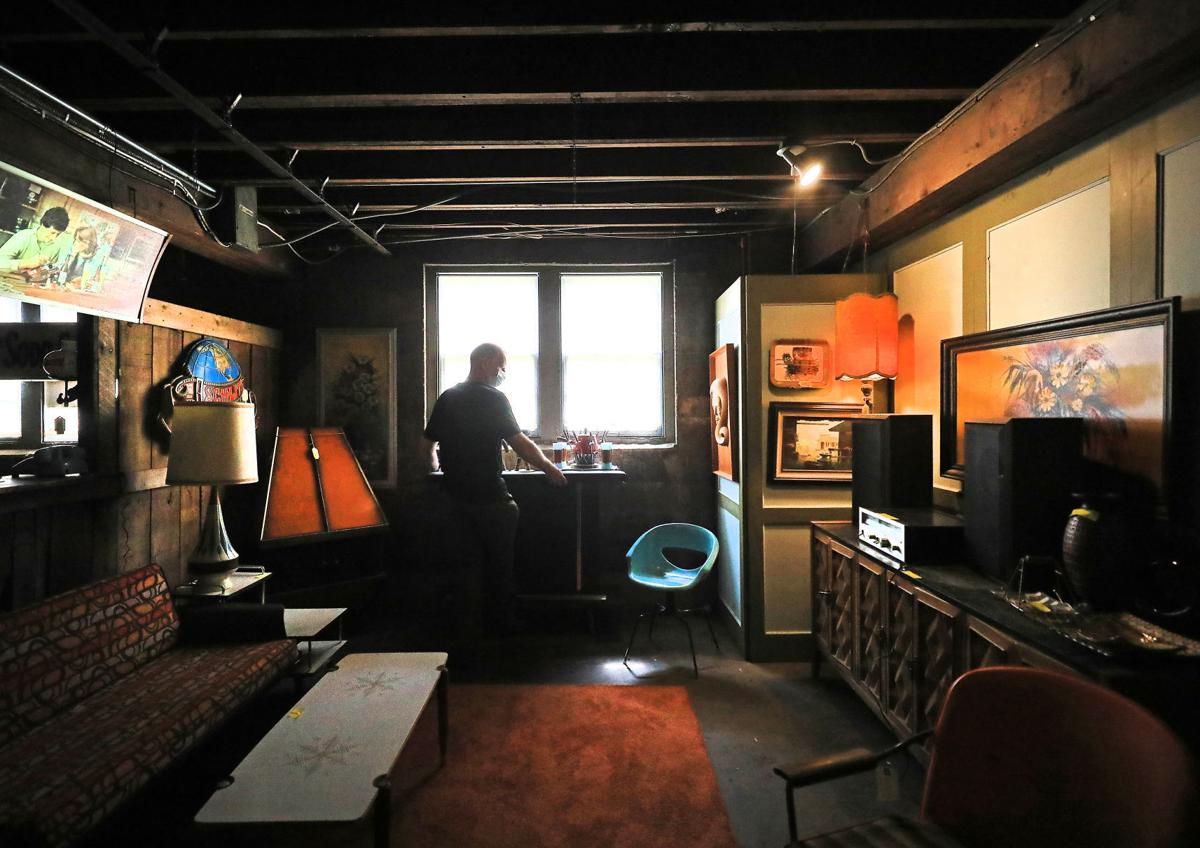 Darvin Frey, owner of the Badger Motor Car Co. in Columbus, has spent most of his life collecting a wide range of items now housed in a three-story building. It includes a room full of mid-century furniture and thousands of other items that will be up for auction Sept. 11-12 and could bring in between $250,000 and $500,000. 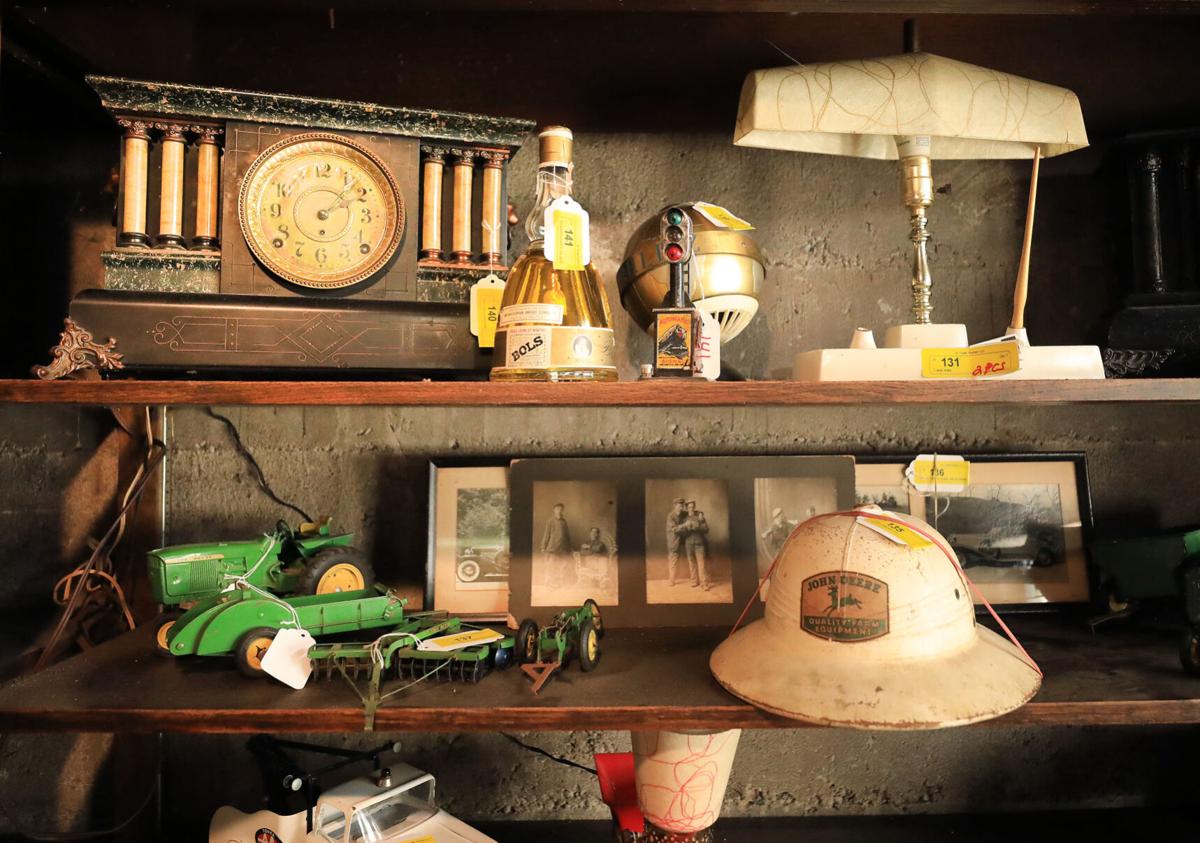 An eclectic array of collectibles acquired by Darvin Frey will be auctioned in about 2,000 lots next month. 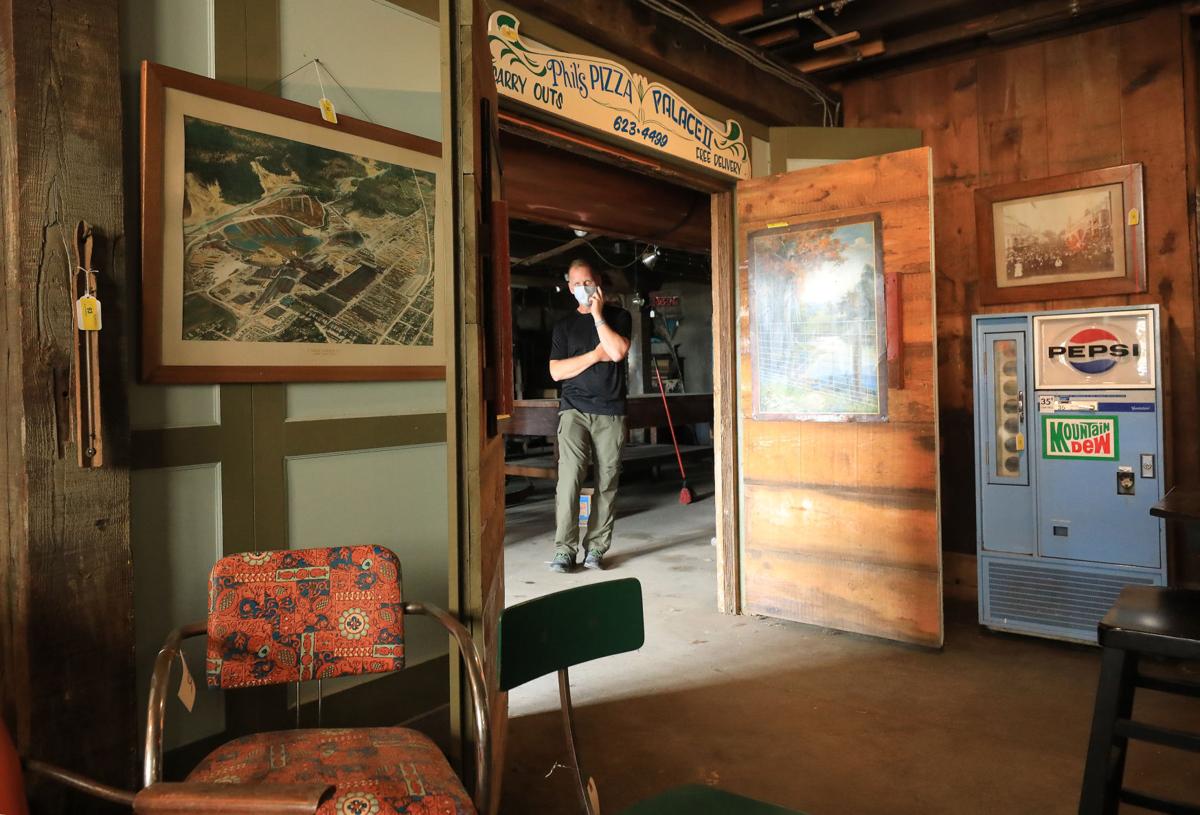 Darvin Frey opened his Badger Motor Car Co. in Columbus in 2015. Its three floors of collectibles include a vintage Pepsi Cola machine. More than 500 bidders are expected at next month's auction. 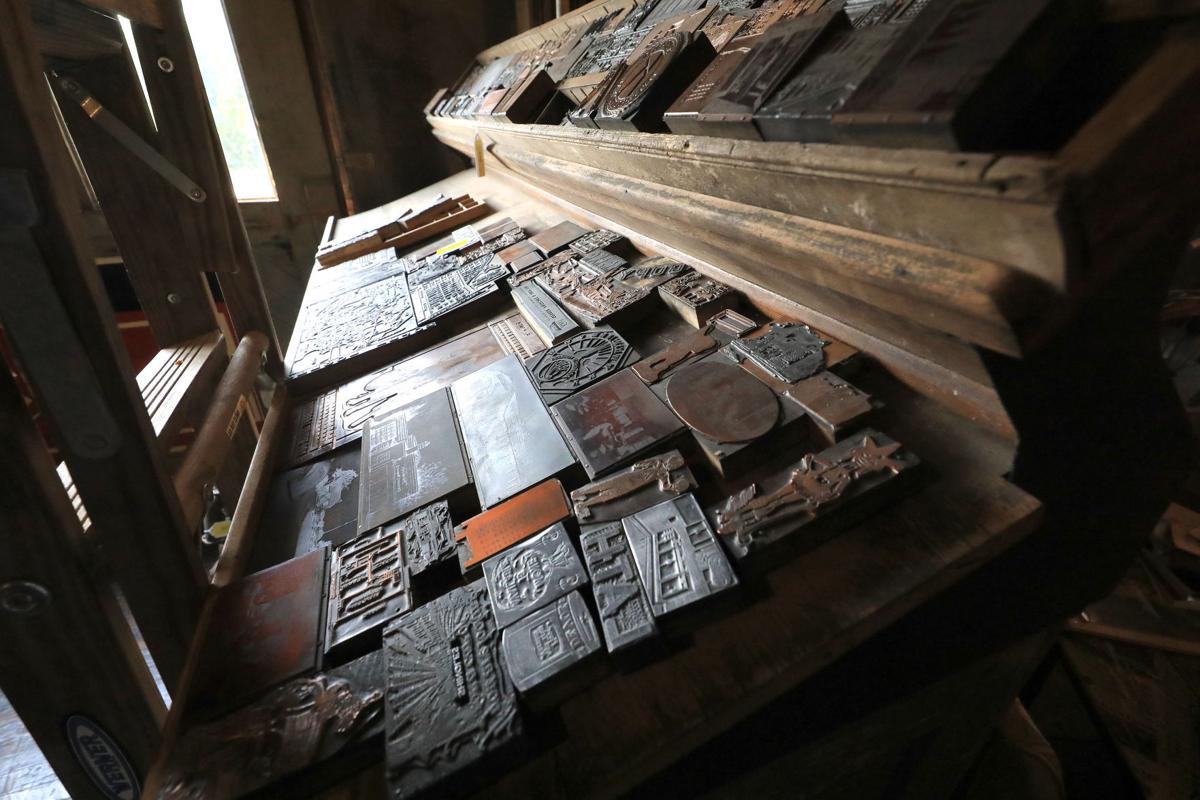 Lead type plates acquired by Darvin Frey share shelf space in his Badger Motor Car Co., named after a Columbus car company from the early 1900s. The press plates are near a vintage printing press and are stored in a wooden cabinet, all of which are up for auction next month. 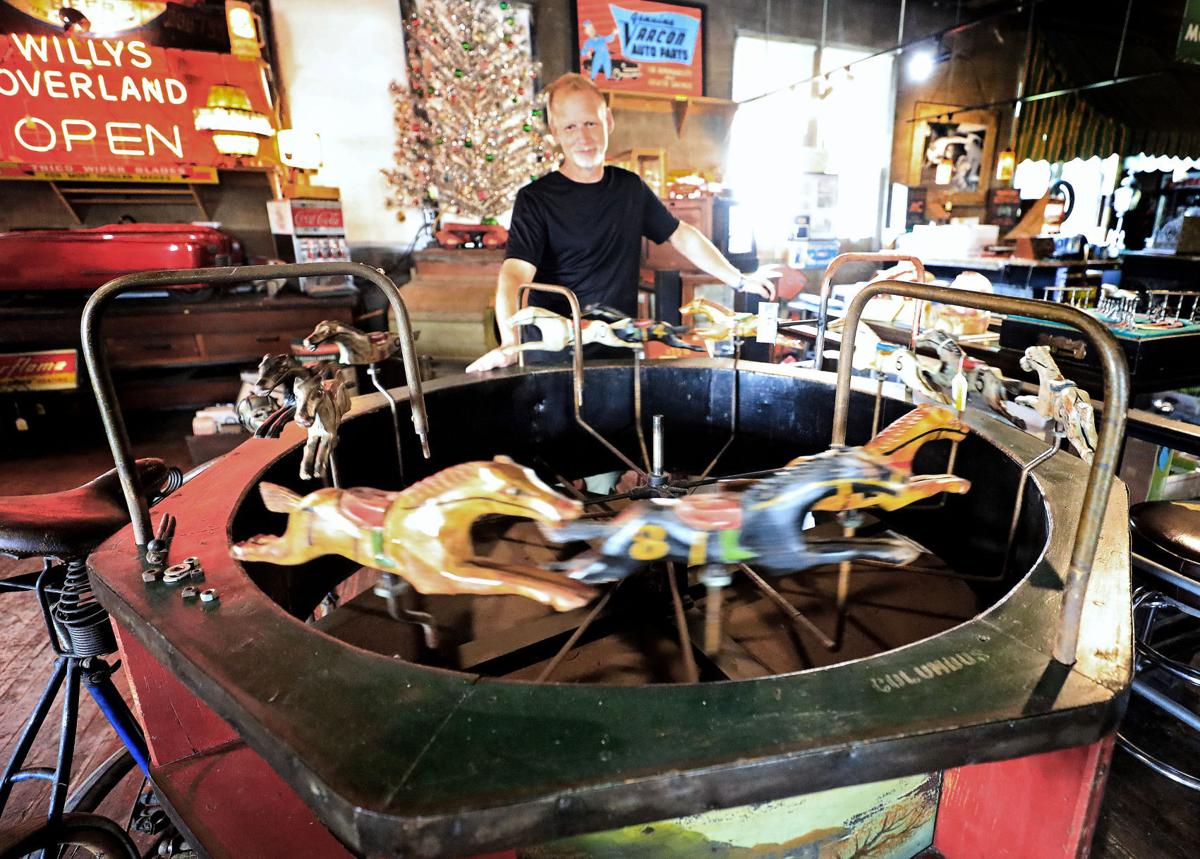 One of the gems of Darvin Frey's collection is this antique gambling game believed to be over 100 years old. A crank makes the horses go around in a circle, and the horse that stops closest to a designated bar is the winner. 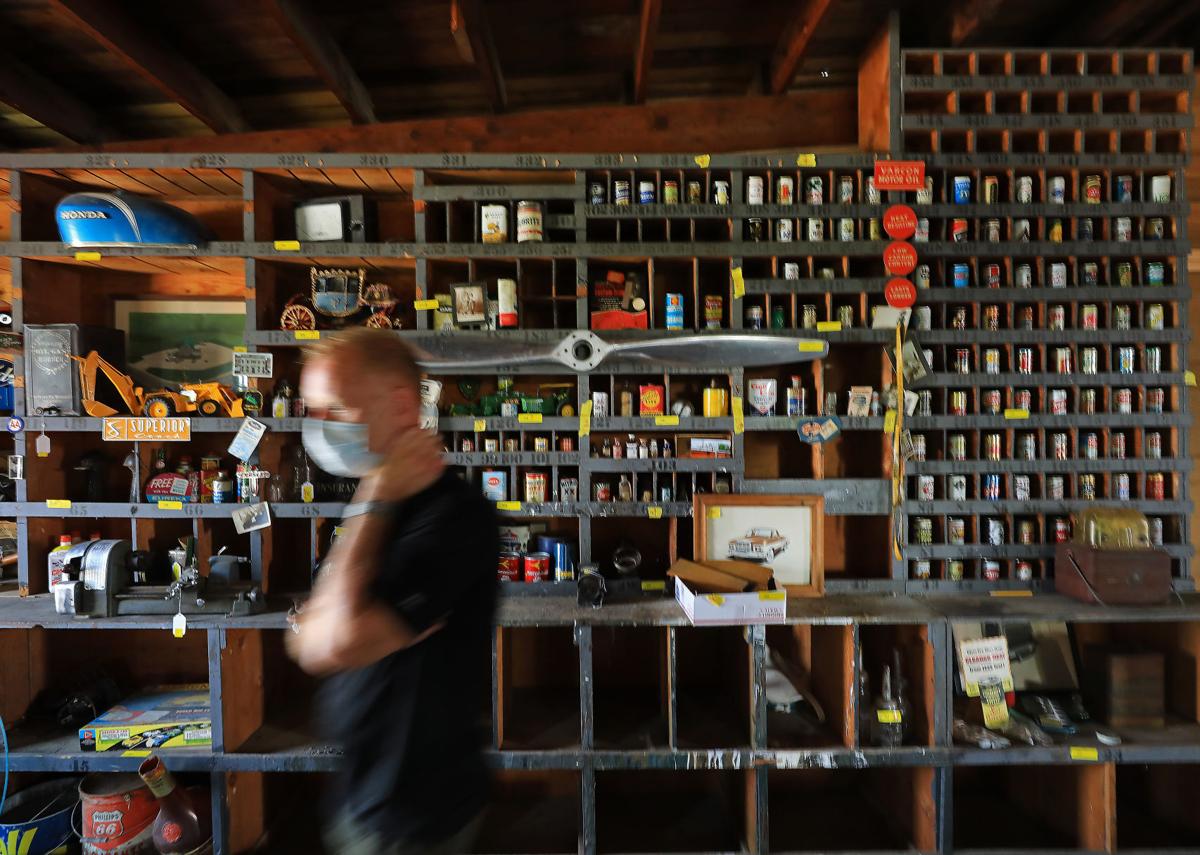 An airplane propeller is surrounded by a beer can collection on the third floor of Darvin Frey's Badger Motor Car Co. in Columbus. The building was constructed in 1920 and is also for sale. 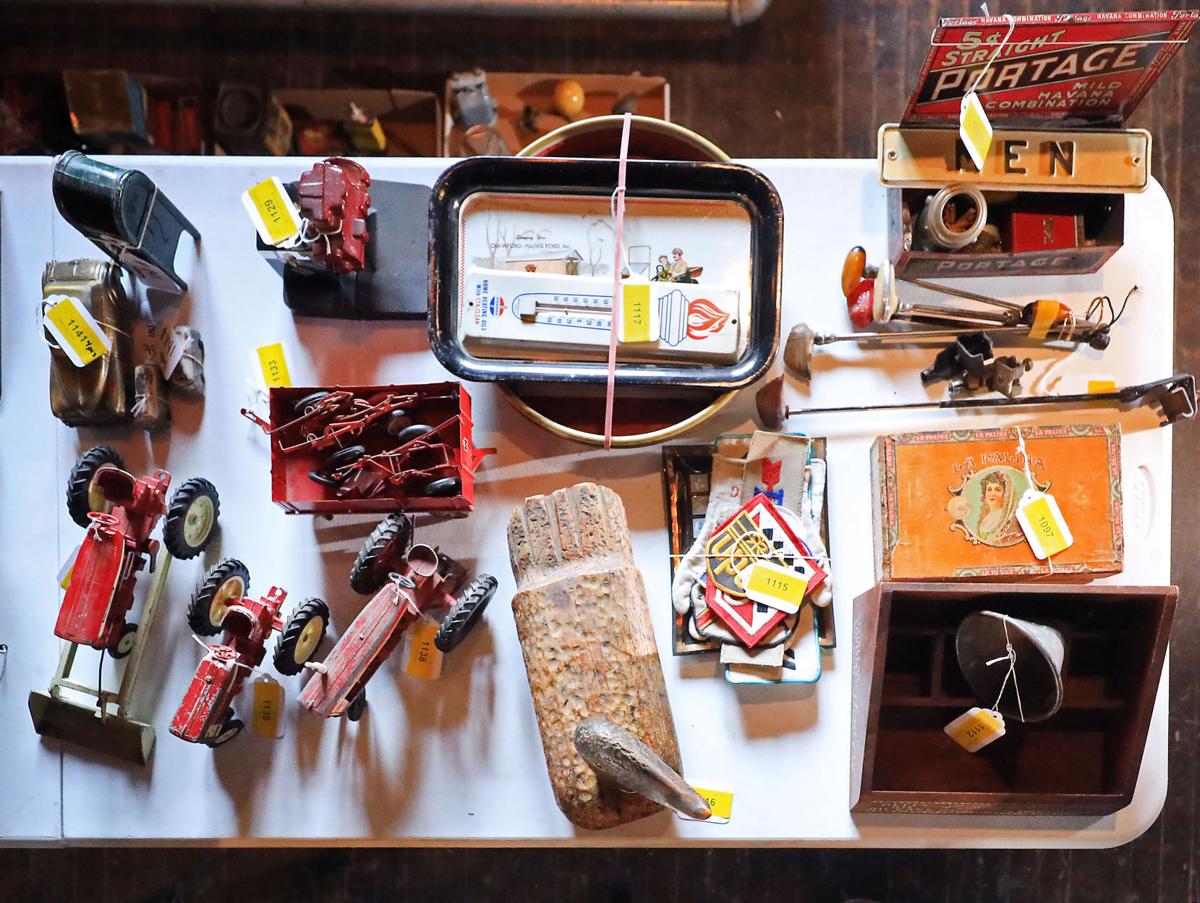 Collectibles acquired by Darvin Frey are marked with auction tags. 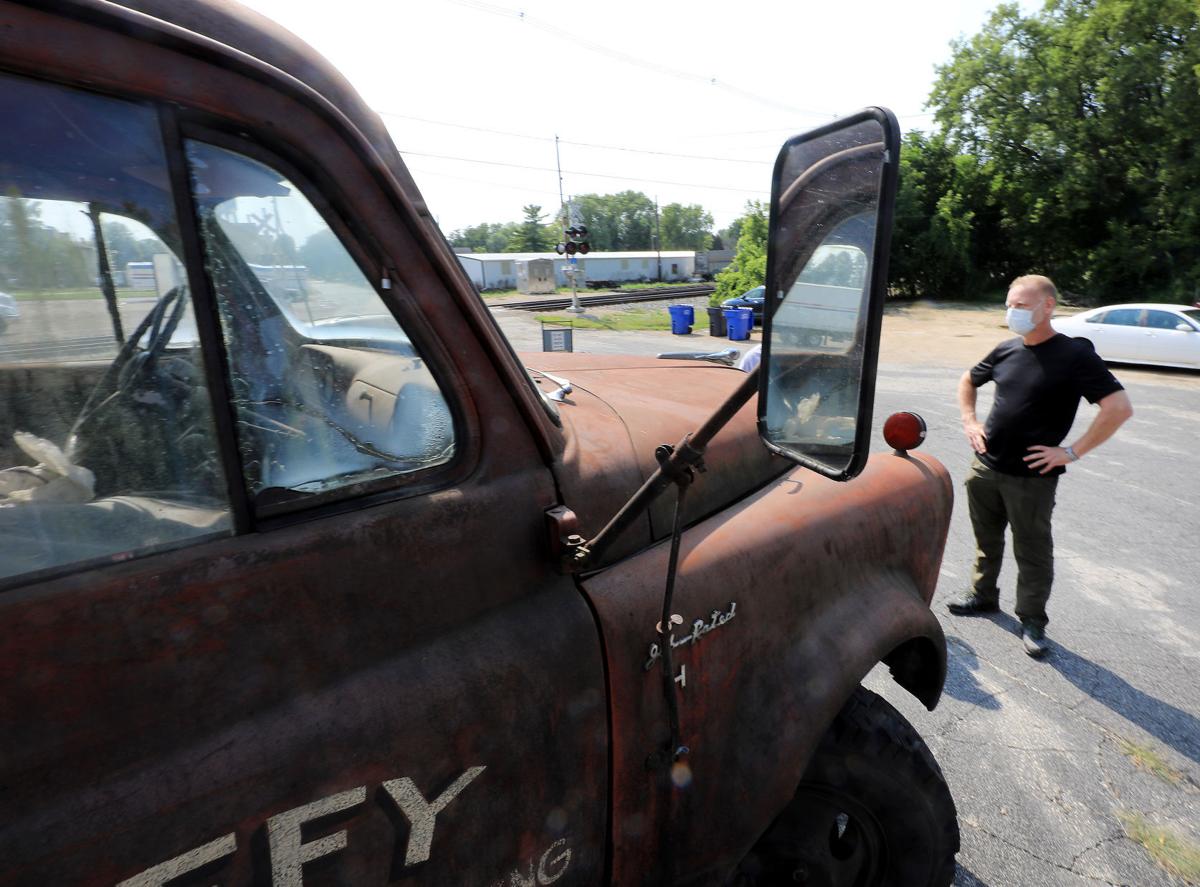 After years of collecting and five years of running a business that included antiques and a bar, Darvin Frey, seen here with a 1953 Dodge truck, is selling his collection at auction.