PAOLI — This hamlet along the Sugar River is the epitome of an artisanal niche.

The Hop Garden has locally crafted beer made from Wisconsin hops, Landmark Creamery creates award-winning cheese handcrafted from sheep’s milk, and Lily’s Mercantile & Makery is a boutique stocked with home decor, artwork, jewelry and vintage items that opened in June.

The chickens, however, have vanished. They’ve been replaced with horses, an ostrich, fox and a gangly armed orangutan.

The newest entry into this former mill town is also getting an internationally renowned sculptor out of her rural Verona garage.

Alexa King, whose work includes a bronze statue of Barbaro in front of Churchill Downs in Louisville, Kentucky, has opened a studio and gallery across the street from Paoli Park and within eyeshot of the Paoli Pub & Grill.

Located in the former Cluck the Chicken Store, which closed in May after seven years, Alexa King Studio Gallery will allow King to better meet with her clients, have work space away from her home and show off her impressive and pricey creations to a local audience.

“I needed a showroom,” said King, who has been in the remodeled Paoli space for about two months. “It’s really hard when you have clients and you have to bring them into the house. A garage is not the best spot.”

But for the majority of her career, a garage has been King’s workspace. When she lived in the village of Oregon in the late 1990s and early 2000s, the garage of her home on a quiet residential street is where she created a sculpture of children feeding ducks for Cincinnati Children’s Hospital Medical Center and a life-size secretary bird for a Lexington, Kentucky, art gallery. The sculpture of Barbaro — a thoroughbred racehorse who handily won the 2006 Kentucky Derby but then, two weeks later, shattered a leg at the Preakness Stakes — was formed in her town of Middleton garage and unveiled in 2009.

She then moved to Kentucky, where she had a studio, but in 2017 moved back to Wisconsin, where her workspace was in her rural Verona garage. That’s where she has spent the last two years working on a horse with a rider for a member of the Wrigley family. It’s now being cast at a foundry in Colorado.

King’s current project is a bit smaller. She’s in the process of creating a sculpture of an antelope hare, something she got a firsthand look at earlier this year while in New Mexico. She was part of a group that was hunting the animal using a rescued golden eagle and a Harris’ hawk. The hunt took place at night, with King riding in the bed of a pickup truck equipped with light bars used to shine on the hare. Her sculpture of the hare will be part of the Southeastern Wildlife Exposition — an exclusive and prestigious event in Charleston, South Carolina — in February.

King was raised on 78,000-acre Camp Atterbury in southern Indiana. Her father was the post commander of the Army base, where King learned to ride horses. A life-size sculpture by King of a World War II soldier now graces the base.

King got into raising champion Hackney horses and Half-Arabians, attended Ball State University and majored in art. She had planned to be a painter until she discovered the less detailed but more bold art of sculpture.

“This is more like black-and-white photography. It narrows it down to a real specific area,” King said of her artwork in a 2002 Wisconsin State Journal profile. “I want to give the impression that the animal is not static but that there’s movement.”

King began sculpting horses shortly after college when she lived in Arizona. She got her first break as a professional in 1981 when representatives for the Rockefeller Foundation saw her work at a wildlife and western art show in Minneapolis and commissioned her to do a piece.

King’s work, which is heavy into horses but also includes dogs and other animals, has been sold at world-famous auction houses such as Sotheby’s and Christie’s, been featured in museums and galleries around the country, and are centerpieces of both public and private landscapes.

But the studio could also serve as inspiration for young artists who may be unfamiliar with the sculpting process. King works with clay but others involved include those who make molds, foundry experts and welders to bring the sculptures, that can include dozens of pieces, together.

“All the kids need to see is something like that and it inspires them,” said Eric Bolland, King’s husband since 2003. “It’s a cooperative and sequential art involving teams of people, not just a single artist.”

One of the key amenities to the Paolio studio, which is open from 11 a.m. to 4 p.m. on Saturdays, is its radiant heat that emanates from the floor. It will mean more comfort for King as she works and help make the clay more workable. When she was in her garages, winter work was challenging as space heaters were barely adequate. If it’s too hot in the summer, clay can melt.

The studio also includes retail space where King displays examples of her work. Sculptures can easily cost $5,000, with full-size horses and other larger pieces going for $500,000. The shop also has more modestly priced colored drawings of horses that King has only recently began creating. They can be had for around $250.

“Bronzes are expensive, so there’s a certain clientele,” King said.

A $4,500 sculpture is based off a kit King saw of a fox facing off with a baby skunk when she was living in Kentucky. A sculpture of a set of whooping cranes she observed while on vacation in northern Wisconsin a few years ago goes for $12,000, while an ostrich hen that years ago was part of a national birds show in Wausau is $16,000. King even has a sculpture of one of the polar bears at the Vilas Zoo. She watched the bear swim and do laps to get an idea for the piece, which costs $9,500.

“As a retailer, we aren’t counting on individual sales of small pieces. We just want to make associations with potential clients,” Bolland said.

“It’s not like Art Fair on the Square where you’re just part of the mob moving around. You can come in here and have an individual relationship with each one of these pieces, read about it and see the artist making other new pieces. Art is an experience.” 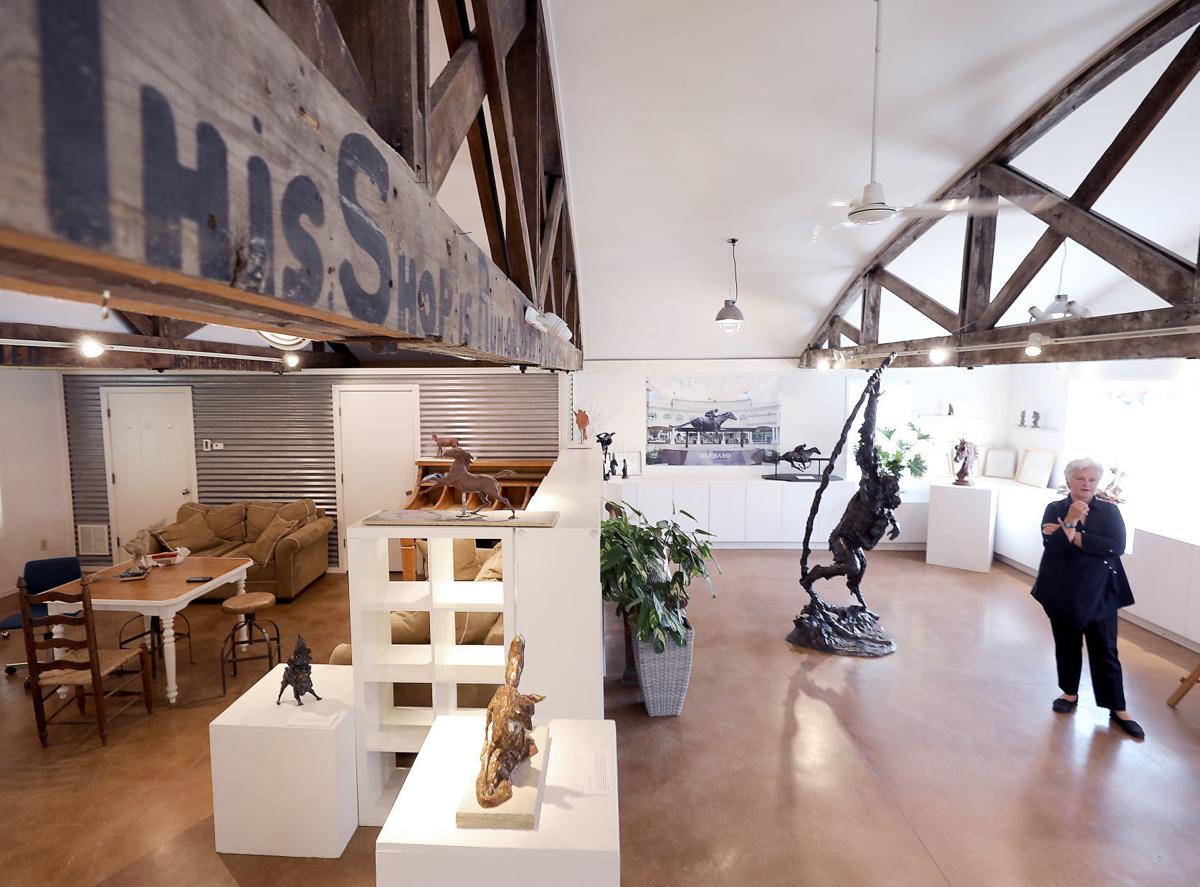 The Alexa King Studio Gallery, the newest entry into Paoli, features bronze sculptures and drawings and includes studio space for King, an internationally known sculptor. The business is located in a building that once was a service garage but more recently was home to Cluck the Chicken Store, which closed in May. 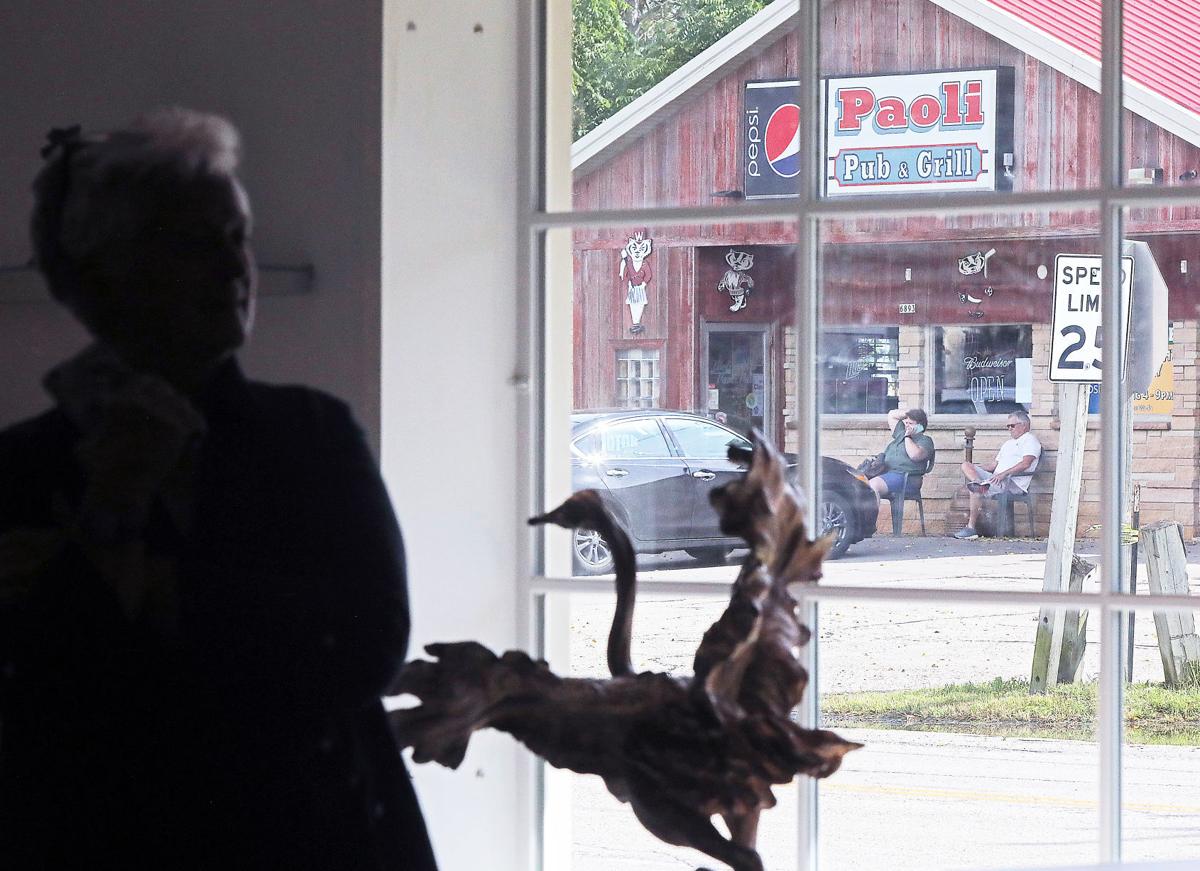 Artist Alexa King has a wide collection of horses and wildlife sculptures in her new studio and gallery in Paoli. King previously had been working out of her garage in rural Verona. The new studio will provide sculpting space and a place to meet with clients, and allow King to show off her works to those visiting the artisan community in southern Dane County. 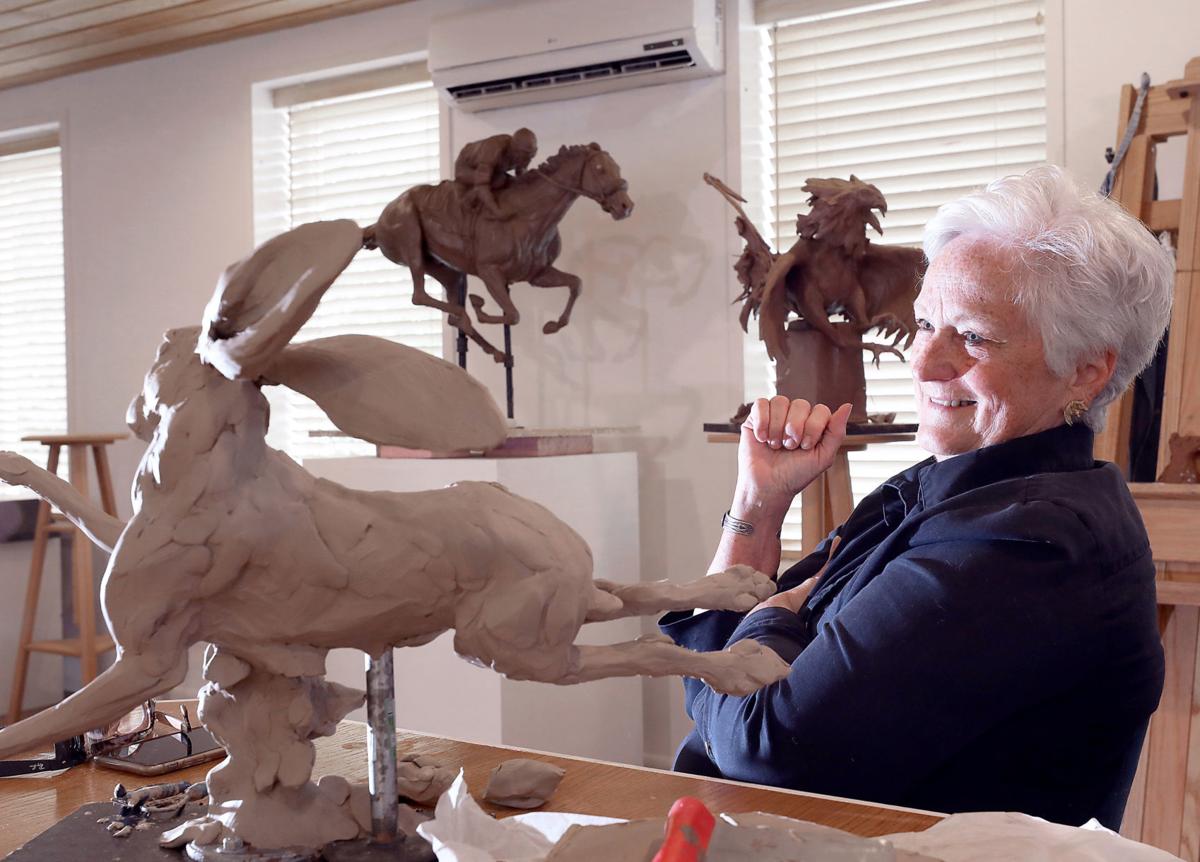 Alexa King's latest sculpting project is an antelope jackrabbit, a North American hare found in Arizona and New Mexico. King's inspiration for the sculpture comes from earlier this year when she accompanied friends who were hunting the animals with the help of a golden eagle and a Harris' hark. 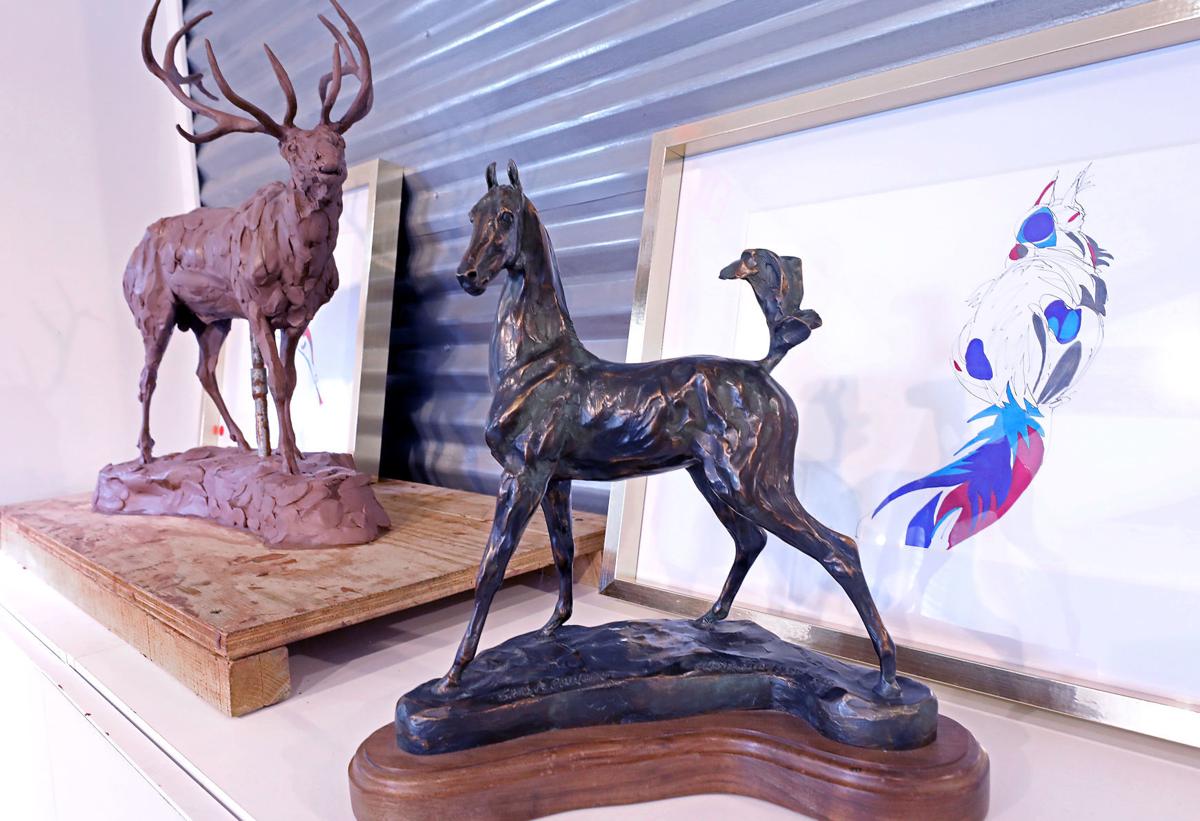 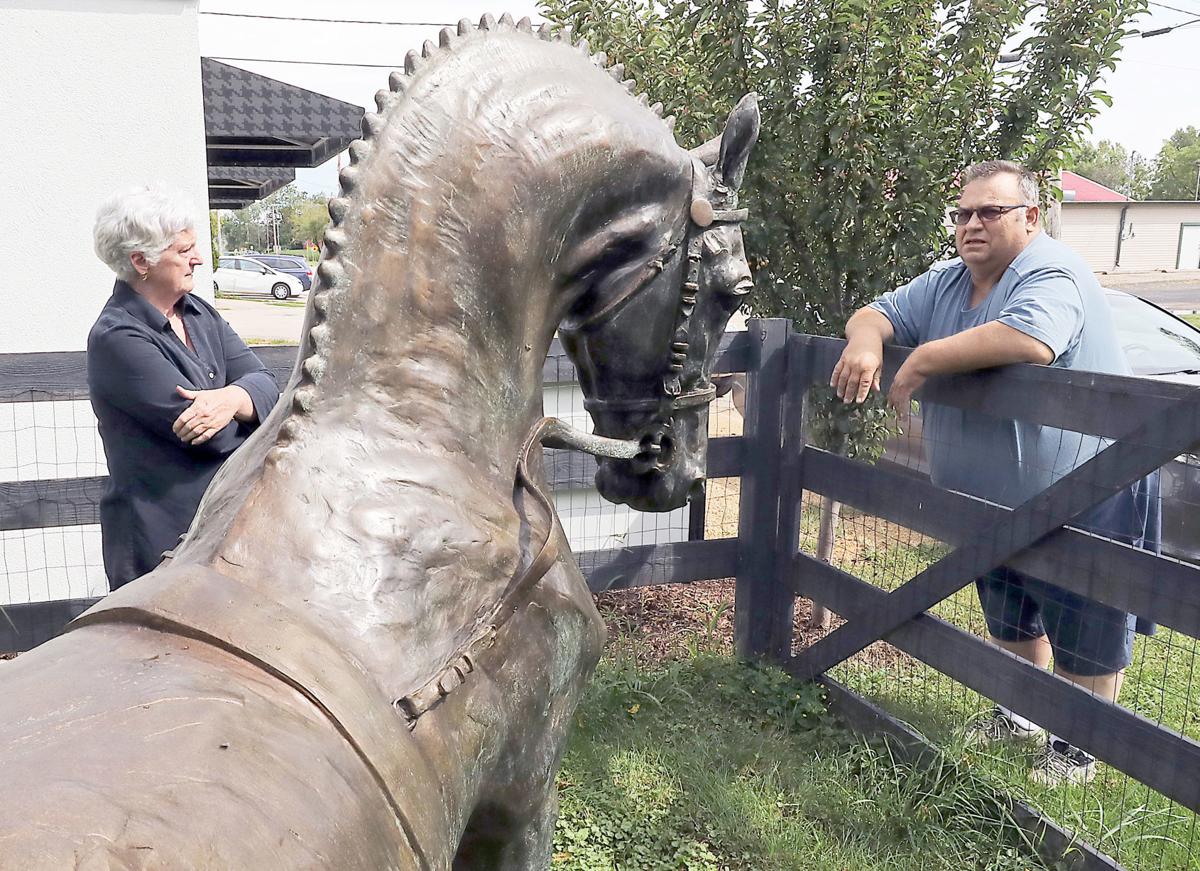 Brad Bader, right, stopped by the Alexa King Studio Gallery recently after seeing a resin horse painted like bronze outside the studio. Bader, whose family has a 12,000-acre beef cattle farm in Green County, wanted to see if King could do a whitetail deer. “It’s nice, very nice," Bader said of King's work after a quick tour of her studio. 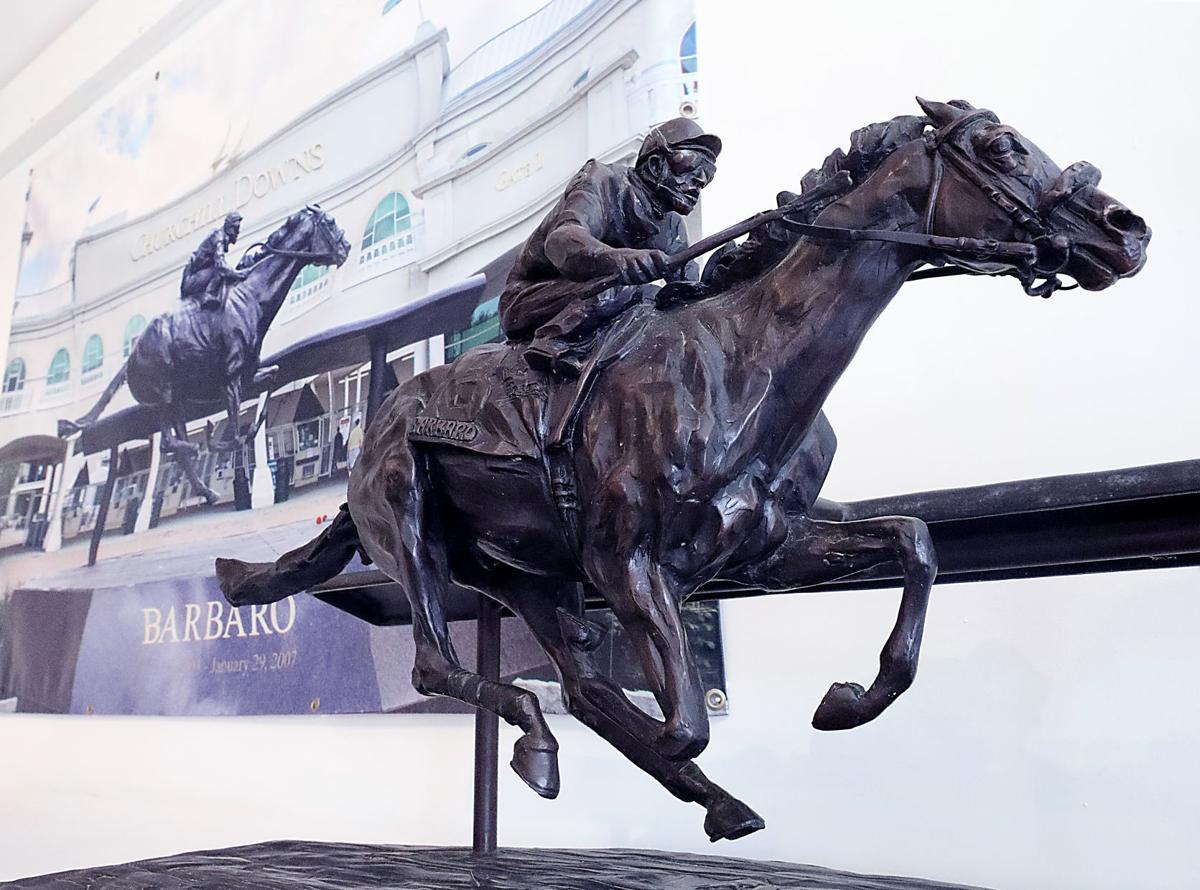 A cast of Kentucky Derby-winning horse Barbaro is displayed in Alexa King's new studio and gallery in Paoli. A much larger version was installed in 2009 in front of Churchhill Downs in Louisville, Kentucky. 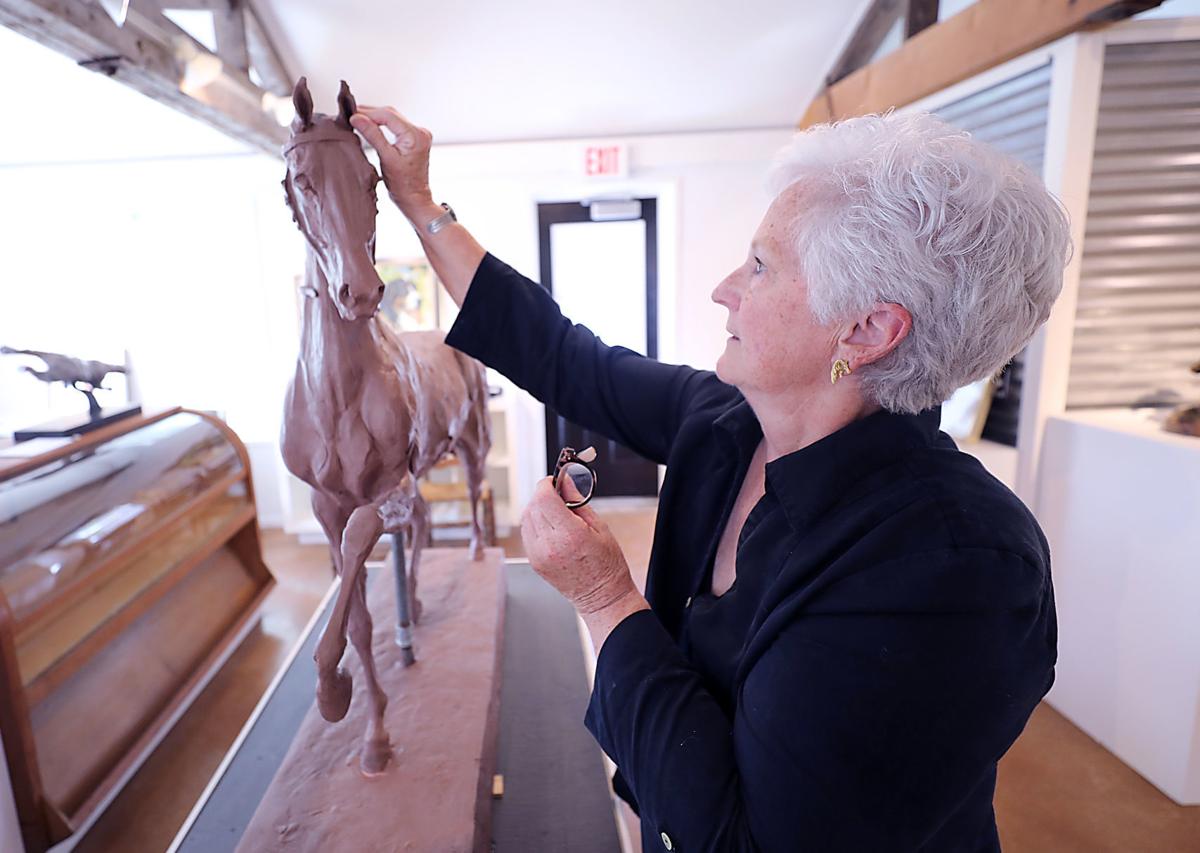 Alexa King makes a minor adjustment to a clay mold of a horse in her new studio and gallery space in Paoli. 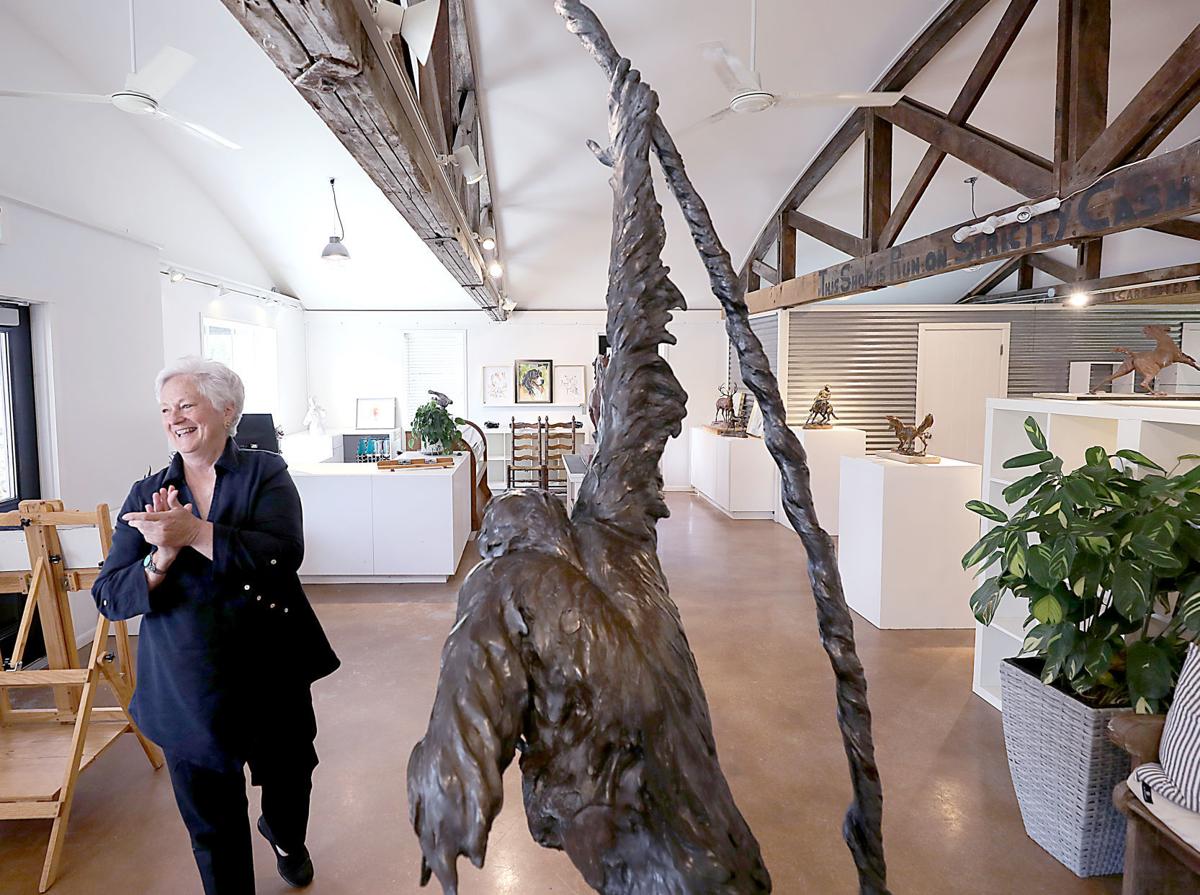 One of the first pieces of art that greets visitors at the Alexa King Studio Gallery in Paoli is an orangutan. The studio and gallery includes other sculptures along with paintings and drawings by King. 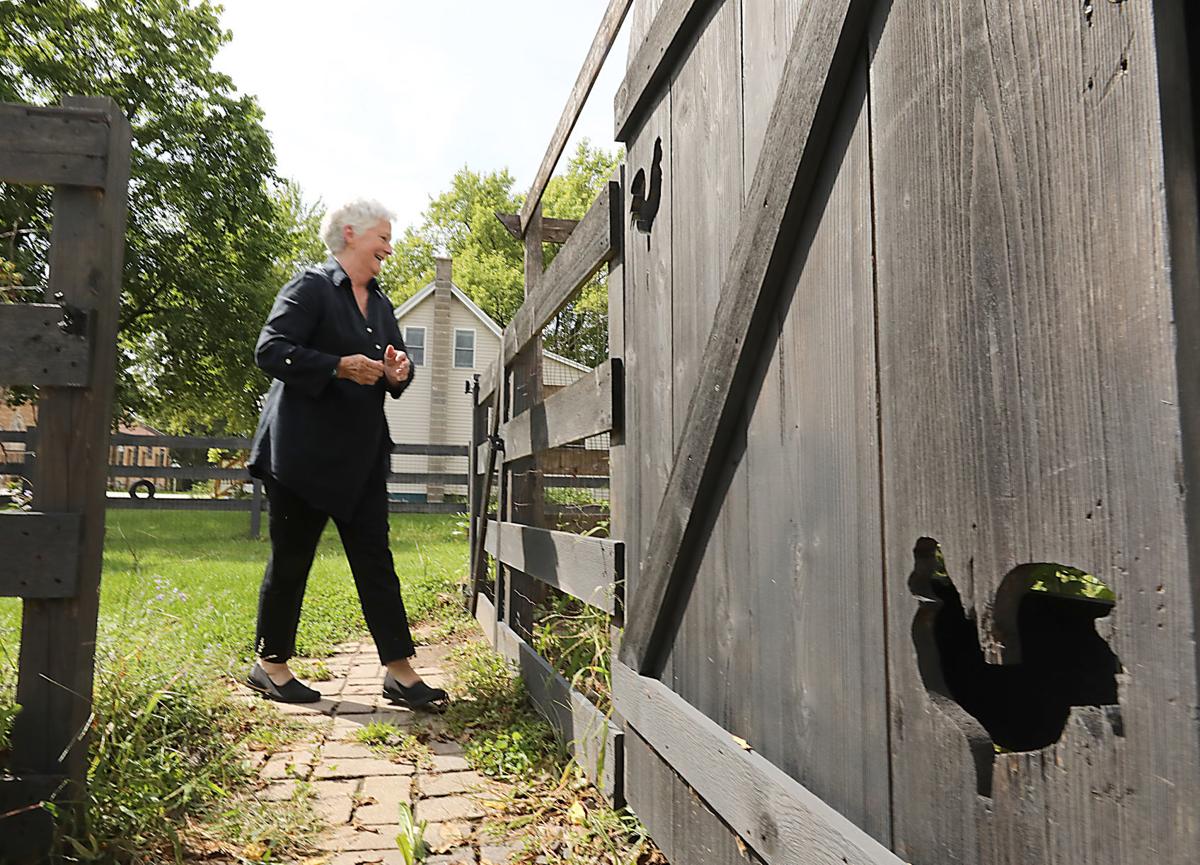 Remnants of Cluck the Chicken Store can still be found at the Alexa King Studio Gallery. The chicken business closed in May after seven years. King moved into the space in July. 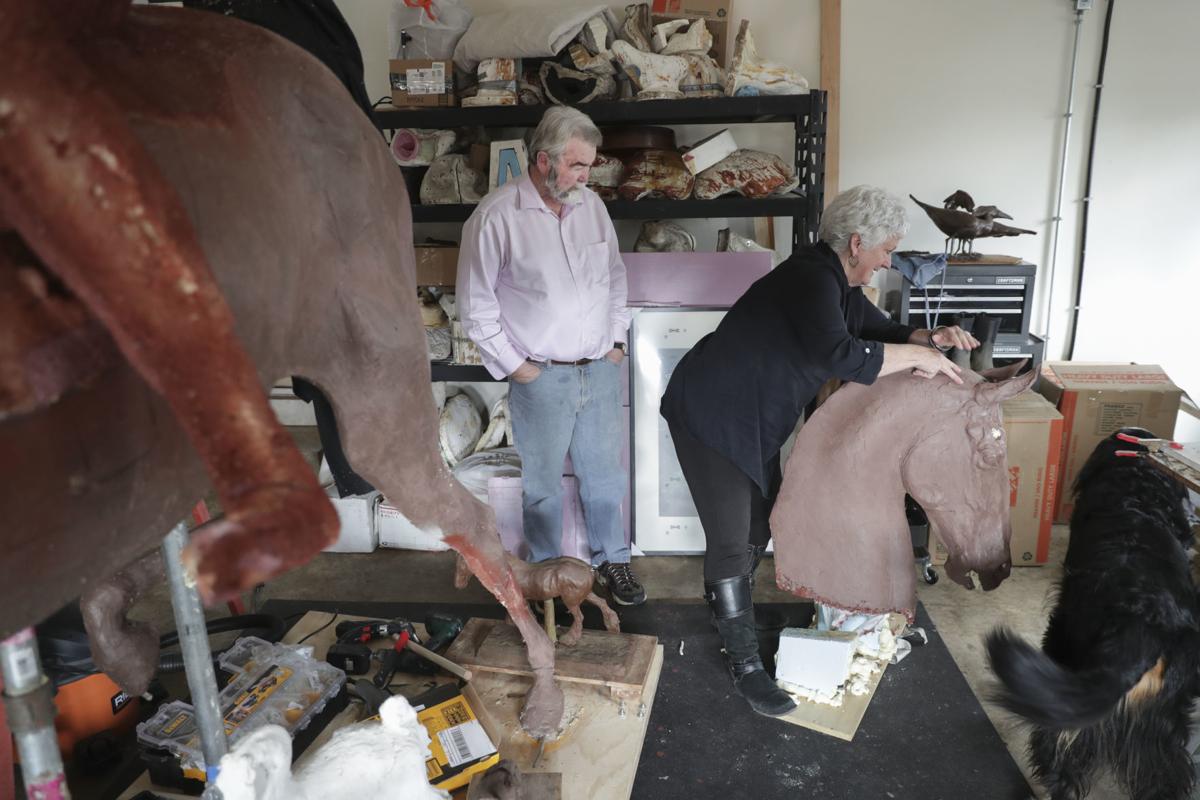 Alexa King has worked in her garage for years but now has her own studio in Paoli, an artisan community in southern Dane County. She and her husband, Eric Bolland, are seen here in 2018 in their Verona garage, which was filled with artwork, supplies and sculpting tools.