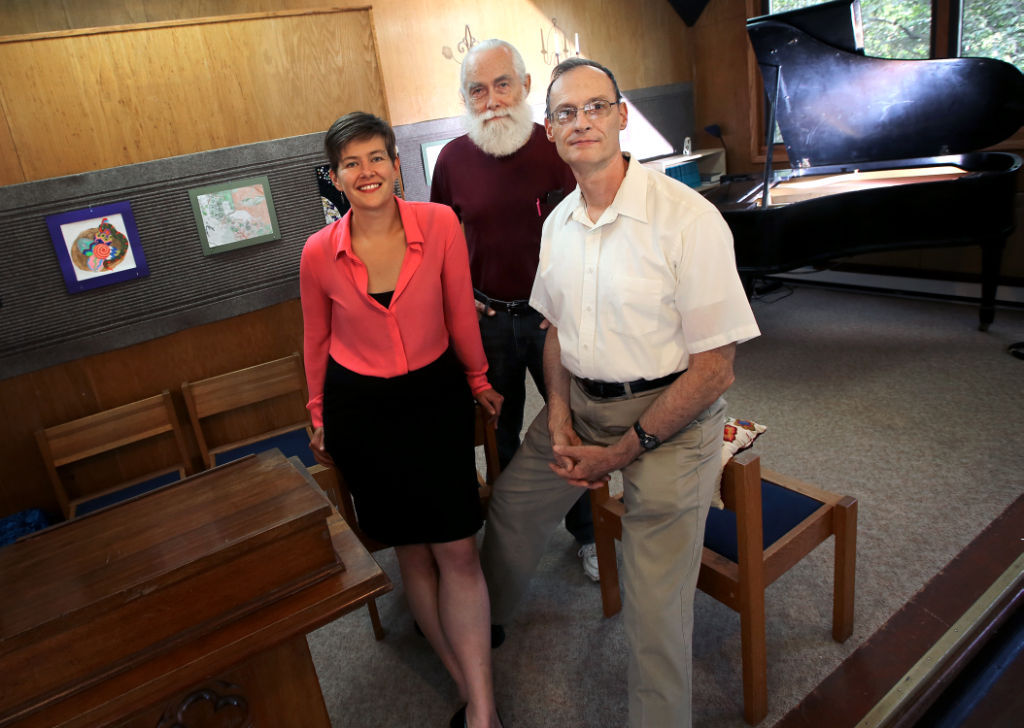 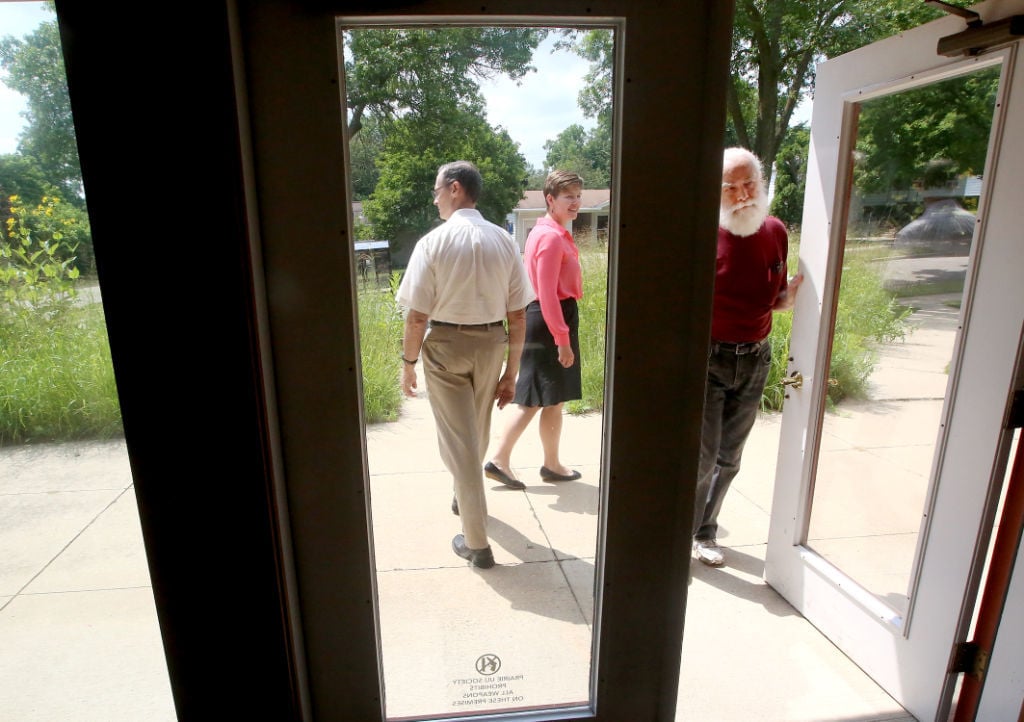 Some of the founders of the new Sunday Assembly Madison gather outside their future meeting space at Prairie Unitarian Universalist Society. From left are Eric Snyder, Naomi Kroth and Robert Park.

Growing up in Madison, Naomi Kroth attended a Christian church with her parents and loved it. Well, most of it.

As she matured into young adulthood, she encountered a hitch she couldn’t ignore: She didn’t believe in a higher power. She stopped attending services and now identifies as an atheist. Yet she still yearned for something more.

“I’ve always missed going to church — the singing, the sermon, the volunteerism, the community,” said Kroth, 30, of Madison, a project manager for a construction firm. “But I couldn’t reconcile that with my views on religion.”

The solution came by way of an international movement to create church-like experiences for non-theists. The monthly gatherings, called Sunday Assemblies, adopt many aspects of religious worship services, just none of the God talk.

Kroth and a small group of others are now bringing the concept here. Sunday Assembly Madison is scheduled to hold its first service Sept. 28 in rented space at Prairie Unitarian Universalist Society, 2010 Whenona Drive, on the city’s Southwest Side.

“We’ll be a community of like-minded people coming together to support each other and learn from each other — a godless congregation,” said Eric Snyder, 61, of Sun Prairie, a retired computer programmer and another of the founders.

The movement has elicited skepticism and outright ridicule from some quarters, but it has momentum. The local gathering is one of many Sunday Assembly startups expected to launch that same day, bringing the total number of chapters across the globe to an anticipated 100 or so by the end of the year.

“It’s fellowship without the dogma,” said Lavada Luening of West Allis, organizer of Sunday Assembly Milwaukee, which started in December. It has only a handful of core members, she said, but hasn’t done much publicity and is still building its infrastructure. The Madison founders said they don’t know how many participants to anticipate initially.

The first-ever Sunday Assembly was held about 18 months ago in London, launched by two British comedians, Sanderson Jones and Pippa Evans. In a guest column in the New York Times, the two said they started Sunday Assembly “because the idea of meeting once a month to sing songs, hear great speakers and celebrate the incredible gift of life seems like a fun, and useful, thing to do.”

There is now a nonprofit corporation in New Jersey called Sunday Assembly in America, which is providing support to existing U.S. assemblies and helping launch new ones. Its spokesman said it has filed paperwork with the IRS to become a tax-exempt public charity, although he said it has no intention of being defined as a religion. Kroth said Sunday Assembly Madison also hopes to become tax-exempt.

The two British co-founders describe a Sunday Assembly service as “part foot-stomping show, part atheist church.” The latter term was used a lot by the founders early on and drew loads of press attention. But it has caused some confusion.

For instance, the Sunday Assembly in New York City already has gone through a schism over how much to cater to an atheist audience, with some members wanting to downplay atheism and others wanting to embrace it. The two sides ultimately split, with the more hard-core atheists starting their own group called The Godless Revival.

The Madison group is sensitive to this ongoing debate. Kroth avoids saying “atheist church,” feeling it doesn’t capture the true spirit of the gatherings.

“I think atheism sometimes suggests an antagonism toward religion, which this is not,” she said. “We definitely will be non-theistic and non-religious, but our emphasis is not to promote atheism. We’re forming a congregation to celebrate life.”

The movement’s motto is “Live Better, Help Often and Wonder More.” Kroth envisions a gathering that would be just as interesting to a Catholic as to a humanist. Sermon topics might include climate change, the wonders of the universe and ethical living. Music will be pop tunes.

The guest speaker for the first Sunday Assembly Madison is scheduled to speak about humanist wedding traditions.

The Sunday Assembly concept has drawn analogies to Unitarian Universalism (UUism), a denomination with roots in liberal Christianity that has no dogma or creed and welcomes people of varied religious and non-religious views. Yet there are many differences, said the Rev. Michael Schuler, longtime pastor of First Unitarian Society of Madison.

“(Sunday Assembly) may resemble UUism in any number of respects, but there does seem to be the assumption that participants are expected to be non-believers in either a personal or impersonal deity,” he said. “This is simply not true for Unitarian Universalism, where it is clearly understood that the community consists of a mixture of folks — some of a more metaphysical bent, and others who are strict scientific naturalists, with the rest somewhere in between.”

Robert Park, 74, of Madison, a retired air pollution-control engineer and humanist, is a 38-year member of Prairie UU Society and also a founder of Sunday Assembly Madison. He intends to be part of both groups and suspects others will cross-pollinate, too.

Some atheists have rejected the idea of Sunday Assembly. Drew Miller, blogging at Policy.Mic, calls it an idea that “is making us atheists look ridiculous.”

“By modeling the Assembly gatherings after those of church, the Sunday Assembly runs the risk of implying that you still need someone else to tell you how to live,” he writes.

Dan Barker, a former pastor and now co-president of the Madison-based Freedom From Religion Foundation, said there is a huge subset of “freethinkers” who want nothing to do with anything that smacks of “playing church.” Yet others do, and that’s fine, he said.

He stressed that when nonbelievers gather, they are not copying something invented by religion.

“Those values of community and love and charity that most religions promote are not really religious values at all,” he said. “They are human values.”

What: The first monthly service of Sunday Assembly Madison.

In the Spirit: Madison atheist group gives $20,000 to Charlie Hebdo

The Madison-based Freedom From Religion Foundation (FFRF) said today it is giving $20,000 to the Parisian satirical magazine Charlie Hebdo "in…

Some of the founders of the new Sunday Assembly Madison gather outside their future meeting space at Prairie Unitarian Universalist Society. From left are Eric Snyder, Naomi Kroth and Robert Park.