Twelve women who allege that a former staffer for an Oregon marching band groomed them while they were still students, with many reporting the staffer started sexual relationships with them shortly after they turned 18, released a statement late Monday evening calling the man’s actions “perverse and revolting.”

“The relationships David (Henzie-Skogen) cultivated with us were predatory, sexual and abusive,” they said. “These relationships were not in any way romantic, and David took advantage of adolescent girls solely for his personal, sexual gain.”

The Oregon-based Shadow Drum and Bugle Corps — an independent, competitive marching band organization that includes some students from Oregon High School but is not affiliated with the school — announced earlier this month that Henzie-Skogen, 42, had been dismissed in May over the alleged inappropriate grooming behavior.

Since the announcement, one of the women reported that Henzie-Skogen started a physical relationship with her while she was still 17, former corps director Rebecca Compton-Allen said. It was previously believed that all of the alleged sexual acts happened after the students became adults.

The total number of women who have reported being groomed by Henzie-Skogen is now 13, but one of those women was not involved with writing the statement, Compton-Allen said.

“(Henzie-Skogen) is a danger to any community he is part of, and we believe that no mercy should be had when condemning him now and for the future,” they said.

Henzie-Skogen did not respond to a phone call and email requesting comment Tuesday. He is also part of a Madison-based jazz, punk and hip-hop band Youngblood Brass Band.

The alleged grooming behavior dates back to 2007, when Henzie-Skogen would have been in his late 20s, and went through this year. Corps president Ken McGlauchlen said the corps has “investigated and confirmed” a pattern of Henzie-Skogen becoming friends with the students, making sexual comments to them, sending them inappropriate messages via text and email, and then starting a physical relationship with them as soon as the students were out of the Shadow Drum & Bugle Corps program.

The women, who have now been brought together and are sharing their experiences with each other, said he used the same methods against them all for at least 14 years. They said Henzie-Skogen used his position as a successful musician to draw young women in and “prey upon adolescent girls under his authority for his own sexual gratification.”

They said Henzie-Skogen’s grooming behavior extended outside of the Shadow Drum and Bugle Corps organization as well. They allege he sought out young and vulnerable girls on social media to manipulate and abuse them.

They also said adults who are part of the marching band organization need to reflect on how this abuse went on for so many years, and how systems need to change.

“It is certain that David’s predatory and manipulative behavior was simply avoided and ignored by observers, as this was someone who preyed upon girls very shamelessly,” they wrote.

In one instance, Henzie-Skogen began private messaging a female student when she was just 14 years old, Compton-Allen said.

“The stories I hear and the screenshots I see are repulsive, and absolutely outside the bounds of ethical behavior between a teacher and a student or even a teacher and a former student, and outside of our code of conduct at Shadow,” Compton-Allen said.

“In the purest form, David is a sexual predator, and he abused his status as an instructor and mentor,” they said.

Editor's note: This story has been updated to correct the number of women who signed the statement. Thirteen women have reported being groomed by Henzie-Skogen, but the statement was signed by 12 of them. One of the women was not involved in writing the statement. 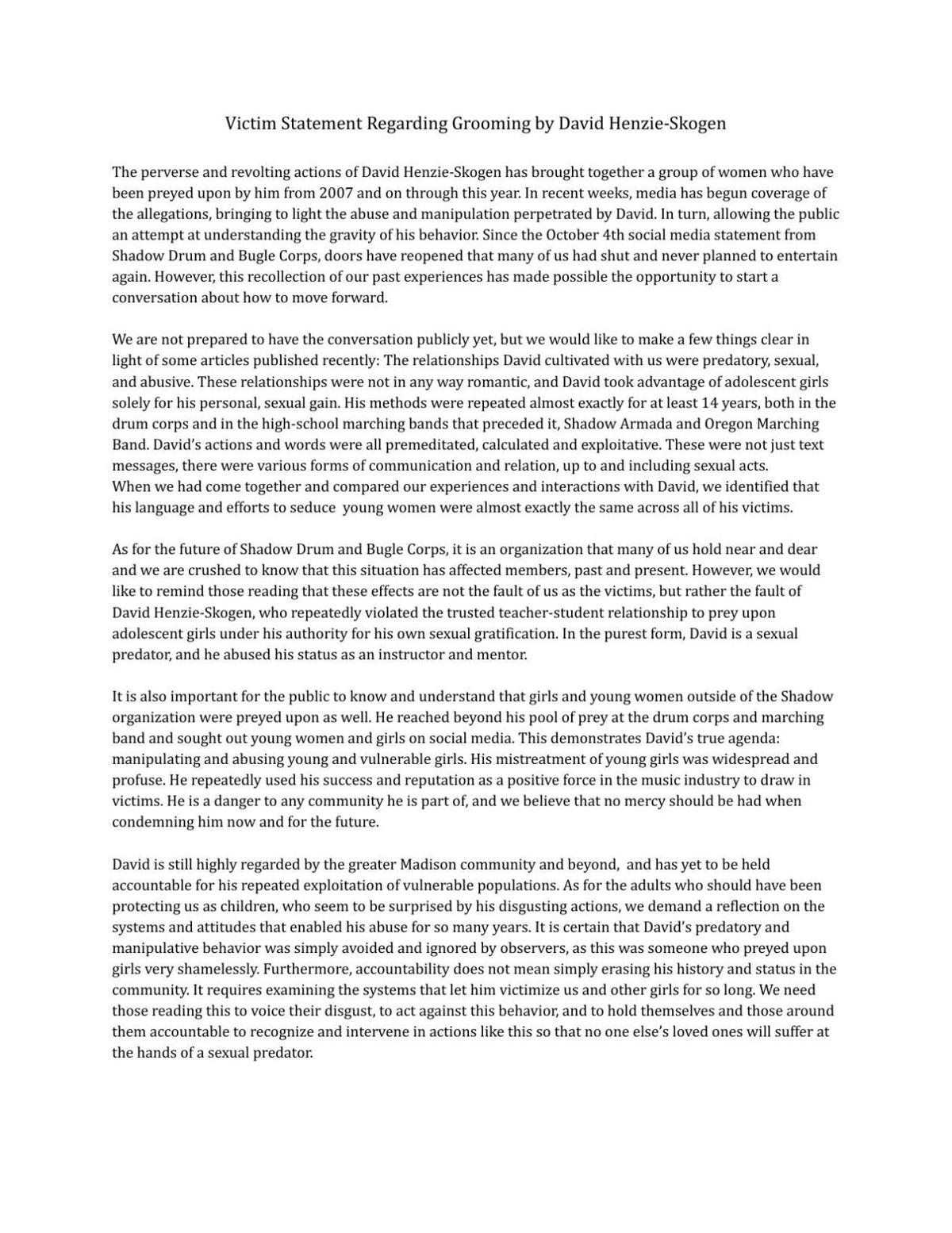