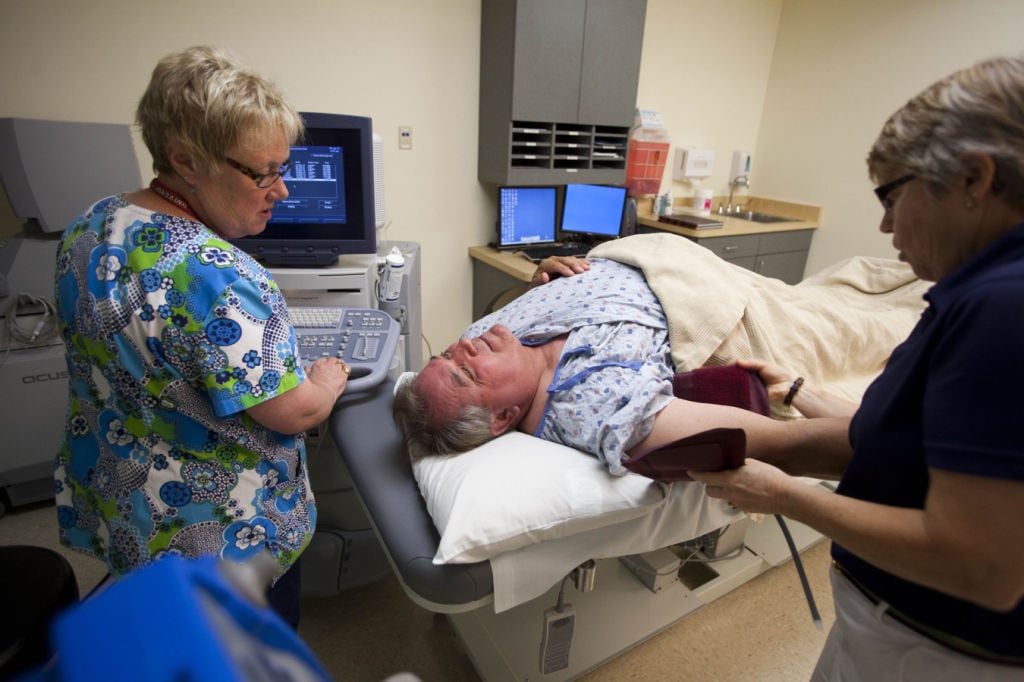 Researchers prepare Glen Henderson of Mazomanie, a participant in a long-term study of sleep habits at UW-Madison, for a test of his overall health at UW Hospital as part of the study. "I think sleep is something people take for granted," he said. "Then all of a sudden, they're not sleeping well, and they wonder what happened." 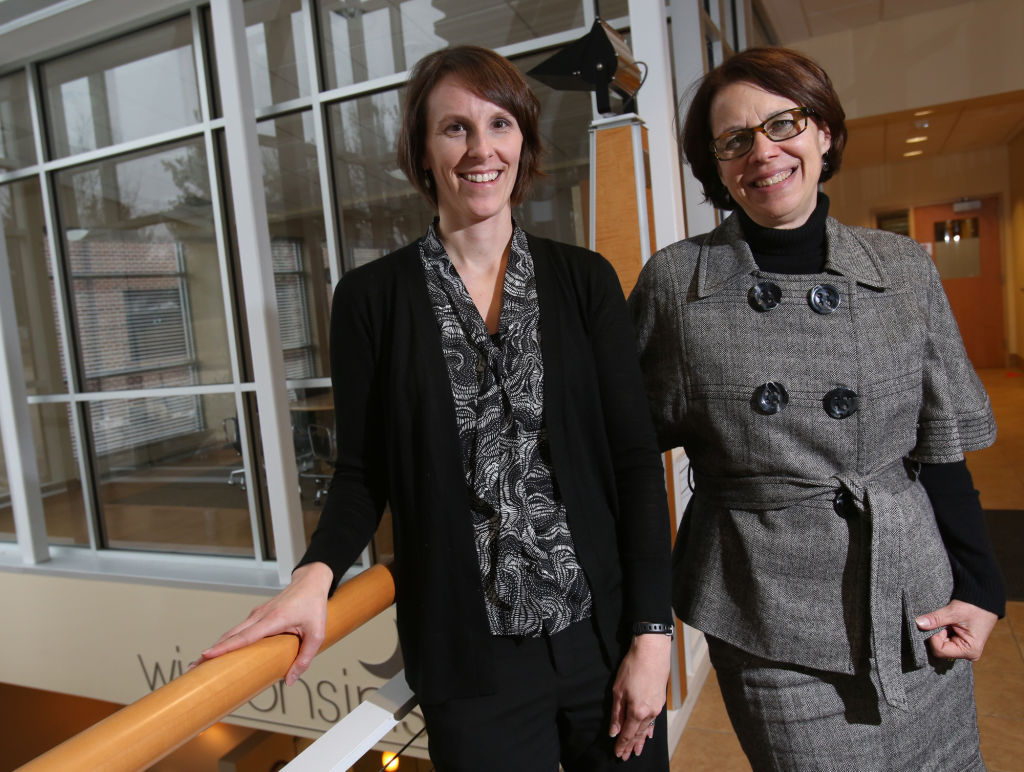 Meredith Rumble, left, a UW-Madison researcher, and Ruth Benca, a neuroscientist, work to find solutions for people with sleep disorders. Benca is director of the Wisconsin Sleep Clinic in Madison. Rumble is the clinic's lead psychologist.

A couple of Saturday nights ago, Steve Grahn took in the Christmas show at the Fireside Dinner Theatre in Fort Atkinson.

It was a great evening — beautiful costumes, spectacular music — but he didn’t get back to his Mount Horeb home until after midnight. It made for a short night, because he awoke at his usual time of 5:30 a.m.

For Grahn, who struggles with an overactive mind and says he tends to be high-strung, that was a problem. Without enough sleep, his other stress-management tools don’t work as well.

“I’m definitely more emotional the next day when I don’t get enough sleep,” said Grahn, 59, who drives a van for children with special needs in the Mount Horeb School District. “It changes everything, from my eating habits to having enough energy to exercise.”

The benefits of a good night’s sleep have long been touted — see early-to-bedder Ben Franklin. But only recently, with the recognition of sleep medicine as an important scientific specialty, has the research begun catching up with the adages.

“We know that even at six hours of sleep at night, you can start seeing impairment, particularly in young adults,” said Ruth Benca, a UW-Madison neuroscientist and director of the Wisconsin Sleep Clinic. “Your emotional regulation is going to be off, your thinking isn’t as flexible, and you’re not going to respond to stressful situations as well.”

Put another way: “When you’re sleep-deprived, everything gets out of whack,” said Shilagh Mirgain, a UW Health senior psychologist.

The connection between poor sleep and stress is a tight one. Each can trigger the other.

Mary Howick, 59, who works in the health care field in Madison, said stress in her life made it difficult to sleep, which in turn stressed her out even more.

“Part of the anxiety and worry became, ‘Oh, I’m going to feel terrible tomorrow,’” said Howick, who went through a difficult job loss this year.

What is the perfect amount of sleep per night?

The federal government recommends at least seven hours for adults, but sleep is a very individual thing, said Meredith Rumble, a UW-Madison researcher and lead psychologist for the Wisconsin Sleep Clinic. Every time there’s a media report about the need to get seven or eight hours of sleep each night, Rumble said she gets panicked inquiries from people worried they aren’t meeting the recommendation.

“And that can cause anxiety and stress, too,” she said. “There are long-sleepers and there are short-sleepers. We have people fill out sleep logs to figure out what works best for them.”

But overall, most people need more sleep than they get, she said.

Our grandparents did better at this. In 1942, 84 percent of survey respondents told Gallup they got at least seven hours of sleep per night. Now, 59 percent do, and 14 percent say they get five hours a night orless.

“When people have a lot to do, sleep tends to be one of the first things to get the axe,” said Paul Greblo, a psychologist with Dean Clinic who consults on cases at the St. Mary’s Sleep Center in Fitchburg. “On any one night, that’s not a huge deal. When it becomes part of a lifestyle, it can really create problems.”

For decades, people have sought to get away with less sleep.

There was even a student group at UW-Madison in 1900 called The Society for the Abolition of Sleep.

It’s unclear what happened to the student members. Maybe they quickly perished. In one classic rodent experiment from the 1980s, total sleep deprivation resulted in the death of all rats within three weeks.

More recently, Benca and her colleagues found that sleep-deprived rats dramatically increased their food intake, and that their brains actually changed in a way that made them eat for pleasure, not hunger.

Too little sleep may be contributing to an obesity epidemic, experts theorize, and people who get insufficient amounts are more likely to suffer from chronic diseases such as hypertension, diabetes and depression, according to the Centers for Disease Control and Prevention.

“We have this attitude as a society that people who sleep too much are lazy and that the real go-getters are burning the candle at both ends,” Benca said. “Now we’re starting to understand that people who are sleep-deprived aren’t as productive, and that they risk serious health problems.”

Barbara Loye, a retired social worker, typically gets eight hours of sleep now, a welcome luxury compared to the five or six hours she managed when she worked full time.

“I do believe I was sleep-deprived,” said Loye, of Madison. “I would get pretty tired by the end of the day, and by the weekend, I’d have to take long naps to catch up.”

Yet retirement doesn’t usher in better sleep for everyone. Glen Henderson, of Mazomanie, said he slept more soundly when he was working eight to 10 hours a day for the state Department of Corrections.

“I still fall asleep very efficiently, but staying asleep is a problem,” he said. “I wake up in the middle of the night, I roll over and try to go to back to sleep. Sometimes I’m successful, sometimes I’m not.”

He attributes it to changes in his body as he’s aged, and more time to think and worry.

Prior to electricity, our ancestors pretty much had to go to bed when it got dark. Now we have all sorts of new devices keeping us up late, and that can be a problem.

“We’re seeing people just not unplug at night — they’re reading their tablets and checking their emails and texts,” Mirgain said. “It’s disrupting our circadian rhythms and taking a physiological toll on our bodies.”

If you’re using a tablet or laptop computer in bed, you’re getting light exposure, which tells your body to be awake, Rumble said.

“That develops a pattern of not only being awake at night, but of being very alert and doing engaging things,” she said. “Sleep is not the time to be productive, and that’s a hard switch for people to turn off.”

If Grahn feels he’s going to have a difficult night of sleep ahead because his mind is racing, he will sometimes write down what’s bothering him, then torch the paper and toss it into a coffee can.

Paul Greblo, a psychologist with Dean Clinic, hopes people will make sleep a priority in their lives in the new year ahead.

"Without enough sleep, we may be more irritable and we may not have the emotional resources to cope as well as we might normally would," he said.

1. Establish a regular routine that includes going to bed and getting up at the same time every day, even on weekends.

2. Do the same things in the same order before going to bed to cue your body to slow down and relax.

3. Use your bed for sleeping and sex only. Doing other activities in bed, such as working or paying bills, only serves to initiate worry and concern.

For help managing stress, consider discussing options with your primary physician. Also, many employers and health insurance plans offer confidential help lines for people who are having trouble coping or feeling overwhelmed.

8 ways to fall back asleep after waking in the night

Here are eight tips from sleep and anxiety experts on how to shut down that whirling dervish of a brain and coax your body back into much-needed sleep.

Dr. Zorba Paster: Patients should have a right to medical marijuana to control pain

It’s a touchy subject, but then again so was hospice when it first started.

As officials and health experts race to get Americans vaccinated against Covid-19, some Catholic bishops have weighed in to discourage Church members from getting the latest, single-shot vaccine from Johnson & Johnson when alternatives are available.

Doctors sometimes recommend that people under 60 wait to get a knee replacement because these joints typically last only 15 to 20 years.

The US just added another powerful tool against Covid-19 to its inventory: a third vaccine.

While tens of thousands of Americans are infected with the coronavirus each day and more research suggests variants threaten another surge, some state leaders are loosening Covid-19 restrictions against the recommendations of health experts.

We’re living longer and, unfortunately, the older you get the greater the risk.

What women should know about their heart health

While women's heart care has significantly improved in the past 20 years, there is still much to learn about heart disease in women.

Talking on the phone for 10 minutes could make you feel less lonely, study says

Talking to someone on the phone for 10 minutes multiple times a week — if you're in control of the conversation — can decrease loneliness, a new study revealed.

Flavanols give fruits and vegetables their bright colors and are found in tea and cocoa. Research shows they appear to improve blood flow to the brain.

Researchers prepare Glen Henderson of Mazomanie, a participant in a long-term study of sleep habits at UW-Madison, for a test of his overall health at UW Hospital as part of the study. "I think sleep is something people take for granted," he said. "Then all of a sudden, they're not sleeping well, and they wonder what happened."

Meredith Rumble, left, a UW-Madison researcher, and Ruth Benca, a neuroscientist, work to find solutions for people with sleep disorders. Benca is director of the Wisconsin Sleep Clinic in Madison. Rumble is the clinic's lead psychologist.