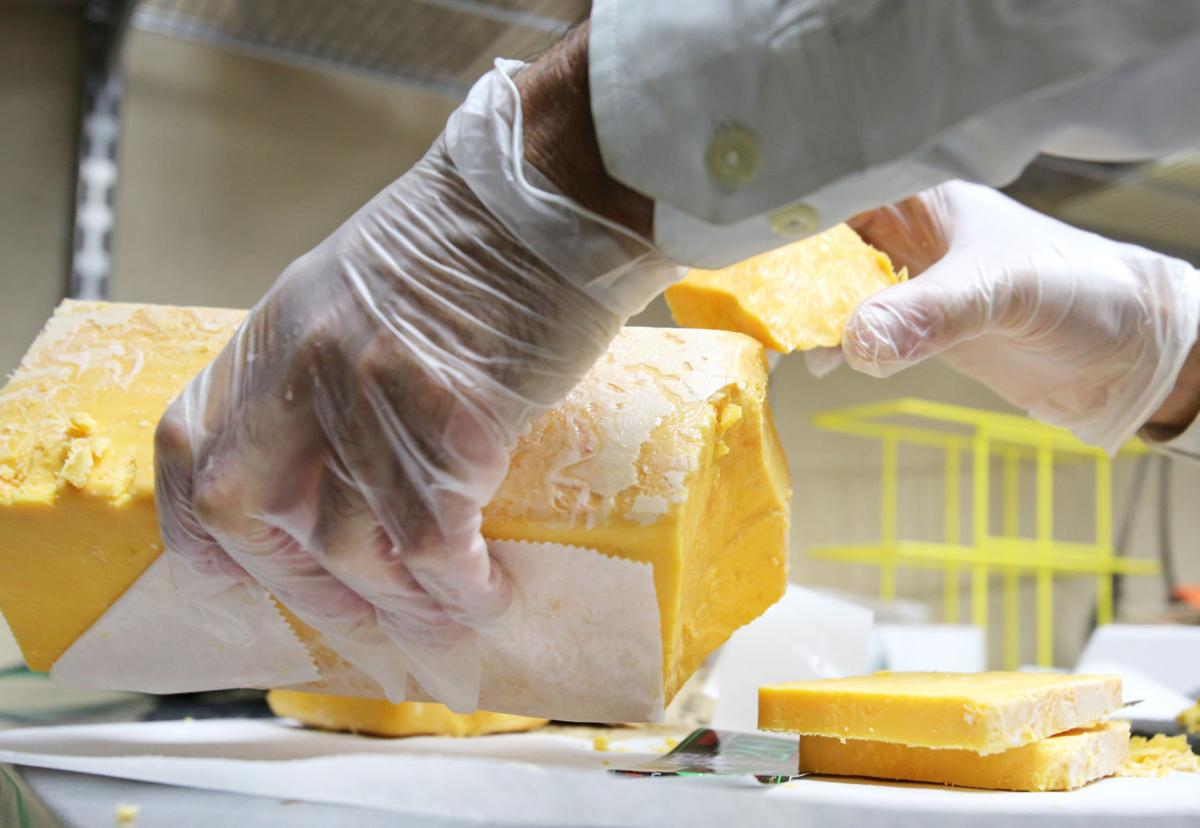 Ken Monteleone, owner of Fromagination, prepares to slice a block of Hook's 20-year cheddar cheese to package for his customers at his shop on Capitol Square. Monteleone fielded calls for the cheese, made by Hook's Cheese Co. of Mineral Point, from all over the U.S. He even got calls from England, but the store doesn't ship abroad. 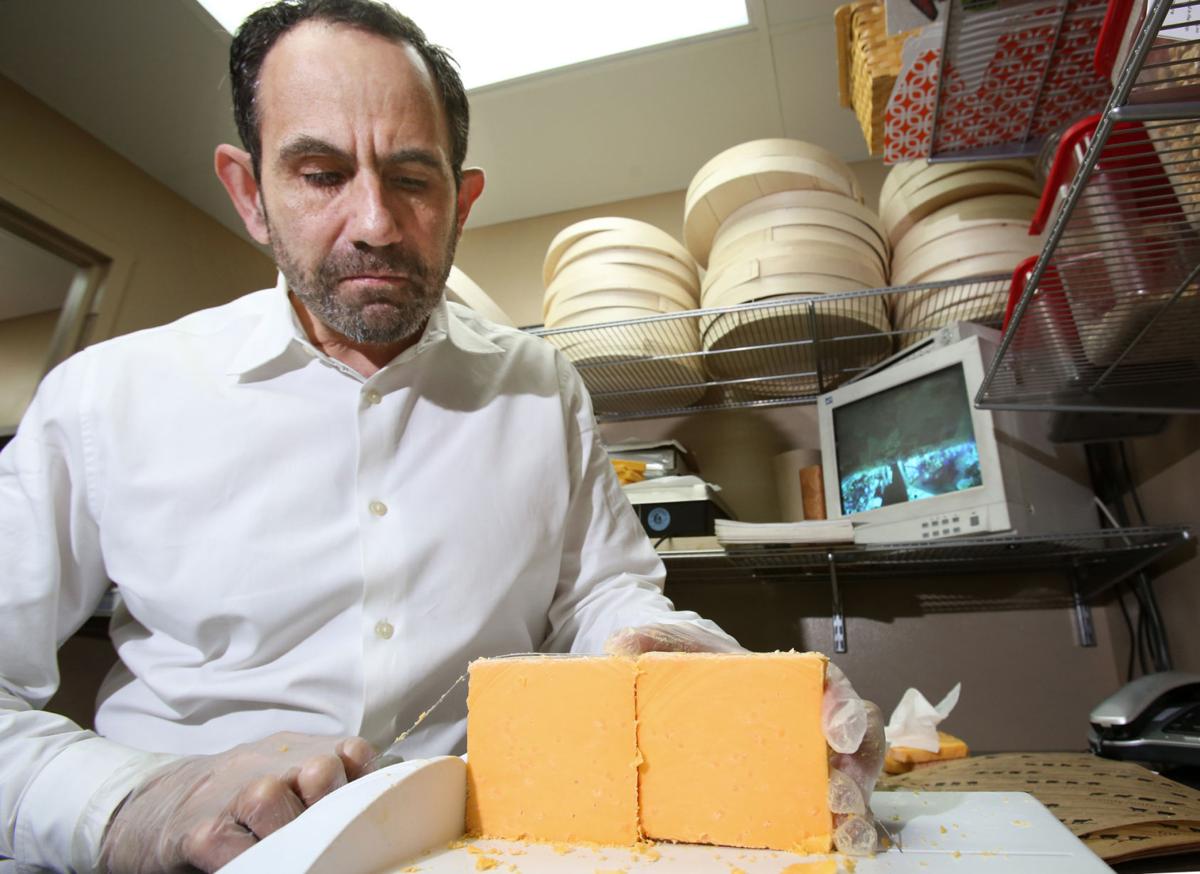 Ken Monteleone, owner of Fromagination, slices a block of Hook's 20-year cheddar cheese at his shop. At $209 a pound, every crumb counts. "It's like being a surgeon," Monteleone said. 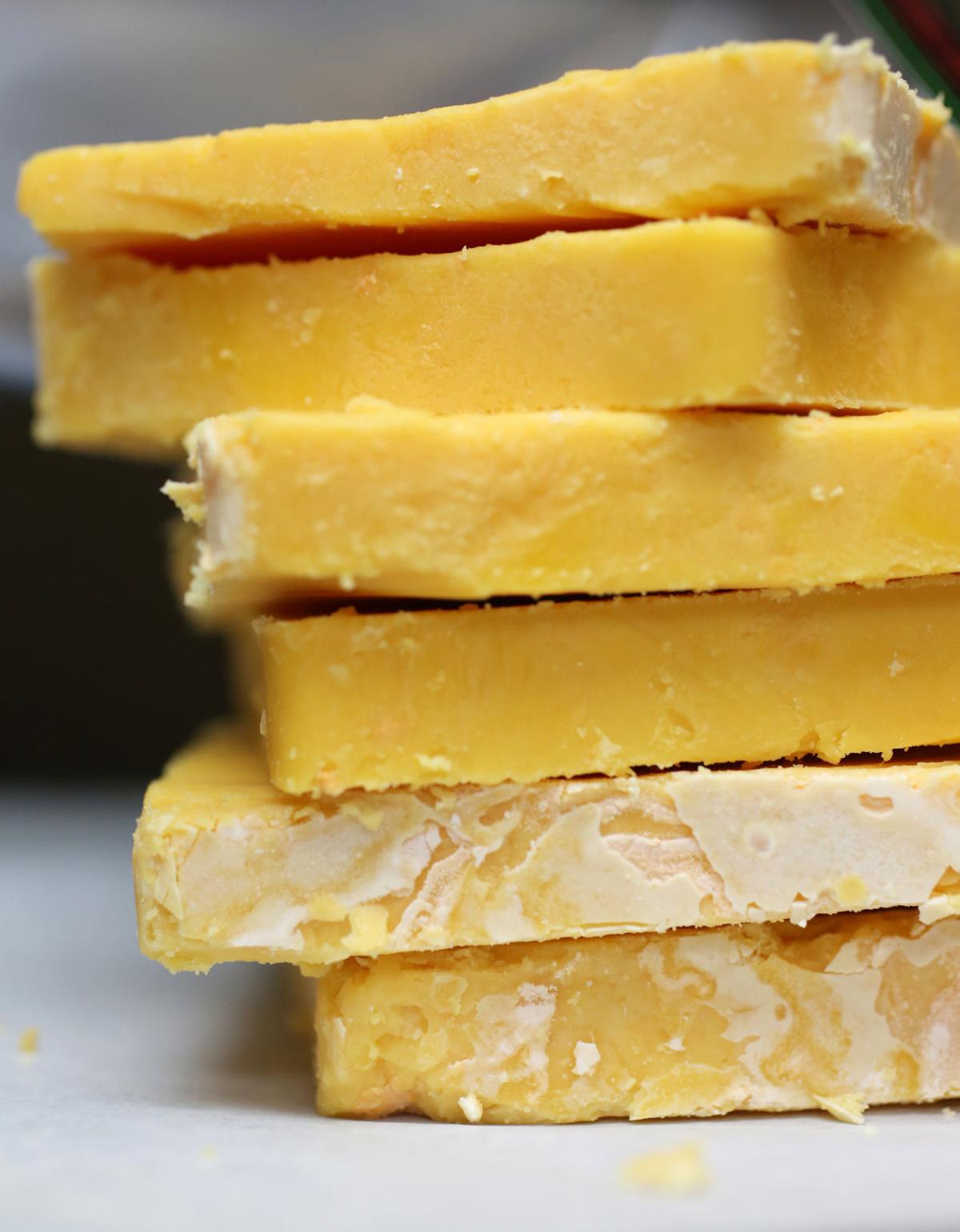 Slices of Hook's 20-year cheddar cheese to be packaged up for customers at Fromagination. Because of the price, most customers ordered the cheese in quarter-pound portions. 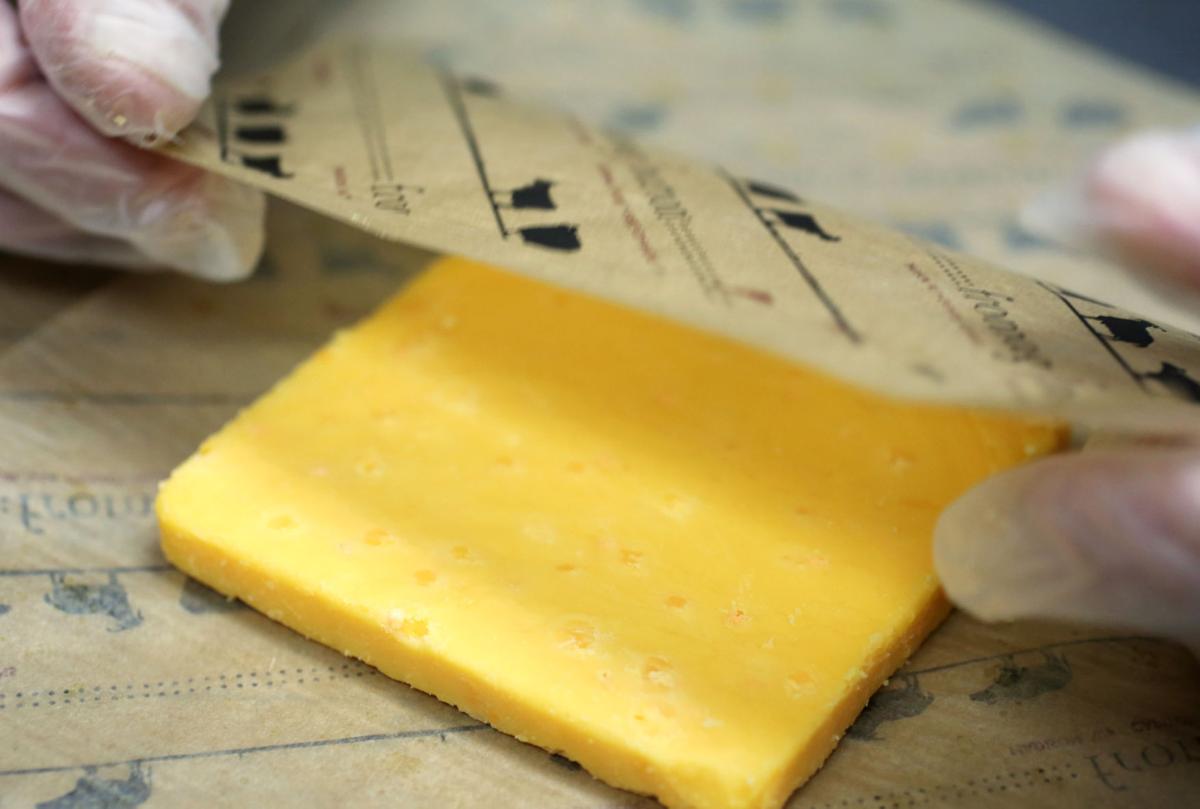 Only in Wisconsin can hearts be broken by cheese.

And they will be, bit by bit, in the coming days as people who missed out on an opportunity to order 20-year cheddar ahead of time realize they’ve pretty much lost the chance.

As Hook’s Cheese Co. of Mineral Point debuts its much-anticipated cheese this week, most of the 450-pound supply has already been spoken for. Retailers quickly filled allotments when news of the aged cheddar became public during winter.

“It’s like a milestone in the cheese industry,” said Ken Monteleone, owner of Fromagination cheese shop on Capitol Square.

At $209 a pound, the cheese won’t be a wish every food lover will be able to fulfill. Yet, it’s something that will benefit the state. Cheese makers Tony and Julie Hook are donating $40,000 from the cheese sale — half its revenue — to the Center for Dairy Research and Babcock Hall building project underway on the UW-Madison campus.

That was the plan all along if he could get the cheese to 20 years, Tony Hook said.

“The dairy center has done so much good, we’re trying to help,” he said. “They’re helping future generations and even our generation now.”

If people try it or not, the 20-year cheddar’s arrival is a headline-grabbing way to illustrate the skills of cheese makers in Wisconsin and beyond.

“We’re talking about less than 500 pounds of cheese, yet we’re talking about it,” said Patrick Geohegan, Wisconsin Milk Marketing Board spokesman. “I think it points to the innovation and creativity of our cheese makers.”

There is some hope for those who still want to get their hands on some.

In divvying up the cheese for packing and delivering, Hook discovered he had 20 pounds still available. He’ll sell that at his shop in Mineral Point beginning Friday and at the Dane County Farmers’ Market on Saturday. The Hooks won’t sample the 20-year at their stand like they do with their other cheeses.

Cheese retailers and restaurant owners believe the price tag to be fair, because Hook sat on a product he could have sold long ago.

“It’s really saying something that he took care of this cheese for 20 years,” said Steve Ehlers of Larry’s Market in Brown Deer, which like Madison-area cheese retailers took orders from all over the U.S.

The blink-or-you’ll-miss-it nature of the 20-year cheddar helps create an event around cheese, and that’s good for the whole industry, said Gordon Edgar of San Francisco, author of “Cheesemonger: A Life on the Wedge.”

“What I like most about these kinds of things is it’s a small-run limited edition and that shows the nature of cheese,” said Edgar, whose new book, “Cheddar: A Journey to the Heart of America’s Most Iconic Cheese” will be released in October. “It doesn’t matter how much you like a 20-year cheese because you know what? You get it now or you don’t get it.

“Cheese isn’t something that’s made on demand. You just can’t create more of an aged cheese.”

Tory Miller, chef and owner of L’Etoile, Graze and Sujeo, compared the arrival – and price – of the cheese to morel mushrooms at the farmers’ markets in the spring.

“The farmers sell them by the quarter pound for like $15, so people buy a bag and it’s expensive but a special ingredient,” he said. “The same for the 20-year. People see the price per pound and get sticker shock, but it’s worth it if you can get a quarter or eighth of a pound.”

Miller said the cheese would be best in tiny increments anyway, like a truffle would be, as a finishing ingredient such as shaved over buttery fresh pasta, or sliced thinly over a runny egg.

At L’Etoile, Miller said, it will be used on dishes such as a beef tenderloin carpaccio, simple flavors that make the cheese stand out. And while the cheese is difficult to shave because it is so crumbly, that finishing touch will be something diners can watch.

“We’ll do a table-side presentation so people can really get an experience,” he said.

Most people who bought the cheese know it wasn’t created for soup or sandwiches, and most only ordered a quarter-pound size that doesn’t lend itself to much more than nibbling.

Steve Zach of Oregon hasn’t even tried Hook’s 15-year cheddar that created a stir when it debuted in 2009, but ordered some of the 20-year.

“I thought it would be kind of fun to taste it,” he said. “It’s fun to be in that sort of hubbub and see what all the fuss is about.”

Zach joked that he and his friends were going to “wait until there’s a solstice eclipse, dress up as druids and after we’re done shape-shifting, we’ll somehow worship a quarter-pound piece of cheese.” In reality, he figures he’ll try it with a group of friends who also sample bourbons and rye whiskeys.

“I think we’ll buy something high-end to try when we worship the cheddar,” he said.

Jeanne Carpenter, Metcalfe’s Market specialty cheese manager, said one customer told her he wanted to buy 2 pounds to keep in his refrigerator for two years to create a 22-year-cheddar.

“I was like, ‘Dude, if Tony Hook is selling this cheese now, it’s because it’s peaking,’” she said. “It’s not going to get any better than it is now.”

Hook, 63, so far isn’t planning to make any more 20-year cheddar. He said it’s possible some of the current 10- or 12-year might be set aside, but figured he’d be retired by the time it hit store shelves. He said his company’s cheeses are made moist enough that though they crumble and harden as they age, they remain creamy and flavorful.

“Who knows?” he said. “Maybe if you aged it 100 years it would be a solid rock and you’d have to lick it to see what it tasted like.”

It’s not officially a once-in-a-lifetime chance for cheese lovers, but possibly. And it’s not a hopeless cause for those who haven’t gotten in yet, as cheese retailers expect some people won’t pick up the cheese they ordered for a variety of reasons.

But Geoghegan says it’s a big deal for the state and its cheese makers even if people pass it by because of the price or if they don’t get the chance to try it.

“Isn’t it exciting that there’s so much interest in a product that is hand-crafted like this?” he said. “I find it just amazing. We live in a special place.”

The majority of Hook's 20-year cheddar has been sold ahead of time by cheese retailers with waiting lists. However, about 20 pounds is still available through Hook's Cheese Co.

The Hook's factory store at 320 Commerce St. is open from 4 a.m. to 2 p.m. Friday, and the Hooks will be selling at the Dane County Farmers' Market on Capitol Square on Saturday. They'll take orders that can be picked up by calling 608-987-3259.

For those who want something to complement the 20-year or can't get it, Fromagination, at 12 S. Carroll St., is offering what it calls a "Flight of Delight." The flight includes Hook's cheddar cheeses aged 3, 5, 8, 10 and 12 years, along with tasting notes. It sells for $40 for quarter-pound sizes of each, and is also available and half- and full-pound sizes. It can be ordered by calling the store at 255-2430 or online at www.fromagination.com. Fromagination will ship orders of it.

For more information about Hook's Cheese, go to www.hookscheese.com.

For more photos of Hook's 20-year cheddar, go to go.madison.com/photos.

Pasta e fagioli is easy to make. This recipe scales down the work even more by recommending you use canned beans.

Pig out with 3 pork recipes from a Michelin-starred chef

With two restaurants and three Michelin stars, chef Ryan Ratino coaxes the most flavor out of one of his favorite ingredients: pork.

Can you think of anything more snackable than granola? Whether it includes a variety of nuts, dried fruits or even chocolate – granola is addi…

The dish is filling, affordable, easy to make and can be frozen and saved for a weeknight.

Fresh pork belly has long been adorned the world over. It’s finally becoming a staple in the U.S. for more than just bacon.

Serve these meatballs alone, with your favorite pasta or on a baguette with the tomato sauce spooned over them. This recipe can also be adapted to make meatloaf.

Shrimp & Grits never tasted so good with Food Network’s Lara Lyn Carter’s spin on the dish with a healthy dose of olive oil.

This recipe is low-effort and the end result is an elegant dinner you could be proud to serve any guest.

Banana bread pudding is a delectable new way to use up slightly ripened bananas and day-old bread.

Ken Monteleone, owner of Fromagination, prepares to slice a block of Hook's 20-year cheddar cheese to package for his customers at his shop on Capitol Square. Monteleone fielded calls for the cheese, made by Hook's Cheese Co. of Mineral Point, from all over the U.S. He even got calls from England, but the store doesn't ship abroad.

Ken Monteleone, owner of Fromagination, slices a block of Hook's 20-year cheddar cheese at his shop. At $209 a pound, every crumb counts. "It's like being a surgeon," Monteleone said.

Slices of Hook's 20-year cheddar cheese to be packaged up for customers at Fromagination. Because of the price, most customers ordered the cheese in quarter-pound portions. 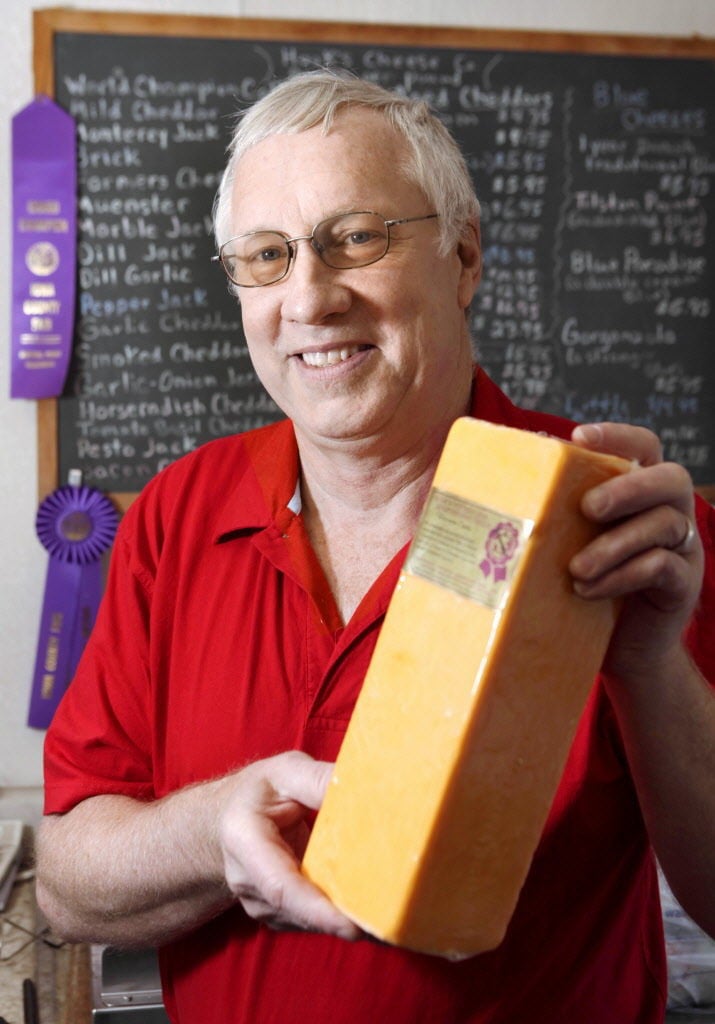 Tony Hook, shown in 2009, made news when he debuted a cheddar cheese that had aged for 15 years. The 20-year is expected to make an even bigger splash.