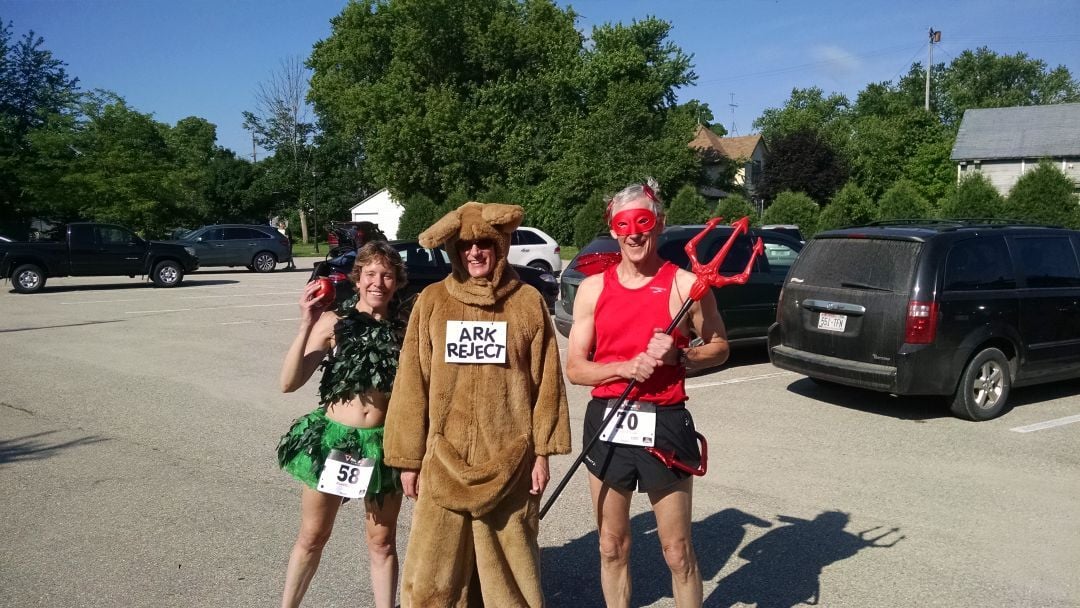 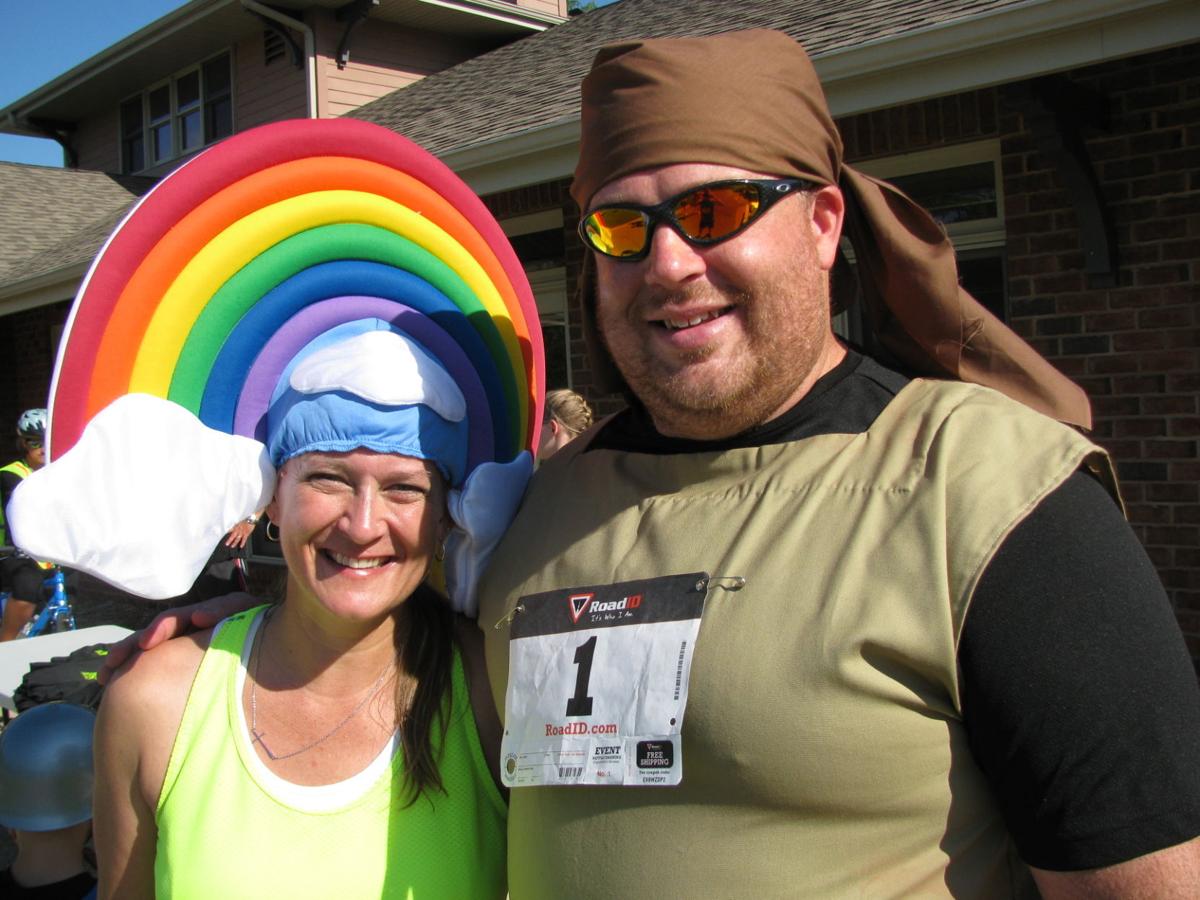 Diana Thomas is the race coordinator for the St. John's Lutheran Church 5K. The Rev. Matthew Smith-Laubenstein, dressed as John the Baptist, is the church's pastor.

The concept was irresistible to a religion reporter: a 5K race sponsored by a church where runners are encouraged to dress as their favorite Bible characters.

The race, sponsored by St. John’s Lutheran Church in Johnson Creek, unfolded last Sunday at the Johnson Creek Community Center, about 35 miles east of Madison. The idea originated at a church brainstorming session four years ago.

“We wanted to be more focused on outreach as a congregation,” said the Rev. Matthew Smith-Laubenstein, the church’s pastor. “We wanted to think outside the box and leave the sanctuary in order to bring worship out into the community.”

The event is billed as an opportunity to “run, walk and worship.” An outdoor church service in a park followed the race.

This was the third annual race, but the first year for the dressing-up part. I drafted two running friends, and the three of us headed to Johnson Creek with our costumes.

Ann Heaslett, a Madison physician and longtime ultra-runner, had spent several hours the previous evening pinning plastic leaves to her jogging bra and to a tutu she’d purchased at a party store. A snake made of fabric coiled around her shoulder, and a juicy red apple rested in her palm. A modern-day Eve had emerged, one with powerful hamstrings.

My other friend did not want his name used, fearing a possible public backlash over his costume choice. He dressed as the devil, which some might say was not in the spirit of the “favorite” Bible character theme.

Brandishing a pitchfork, he reasoned that he would inspire other participants to run faster if they felt the weight of Lucifer bearing down on them. He registered for the race as Lewis “Lou” Siffer. Horns sprouted from his head.

Pressed for time, I dug out an old kangaroo costume from storage (long story) and wore that, with an “Ark reject” sign around my neck. (My supervisor would like me to stress at this point that appearing in public as a marsupial was entirely my idea, born of free will, and not a condition of continued employment.)

Upon arriving, we quickly realized that the costume part of the race had not yet sparked the creative imagination of Johnson Creek. Only a handful of us had dressed up.

The pastor walked the course as John the Baptist. Race director Diana Thomas wore a rainbow on her head to represent the one Noah saw after the flood. There was an angel, and a Roman guard.

Participants numbered just 40, down from more than 100 runners last year, a decline organizers blamed partially on competition from Father’s Day events. Still, it was a great race, with a well-marked course, ample water stops and enthusiastic volunteers at every turn.

Full disclosure — after parading around in my kangaroo costume prior to the start and nearly collapsing due to the day’s heat, I shed the furry body suit and ran only with the floppy ears.

The Book of Ecclesiastes claims the race is not to the swift. This one was. Zach Schramm of Sheboygan won with a time of 19 minutes, 46 seconds. My friend Ann topped the female division in 23:09.

Ann also won the costume contest. She donated the $100 prize to the race’s chosen charity, Rainbow Hospice, a nonprofit organization based in Jefferson County that provides end-of-life care to the terminally ill and their families.

Despite the race’s small size, organizers raised more than $5,000 through business sponsorships, entry fees and other donations. After expenses, Thomas expects to donate $4,500 or so to Rainbow Hospice.

In addition to the 5K race, 10 kids competed in a one-mile run. About 75 people attended the worship service, co-sponsored by Trinity Lutheran Church of Lake Mills.

“Honestly, it’s just pure joy the day of the race, seeing everyone coming together and running and worshiping,” Thomas said.

In the Spirit: Checking back in with Madison's 'atheist church'

The effort has found stability and is attracting 30-50 people to its monthly services.

Some find the Rev. John Zuhlsdorf's idea brilliant, others mean-spirited.

Diana Thomas is the race coordinator for the St. John's Lutheran Church 5K. The Rev. Matthew Smith-Laubenstein, dressed as John the Baptist, is the church's pastor.