They were missionaries from The Church of Jesus Christ of Latter-day Saints, commonly known as Mormons.

Scheel, who invited them in, had drifted from Catholicism and was studying the Bible for answers. She recalls being impressed by the Mormon practice of tithing, or giving 10 percent of one's income to one's church.

"That's what the Bible says to do," said Scheel, 33, a stay-at-home mother of three in Middleton. "Example after example, the Mormon doctrine really follows what's in the Scriptures."

The four Mormon churches in the city have a combined membership of 1,748, which includes children. Many local members seem invigorated by the attention and eager to dispel misconceptions about their faith.

"It's remarkable the kinds of absurd questions you get asked," said Andrew Maxfield, 31, a UW-Madison graduate student.

He developed a good-humored campus seminar in response to the increased curiosity, dubbing it "Mormonism 101: What the Heck?" The title refers to the Mormon aversion to swearing. About 35 people attended the event earlier this month.

The female caller wanted an answer: "Are you Christians?"

The woman, prompted by things she'd heard critics say about Romney, had phoned the LDS Institute of Religion, 1711 University Ave. The small building, Madison's first Mormon church in 1954, is used now for church classes and as a chapel for the UW-Madison congregation. Reg Christensen, the institute's director, took the call.

"We're not Protestant or Catholic, but we are Christians," he told the woman. "Jesus Christ has always been the central focus of our worship."

Church members believe Vermont-born Joseph Smith, the denomination's founder and first prophet, received an ancient record, engraved on gold plates, from an angel. The plates gave the history of a people who lived on the American continent during the time of Christ.

Mormons also believe God continues to give direction through prophets, and that the church's current president, Thomas S. Monson, is a prophet who has the authority to speak and act in God's name.

"We believe in continuing revelation," Christensen said. "Some people find that hard to believe, but why wouldn't God care as much about us today as he did in the Old Testament days?"

Mormons say they get the "Christian question" a lot, but it certainly isn't the only one.

"We still get a lot of people asking about polygamy," said Vanessa Vernon, 22, a Utah native serving as a Mormon missionary in Madison. "I try not to be defensive and just clearly state that that's not us."

The church officially discontinued polygamy in 1890 — 122 years ago. Those who practice it today "have nothing whatsoever to do with the church," according to the church.

The 26,400-square-foot Mormon church at 701 Bear Claw Way, off Old Sauk Road on Madison's Far West Side, is the denomination's largest and newest in the city, completed in 2002.

The decision to build it was made in Salt Lake City, the church's headquarters, said Scott Rankin, chairman of the food science department at UW-Madison and the bishop of one of the two Mormon congregations that meets in the building. A bishop is the equivalent of the congregational president.

Most local members don't know what the church cost, and there is no mortgage, Rankin said. That's because all money contributed by U.S. church members goes to headquarters, which then redistributes it.

The Bear Claw Way church is a clear sign of the denomination's local growth. Membership in the church region that stretches from Madison to Prairie du Chien — called a stake — has increased 8 percent in five years. 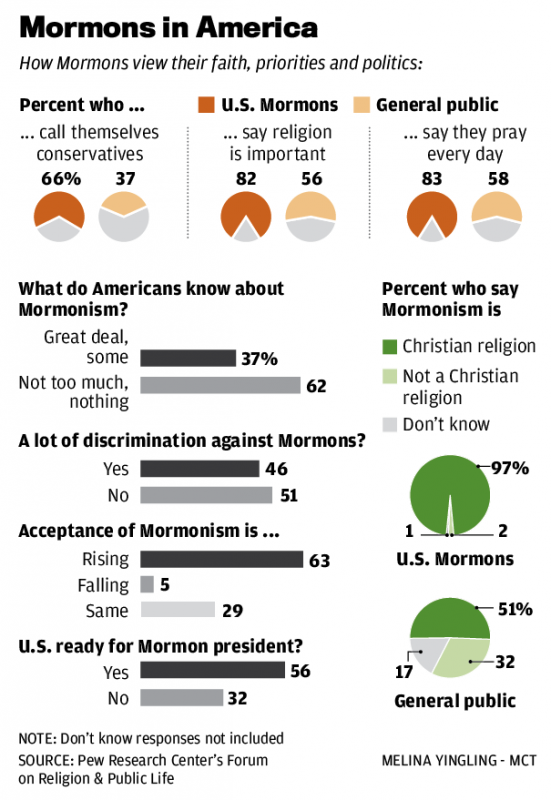 In the Madison area, members say a contributing factor has been the rapid growth of Epic Systems, the Verona employer that creates software for the health care industry. The company recruits at Brigham Young University in Provo, Utah, sponsored by the church.

An Epic spokeswoman said BYU is one of "dozens and dozens" of universities where the company recruits top computer science graduates and that there is nothing unique about the relationship.

The Mormon presence in Wisconsin remains small at 24,386 members, about 0.4 percent of the state population. Utah is 68 percent Mormon. The church has 6.1 million U.S. members.

Latter-day Saints have no professional clergy and little, if any, paid staff. Lay people do all of the preaching and most other church work. "This isn't just a Sunday activity," said Ken Nelson of Sun Prairie, stake president. "It's your life."

The majority of Mormon men are priests, a title conferred upon faithful male members. It accords them the authority to act in the name of God, allowing them to perform baptisms and to lay hands upon the heads of others and bless them with physical healing and spiritual strength.

Only men can be priests, but the church says women can lead as counselors, missionaries and teachers. They can speak from the pulpit on Sundays and offer prayers.

The church's proclamation on family life says parents "are equal partners," with fathers providing "the necessities of life" and mothers being "primarily responsible for the nurture of their children."

The labor division is controversial outside the church, but members see it differently.

"The roles are different, but one isn't better than the other," said Carol Christensen, 61, a local real estate agent. "I have never felt slighted or left out."

"The church counsels us to stay home and raise our children, but taking care of the family is for a limited time," she said. "I think the church encourages us to be strong, to be educated, to take care of ourselves if needed."

Andrew Maxfield, 31, a UW-Madison graduate student, developed a presentation for fellow students called "Mormonism 101: What the Heck?" He agreed to answer a few questions:

A: The word "caffeine" never appears in "The Word of Wisdom," the Mormon health code. Coffee and tea are prohibited explicitly, and it is by inference that people assume that caffeinated soft drinks are off-limits.

Q: Lots of Mormons in their 20s seem to be married with children. Coincidence?

A: Nope. While there's no official policy that tells Mormons when to get married, Mormons place special emphasis on family life since they believe family relationships can be restored after death. Family-centeredness is a matter of fundamental theology for us. So, Mormons tend to marry, sometimes marry young-ish, and usually have kids, if possible.

Q: In February, a New York Times columnist apologized after posting a negative comment on Twitter about Mitt Romney's "magic underwear." What was that about?

A: Practicing Mormons who have gone to a Temple to make a promise to keep God's commandments thereafter wear underclothing — white shirt and shorts called simply "garments" — as a constant personal reminder of that promise. Calling garments "magic" is silly, misleading and usually mean-spirited. There's nothing magic about it. However, Mormons do believe that keeping their promise to obey God's commandments yields blessings and protection. But that's an idea as old as the Bible — and so is the idea of wearing clothing with religious significance.

For the young men and women who spend their days spreading Mormonism, the presidential campaign offers an easy ice-breaker.