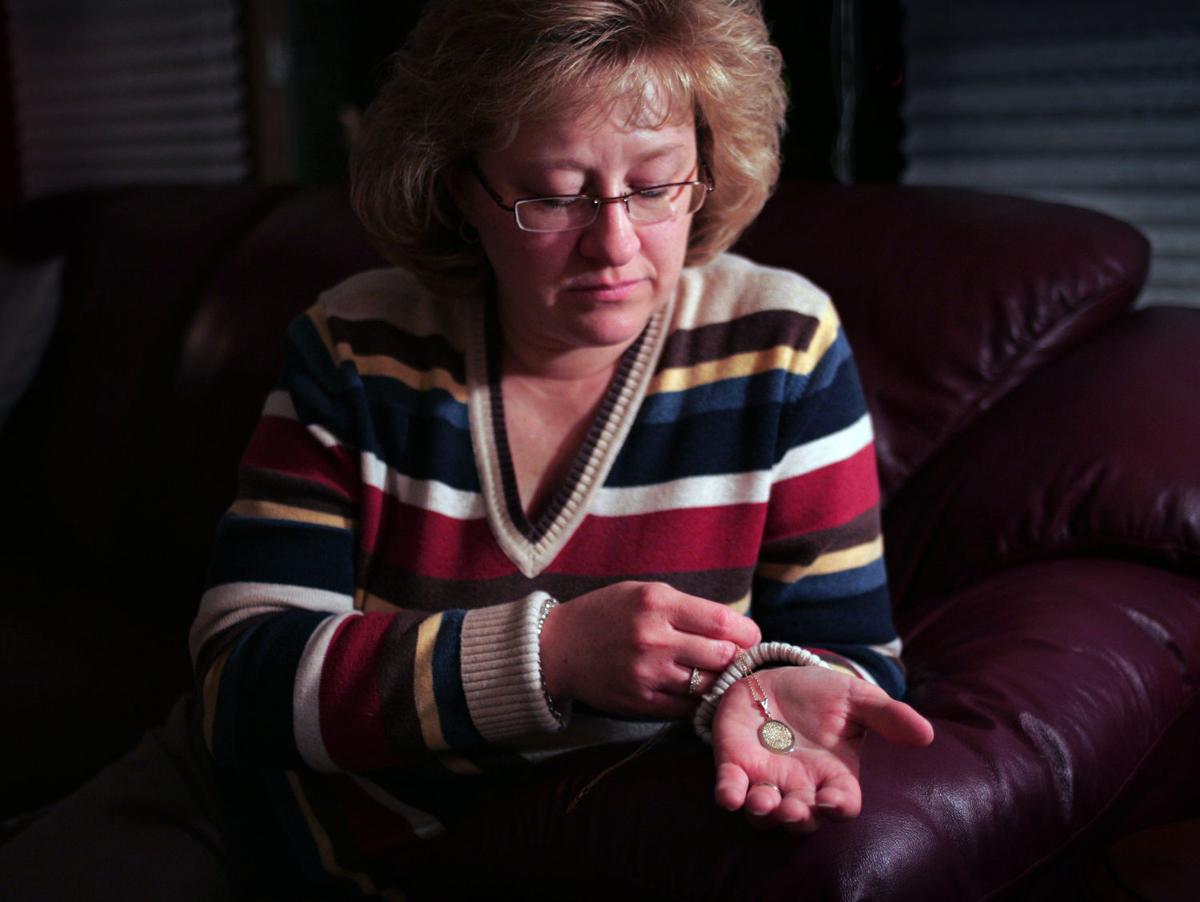 Jean Zimmermann, mother of slain UW-Madison student Brittany Zimmermann, holds a necklace she wears that has an impression of her daughter's thumbprint. 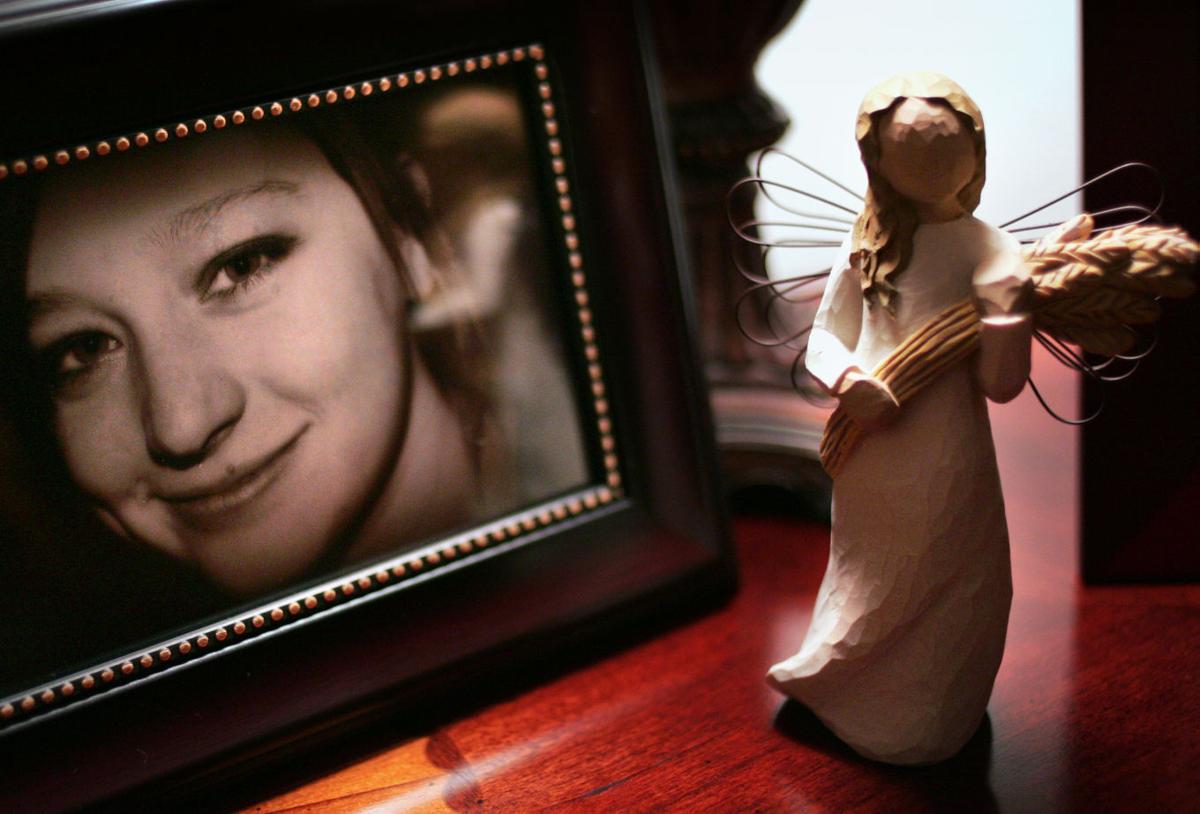 Brittany Zimmermann's smiling face is framed beside a wooden angel in the Marshfield home of her aunt, Kim Heeg. The UW-Madison junior who planned to become a physician was slain in her Downtown apartment on April 2, 2008. 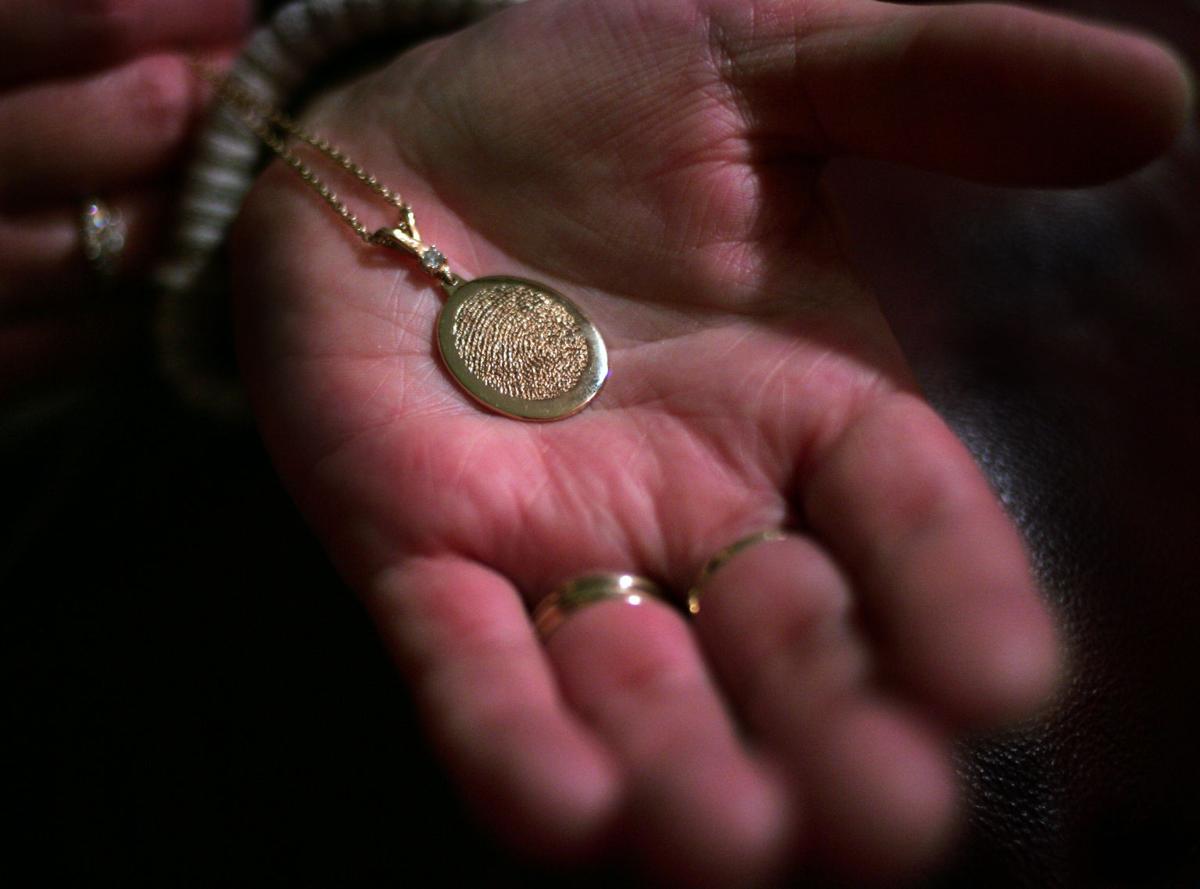 Jean Zimmermann, mother of Brittany Zimmermann, holds a necklace she wears with an oval medal bearing an impression of Brittany's thumbprint in Marshfield on Oct. 8, 2008.

MARSHFIELD -- Brilliant flashes of autumn leaves light up the landscape and attest to the change of seasons in this central Wisconsin city. But for Jean Zimmermann and her family, time stands still.

More than six months have passed since her 21-year-old daughter was killed in her Downtown apartment after walking home from a morning exam at UW-Madison. Police have yet to find her killer.

"Until we have justice for Brittany, there is absolutely no healing that can start," said Zimmermann, who spoke with the State Journal last week. It was first time she's talked publicly about her daughter's death.

She said she decided to speak out now in an effort to draw more attention to a reward fund she hopes will help police solve the case.

Jean Zimmermann said her pain burns even hotter because she still doesn't know how her daughter died. She can't believe no one on the busy streets around her daughter's apartment saw the killer. She can't understand why no witnesses have come forward.

Her grief was deepened by revelations about mistakes made by the Dane County 911 center in handling a call from her daughter's phone. Jean Zimmermann also is haunted by the last phone call she got from Brittany on the day that she died.

She and her daughter were very close, sometimes talking on the phone three or four times a day.

"She was truly my life," Zimmermann said. "It almost feels like it's still a nightmare. You relive it every single day."

Little is released Every day, Zimmermann logs on to the Internet to read the incident reports posted by Madison police and the crime stories on Web sites of Madison newspapers and television stations.

Then she e-mails the detectives working on her daughter's case to ask if they've collected potential evidence from anyone arrested. "I say, 'Do you have that DNA?'"

But Zimmermann doesn't know if police have DNA of her daughter's killer to compare with possible suspects.

Madison police won't say what kind of evidence they took from the West Doty Street apartment where Brittany died around midday on April 2. Investigators have released little information - even to Jean Zimmermann - because they worry that publicity could harm the investigation.

That has left the Zimmermann family balancing their frustration and the faith they say they have put in the police.

"We have no answers," Jean Zimmermann said. "I don't even know what happened to her."

Jean Zimmermann's family, including her sister, Kim Heeg, and her mother, Jeannette Andres, also of Marshfield, say they'll do whatever they can to help catch the killer.

"If it takes money, we're going to try to raise the money," Zimmermann said.

Last month they were provided with $5,000 from a group that helps financially strained families of crime victims set up reward funds. Contributions from relatives and friends have boosted the fund to more than $10,000. The Zimmermanns hope to add $5,000 by Nov. 15, which would have been Brittany's 22nd birthday.

Heeg recently launched her own e-mail campaign to raise an additional $2,200, through 100 donations of $22.

Sitting with her sister and mother in Heeg's living room, Zimmermann remembers the day in 2007 when she and other family members helped Brittany and her fiance, UW-Madison student Jordan Gonnering, clean and paint the apartment they shared at 517 W. Doty St.

It was a weekday, Zimmermann said, adding, "There were so many people around."

On the day Brittany died, Gonnering found her body around 1 p.m. He called police, who quickly ruled him out as a suspect. Police said a door on the outside of the building had been forced open, and the coroner reported that she died from "a complexity of traumatic injuries." A source familiar with the investigation said she had been stabbed, but police have said little else.

"I don't understand it. I ask (detectives) all the time how can this possibly have happened and no one saw it?" Zimmermann said. "Why isn't anyone coming forward? Why isn't anyone willing to help us?"

"I don't want to put blame on anyone," Heeg said. "It just feels like we've been so let down."

Madison Police Central District Capt. Mary Schauf said police believe that the killer was a stranger to Brittany, and detectives "have a working hypothesis" about what led to the murder.

Withholding information about the homicide enables police to sift through tips, prioritizing those in which informants provide accurate details about the crime that haven't been made public, Schauf said.

"The more information that gets out on a case, the harder it is" for detectives to get what they want when interviewing potential suspects, she added.

"We haven't dried up the leads or the places to look yet. The energy is still going with the case."

Members of the Zimmermann family contribute as much as they can.

"We hypothesize every day," said Jean Zimmermann, who calls detectives and asks, "What about this scenario?" Invariably, they tell her they've already examined the theory she is offering.

"You are constantly thinking about it. It consumes your every thought, every second of every day," Zimmermann said. Until recently, she and her husband, Kevin, would not go to bed until 3 a.m. because their "minds were so busy."

"She was amazing, even as a child," Zimmermann said of their daughter, who worked hard to attend UW-Madison. She was a junior majoring in medical microbiology and immunology and had plans to become a physician.

"She truly was someone who wanted to help people," Zimmermann said. "She never disappointed us. She never got in trouble. She never was a risk taker. ... Kevin and I said, 'How did we get her?'"

Jean Zimmermann said detectives have told her how they will deliver the news of an arrest: If she and her husband are at work, detectives will call and tell them to go home, so they can both be on a phone at the same time to be told what's happened.

Zimmermann said that when she learns how her daughter was killed, it will be as if she's died all over again. "It's finally going to seem like it's actually real," she said.

The case has attracted intense attention in Madison and to some extent nationally, in part because it appeared to be one of a series of random killings. It captured additional interest after it became known that a 911 call from Brittany Zimmermann's cell phone was made at about the time she was killed. An emergency operator mishandled the call, and officials later gave detectives incorrect information about it. The problems set off a public controversy about staffing and management at the county 911 center. The preliminary findings of an audit of the center's staffing and practices are due out this week.

The revelations added another layer of grief. "She did everything right, and nobody helped," Jean Zimmermann said.

Another call Jean Zimmermann is haunted by another phone call from her daughter.

"The day she died, I missed a call that she made to me on the way home from school," Zimmermann said.

After Brittany got out of class that morning, she returned a phone call from her fiance's sister, leaving her a short, cheery message. At 11:57 a.m. - about the time Zimmermann believes her daughter would have been getting home - a call from Brittany's phone came in on her mother's work phone at Marshfield Clinic.

Jean Zimmermann was away from her desk. Her phone wasn't equipped with voice-mail, but the caller ID caught Brittany's number.

Zimmermann had planned to call her daughter back at 3 p.m., after work. When she arrived home, there was a police car in her driveway and officers were waiting inside with her husband. He told her, "'Something happened to Brittany. Somebody murdered her.'"

Zimmermann said she and her husband seldom go out, because people want to talk to them about Brittany. "I get teary," she said. "I have to leave. I can't deal with it."

"We can hardly be in Madison anymore," said Heeg, a social worker who went to UW-Madison for her master's degree. They no longer feel secure, even in Marshfield.

As palpable as their anguish is, when Zimmermann, Heeg and Andres talk about Brittany's life, they are aglow with a joy that mirrors Brittany's face smiling from a picture frame on a living room table. They share memories of how she was always thinking about what she could do for her family, how she wanted all of them to come to Hawaii where she planned to be married next year on the beach in bare feet, how she loved her three cats like they were her children and how much she loved ham. It's almost like Brittany is still with them.

Gold charm Around her neck, Jean Zimmermann wears a gold charm with an impression of Brittany's thumbprint made after her death. On the back is an image of a butterfly and the word "kisses" - a reference to the song "Butterfly Kisses," which Brittany had chosen for her wedding dance with her father.

On Zimmermann's wrist is a bracelet with Brittany's name, sent to her by Anne and Tim Olson of Oregon, the mother and stepfather of 25-year-old homicide victim Angela Drake, who died in 2005.

And on Zimmermann's finger is a diamond ring from her husband that Brittany designed.

Before Brittany's body was cremated, Zimmermann said, Gonnering slipped a diamond engagement ring onto one of her fingers. It was a ring they had picked out, but not purchased, before her death.

"I think about him all the time, finding her, how horrible the memories must be," Zimmermann said. "It's very hard for him."

Brittany's parents have not taken the urn containing her ashes to the cemetery.

"My husband and I don't want her there by herself," Zimmermann said. When Jean or Kevin Zimmermann dies, the survivor will bury the deceased spouse together with Brittany's remains.

"Until then, she's home," Zimmermann said. "We feel comfort with her being there."

Jean Zimmermann, mother of slain UW-Madison student Brittany Zimmermann, holds a necklace she wears that has an impression of her daughter's thumbprint.

Brittany Zimmermann's smiling face is framed beside a wooden angel in the Marshfield home of her aunt, Kim Heeg. The UW-Madison junior who planned to become a physician was slain in her Downtown apartment on April 2, 2008.

Jean Zimmermann, mother of Brittany Zimmermann, holds a necklace she wears with an oval medal bearing an impression of Brittany's thumbprint in Marshfield on Oct. 8, 2008.