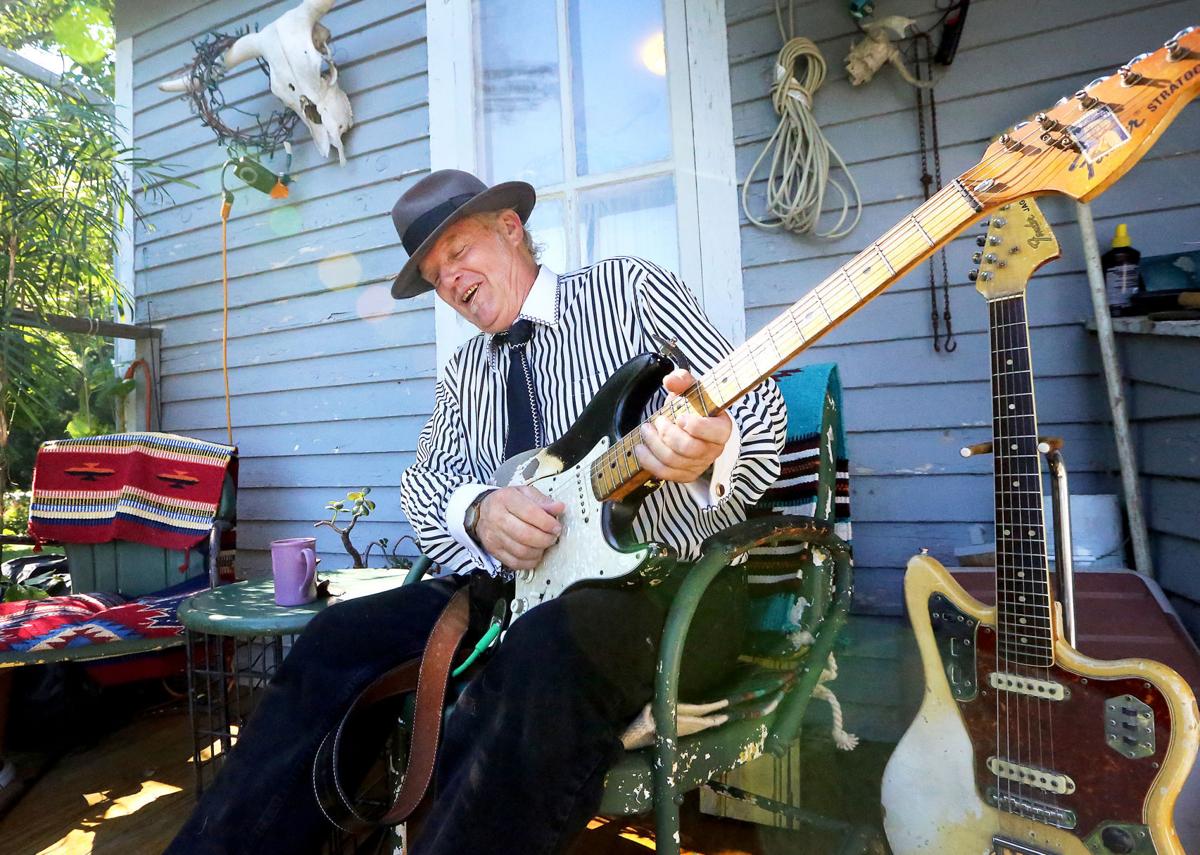 Paul Filipowicz, 66, has been playing blues music for over 40 years, including on his front porch in the town of Aztalan east of Lake Mills. Filipowicz was inducted last fall into the Chicago Blues Hall of Fame. 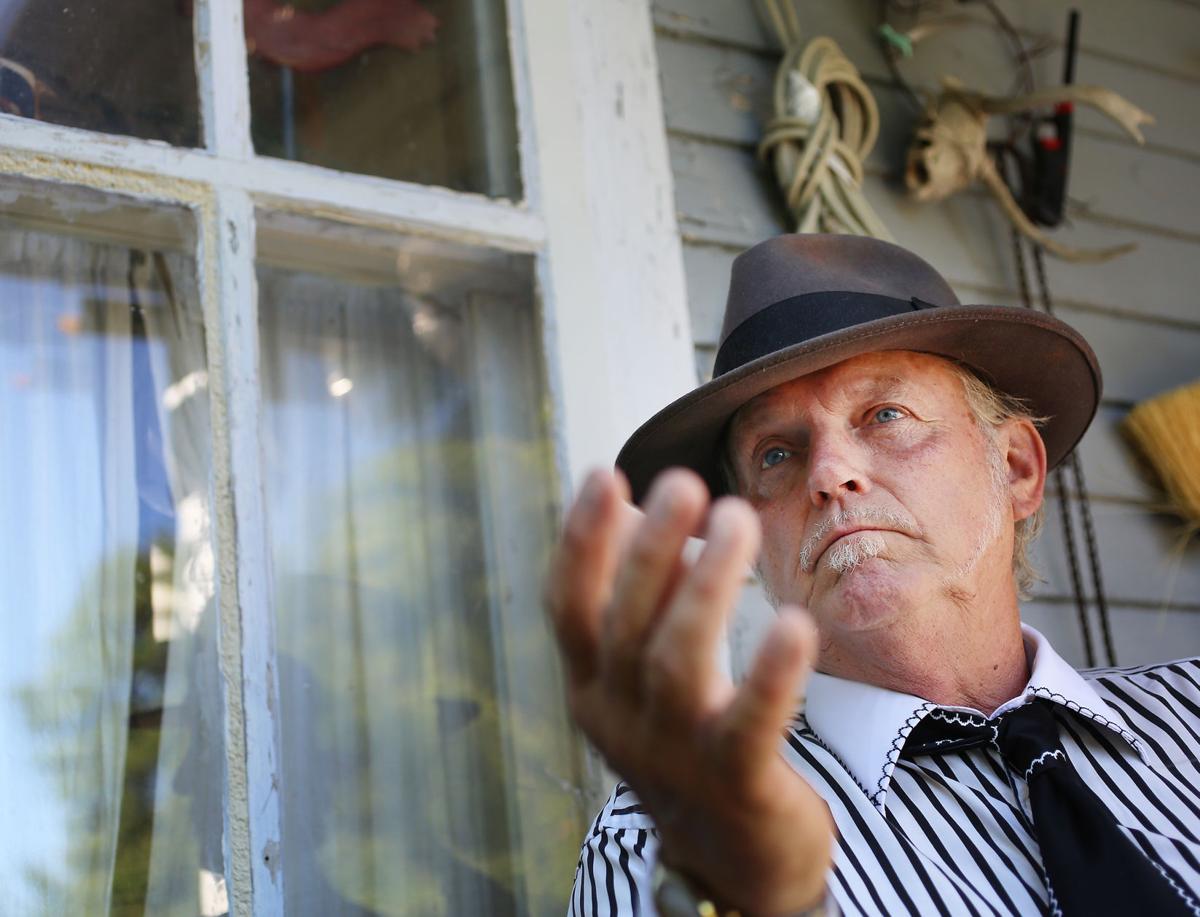 TOWN OF AZTALAN — Paul Filipowicz has little mercy for his audience.

Whether it’s at the Badger Bowl in Madison, an American Legion beer tent in Lake Mills or Buddy Guy’s Legends in Chicago, the blues guitarist, who makes his home just east of the Crawfish River in Jefferson County, goes into each show hoping to knock his fans off their feet and leave them gasping for air.

If they’re still standing at what should have been the end of the set list, it’s a signal to Filipowicz to crank out another hard-driving tune on one of his worn Fender guitars.

But there is a softer side to the 66-year-old Chicago native who has lived in Wisconsin for the past 50 years and who was inducted into the Chicago Blues Hall of Fame last fall. Filipowicz takes a few moments during each show to remember those who have influenced his music, a genre he discovered when he was 14 years old standing outside a club on the Windy City’s south side.

“I don’t take myself seriously but I take the music seriously,” Filipowicz said last week while seated on the front porch of his 1908 farmhouse. “I feel that the old guys had a hand in getting me into the Chicago Blues Hall of Fame... and when I say their names they’re in the room once again. So I try to do that.”

Filipowicz is among the headliners at Atwood Fest on Sunday and will hit the Alchemy Cafe Stage at the corner of Atwood Avenue and Winnebago Streets at 2:15 p.m. He will follow the Katie Scullin Band that plays at 12:15 and precedes The Family Business, a rock band out of Monroe (4 p.m.) and Jane Lee Hooker (5:45 p.m.), a female blues band from New York that has been influenced by many of the same artists that have left their mark on Filipowicz.

Paul Filipowicz rips it up and educates others about the blues

Christine Johnson, president of the Madison Blues Society, will introduce Filipowicz and has seen the guitarist on several occasions, most recently July 22 at the Knuckle Down Saloon, 2513 Seiferth Road, a prime destination for all things blues. The club, opened by Chris Kalmbach in 2010, is where just over a year ago Filipowicz recorded his latest live album “Roughneck Blues” for Big Jake Records.

“He’s just real high energy and just gives it his all at every performance,” said Johnson, who has been with MBS for four years. “He’s just one of those guys that from the first note to the last note he just puts it all out there. He has lots of respect for the music and brings his own technique and voice to the blues genre.”

He’s been playing the blues for more than 40 years but at the same time has worked full-time in construction and roofing to pay the bills. Bad knees and elbows forced him to retire from the work this year but he’s still building a cabin near Tomahawk using timber harvested from his 70-acre property.

When he’s back home and not playing his guitars, he likely has a wrench in hand. He’s restoring a 1949 Ford pick-up truck with duel carburetors on a flat-head eight-cylinder engine and a 1948 Ford Super Deluxe four-door car with suicide doors — where the hinges are at the rear of the door. There’s also a 1965 Mercury Comet and a 1950 Ford pickup in the yard. He uses a 2002 Toyota Sienna mini-van with more than 140,000 miles on the odometer to haul his gear to shows around the Midwest. It included shows Friday and Saturday at Riverfront Mary’s in Sturgeon Bay.

“I’ve been wrenching all my life,” Filipowicz said, as he showed off his vehicles and a garage packed with tools, engines and other parts. “I’m a Ford guy.”

His construction and car work stand in contrast to his stage presence where he wears suits from Mitchell Street Men’s Wear in Milwaukee, cuff links, Stacy Adams shoes in red, black, white or blue, and a fedora. In 2013, he was named best-dressed male by Big City Rhythm & Blues magazine and has Madison Area Music Awards for best blues album in 2005 and best blues song in 2006.

He learned to wrench from his father who worked full time making sausage for Armour & Co. in Chicago but on the weekends worked on cars. When Filipowicz was a sophomore in high school, his father took a job at Jones Dairy Farm in Fort Atkinson and moved the family to Wisconsin.

His father also played the harmonica and trumpet, his mother taught piano, his two sisters played piano and they all sang in church. Filipowicz gravitated to the guitar when he was about 7 years old. After graduating from Fort Atkinson High School in 1968, he attended UW-Whitewater for five semesters before getting into construction work and moving to Denver. He returned to Wisconsin in 1974 and formed a band. His first paid gig was in 1971 when Filipowicz played harmonica at the Mint Lounge at Humboldt and North avenues in Milwaukee.

He doesn’t read music, learned by ear and plays his guitars without a pick.

“I knew it was the way to feel the guitar. It gives you a different tone,” Filipowicz said. “Music is a feeling and I try and transfer the feeling that I felt. When I’d go and see Otis Rush or Fenton Robinson or Jimmy Dawkins, I wouldn’t sit there and look at their hands. I would just close my eyes and go with them. It would just elevate you to the moon.”

Filipowicz has played with Ken Saydek and Mighty Joe Young and opened for Hound-Dog Taylor several times when he came to Madison for shows at the Church Key. He was influenced by and friends with Luther Allison, who died in 1997 in Madison, and was a regular at Luther’s Blues, a club on University Avenue near the UW-Madison campus from 2000 to 2005. He counts drummer Clyde Stubblefield as a mentor and friend.

“As long as Clyde Stubblefield is still around the world’s a better place, I’ll tell you that,” Filipowicz said. “He’s one of the greatest human beings I’ve ever met and he influenced my music tremendously by being in my band and being my friend.”

Filipowicz has lived east of Lake Mills about a mile from Aztalan State Park and near the Aztalan Cycle Club motocross track for nearly 30 years with his wife of 34 years, Katherine Herro. They share space with Spike, a 7-year-old white shepherd, and Bammer, a 17-year-old black and white tuxedo cat. They also have three adult sons.

Filipowicz has nine albums under his belt and scores of original songs. His albums have cracked the top 10 on the Living Blues magazine charts while his “Chickenwire” album, released in 2007, was in the top 100 of Real Blues magazine in Canada for 32 months.

Filipowicz grew up in a time when the Beatles, Rolling Stones, Jimi Hendrix and other legendary rockers were getting their start but their popularity never had sway.

Watch Paul Filipowicz play the blues and talk about his music career in a video at www.madison.com.

Old City Cemetery, established in 1838, had its last burial in 1908 and is Mineral Point's oldest cemetery.

Celebrating 50 years of Lake Redstone and its community

A celebration this week will mark 50 years since Sauk County farmland was flooded to create a more than 600-acre lake rimmed with homes.

On Wisconsin: Janesville begins to reveal its past for the future

A flood of development in the city's downtown is designed to draw more residents, businesses and workers.

New Glarus Brewing Co. is working on a plan to build a distillery. Production would likely begin next year.

In Fort Atkinson, a downtown revival rides on the back of a historic building

Cloudy water has limited visibility for the sturgeon spearing season but some still find success.

The shop, owned by the longtime Madison area chef, is only open on weekends but includes a growing on-line business.

Paul Filipowicz, 66, has been playing blues music for over 40 years, including on his front porch in the town of Aztalan east of Lake Mills. Filipowicz was inducted last fall into the Chicago Blues Hall of Fame. 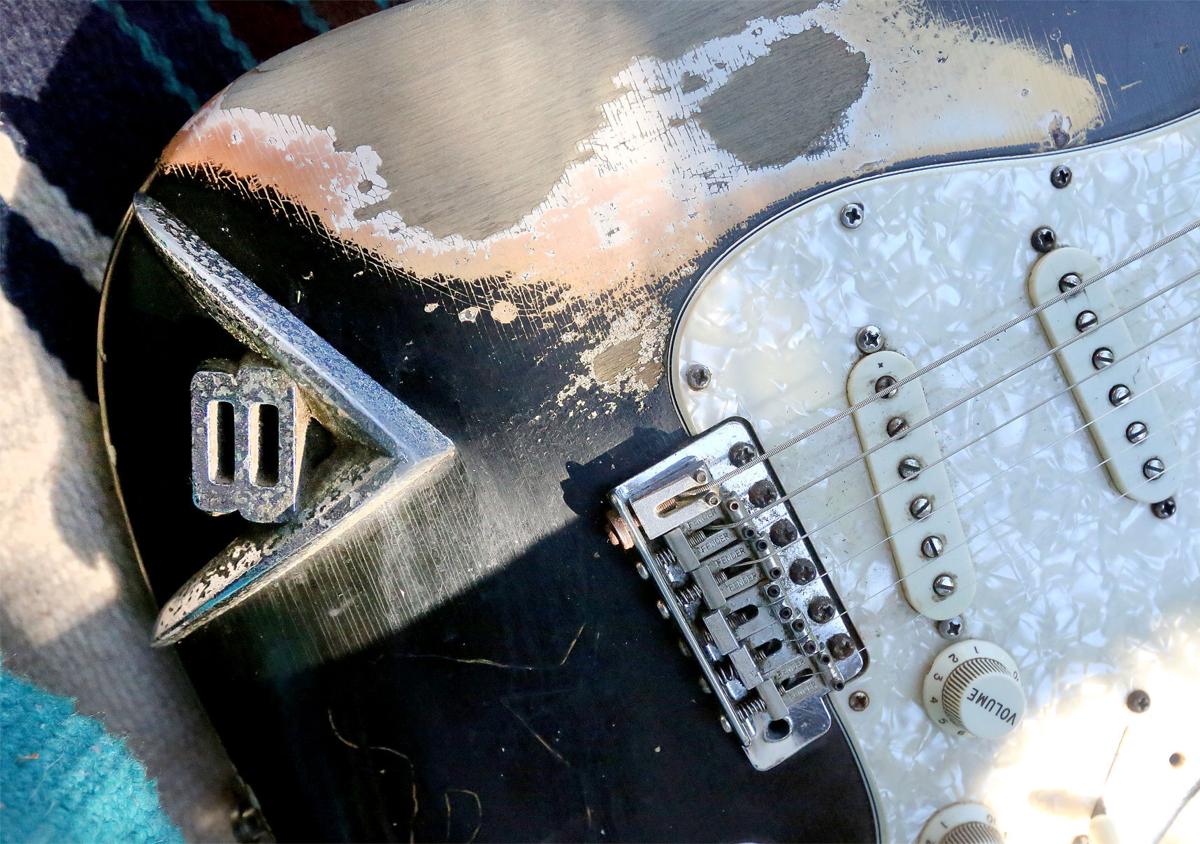 A 43-year-old Fender guitar belonging to blues musician Paul Filipowicz shows off the years of use. Filipowicz doesn't use a pick when playing and can't read music but is one of Wisconsin's most accomplished and respected blues musicians. 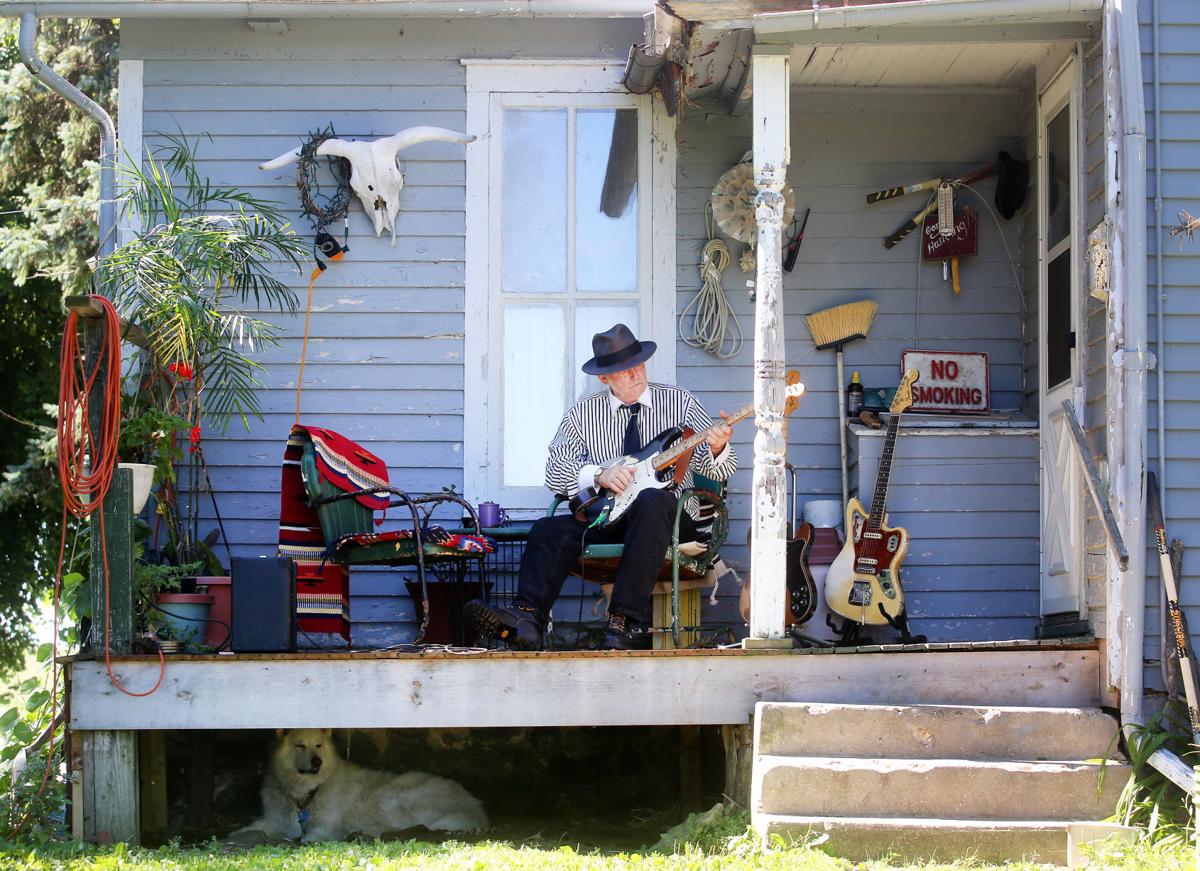 Spike, a 7-year-old white shepherd, has a cool spot under the porch as Paul Filipowicz plays his electric Fender guitar. 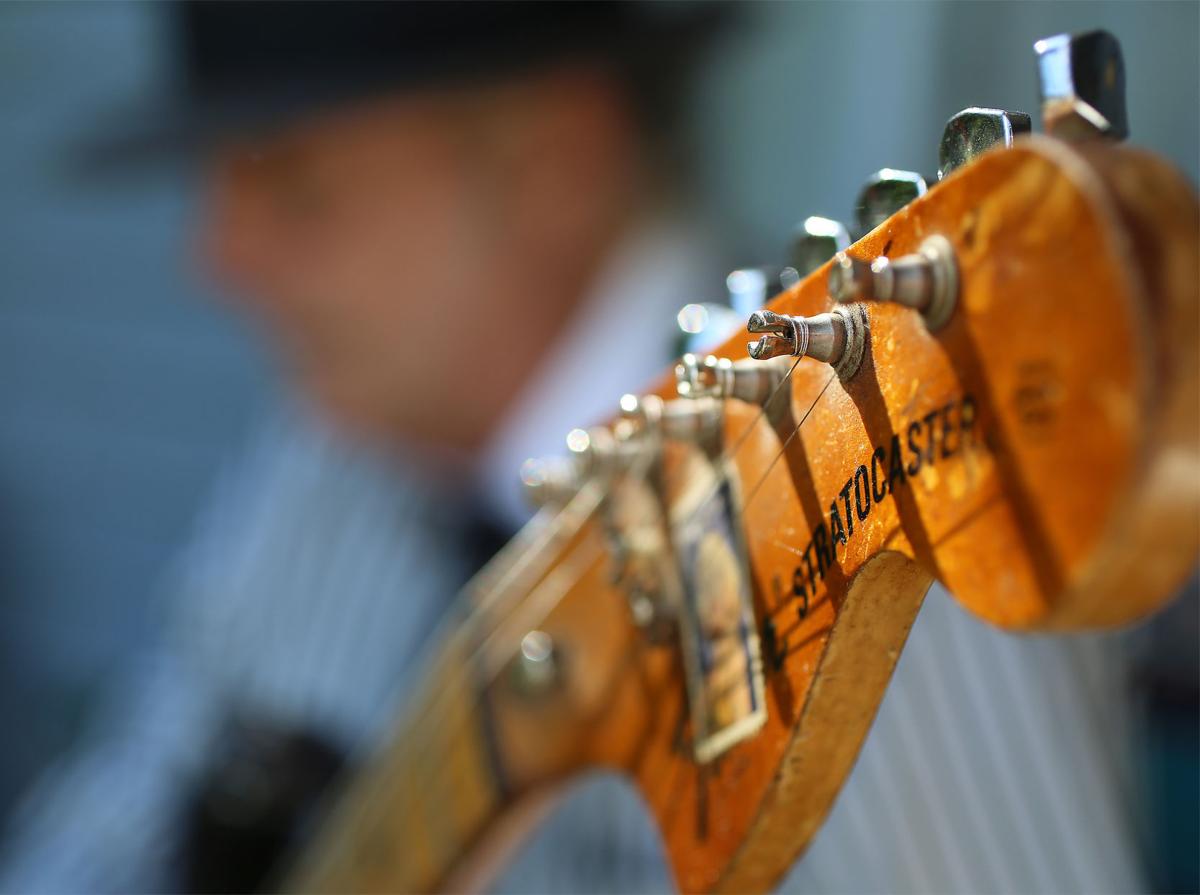 The head of a 1973 Fender Stratocaster shows years of wear from blues musician Paul Filipowicz. 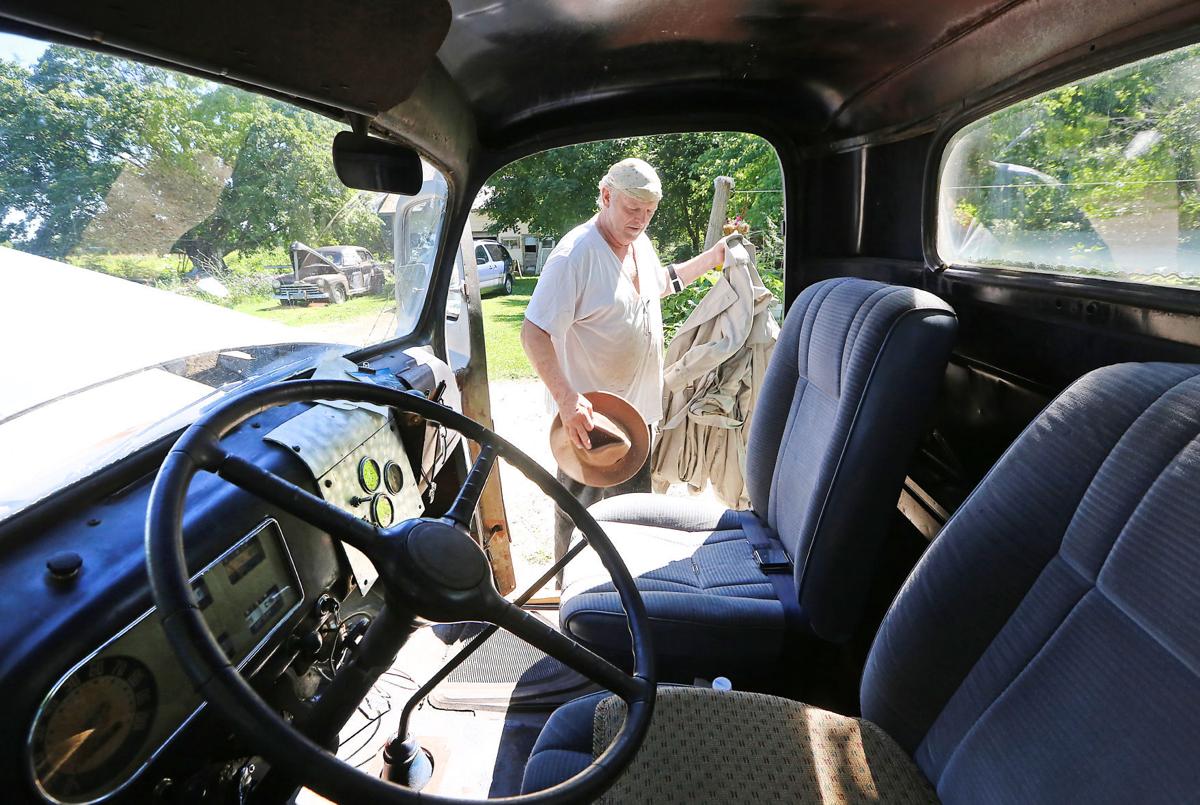 Having learned to 'wrench' from his father, blues musician Paul Filipowicz has an avocation for antique car restoration. Several vintage Fords share space outside the musician's home in the town Aztalan east of Lake Mills. Here, Filipowicz, prepares to drive his 1949 Ford pickup.