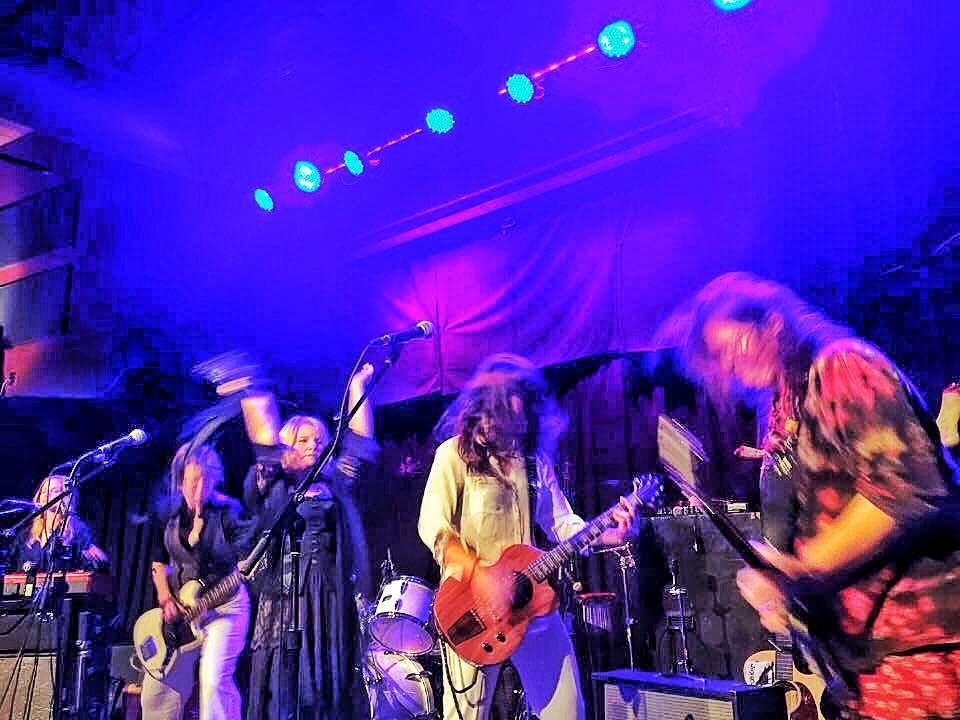 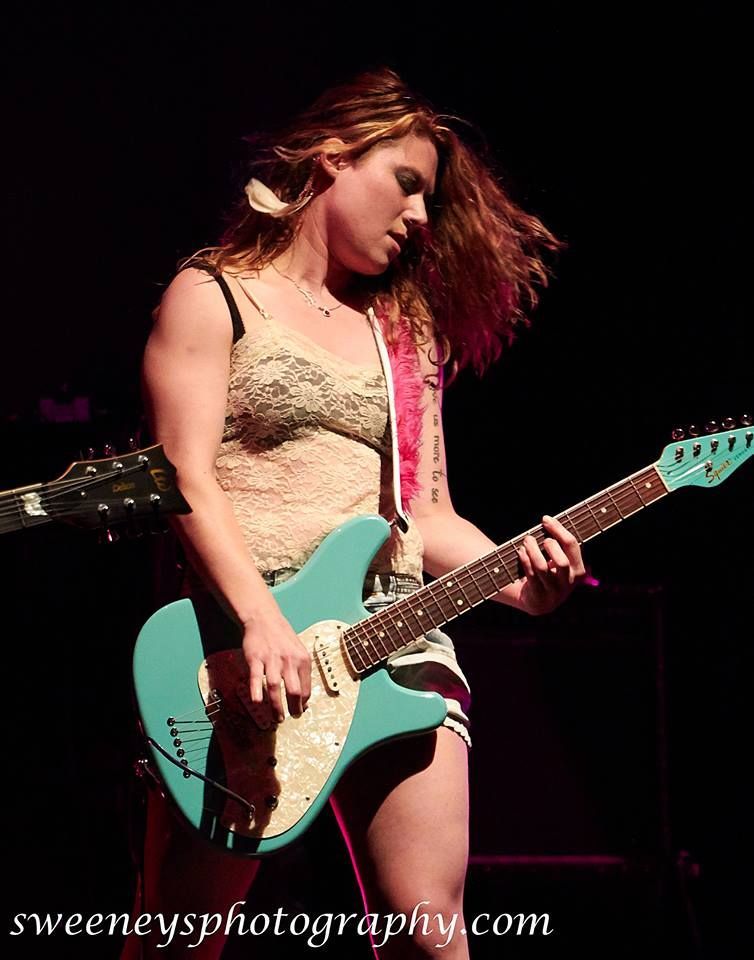 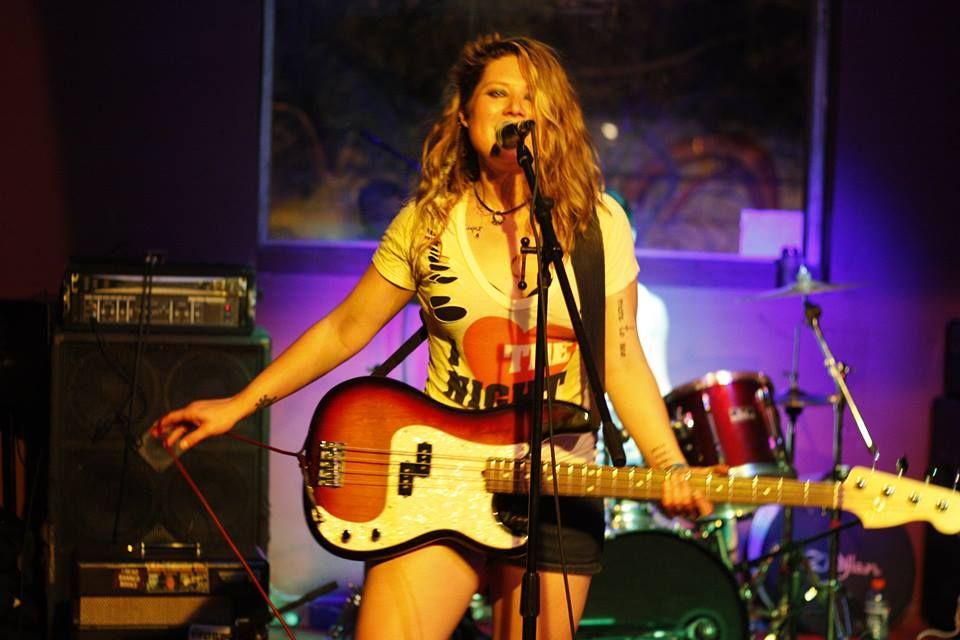 Meghan Rose during a Damsel Trash show at Red Line Tap in Chicago.

Local musician Meghan Rose won over crowds in 2012 by performing as Courtney Love in a Hole cover band. In 2013, she was the bassist in an Aerosmith tribute band. In 2014, she embodied Janis Joplin on stage.

The versatile singer and guitar player is now gaining acclaim for her new, five-member, all-female band, Gold Dust Women, which received an instant following when they played the music of Fleetwood Mac at the High Noon Saloon on Halloween. They even brought in a horn section near the end.

“You pull out all the stops you can to put on a good show,” said Rose, 29, who is bringing Gold Dust Women to the Crystal Corner Bar on Williamson Street for an encore show Saturday.

Her various cover projects have all been designed for an annual tribute band extravaganza at the High Noon started by the defunct website Dane101 called A Freakin’ Halloweekend. The event has continued even though Dane101 hasn’t.

“I don’t know where they got the idea originally,” said Gold Dust Women’s bass player Annelies Howell, 43, a math and physics teacher at Verona High School.

The day after their High Noon performance, Joe Lambert, the longtime in-house promoter for the Crystal Corner, contacted them and said, “You guys made quite the splash, do you want to do a tribute night at the Crystal?”

Lambert said he saw a video of their version of “Gold Dust Woman,” and it became obvious that these were musicians who had put a lot of time and effort into creating “a sincere tribute” to Fleetwood Mac.

Rose, who does the Lindsey Buckingham vocals for the band, said that after Saturday they hope to continue performing as Gold Dust Women.

Her main musical focus is on Meghan Rose and The Bones and her punk band Damsel Trash. She is also heavily involved in musical theater through OUT!Cast Theatre, Mercury Players Theatre and Broom Street Theater.

Each year for the tribute projects she thinks about the musicians she wants to work with, and what artist or band would be fun to become.

“And I’ve always wanted to do Fleetwood Mac, because I’ve loved them since I was in high school,” said Rose, who grew up in La Crescent, Minnesota, across the river from La Crosse.

She moved to Madison in 2004 to go to UW-Madison and for six years afterward worked at Epic Systems. She has focused entirely on music for the past year and a half, but recently started a consulting job.

All but one member of Gold Dust Women are instructors with her at Girls Rock Camp, a weeklong day camp for girls where Rose has taught the past two summers.

“It’s really important to me,” she said. “Just because it’s my favorite time and the camaraderie is great and the sense of purpose is so great.”

The instructors become a community inside and outside of camp, she said.

It wasn’t as if she’d set out to create an all-female band, but Rose said she liked that it turned out that way.

On Saturday, Gold Dust Women will headline a bill that also includes the Billy Joel tribute that performed the same night as they did at the High Noon, and the Rolling Stones knock-off band that played Halloweekend the night before.

Rose said she was nervous about headlining the sold-out Halloweekend show because they didn’t go on until 1 a.m., which is late, even on a raucous night like Halloween, she said, “but we had a fantastic crowd staying that late up until the end.”

Howell added that it’s always a challenge to go last, stay sober and be professional.

“We rehearsed a lot so we were ready. We played great.”

Rose’s four bandmates also include women she plays with or has played with in other bands.

Kelly Maxwell, who does the Stevie Nicks vocals, is in her band, Little Red Wolf, which has been inactive since one member moved away. Drummer Ginny Kincaid plays in Meghan Rose and The Bones.

The band plays 10 Fleetwood Mac songs in 40 minutes. The set will include many of the band’s “best of” numbers, songs most everyone knows: “Go Your Own Way,” “Don’t Stop,” “You Make Loving Fun,” “Dreams” and “The Chain.”

Fleetwood Mac endures because of its strong songs and solid songwriting, Rose said. Buckingham’s style of guitar-playing is unusual because he was originally a banjo player, so he plays entirely with his fingers instead of with a pick, she said.

“He does a lot of fast-picking … and his guitar riffs are just very unique because of how he plays. That makes it really memorable. And then there’s of course Stevie’s voice which everybody just loves,” Rose said.

CHICAGO (AP) — Illinois prosecutors said Wednesday that the first of four Chicago sexual abuse cases against R. Kelly that they'll take to trial involves a hairdresser who says the R&B singer forced himself on her during a 2003 appointment.

Ozzy Osbourne has gone public with his Parkinson's disease diagnosis. The 71-year-old musician said revealing his illness was like a weight being lifted.

Lady Gaga will reportedly kick off her next album with her first solo sining in four years on February 7.

MINNEAPOLIS (AP) — A wrongful death lawsuit filed by Prince's family members has been quietly dismissed in recent months, suggesting family members have reached settlements with defendants including the Minnesota doctor who saw Prince in the weeks before his death and the Illinois hospital that treated him for an opioid overdose seven days before he died.

CHICAGO (AP) — Illinois prosecutors said Wednesday that the first of four Chicago sexual abuse cases against R. Kelly that they'll take to trial involves a hairdresser who says the R&B singer forced himself on her during a 2003 appointment.

Here's a look at Meat Loaf through the years. He's best known for the 1977 record "Bat Out of Hell" and a role in the "The Rocky Horror Picture Show."

BOSTON (AP) — A judge has told Aerosmith's drummer Joey Kramer to dream on if he hopes to rejoin the band as it's set to perform and be honored at Grammy events this week.

Aerosmith have issued a statement after the band's drummer Joey Kramer filed a lawsuit against them for allegedly not allowing him to perform due to a "minor" injury.

Meghan Rose during a Damsel Trash show at Red Line Tap in Chicago.