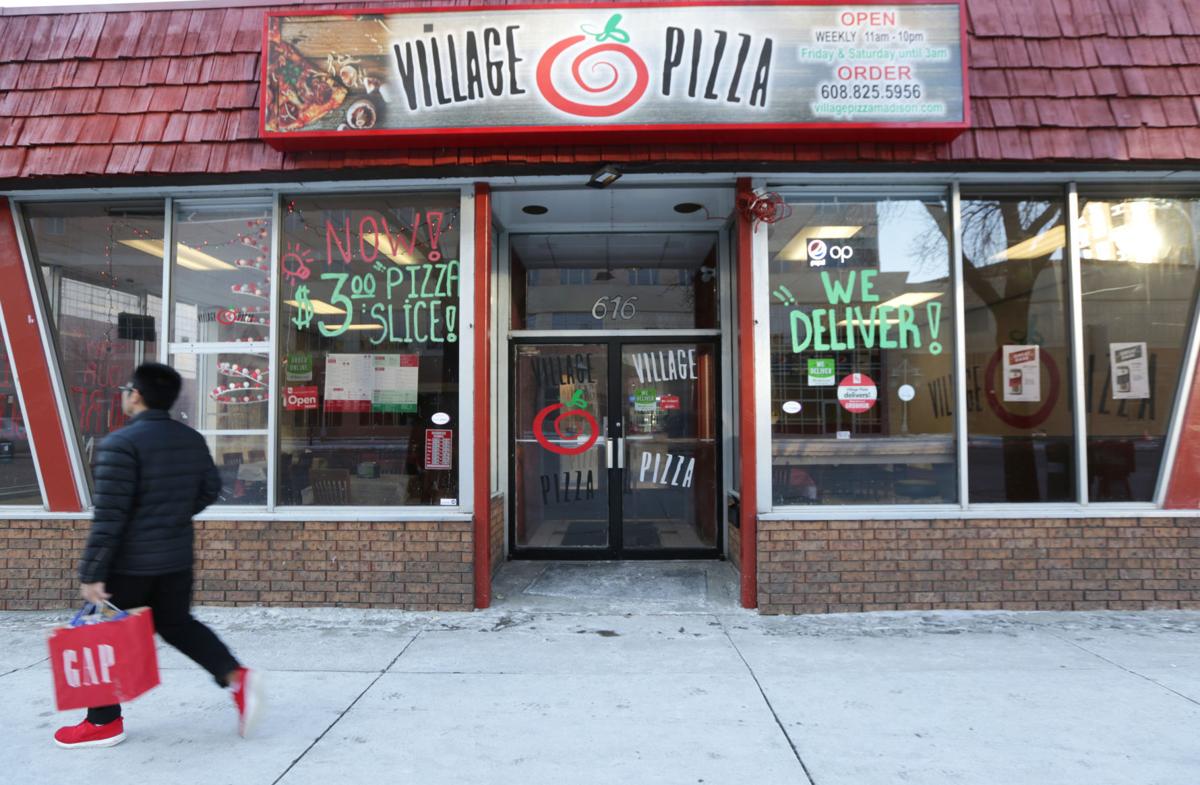 Village Pizza opened in mid-October on University Avenue where Bob's Copy Shop used to be. 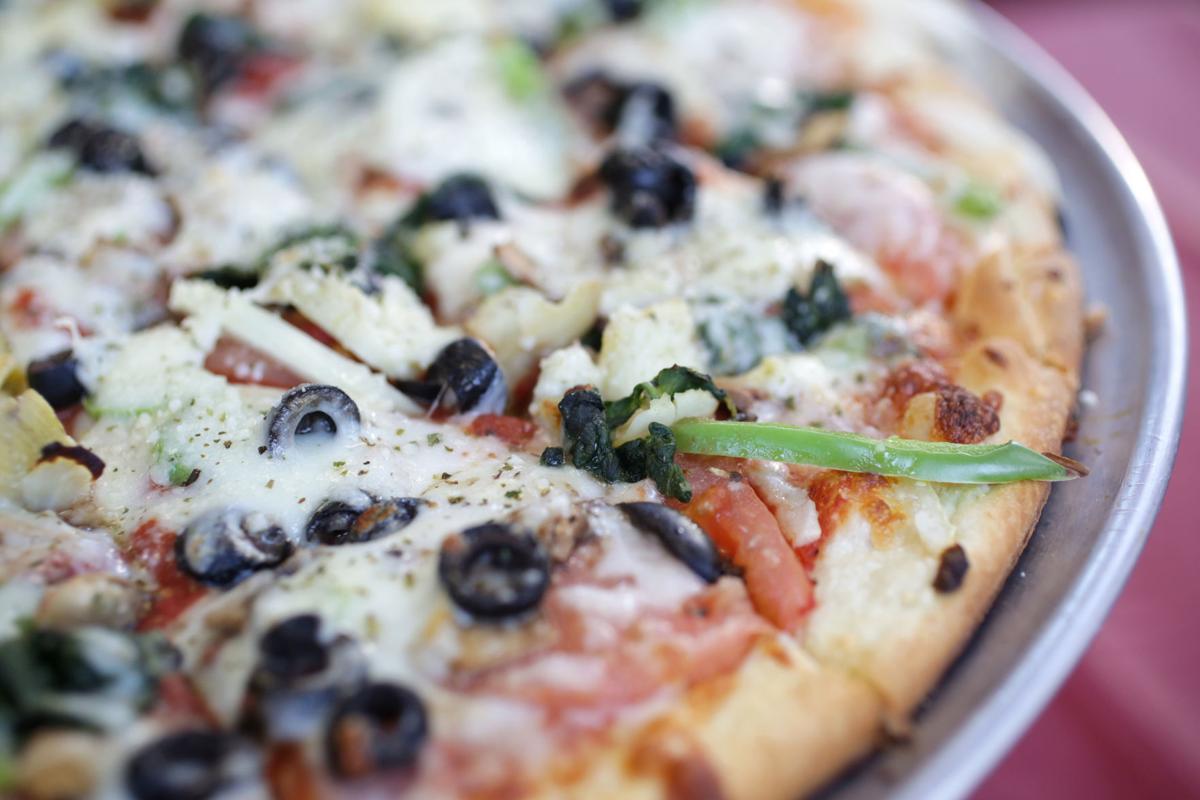 The harvest pizza is generous with its cheese and toppings. 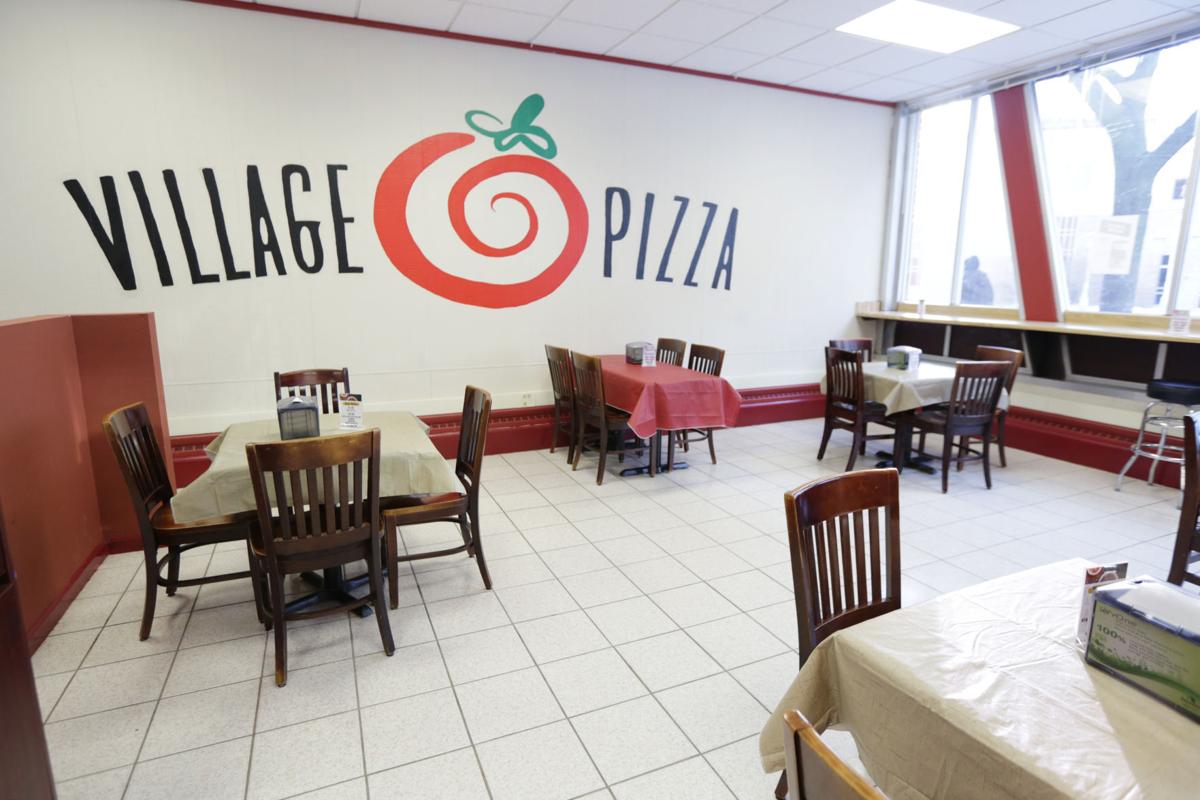 The restaurant is casual with all of its visual impact coming from the fun, swirly tomato logo painted on the main wall.

With an outlet of the Madison pizza-and-salad favorite Ian’s so close by, it’s a good thing Village Pizza, which opened in mid-October on the campus section of University Avenue, is doing so much more than pizza. And it’s in that “so much more” category where it shines.

Brothers Arturo Ruiz and Berna Cazares transformed the former Bob’s Copy Shop into Village Pizza and did a commendable job, remodeling the 2,500-square-foot space, and putting together a menu that offers plenty of appetizers, sandwiches and pastas, in addition to pizza.

The real revelation here is something we ordered on a whim once we finished dinner. It’s not on the menu the restaurant has on its website, and is easy to overlook on the paper menu, where it kind of floats above the appetizers and could get lumped in with them.

It’s a dessert called sweetbites ($6.49), little parallelograms, mostly, and some triangles, of fried dough covered with powdered sugar, which taste like small beignets. The enormous box of “bites” came with a container of chocolate dipping sauce.

Both appetizers we ordered were also deep-fried. The young man who took our order at the counter agreed to let us get a half order of cheese curds ($6.99) and a half order of fried mushrooms, since they were the same price.

It turned out to be a great idea because the mushrooms were excellent and different from any others I’ve had. The huge portobellos were sliced in half, thickly breaded, and fried to a crisp. They came with an excellent marinara for dipping.

The curds were also good: small and salty and with just the right amount of crust. The Caesar salad ($6) was also worth ordering. It was well dressed with crisp romaine lettuce, plenty of Parmesan, and small, tasty croutons.

Turns out the pizza was the weakest link, even though it was loaded with toppings. Our harvest pizza was $17.49 for 14 inches and $18.49 for 18 inches, making me wonder why anyone would get the small one when the large was only $1 more. The vegetarian pizza looked great with plenty of tomatoes, artichoke hearts, mushrooms, green pepper slices, onions, spinach and black olives, and a generous amount of cheese.

Crust options are thin, double dough (with dough on the bottom and the top), deep dish and gluten-free. We went with the regular thin crust, which came out partly charred. That could have been overlooked had the pizza had more flavor, but the tomato sauce was oddly bland.

The menu promised green olives and it came with black ones. Green olives are more distinctive and could’ve perked up the pie. Red pepper flakes helped somewhat.

I’ve never had a Rosati’s Pizza, even though the Chicago-area chain has been in Madison for 18 years. Ruiz compares his pizzas to Rosati’s, since he worked at Rosati’s on Madison’s East Side for about seven years and more recently for two years at the West Side location. He said his pizzas have a different style of dough and different ingredients.

Ruiz, who’s from Mexico City and has been in Madison 17 years, has also cooked for two years at Great Dane Hilldale, managed a McDonald’s location, and spent six months at the Icon on State Street. Ruiz’s brother/partner Cazares worked as a chef at Mason’s Eatery & Pub in Kenosha.

We visited on a quiet New Year’s Day for dinner, and the restaurant seemed to be doing a steady delivery business on a frigid night. The room has a casual, college look to it, with all the visual impact coming from the fun, swirly tomato logo painted on the main wall. Across from it are murals of the Leaning Tower of Pisa, the Colosseum in Rome and canals in Venice.

The main discovery at Village Pizza were those delicious sweetbites. The box held dozens of pieces and was five times more than we needed, so I took the rest with me. No sooner did I get comfortable at home than I began thinking about these delicious bites — and I snacked on them for days.

So much for New Year’s resolutions.

Hours: Sunday through Wednesday 11 a.m. to 10 p.m.; Thursday through Saturday 11 a.m. until 3 a.m. Under the restaurant's liquor license, it can only serve beer and wine until 10 p.m.

Kids menu: No, but plenty of items children will enjoy

Bottom line: Pizza isn't the strong suit of this pizza place. But it does other things well, particularly a dessert item it calls sweetbites.

Taiwanese street food is at home in Madison

Taiwan Little Eats is one of the most interesting, exciting developments on State Street in years.

Getting one last corned beef sandwich and grilled pound cake hot fudge sundae at Ella's Deli hasn't been easy these past few weeks.

Gonzalez family delivers with tacos, tortas and other taqueria essentials

This taqueria with a built in grocery, does the basics and does them well.

Village Pizza opened in mid-October on University Avenue where Bob's Copy Shop used to be.

The harvest pizza is generous with its cheese and toppings.

The restaurant is casual with all of its visual impact coming from the fun, swirly tomato logo painted on the main wall.