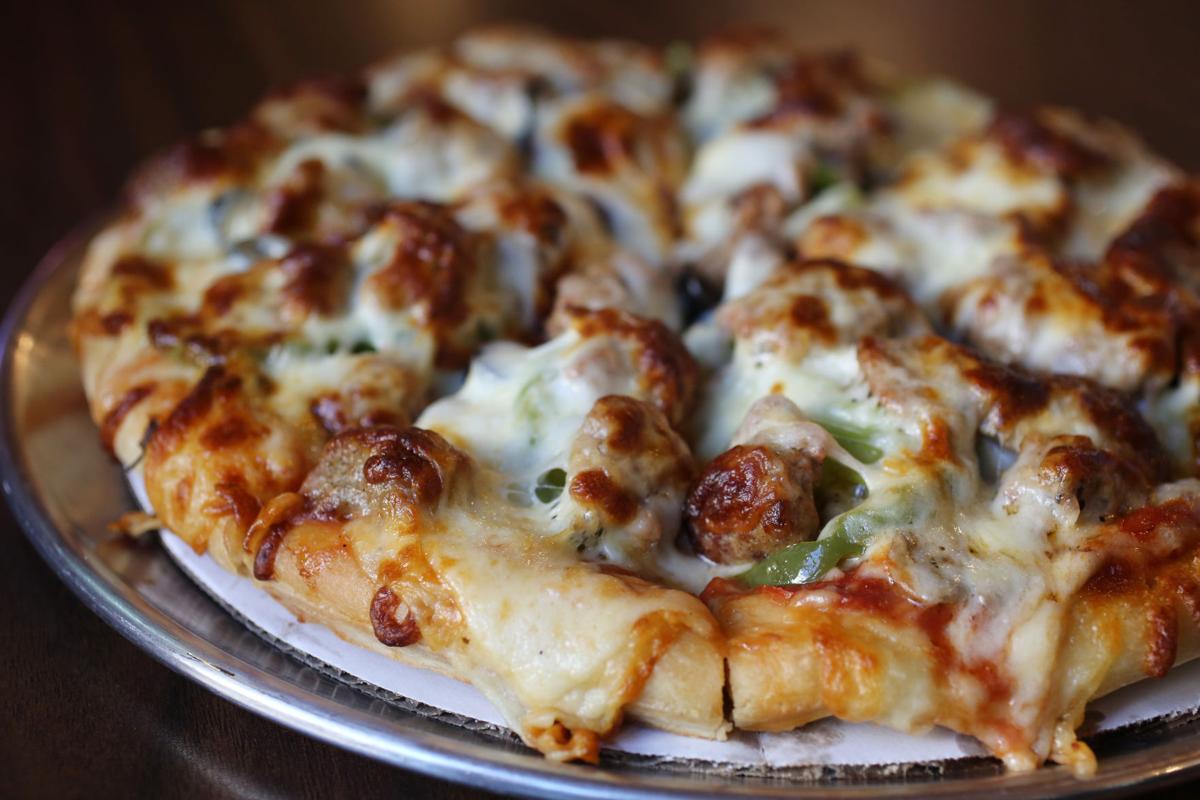 The deluxe pizza at Marcine's is something to behold. There's no skimping at this country bar. 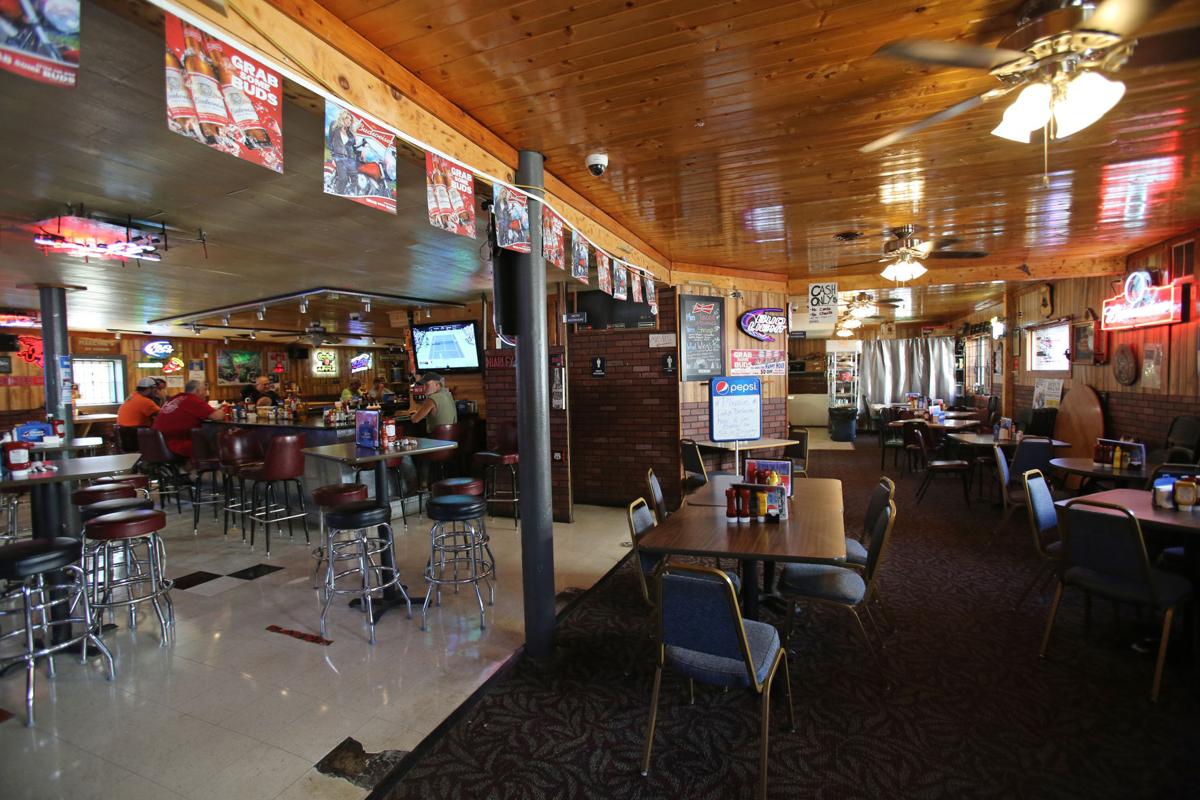 Marcine's is a pretty basic country tavern inside: Wood paneling, a big, rectangular bar, and lots of neon beer signs. A carpeted dining area is on the right. 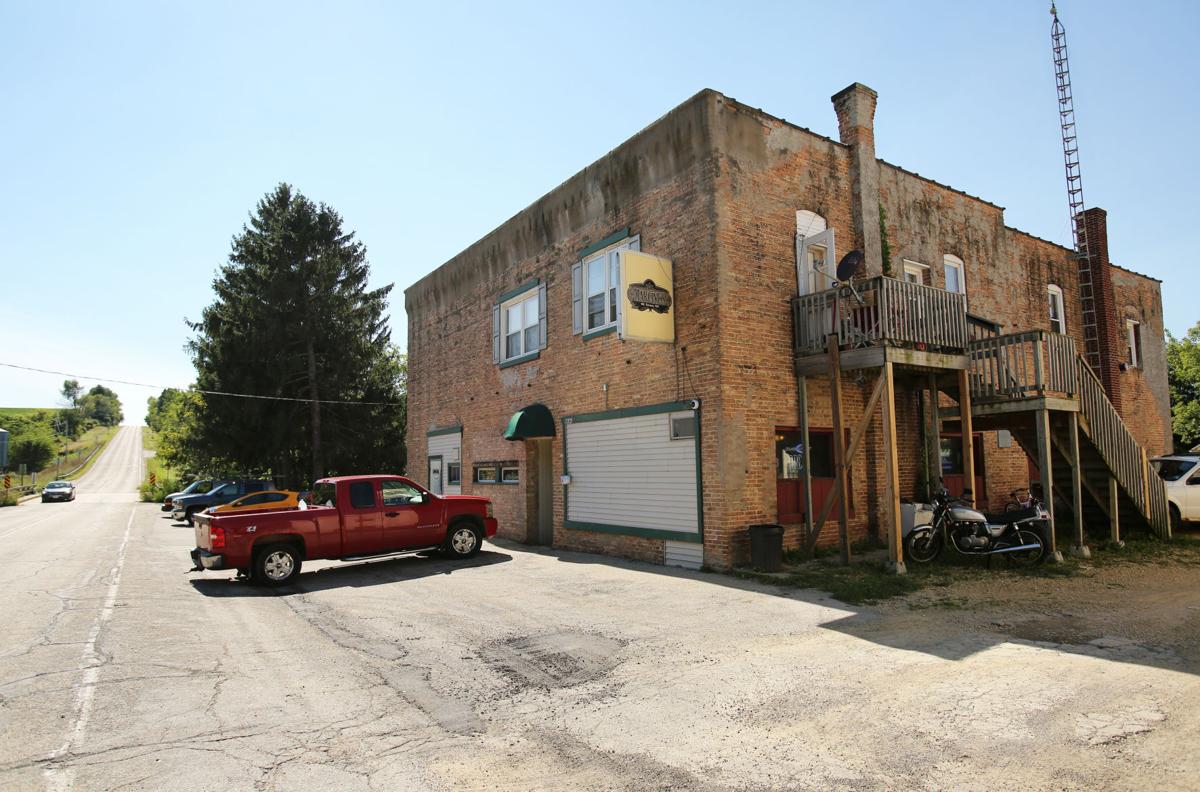 Marcine's, in the unincorporated town of Mount Vernon, is unassuming inside and out. 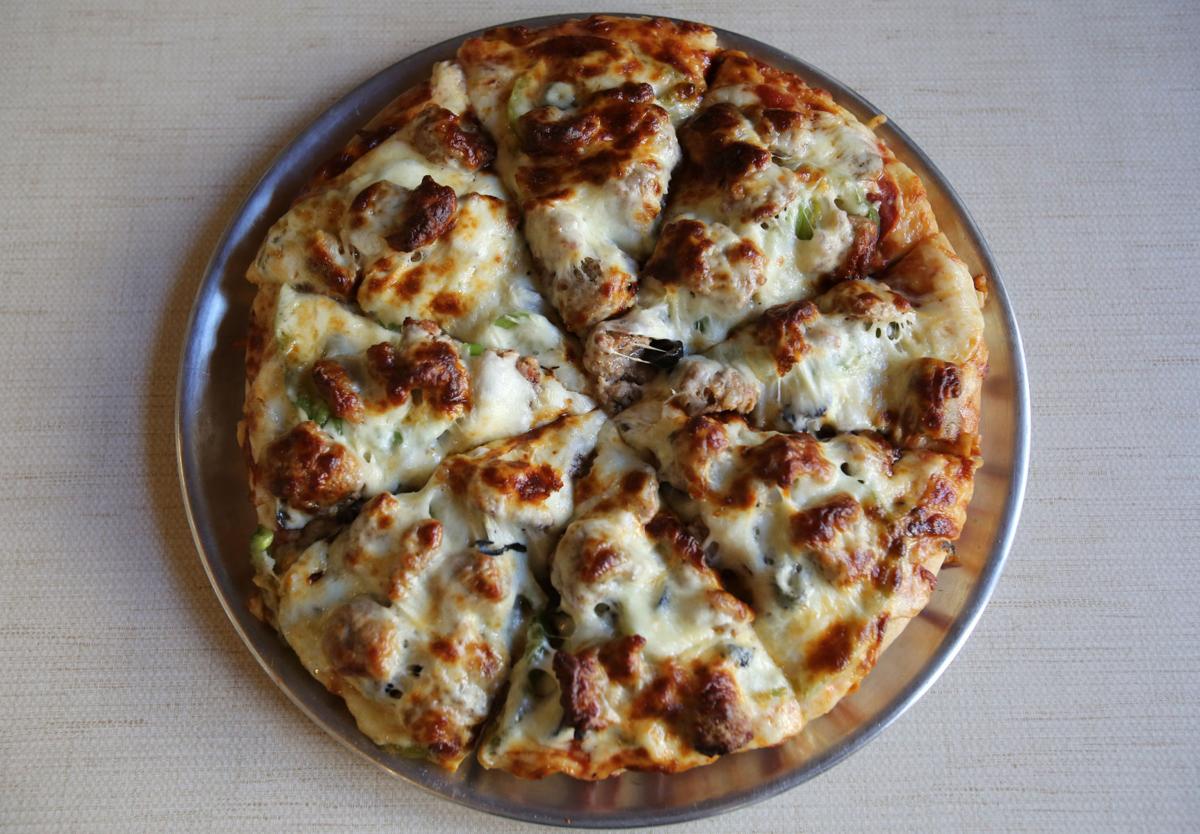 The deluxe pizza at Marcine's. The view from above.

Pizzas at Marcine’s can seem intimidating, with an absurd amount of ingredients piled sky high. There’s no skimping here.

“I don’t know how they make any money off this,” my friend marveled, after a bartender brought our pizza out.

Marcine’s, in the unincorporated town of Mount Vernon, between Mount Horeb and New Glarus, is popular with construction and road workers, if the number of fluorescent yellow work shirts on a recent Tuesday night was any clue. And those are the appetites Marcine’s is catering to with its topping-heavy pies.

April Christenson, who works at the bar, said the tavern draws “every walk of life,” and has been seeing a lot of people from Epic Systems in Verona.

The meat half of our pizza had uninterrupted layers of pepperoni, ham and bacon, with giant balls of sausage on top, covered in cheese. The deluxe half at least had the virtue of green peppers, black olives and mushrooms. But there, too, were those ridiculously big chunks of sausage.

Pizzas come in thin and thick (also called hand-tossed) versions. We ordered the hand tossed, recommended by a bartender, because it has something to hold onto. The crust was still pretty thin.

Marcine Gilbertson, 58, who bought the bar more than five years ago with her husband, Lanny, tells her cooks to load up the pizzas. “When someone orders all these different toppings, I want them to have every topping in every bite,” she said. “They do a fabulous job.”

Be advised that pizzas are not served on Wednesdays after 4:30 p.m., because Marcine’s needs to concentrate on turning out wings for wing night. Another warning: The bar is cash only with an ATM on site. It’s open 365 days a year because Gilbertson doesn’t want anyone to be alone on holidays.

Besides wing Wednesdays, the other nightly specials are: taco Mondays, shrimp Tuesdays, pizza Thursdays and a Friday fish fry.

Since my friend and I stopped in on a Tuesday, we ordered six deep-fried shrimp for 50 cents each. Shrimp come plain or with one of five dry-rub seasonings. The bartender who took our order warned that the seasonings have a tendency to come on strong.

She was right, and it made me wonder why the kitchen doesn’t back off a bit.

“Some people like it like that,” Gilbertson said when I asked about it, noting that people can ask for their shrimp lightly-seasoned. Both the Cajun and Jamaican jerk flavors were good in small doses, while the shrimp themselves were large and of high-quality, with a thick, tasty batter. Cocktail sauce comes on the side.

Marcine’s serves many types of fries, including sour cream ones ($3.25). But what earns them that name is just a little cup of ranch dressing. The fries were extra crispy, and the dressing helped mitigate the excessive saltiness.

My favorite thing at Marcine’s was actually the burger, which is a much more modest affair than the pizza. The bacon cheeseburger with Swiss cheese ($6) is the perfect bar burger, with fresh-tasting meat and a soft, buttered bun. You hardly need condiments.

With wings, shrimp and tacos, they won’t wrap up what you can’t eat, so you’ve got to eat those items in one sitting.

You can take home your leftover pizza, however, and most of it will be left over, since one slice could probably fill up most people.

The bar with its brick exterior doesn’t stand out much, and it’s a pretty basic country tavern inside: Wood paneling, a big, rectangular bar, neon beer signs. The carpeted dining area has a sign telling customers to let the bartender know you’re there.

Gilbertson previously ran Marcine’s in Blanchardville for six and a half years, but sold that bar after someone made her a generous offer.

After she bought the Mount Vernon tavern, she spruced it up and it’s now legendary in southwestern Dane County.

“If you leave hungry,” bartender Christenson said, “it’s your own fault.”

Credit cards: Cash only, no checks.

Bottom line: Sometimes the best burgers can be found in country bars. Marcine's grills up a great burger, but its pizza is something to behold.

Keep up with restaurant news

The year in dining

The year in dining

The Wisconsin State Journal's restaurant reviewer, Samara Kalk Derby, had a busy 2016. Over the course of the year, she reviewed nearly 50 res…

The deluxe pizza at Marcine's is something to behold. There's no skimping at this country bar.

Marcine's is a pretty basic country tavern inside: Wood paneling, a big, rectangular bar, and lots of neon beer signs. A carpeted dining area is on the right.

Marcine's, in the unincorporated town of Mount Vernon, is unassuming inside and out.

The deluxe pizza at Marcine's. The view from above.