The warm, comfortable restaurant Little Tibet developed out of the nearly 3-year-old food cart dZi Little Tibet on Library Mall and is a wonderful addition to East Johnson Street.

Tibetan dZi (pronounced “zee”) are the expensive, prized beads considered to have supernatural powers and bring good luck. Families are judged by how many dZi beads they have, said Little Tibet owner Namgyal Ponsar.

Ponsar and her brothers, Thinley Tenzing and Therten Tsering, have dropped the dZi and taken over an inviting restaurant space, opening it March 11. They inherited the beautiful wooden booths left over from the Spot, which was in the location for about three years, followed by a second outlet of La Taguara.

The Latin American restaurant, with its original restaurant on East Washington Avenue, lasted two years there. Owner Jeykell Badell said he and his wife cried over closing it. Business was unpredictable, but Badell said he thinks Little Tibet has a lot of potential.

And after two recent weeknight dinners, so do I.

The restaurant offers traditional Tibetan, Nepali and Bhutanese food, and Ponsar said she will be modifying the menu within the next five months based on feedback from customers. For instance, she plans to add more vegetarian options.

On my first visit, our entrees came with a small dinner salad that left us nonplussed. Ribbons of lettuce were joined by a couple of grape tomatoes and cucumber slices, but the dressing was ineffectual. It may have been tasty, but there wasn’t enough to get a good sense of it.

The ping alla ($6), a Tibetan spring roll, quickly turned things around. A crepe or pancake-like wrapper was stuffed with crunchy cabbage and carrots, as well as shiitake mushrooms and mung bean noodles. They were drizzled with a sauce Ponsar told me was made with mayonnaise, honey mustard and Sriracha. There were five slices, which between two people left an odd one, so I had to summon my better self to offer it to my dining partner.

A momo section of the menu features three types of Tibetan dumplings, which have a thicker wrapper than, say, the most common jiaozi Chinese dumplings. Joining beef, chicken or vegetable versions this night was a special cheese momo.

We should’ve tried those, because the vegetable momos ($8), eight in an order, were bland. It was hard to tell what all was inside besides potato, but the menu listed green pak-choy, better known as bok choy, scallions, garlic and chives. An excellent tomato-based sauce with ginger perked them up.

Initially, my friend was disappointed that his entrée, Kongpo shaptrak ($13), described as beef with julienned bell peppers, celery, scallions and Gouda cheese, had bone-in chunks of meat. It arrived sizzling on a cast-iron platter, and once cut off the bone, the meat proved tender and flavorful.

Ponsar said that Kongpo is the name of a province in Tibet, and shaptrak translates as “grilled meat.” But the beef here isn’t grilled, she said. It’s half-roasted in the morning, then sautéed when ordered.

The dish came with rice or tingmo (steamed bun) and the latter were actually two soft rolled buns, shaped like a cinnamon roll, that seemed to need another element. HungryBadger, a State Street restaurant that focuses on Nepali momos, makes these same buns with rosemary and red pepper flakes, and those flavors help.

The best part of the meal was the stir-fried vegetables, highlighted by red bell peppers. It was hard to sense the cheese, but the vegetables were well-seasoned and served in a rich soy sauce. “I could just eat these vegetables alone,” my companion said.

The tofu stir-fried noodle ($12), made with homemade noodles in the size and shape of spaghetti, had the same vegetables that showed up elsewhere on the menu. The noodles glistened, but weren’t overly oily. The dish held back on the small rectangles of tofu, but not on heat. It was nicely spicy.

Selections from the smaller Nepali and Bhutanese sections of the menu fared less well, but were still enjoyable. Ponsar said lots of customers have been ordering the Nepali thali ($13) and posting photos on social media.

With the vegetarian version, a silver tray held four matching cups filled with diverse items, including curried cauliflower with peas and carrots; black lentil soup; cold, pickled potato salad; and kheer, a rice pudding dessert. My favorite part was the cooked greens. Roti and thin, crisp papadum were a good complement to some of the snack-sized elements. I found it a fun way to eat, but my friend left unsatisfied because he didn’t get a traditional meal.

Ema datshi ($9), the most famous dish in Bhutan, is a thin, spicy cheese soup full of onions, red chilies and jalapenos cut lengthwise. Datshi is a Bhutanese cheese, but here the soup is made with brie and blue cheese. It took some getting used to, but now I’m a fan.

The hot masala chai tea ($2) was nicely sweet, and my friend was happy with his $6 glass of Jacob’s Creek Australian Shiraz.

Dessert is a high point at Little Tibet. The thali gave a sample of the kheer, but it’s worth getting a full order ($4). The rice pudding was liquidy and could have used a few more raisins, but its low level of sweetness was perfect.

Better was the warm ginger bananas with chocolate ice cream ($5). Small pieces of ginger were fried in butter until crisp and scattered on top of the bananas, taking the dish to a new level.

Little Tibet may have lost its dZi, but in many ways it’s still a jewel.

Accessibility: Ramp in back. Stairs in front.

Vegetarian offerings: Some, but more coming within five months 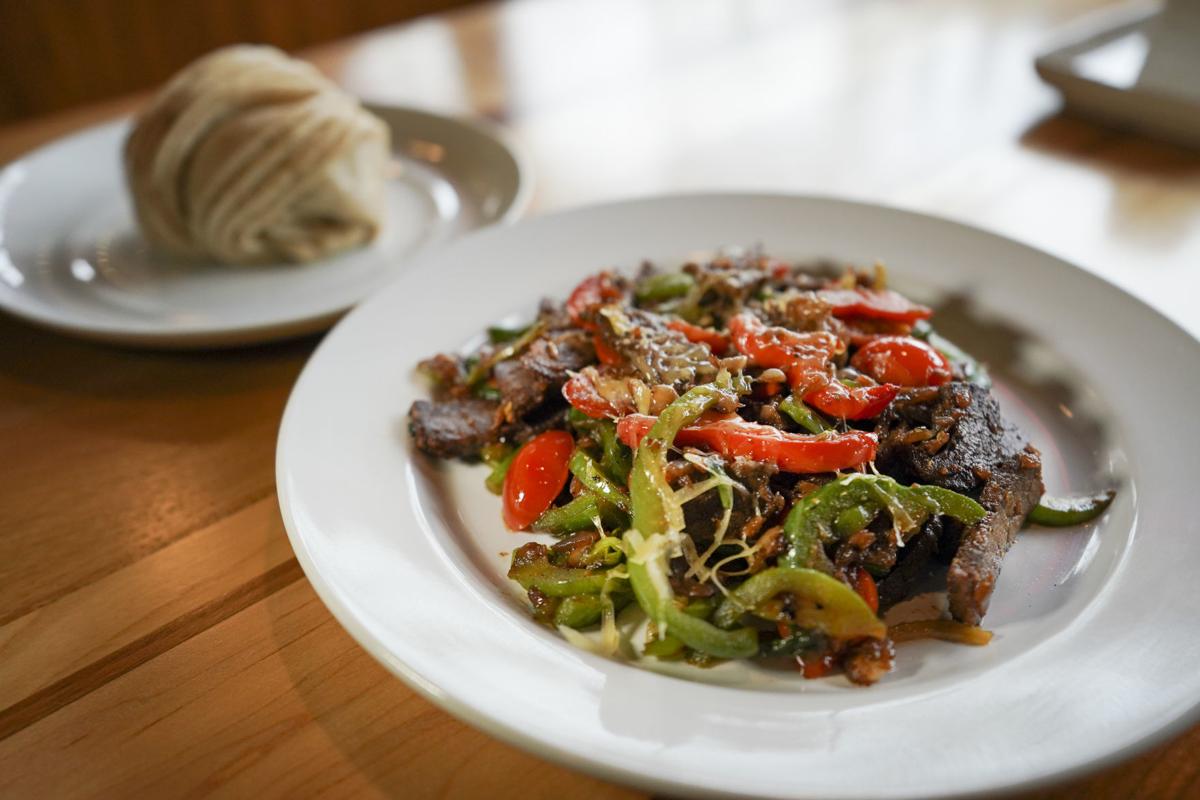 Kongpo shaptrak is beef with stir-fried bell peppers, celery, scallions and Gouda cheese. It comes with rice or a steamed bun. 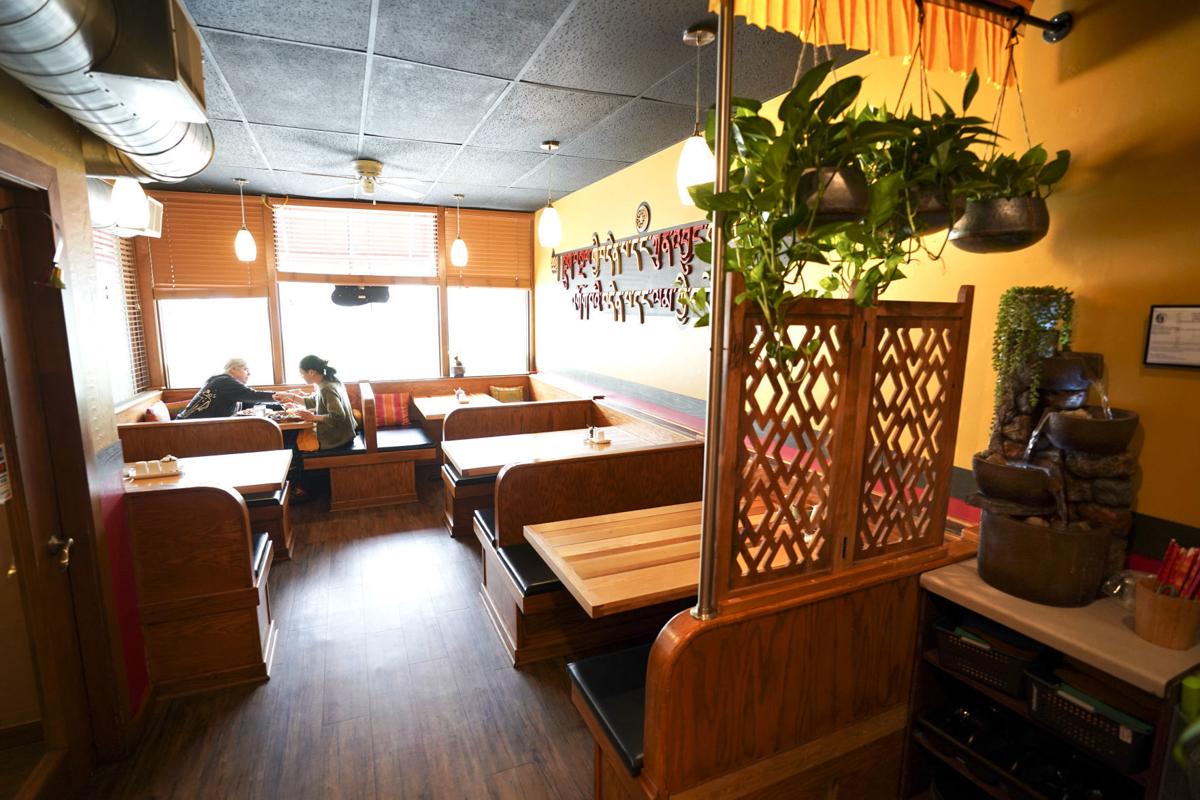 Little Tibet has made the former La Taguara space its own with Therten Tsering's art piece featuring the four noble truths of Buddhism, at right. Tsering, a part owner of the restaurant, said he had help from his brother-in-law with the Tibetan script. 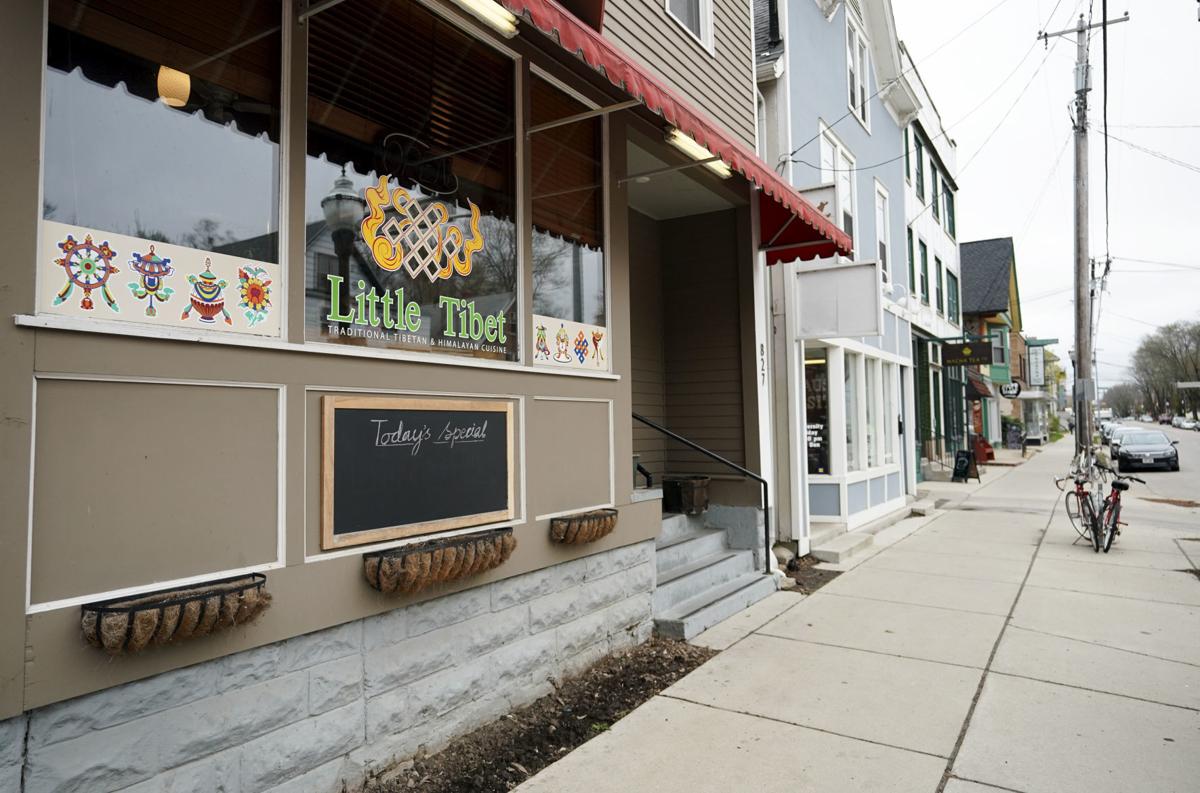 Little Tibet on East Johnson Street is inviting inside and out.