Ella's Deli, known for its interior full of moving toys and its carousel outside, will be missed by many. The sign outside the East Washington Avenue restaurant reads "Thanks Madison." 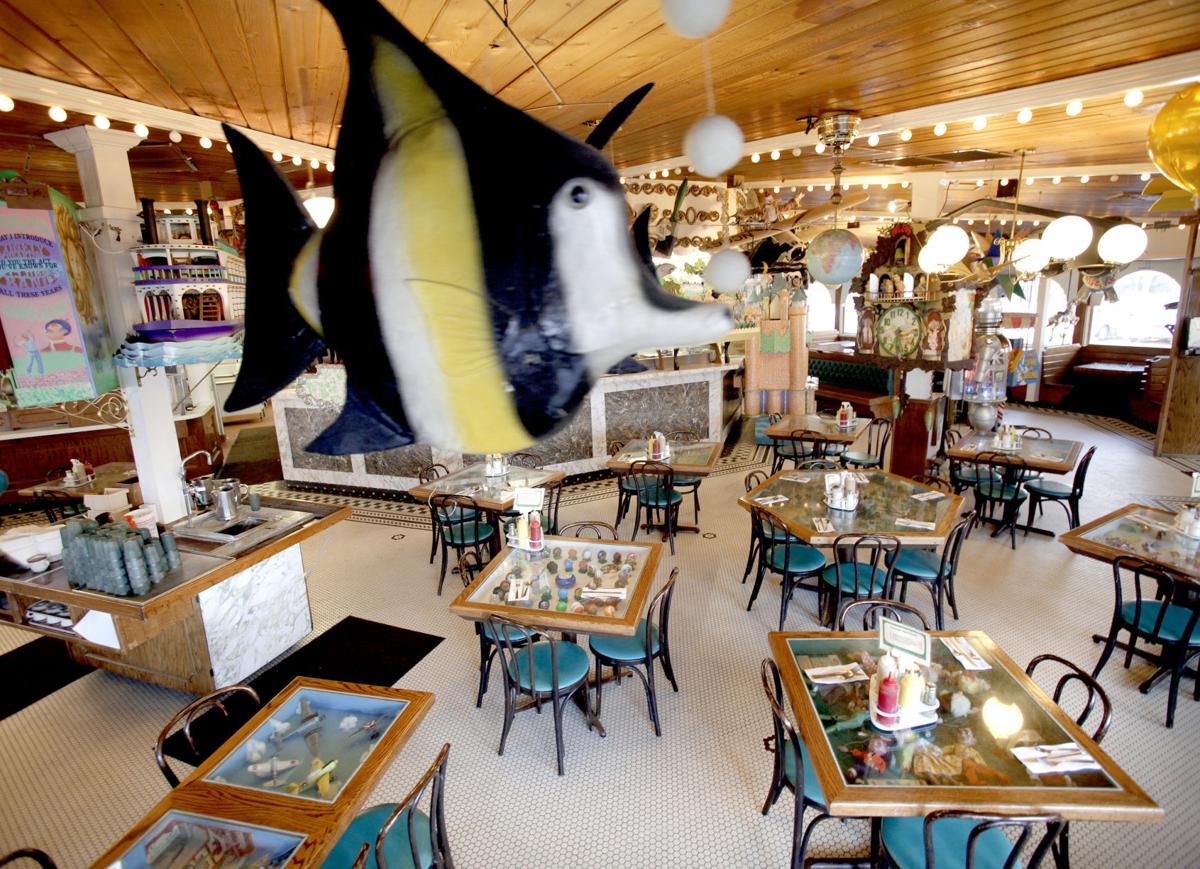 Ella's Deli can provide visual overload with all kinds of characters flying overhead and displays and games inside glass-topped tables.

Ella’s Deli and Ice Cream Parlor, the Madison institution known for its creative moving toys and “masterpiece” sundaes, will close this month unless a buyer steps forward fast.

News leaked out in May that the whimsical, toy-filled restaurant on East Washington Avenue was for sale, but it was unclear if and when it was going to close.

Ella’s owners put an end to that speculation Wednesday with a post on the restaurant’s Facebook page that it will close in a few weeks.

They put their message out now to try to drive interest in a sale, said Ken Balkin, who owns Ella’s Deli with his wife, Judy.

“We have decided that the time is right,” Balkin said in a phone conversation Wednesday. “The economics have just been difficult recently. The competitive nature of the restaurant business in Madison is pretty brutal.”

Balkin said staffing has been difficult and paying a living wage is always on their minds. He and Judy are also interested in retiring after more than four decades.

“This will hopefully jump-start it to find an interested party, and we’ll see where that goes,” Balkin said. “We hope it lives on, and if not, we want to show our appreciation to the community and all of these generations and people who have come here.”

According to the listing by Oakbrook Corp., the sale includes a three-unit rental property next door at 2912 E. Johnson St. Balkin said the 1929 vintage Parker carousel in front of the business is also part of the sale.

Inside sit many smaller, model carousels, while overhead on wires hang an assortment of superheroes, trains, planes, clowns and robots, and characters such as SpongeBob Square-Pants and Harry Potter. Some tables have glass tops with displays or games inside.

Balkin describes the eccentric items that cover every inch of the restaurant as “fun, fanciful things that we like to think made us different.”

He hopes they captured the imaginations of young people and their families and gave them a thrill. “That was kind of the evolving concept over all these years,” he said.

Ella’s collection of whimsy could be included in the sale if a buyer were interested, Balkin said. If no one steps in to take over the restaurant as it is, he will find a buyer for the collectibles at that point, he said. Right now Balkin is mainly concerned with getting word out about the sale.

He points to his Facebook post, which states: “It is with sad hearts that we announce that Ella’s Deli will be closing at our current location. It has been our privilege to be a part of the Madison community for 42 years.”

The 42 years refers only to the East Washington Ella’s, which opened in 1976.

A history of the restaurant on Ella’s website says that Ella Hirschfeld started Ella’s on State Street as a small kosher-style deli, grocery store and restaurant in the early 1960s.

Balkin’s parents took over the State Street site in the mid-’60s, before the East Washington Avenue restaurant was established. They “eliminated the grocery concept and expanded into a full service kosher style deli/restaurant ... with an additional and separate dessert menu,” the website says.

According to a Wisconsin State Journal story, when Ella’s on State Street closed in 1999, it was one of State Street’s oldest businesses. That location is now home to Hawk’s Bar and Grill.

The restaurant has an ice cream counter with 26 flavors of Chocolate Shoppe ice cream and is famous for its pound cake sundaes.

Balkin and manager Catie Tollefson asked a reporter not to talk to employees or customers at the restaurant about its closing. “Our focus right now is on thanking the community,” Tollefson said. “It’s really all we are interested in right now.”

Tollefson said Ella’s has about 65 employees, but that number increases to about 100 in the summer. Many of the workers have been with the Balkins for years. “The number of longtime employees is a testament to Ken and Judy and the way they run the business,” Tollefson said.

Meanwhile, Balkin said Tollefson and his other manager, Alan Orvis, are “everything to Ella’s.”

The Facebook post, a version of which is on the Ella’s website and printed out and displayed on tables in the restaurant, thanks the restaurant’s customers and employees.

“Ella’s has always been about people and we are so very grateful to all our customers and employees,” it says. “To the many families that have visited us, including over multiple generations, we have enjoyed getting to know you and meeting your children and then your children’s children. To the thousands of amazing former and current employees we have had over the years, your dedication has made Ella’s the award winning destination it is today.”

It goes on to say: “We hope you can visit us, say hi, and enjoy your favorites one last time. Our last day of business will be around January 21st. We may modify our hours to accommodate our employees. We will update on our Facebook page with changes as we make them.”

Finally, the message left room for optimism about a revival of the beloved deli: “Our goal is to continue the Ella’s tradition. It is our hope that Ella’s will be back under new ownership, in a new space, and with a new and exciting direction.”

Diane Morganthaler, executive vice president of the Greater Madison Convention & Visitors Bureau, called Ella’s Deli a special place, not just for the community, but for visitors, too.

“The Balkins created a whimsical world that put smiles on the faces of generations of children who rode the carousel outside, marveled at the myriad toys inside, and couldn’t eat their dinner fast enough to get to what they really wanted — an ice cream masterpiece.”

During a conversation Wednesday, Balkin said he didn’t want to get too nostalgic. He just wants to put out word of the closing. “We’re hoping it lives on. If there’s a breath of fresh air, we would be really pleased if that were the case.”

After five years on Madison's West Side, KJ’s Curry Bowl is closing after dinner service on Dec. 29.

Chicken Run to open in former Crandall's, after delay

The restaurant is expected to open Tuesday in Middleton. It's a spin-off of a restaurant in Sterling, Illinois, which has been in business for 50 years.

A spokeswoman for the network said the episode featuring the L'Etoile chef, scheduled to air Wednesday, will not run next week, either.

Come together to save Ella's Deli -- Sena Pollock

I read in the newspaper that Ella's Deli is closing. It is my favorite ice cream place. I don't want it to close.

Getting one last corned beef sandwich and grilled pound cake hot fudge sundae at Ella's Deli hasn't been easy these past few weeks.

Window closing on the rescue of beloved Ella's Deli

Ken Balkin, who owns the building, said people are constantly coming to the door and calling, but the right person hasn't come forward with an offer to buy.

Goodies including custard machines, sundae dishes, interior decor items and a back-up carousel will be up for grabs in an auction Thursday.

Ella's Deli, known for its interior full of moving toys and its carousel outside, will be missed by many. The sign outside the East Washington Avenue restaurant reads "Thanks Madison."

Ella's Deli can provide visual overload with all kinds of characters flying overhead and displays and games inside glass-topped tables.