If your favorite Babcock ice cream flavor is chocolate turtle, mocha macchiato or another one that didn’t make the cut, you’ll be going without it for the next two years.

Since it’s no longer prime ice cream season, changes in what flavors are available may be going unnoticed by fans.

But while Babcock Hall at UW-Madison is undergoing renovations, Babcock ice cream is being made by the Chocolate Shoppe, and flavors have been scaled back.

The dairy plant closed Sept. 23 for a major renovation as part of a broader Babcock Hall construction project that’s been going on for about 16 months, said Heidi Zoerb, associate dean of the College of Agricultural and Life Sciences.

“It’s the first significant renovation, really, since the plant was built,” Zoerb said.

“If you’ve driven down Linden Drive lately, you would have seen all of that construction in process,” she said.

Babcock ice cream has been produced by the university’s Department of Food Science in the dairy plant since 1951.

Even though renovations to the plant itself haven’t started, as part of Babcock Hall’s construction, the power and water get shut down at times, which would have disrupted ice cream production, Zoerb said.

The Babcock Hall project will expand the Center for Dairy Research, a research institute which focuses on dairy products. The project is also updating 29,000 square feet of the plant.

The university used the state bidding process to find an external vendor to manufacture the ice cream while the plant is closed, Zoerb said.

The Chocolate Shoppe is producing 11 or 12 flavors at any time, she said. Before its shutdown, the dairy plant made as many as 26 flavors, including frozen Greek yogurts and sherbets.

Carl Korz, Wisconsin Union associate director for dining and hospitality, said the two union ice cream stands have the same amount of ice cream with a 35 to 40 percent reduction in the number of flavors.

“We don’t have a volume problem. But we essentially have a reduced amount of flavors at this point. We have about eight different flavors of the Babcock ice cream that everybody knows and loves available. It’s the same great experience.”

Before the construction, 12 to 16 flavors were available at the Memorial Union and Union South, Korz said.

Korz said that many popular flavors are still available. “Everybody’s got their own popular flavor or their own idea about that. So, in some cases, we don’t have what consumers may want, but Babcock always does kind of a rotating variety in addition to the core items that we have.”

Zoerb said the Chocolate Shoppe is making seven flavors in three-gallon tubs, the size of the containers ice cream is scooped out of at the student unions, half-gallon sizes, and pints. Popularity dictated what those flavors would be.

Vanilla is Babcock’s top-selling flavor, “which always surprises me as a non-vanilla eater,” Zoerb said.

The Babcock Hall Dairy Store, in front of the dairy plant, will keep its usual hours during the plant’s renovation. It will continue to serve lunch and breakfast and sell cheese along with ice cream, Zoerb said.

The plant has produced 75,000 to 100,000 gallons of Babcock ice cream annually. During peak ice cream season, it’s available at about a dozen sites on campus and about a dozen off-campus retailers.

With the reduced selection at the student unions, some customers are trying new flavors, Korz said.

“For some people, we have their flavors that they love and they get exactly what they want. We do have sundaes and malts and other things,” he said.

“Some customers are doing just fine with this. But we’ve got some who are disappointed, as well, because we don’t have as wide of a selection as we usually do. But we’re trying to make the best of the situation.”

Teams will participate in regional competitions at different UW campuses on April 24. The two highest-scoring teams from each region will go to the finals at the state Capitol on May 15. 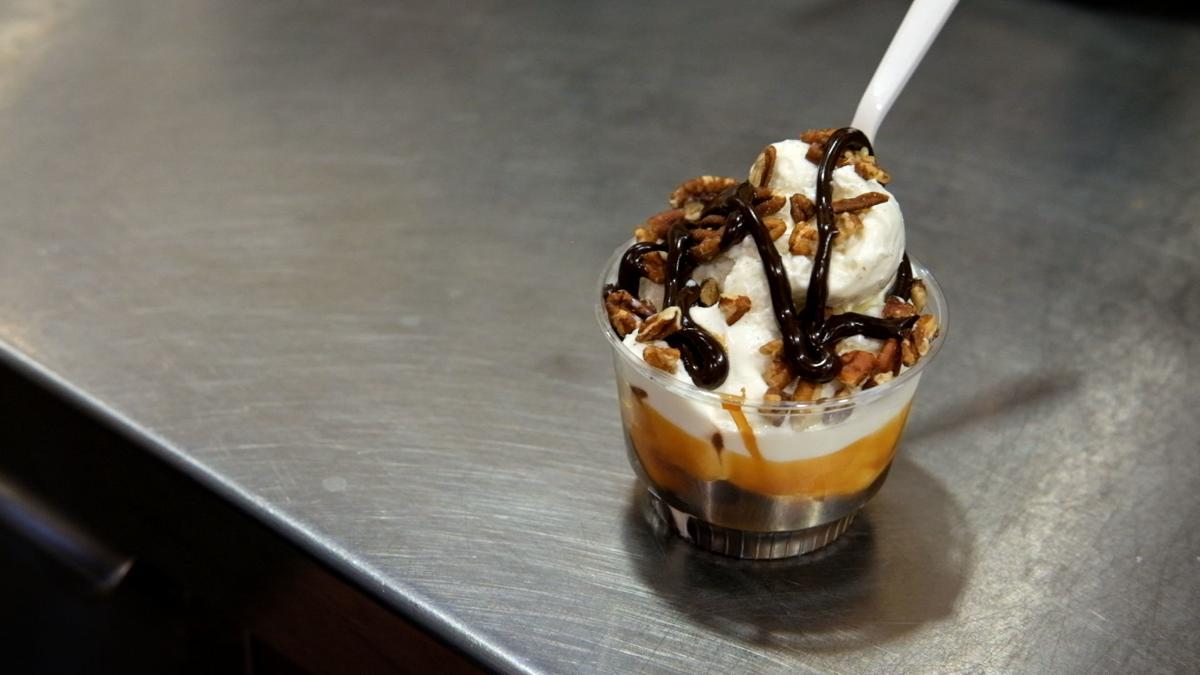 A fresh turtle sundae at the All Dairy Store in UW-Madison's Babcock Hall.

The variety of Babcock ice cream available is being curtailed for the next two years.