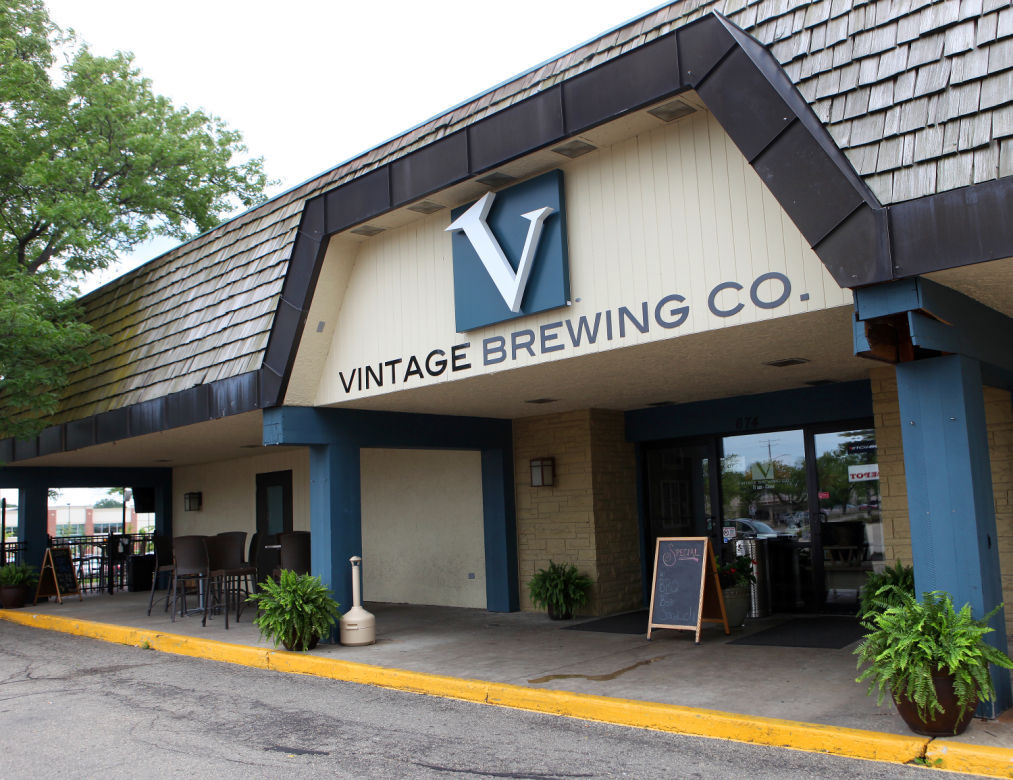 Vintage Brewing Co. marked its 500th batch of beer -- brewed at the end of June -- with a new beer, Milestone English-style barleywine.

A brewery’s inaugural brew should be a joyous event, the culmination of a lot of hard work and planning.

And Vintage Brewing Co.’s first brew, in February 2010, was all of that. It’s just that the beer — it was supposed to be Weiss-Blau hefeweizen — didn’t quite rise to the occasion. Brewmaster Scott Manning’s Batch 1 ended up being what they call a drain pour in the brewing industry. So Batch 2, Scaredy Cat oatmeal stout, was the first brew to hit the West Side brewpub’s taps.

Manning’s track record has improved considerably in the intervening years, to the point that it seems unfathomable that Vintage hasn’t been open even five years. Vintage feels like an integral part of the Madison beer scene, more﻿ than its age suggests.

We take this look back on the occasion of a nice round number: Vintage’s 500th brew, which is on tap now in the form of Milestone, an English-style barleywine.

The Vintage story begins with Trent Kramer — Manning describes his cousin, one of several family partners in the business, as the “other dreamer” — passing by the “For Lease” sign in front of J.T. Whitney’s, a brewpub that closed in 2009. Manning was in Reno, Nevada, at what turned out to be his last of several Western posts with the brewpub chain BJ’s. It was a good living, but the appeal of returning home to Wisconsin to open a place of his own with several family members was too strong.

Since then, the Vintage has developed an eclectic, inventive mix of beers that Manning attributes more to customers’ preferences than to his own brewing interests — though they do happen to line up.

“My personality is very squirrelly,” he said. “I work through a very broad scope.”

Vintage’s third-ever batch was Dedication, a decadent Belgian dubbel named for the hard work everyone in the family and the employees put in to get the brewpub ready for opening. Manning was surprised at how popular that 9.2 percent ABV beer was, a success that emboldened Manning to develop what has become an emphasis on Belgians. “Nobody has really gone deep” on those styles, Manning said.

Given the broad range of Vintage’s beer, it’s kind of fitting that the commemorative 500th batch was of a style variation rarely seen at Vintage — or many other breweries.

That barleywine — named Milestone, a double entendre evoking the kind of navigational aid you’d see along a hedgerow lined country road in England — is a monster. It was brewed June 30 — by the time you read this, Manning will be on Batch 560 or so — and required a full two months to ferment.

Manning chose the more nuanced English variant over the far more common American barleywine in part as an ode to a stretch he spent in England after his graduation from UW-Madison in 1996. As a bartender at The White Horse in London, he bore witness to one of the most extensive real ale programs anywhere, just as the movement to preserve the tradition of cask-conditioned beer was beginning to gather steam. Manning said the White Horse’s attention to detail and recordkeeping in managing the casks and optimizing the beer was a major influence on his interest in and approach to brewing.

Over several centuries, English brewers have developed complementary hop and malt varieties in step, and their traditional emphasis is on depth of malt flavor, Manning said. That comes through particularly on the barleywine, England’s most extreme beer, though Manning notes even that has the patently English, even-keel approach: “Even their idea of going over the top is pretty measured.”

What it’s like: The most common barleywines around here — Sierra Nevada Bigfoot, Three Floyds’ Behemoth, AleSmith’s Old Numbskull, the Thumbprint New Glarus put out a few years ago — are of the hoppier American variant. But the English category does include one American classic: Anchor’s Old Foghorn.

Where, how much: Milestone is only available at the Whitney Way brewpub, and Manning estimates supplies should hold on for another week or two. But Milestone will return, as some of the 10-barrel batch was socked away for further aging: Five bourbon barrels’ worth that will be tapped as they’re ready (barrel-aging is an inexact science) and one absinthe barrel that will be opened at Vintage just before the holidays. Barrel-aged Milestone is sure to make an appearance at Vintage’s annual Big Barrel Tararrel during Madison Craft Beer Week in May.

The beer: Milestone arrives in a stemmed tulip glass, orange and gently carbonated with a mild aroma that doesn’t give much away. A sip begins with a little carbonated sizzle on the tongue, but layers of malt run the show: toffee foremost, as well as plumlike notes that edge toward the tartness of wine or sherry. Its medium body is pretty smooth and easy-drinking for as big as it is. I get the sense that even four months after brewing, Milestone is a young beer, so I’ll be curious to try the barrel-aged versions and I can’t help but think it’d be better around the time the 600th batch is coming out of the fermenter. In any case, adjust your expectations, ﻿ Milestone is proof that a big beer doesn’t need to blow you away with intense flavor to satisfy.

The buzz: Milestone is one of a host of big beers ﻿at Vintage right around now, including the GABF medal-winning Wee Heavy and Max Stout, a Russian imperial whose name is a play on the mash tun “maxed-out” with grains. In past years most of the Max Stout brew was destined for bourbon barrels, but Manning said this year’s double batch will allow more of the base brew to be tapped at Vintage and other bars and restaurants around Madison.

Vintage, which self-distributes its beer, sells kegs to more than 50 accounts, most of them on a rotating or sporadic basis. After brewing 1,333 barrels last year, Manning has pretty much hit capacity at about 1,600 barrels this year.

It has Manning and the other owners “actively looking for more outlets” to add to the portfolio that already includes Vintage Spirits & Grill on University Avenue near UW-Madison and The Woodshed in Sauk City. Manning said they haven’t zeroed in on any properties or general areas, but beer fans on Madison’s East Side will enjoy hearing that another location is a strong possibility. A production facility to bottle or can Vintage beer on a larger scale, however, is very unlikely, Manning said.

And I think that’s OK. Manning described as Vintage’s guiding philosophy this way: “How do we make this moment, now, most awesome?” I’d say what Vintage has going on — crisp execution of classic styles, experimenting with hybrid twists or unusual ingredients and a robust barrel aging program, not to mention the food I enjoy every time I go there — is working just fine at the current scale.

Sixpoint Resin: The awesome year-round imperial IPA from Brooklyn, N.Y., will soon debut in a six-pack of 12-ounce cans, up from the current four-pack. Look for these right away for super-fresh Resin.

Tallgrass Zombie Monkey: The seasonal robust porter from Kansas is back for a second year in its extra-grippy "tactical" tallboy cans. Four-packs of 16-ounce cans.

Tyranena Devil Made Me Do It!: The imperial oatmeal coffee porter from the Lake Mills brewery's limited Brewers Gone Wild series returns. Four-packs of 12-ounce bottles.

Beer Baron: Please use a glass; these are a good start

Choosing the right glass for your beer is easier than it sounds -- and a set can make a great holiday gift.

Slideshow: The year that was in Beer Baron columns

Revisit every Beer Baron column for the year 2014.

Scaredy Cat oatmeal stout followed up a bronze medal at the Great American Beer Festival last fall with a gold this month at the World Beer Cup.

How well do you know beer? Take our quiz and find out

So you think you know your Wisconsin craft beer? Take our quiz and find out.

The venerable brewpub is offering $2 pints of its original seven beers from opening Nov. 10 to close Nov. 16 at all its locations.

Vintage Brewing Co. marked its 500th batch of beer -- brewed at the end of June -- with a new beer, Milestone English-style barleywine.