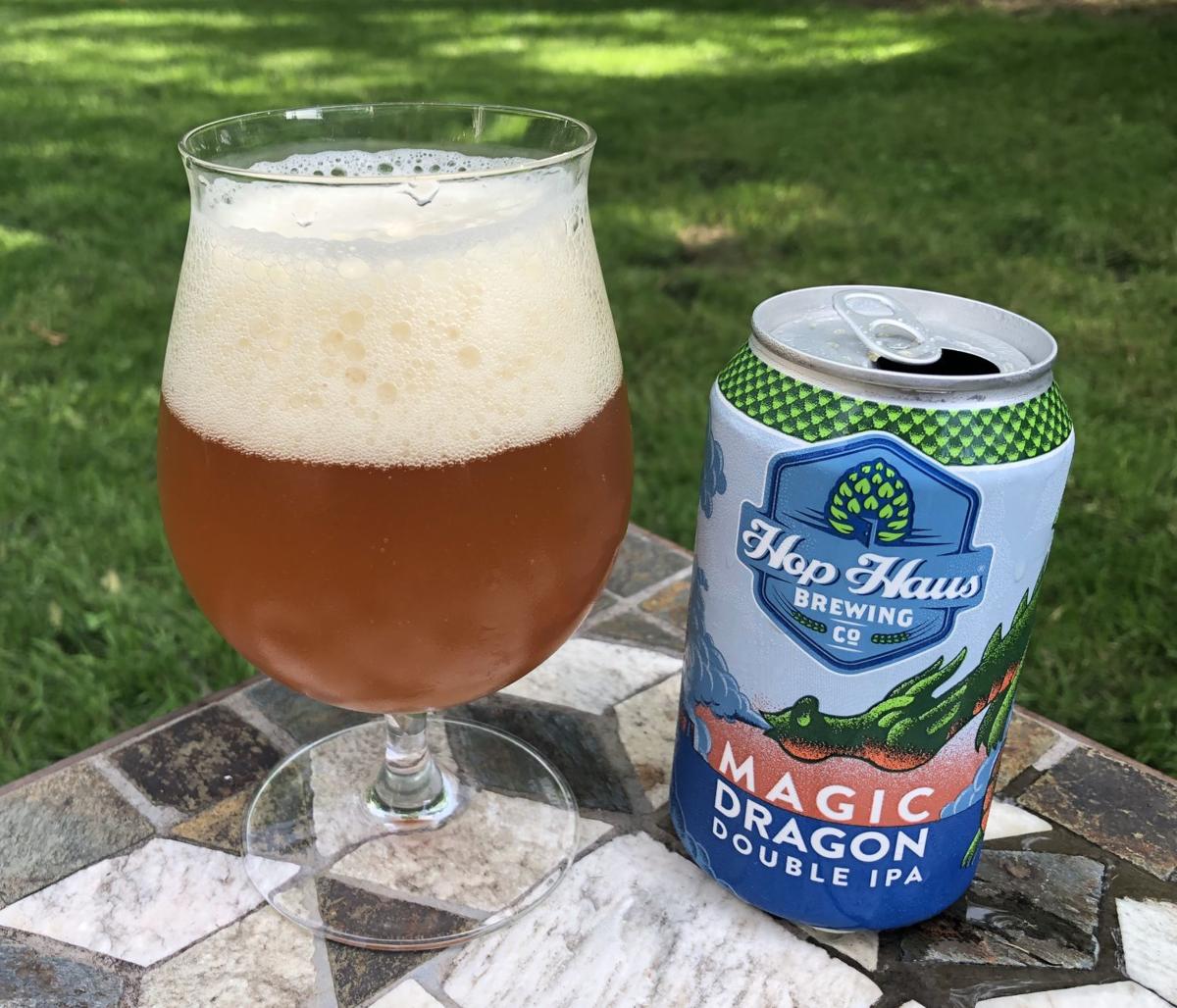 Magic Dragon is a double IPA from Hop Haus Brewing in Verona, which is planning to build a larger brewery in Fitchburg.

The Verona brewery announced early this month that it plans to build a new, 13,000-square-foot brewery, taproom and restaurant in Fitchburg by next summer.

It’s a big step up in every way from the current Hop Haus on Verona’s Main Street, which opened in 2015 and will remain after the new facility at Seminole Highway and Sub-Zero Parkway opens.

The $4 million new location will include a full bar and expanded food menu as well as a space for private events. Accommodations look A-plus, too: Architectural renderings show a rooftop deck and an expansive outdoor patio with a firepit and lawn area with games and room for kids to frolic.

All of it plays directly into what owners Phil and Sara Hoechst are striving for.

“Our goal when we opened Hop Haus in Verona was to create a gathering place where our community can gather over a pint of beer and worthwhile conversation,” said Phil Hoechst, who is Hop Haus’ brewmaster. “This is even more true now with the new space. We focus on providing a welcoming and open atmosphere with a fun mix of beers that everyone can enjoy.”

The brewing side of things will get a big step up, too. The new Hop Haus will include a brewhouse that can kick out 15 barrel-batches, up from the 3-barrel system in Verona. The annual capacity upon opening will be 2,500 barrels per year, Phil Hoechst said, with room to grow up to perhaps 9,500 barrels if needed, up from about 350 in Verona. There’ll also be room for barrel-aging beer, and a canning line that will allow the Hoechsts to bring all of their production in-Haus.

In 2017, after a year and a half of draft-only sales, Hop Haus began selling bottles in supermarkets and bottle shops, later switching to cans. All of that beer has been produced at Octopi Brewing.

Hoechst said Hop Haus beer will be distributed statewide in the next few months but noted that piece of the business has always been secondary.

“Our distribution side is an added bonus to our sales, honestly,” Phil Hoechst said. “Our No. 1 goal is to get people into our space.”

Hoechst noted that the batches being half the size of those currently made at Octopi will mean fresher beer on shelves, more variety and a better response time if his distributor needs more beer.

This week’s beer is my favorite so far of Hop Haus’ package offerings — one with enough staying power to remain in the lineup since Hop opened distribution two and a half years go.

What it’s like: This beer is a showcase for the Mosaic hop, and one of my favorite beers in this world is Toppling Goliath’s Mosaic double IPA Sosus. Magic Dragon doesn’t quite hit that high mark, but it does sing some of the same notes.

How much: Magic Dragon is Hop Haus’ best-seller in cans and fetches a premium: About $12 per six-pack, vs. about $10 for its other offerings such as Sweet Sunglasses blonde ale, Plaid Panther scotch ale and Secret Stash IPA.

Up close: Magic Dragon pours a slightly hazy orange-amber, with aromas of tropical fruit and just a hint of candy-like sweetness and that Mr. Hyde dankness I love so much about Mosaic.This beer drinks beautifully, with a soft, easy body that belies its “double” status. It’s bitter like an IPA should be — particularly on the finish — but far from over the top, with a sweetness accented with a pineapple/citrus hop character. Slow down enough on this one to let it warm up and the rougher edges of Mosaic will present: a kind of cat-pee dankness that sounds terrible in words but is pretty tasty in a beer.

Hop Haus will join a growing contingent of Wisconsin breweries with multiple locations.

Locally, we have the Great Dane (four locations in the Madison area and one in Wausau), Vintage Brewing (Madison, Sauk City and the new Tangent taproom on East Washington Avenue), Parched Eagle (Waunakee and a taproom on East Washington Avenue), One Barrel Brewing (Madison and a new taproom in Egg Harbor) and O’so Brewing (Plover and a new taproom in Madison).

Baileys Harbor-based Hacienda Beer opened a taproom on Milwaukee’s east side last month. And in a move that looks a lot like Hop Haus’ play in Fitchburg, Eagle Park Brewing is building a big new production brewery-restaurant-event space in Muskego to supplement its current Milwaukee brewery. Minnesota’s Indeed Brewing also plans to open a taproom in Milwaukee next month.

Pabst Brewing Co.’s newest beer, a more serious plunge into the craft sector, comes in a beautiful can, its matte midnight blue adorned with, …

Magic Dragon is a double IPA from Hop Haus Brewing in Verona, which is planning to build a larger brewery in Fitchburg.