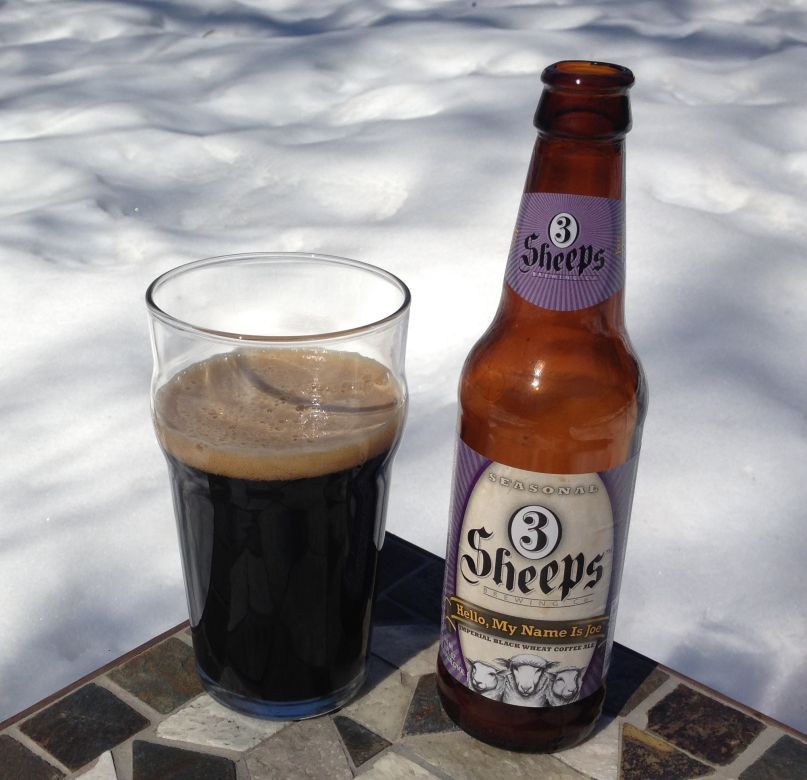 Hello, My Name Is Joe is a dark wheat ale brewed with coffee by 3 Sheeps Brewing of Sheboygan. It's a 9 seed in this year's Beer Bracket. 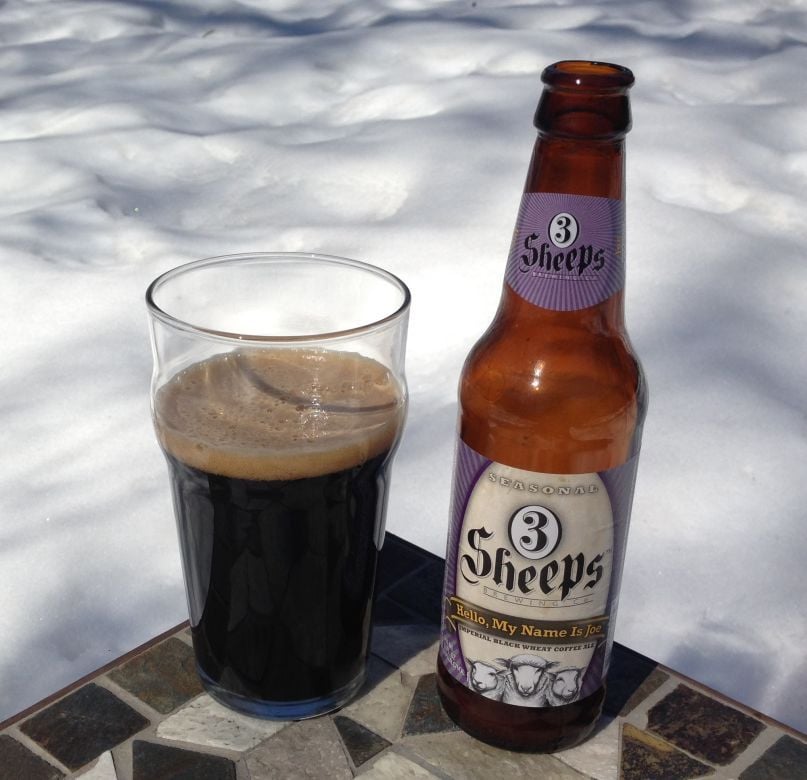 This is the start of the annual March Madnessesque tournament in which you, dear reader, help bestow the title of Wisconsin’s favorite beer. And I’m happy to report that for the first time, the bracket results will appear in the State Journal, in the Taste section each week until the winner is announced April 8.

The Beer Bracket — vote in the first round now at go.madison.com/beerbracket — has evolved plenty in its four years, but this year’s tournament mostly just injects a new foamy field into last year’s format, the first to feature only Wisconsin beers. Round by round, you’ll winnow the 64 beers to one.

The field is meant to be representative of the state’s beer scene at large, though the selection committee (yours truly) acknowledges a modest Madison-area bias. Past champions — last year’s New Glarus Spotted Cow, as well as Ale Asylum’s Hopalicious (2012) and Ballistic (2013) — remain ineligible. Breweries that package their beer for home consumption are favored, though all well-established Madison-area brewpubs are represented.

Each of the top seeds has intriguing story lines. Can O’so Night Train, a Final Four beer every year the Beer Bracket has existed, finally get over the hump? Can Bedlam return Ale Asylum to the throne it claimed in the bracket’s first two years? Can Lakefront Riverwest Stein be the malty lager that breaks into the ales-and-hops club that is the Final Four? Will Moon Man, a 2014 No. 2 seed replacing the 2014 champion Spotted Cow as New Glarus’ top seed, make it two in a row for Wisconsin’s most popular craft brewery?

The red-hot launch of Karben4 Fantasy Factory in bottles moved it up to a 2 seed from last year’s 3, but it couldn’t quite persuade the committee to put it atop a region.

There are a handful of production breweries in the field — Green Bay’s Titletown, Stillmank and Badger State and Milwaukee’s Brenner — that don’t yet sell bottles and cans in the Madison area. Brenner, which was named Wisconsin’s top-rated new brewery last year by RateBeer, is among eight breweries who have increased their buzz or bottle shop presence in the past year enough to warrant inclusion in the 2015 bracket.

That’s an impressive number of new faces, reflecting both the constantly changing selection in the state’s bottle shops and also the “long tail” of Wisconsin beer.

The field didn’t increase in size, so the committee limited the number of beers from the same brewery and weeded out the last of the macrobrews, long reviled by Beer Bracket voters.

That last brewery, which again has a 2 seed in its Really Cool Waterslides IPA, was in danger of losing a second entry, but the committee was too enamored of this week’s beer, a recently released seasonal, to exclude it from the bracket.

Hello, My Name Is Joe

Style: It doesn’t fit neatly into a well known style, but the closest is the American dark wheat ale, though this one is also brewed with coffee.

What it’s like: A bigger, baaader version of 3 Sheeps’ year-round Baaad Boy black wheat, with a shot of mocha.

Where, how much: The price is right for 3 Sheeps’ beer; four-packs of their seasonal releases usually can be found for $8-$9 at better bottle shops. Hello, My Name Is Joe debuted in late February this year; supplies should last through spring.

The beer: Hello, Joe, you pour a rich black with a strong coffee aroma and more subtle notes of wheat underneath. With a sip, Joe reveals a cohesive mélange of coffee and dark chocolate flavors with a little caramel sweetness. The wheat softens the smooth, medium-full body somewhat, while the Sumatran blend of Colectivo Coffee provides some contrasting bitter sharpness on the front of the palate. Overall it drinks much smoother and perhaps a touch sweeter than most coffee stouts, which is an obvious comparison as a coffee-infused black beer.

Booze factor: The label says imperial, and while that’s accurate, the 8 percent ABV is not outlandishly boozy.

The buzz: I like 3 Sheeps for its chase-your-dreams backstory — founder Grant Pauly left his family’s concrete business in 2012 to make his homebrewing hobby a career — but I like its beer better. Really Cool Waterslides remains in my regular IPA rotation — high praise considering how many very good ones are on Wisconsin shelves these days — and each 3 Sheeps seasonal always finds its way to my fridge.

The off-the-wall Nimble Lips, Noble Tongue bomber series has been a little uneven, but the beer world is a better place when breweries try things like sour ales, IPAs made with squid ink and ghost pepper imperial IPAs. The most recent Nimble Lips, Noble Tongue beer was a very limited variant of Hello, My Name Is Joe that was even bigger (10 percent ABV) and barrel-aged. Rest assured I’ll be snapping up that bottle if I ever see it.

Central Waters seasonal IPAs: Returning are Lac Du Bay IPA, with an English take on the style, 7.2% ABV; and Illumination, an awesome imperial at 10% ABV. Both in six-packs of 12-ounce bottles.

Great Lakes Chillwave: One of my favorite beers of all time, a dank but Juicy Fruit-sweet imperial IPA, returns. 9.4% ABV, four-packs of 12-ounce bottles.

House of Brews Adobe: The Madison brewery’s first IPA is hopped with Amarillo, and big, at 7.6% ABV. 22-ounce bombers.

New Lake Louie: The Twins, an 8%-plus ABV maibock from the Arena brewery, is expected to hit shelves Monday. Four-packs.

Oskar Blues Pinner: If you get the marijuana reference in the name of this new session IPA you might have guessed it’s from Colorado. 4.9% ABV, six-packs of cans.

Beer Baron: The Beer Bracket's down to the Sweet 16, too

The East Side brewery's IPA rides healthy buzz -- and a fire-breathing unicorn -- to the Wisconsin beer championship.

The stout is believed to be the first Wisconsin-made bottled beer to use smooth, soft nitrogen bubbles instead of carbonation.

Beers with the Baron, Vol. 17: Beer Bracket, 3 Sheeps Hello, My Name Is Joe

The Beer Baron talks Beer Bracket and reviews a 9 seed in the annual March Madness beer smackdown, a dark wheat ale brewed with coffee from Sh…

Quiz: Guess what's in that beer

Beer Baron: The Beer Bracket returns, with a new line in the sand

The third iteration of the March Madness-style beer throwdown includes only Wisconsin beers in its field of 64.

This year the online contest to crown the state's favorite beer casts a wider net with 64 breweries, each with only one beer.

Hello, My Name Is Joe is a dark wheat ale brewed with coffee by 3 Sheeps Brewing of Sheboygan. It's a 9 seed in this year's Beer Bracket.