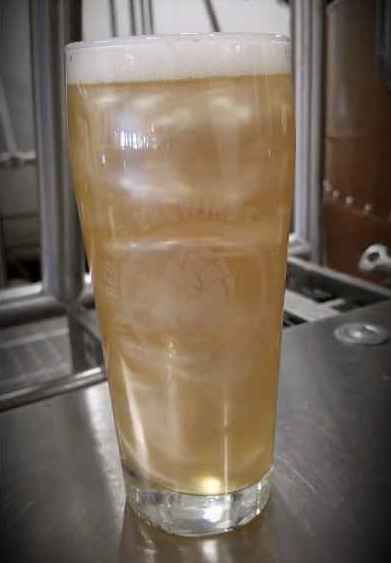 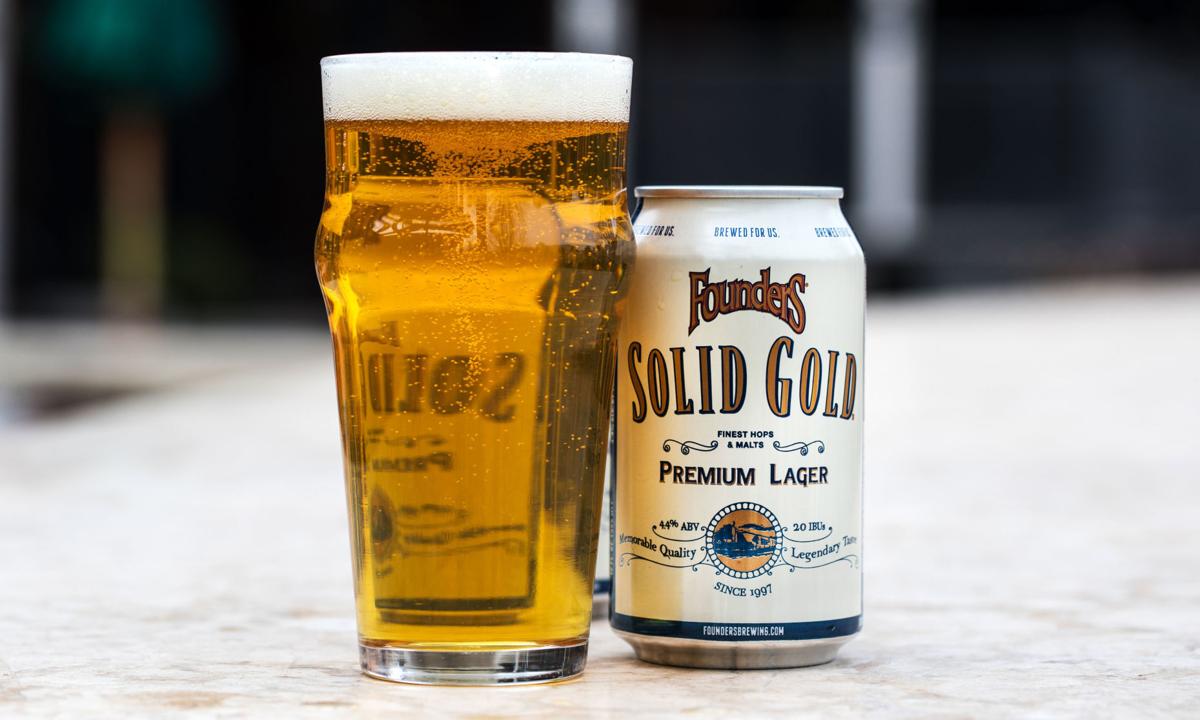 Founders wrapped its lager for the masses in a plain, straightforward label clearly evoking the trappings of such beers decades ago.

CHRIS DROSNER For the State Journal

Q: Sparkle beer: Is it real? How is it possible? — Will, via Facebook

A: Yes, glitter beer is real, and it’s fabulous.

Wausau brewpub Red Eye Brewing posted a video to Facebook on Thursday that quickly went viral: a tall glass of freshly poured pale beer, shimmering with a turbid, lazily rotating opalescence. It looked like a space probe fly-by of the clouds of Saturn, in a glass. The post was teasing “the craziest beer ever released here in Wausau.”

Glitter beer has become the “what will they think of next?” beer story of this spring, part of the larger trend of sparkly foods from doughnuts to pizza and cupcakes. Many news outlets have run stories of local breweries jumping into the fad.

Red Eye owner and brewmaster Kevin Eichelberger saw one of those reports — “a really small blurb,” as he recalls it — but regarded the idea with a curmudgeonly eye.

“For 23 years or so I’ve been brewing on the craft side of it, so I don’t really get too excited about gimmicky things,” he said. But that changed once he saw a glitter beer. “It was so visual.”

When Red Eye’s malt supplier mentioned last week a new edible glitter was in stock, Eichelberger jumped at the chance, and two days later the video of the swirling, sparkling kölsch hit Facebook.

“We just jumped on this whole thing and I thought, if nothing else, let’s get crazy,” he said.

Eichelberger said the German-made glitter he’s using does not affect flavor. It contains titanium dioxide — a very white compound that’s used as a pigment in paint and sunscreen — and tiny flakes of mica, a pearlescent mineral that’s the same stuff found in kids’ craft projects and teenagers’ hair.

All of that sounds not super great to put in your body, but if the federal Food and Drug Administration says it’s safe (it does), let’s have a glitter beer party! (Really, though, titanium dioxide is commonly used as a food coloring, and mica flakes have been in toothpaste for years.)

The glitter is added to the keg, rather than during the brewing process, and it takes only about a gram of the stuff per gallon to get a robust sparkle. He was playing around with the new acquisition and for the video did some math to add the right amount to a single glass of stand-in beer, which he gently stirred for effect.

“This stuff is incredibly shimmery,” he said. “It’s so fine. It stayed in suspension for easily over an hour.”

Though he teased it Thursday, Eichelberger didn’t brew the beer — Hop Mess, a Mosaic-hopped pale ale with lactose and grapefruit extract — until the next day. It’s planned for a April 24 release, for which he expects a full house.

At least one Wisconsin brewery, even farther up north, has gotten in on the glitter game.

Glitter beer has incited many eye rolls and much hand-wringing from purists, especially on beer Twitter. But appearance has always been a part of beer evaluation, and rather serious beer writer Jeff Alworth noted on his “Beervana” podcast that glitter allows a drinker to follow the usually hidden convection cycle of a beer as it is agitated while pouring and drinking.

At Red Eye, which will mark its 10th anniversary next year, those little sparkly mica flakes are boosting the profile of a brewery with a strong reputation for classic styles and an occasional off-the-wall creation. But this is the weirdest thing he’s done in his 24 years in beer.

“We’re just having fun with it,” Eichelberger said. “As long as it keeps people engaged.”

Q: Do you think extreme beers (like sours, intense IPAs, stouts with odd adjuncts) are a temporary fad or here to stay? — @greglovell2

Before glitter, bold flavors (and aromas) have been the bedrock of just about every fad in craft beer since it started having fads: India pale ales and all their colorized variants, imperial everything, fruited and spiced everything, barrel aging, session IPAs, the rise of sours, double dry-hopping.

But one recent trend that’s kicked into high gear this spring has zagged against that zig: An emphasis on drinkability. In the years I’ve been writing this column, I’ve heard from brewer after brewer that they prefer to kick back with lighter, more refreshing beers like pilsner or kölsch after cleaning kegs or crunching the numbers on a recipe.

And in the past two or three years, many of their employers have been adding those beers to their lineups, either year-round or seasonally.

Relatively speaking, Wisconsin breweries already had quite a lot of lagers in their year-round lineups, but a new pilsner parade has joined those portfolios since the start of 2017: 3 Sheeps Pils, Good City Pils, Ale Asylum 12 oz. Curl.

And earlier this spring Lakefront Brewery rolled out Eazy Teazy, a breezy blonde ale with green tea that differentiates itself on the craft shelf by openly advertising its calorie count — 99, just a few more than a Miller Lite — right on the can. It’s pretty good, too: light and quenching, with a nice meeting of citrus and herbal character.

If a craft light beer is borrowing from big beer’s playbook, another new trend steals it entirely: the craft adjunct lager. This is the corn- or rice-diluted style of Budweiser, High Life, PBR and so many other macro beers and their homogenous forebears that turned generations of people off of beer. So, “going there” is an interesting play in an industry sector that has built itself on differentiating from that.

The first one of these beers that caught my attention was Surly’s #Merica, which launched in cans in 2016. A handful of small brewers who sell in Wisconsin have dabbled in the style since then, including Odd Side Ales’ nicely named Beer Me.

But Founders Brewing’s rollout of Solid Gold this spring ups the ante by bringing the trend nearly national. Founders wrapped its lager for the masses in a plain, straightforward label clearly evoking the trappings of such beers decades ago. It comes in Founders’ 15-pack and at a pretty comfortable price point of a buck a can.

And, as far as these beers go, Solid Gold hits the mark: smooth, easy and drinkable. The aroma is more inviting than you find from the true macro lagers, and while it does have corn in the grain bill, it’s invisible to the palate, as it should be, rather than the Corn Pops-like sweetness that comes about when this style fails. Another pitfall — funky-sock hop character — is also avoided with a gentle, clean bitterness on the finish that’s enough for balance but not sharp enough to put off anyone who likes this kind of beer.

All of this is to say, Greg, that easy styles are ascendant.

But about that second yes, bold flavors are definitely here to stay. Flavor, the bigger the better, has been the guiding star of craft beer since it began. The ratio of bold flavors to more balanced and drinkable beers may be correcting itself right now, but there’ll always be a place for a beer like T-Rex, a barrel-aged imperial IPA with juniper and sage that Rockhound Brewing rolled out for its two-year anniversary last week.

Q: Is @raisedgrain gonna expand distro and get up to central Wisconsin? — @YaLeszczynski

A: It’s an apropos question because Raised Grain Brewing, founded by two doctors in 2015 in Waukesha, began brewing at a new 20,000-square-foot facility across town. That new brewery features enough space and stainless steel to produce about 11,000 barrels — some 10 times its previous capacity — plus a canning line.

Things are humming along, said co-owner Nick Reistad, but Raised Grain is taking a cautious approach to expansion. “We need to make sure we have everything, from production to distribution, in order before we start expanding outward,” he said.

Reistad suggested Madison would be the first new market outside Milwaukee, perhaps as early as this fall.

“Central Wisconsin is interesting, too. We love that part of the state and visit there often,” he said. “It comes back to quality, so as soon as we feel we can maintain everything from production through sales, we’ll jump on it.”

Q: Should you trust a beer critic who enjoys shandies? — Scott, via Facebook

A: Hey, you do you, Scott. But, shandy hater, you should look yourself in the mirror and ask, why do I have such animus for something as simple and delicious as lemonade and beer together?

When it’s hot and you’re out on the water or out in the woods or other drinking-all-day occasions, shandies hit the spot. For me. You can have your imperial IPA if you must, Scott.

It’s another good year for shandy, with two new ones from local breweries.

Potosi Brewing, which already offers the nice-but-sweet Steamboat Shandy, rolled out Riverside Radler, which imposes grapefruit on a hefeweizen base.

And Wisconsin Brewing, via its UW-Madison offshoot Campus Craft Brewery, has debuted Re: Fresh Radler, a blend of grapefruit soda and light lager. This is the same low-ABV formula that has made Austrian-made Stiegl Radler a deserving smash hit here in the states, so I’ll be looking for Re: Fresh when the mercury rises or I’m sweaty for some other reason.

New is great, but the Leinie’s shandies always land in a comfortable place on the price point-tastiness-drinkability triangle. Those bigger variety packs are nice for weekends, too, even though I wish they’d just acknowledge Grapefruit Shandy is their best shandy and make a 12-pack of half that and half Summer Shandy.

A well-known East Side restaurateur has been under siege by hostile online comments and reviews after an email he sent to a former employee was made public.

Beer Baron: Josh Noel on his new book, Goose Island, and 'selling out' in the craft beer world

Josh Noel has had a front-row seat to the Goose Island story and and tells it, unvarnished, in his new book, "Barrel-Aged Stout and Selling Out." He's been a reporter with the Chicago Tribune since 2005 and has covered the beer industry and culture since 2009.

Founders wrapped its lager for the masses in a plain, straightforward label clearly evoking the trappings of such beers decades ago.