Steenbock’s on Orchard is done in earth tones and features a wall of windows; a long, green-and-brown striped banquette; place mats instead of linen; well-placed gardenias; and small candles. A mirror on the wall gives the illusion of the room being twice as large. 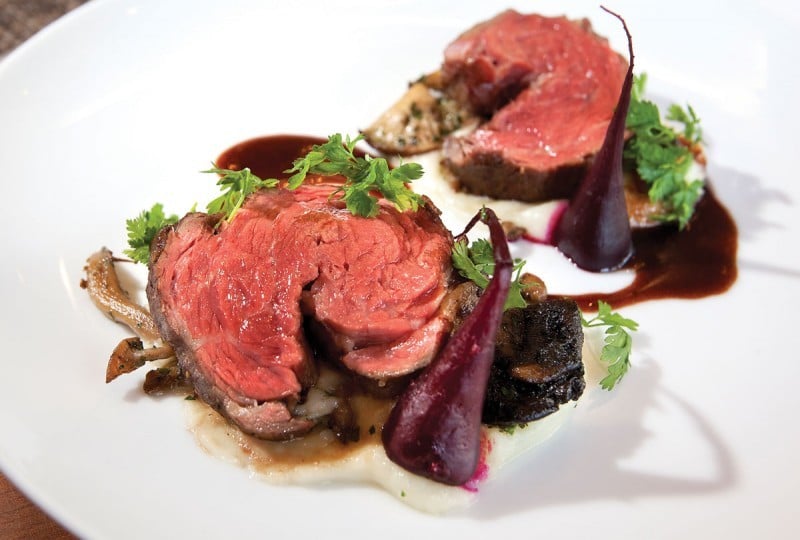 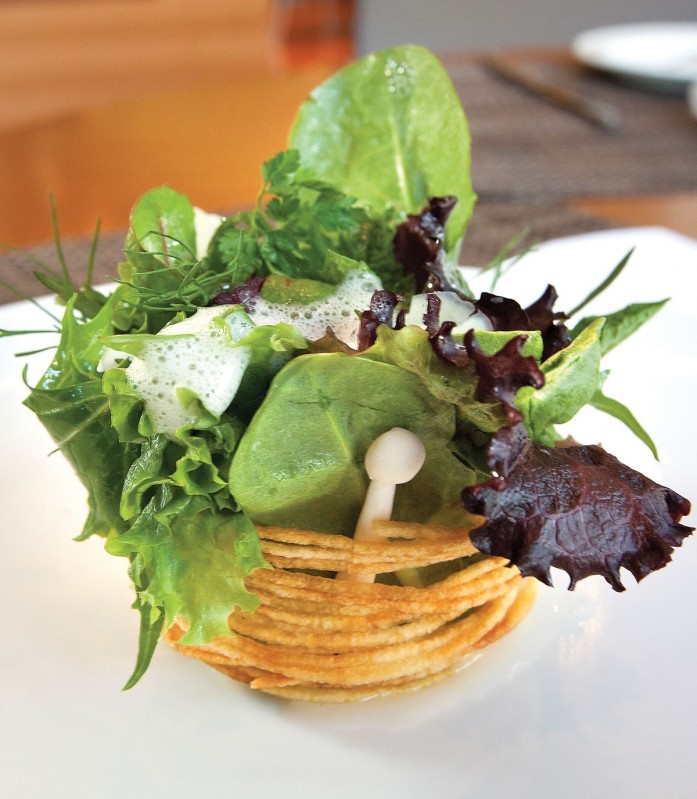 The organic greens salad had a playful ring around it, woven together from fried potatoes. The lettuces are assembled with a tweezers.
SAMARA KALK DERBY | Wisconsin State Journal |

Steenbock’s on Orchard, the high-end Food Fight restaurant inside the new $210 million Wisconsin Institutes for Discovery building on the UW-Madison campus, is nearly as world class as the facility itself.

Named for the late UW-Madison biochemistry professor Harry Steenbock, the restaurant is most similar to Food Fight’s other upscale restaurant, Fresco, which is tucked into another magnificent building — the Madison Museum of Contemporary Art. Steenbock’s is also every bit as good as Fresco — and that’s saying a lot.

Often, the public flocks to check out the latest restaurant, but when we visited Steenbock’s on a Wednesday night during its first full week of business — it had gone through a series of mock runs already — we were the lonely table in the room. This meant the full attention of our extremely knowledgeable waiter, who explained the menu in gratuitous detail.

The modern, sustainable space is almost zen-like. It’s done in earth tones and features a wall of windows; a long, green-and-brown striped banquette; place mats instead of linen; well-placed gardenias; and small candles. The eclectic soundtrack ranged from Sinatra to Jobim and light, trippy techno.

The locavore menu, crafted by talented executive chef Michael Pruett, who spent two years at Johnny Delmonico’s and did a stint catering for Wolfgang Puck in Los Angeles, is short and to the point. There are seven first courses, eight second courses — including three seafood offerings and one vegetarian — and five desserts.

An intriguing amuse bouche was ratatouille in micro form: minced zucchini, eggplant and squash mixed with pesto, on a dime-sized, crisp brioche. It was so small it was hard to get a read on. If only it had been silver dollar-sized.

The day’s seasonal soup ($7), a rich potato leek, was served in dramatic fashion. A few little morsels of sweet potato and potato croquette came in a bowl and our waiter poured the soup over it table-side.

The creative organic greens salad ($6) had a playful ring around it, woven together from fried potatoes. Tomato jam made with white wine and sugar gave it a hint of sweetness, while raw beach mushrooms made it look like a small forest. The assorted greens were assembled with a tweezers, our waiter told us. A lemon vinaigrette and farmstead cheese made it burst with flavor.

We were offered three types of bread, all of which were excellent: a crusty sourdough, an olive bread, and a multigrain. Meanwhile, the water was flavored with lemon and orange, a nice touch.

The sole pasta dish, strozzapreti ($16), was a knockout, featuring hand-rolled penne pasta cooked aggressively al dente topped with Fountain Prairie Farms Scottish Highland beef short ribs in a phenomenal ragout, made with a red wine reduction. The meat was braised for 36 hours and served in its braising liquid. A cream sauce made with enoki mushrooms mingled with the ragout. Gran queso cheese was grated over it.

I’m not much for duck, but my companion simply gushed about his Au Bon Canard duck breast ($25) that was prepared “sous vide” or “under vacuum,” a method of cooking where food is sealed in airtight plastic bags and submerged in water.

The duck was served with a sensational foie gras sauce that was, again, poured table-side. The thick slices of meat were too tough for me, but I adored the carrot ginger puree and the generous helping of melt-in-your-mouth duck confit underneath. The small, roasted carrots that came alongside were not surprisingly al dente.

The s’more ($7) on the dessert menu was a deconstructed, whimsical child’s treat with a long rectangle of homemade marshmallow, crumbles of brownie and graham cracker and a smear of chocolate “paint.” Just make sure not to eat the barbecued wood chip that Pruett calls “campfire on a plate.”

“This is one of the best meals I’ve ever eaten in a Madison restaurant — or anywhere for that matter,” said my dining companion, whose job has taken him to countries across the globe. Pruett, he said, deserves the biggest audience in Madison.

Hopefully word will spread soon and you won’t be there eating by your lonesome.

Steenbock’s on Orchard is done in earth tones and features a wall of windows; a long, green-and-brown striped banquette; place mats instead of linen; well-placed gardenias; and small candles. A mirror on the wall gives the illusion of the room being twice as large.

The organic greens salad had a playful ring around it, woven together from fried potatoes. The lettuces are assembled with a tweezers.
© Copyright 2021 Capital Newspapers Inc., madison.com , 1901 Fish Hatchery Rd Madison, WI | Terms of Use | Privacy Policy
Powered by BLOX Content Management System from TownNews.com.
You don't have any notifications.