The Madison Children’s Museum, closed since mid-March due to the pandemic, has laid out a plan for its future, and it centers on outdoor play.

The initiative, “Our Future in Play: a promise to survive, thrive, and play outside,” includes the creation of a 10,000-square-foot play space behind the museum in what was a parking lot.

A fundraising campaign to raise $4 million by June 30 is halfway to its goal, thanks in part to a $1 million lead gift last month from philanthropist Jerry Frautschi.

It was a $5 million building purchase from Frautschi that secured a permanent home for the Madison Children’s Museum at 100 N. Hamilton St. The museum opened in its present location in 2010.

Deb Gilpin, the museum’s president and CEO, said she’s been keeping Frautschi and other benefactors informed on how the museum will survive its COVID-19 closure. “They deeply care about this organization being there in the future,” she said.

The museum, in its 40th year, is part of what will help heal the city, Gilpin said.

“When kids and families start coming Downtown, that’s going to bring light and activity,” she said. “A vibrant downtown has children. There’s data all over the country about that point. So, we will be part of that solution.”

Frautschi donated $205 million for the creation of the Overture Center, and in his original vision, the museum would have been in that building. But, Gilpin said, when the number of resident companies became too large, Frautschi said: “Find a building that’s in the heart of the city and I’ll get it for you because I want children in the heart of the city.”

Before COVID-19 struck, Gilpin said the museum was developing a large-scale outdoor project on the property that has been vacant for about seven years. Physical play is good, not just for young bodies but for developing social skills, she said.

“We’d also identified how much (children) aren’t getting that kind of time and how important free play is to all different kinds of skills, development, taking risks and critical thinking,” she said.

Because outdoor activities are safer than indoor ones during the pandemic, Gilpin said museum officials knew they needed to move up the project’s timeline. The outdoor play area will be geared toward the same age group the museum serves: birth through 12.

Gilpin said it will cost about $1 million to demolish the deteriorating, non-functional parking area. The museum’s loading dock below will be rebuilt and provide some protection from the elements.

The museum’s authentic mid-19th century log cabin from nearby Walworth County will be temporarily lifted out and replaced.

Gilpin hopes to have the play area ready by late May or early June. She said demolition should begin in February after the museum gets the city permits.

The project will be documented with time-lapse photography. Gilpin said it will be particularly fun for children to watch big machines chop up the concrete deck, and likened it to the video game Pac-Man.

The cabin will be lifted onto a flatbed truck and taken to a storage area that’s been donated to the museum for six months. Gilpin said she can picture children coming out to watch the cabin going down the road.

Museum spokesman Jonathan Zarov said the museum’s former two-level, 47-space lot at East Dayton and North Hamilton streets was never easy to use because of its triangular shape.

“You were always turning in and out awkwardly with other cars,” he said, adding that most museum visitors didn’t park there. No museums Downtown have their own parking, he noted.

In 2014, museum management determined that the cost to repair the parking area was too great, so they closed the top part of the lot and turned it into a “FunkYard” with inexpensive recycled materials such as pallets and cable spools. It had a stage, bicycles, tricycles and unusual wheel devices.

“It didn’t cost much to make, and it was really popular,” Zarov said. “So that gave us the idea that the spot could be used for kids to have better places, more places, for safe, outdoor, active play and for taking risks.”

Zarov said that museum staff are still brainstorming names for the new area.

With the museum closed, staff have been trying to give children an alternative outlet for creative, open-ended play through “MCM at Home” online programs. This month, the theme is “31 Days of Halloween.”

During summer, the museum created hundreds of games, including a chalk-art program. Some of the hopscotch-like boards are still active on Madison sidewalks.

The pandemic has been cruel to museums, with industry experts predicting that one-third will not reopen. Museum officials say the children’s museum will remain closed until sometime in 2021.

Gilpin said that more than half the museum’s annual budget comes from admissions, memberships and programs. That’s about $1.5 million the museum isn’t getting this year.

In mid-March, the museum had its employees take a two-week furlough. After that, layoffs affected 29 people, all of whom received severance. That brought the staff down to 44, with 32 furloughed.

In April, the museum was able to bring all 44 employees back with federal Paycheck Protection Program money. Two months later, when those funds dried up, management was forced to make layoffs and reductions in staff hours.

Gilpin, whose salary and hours were reduced by 25%, said the museum is left with 18 employees, but most are half-time, so it’s the equivalent of nine full-time positions.

Recently, some key employees have stayed busy by working with Dane County Waste & Renewables, which operates the county’s landfills, to create an exhibit.

Popular museum fundraisers such as Wonder Ball have been canceled, but Gilpin said Mallards drive-in movie nights — the second one was on Saturday — have been helpful.

“Even with all the distancing, it was very emotional to have the last one because we got to see kids and their families and they were so excited to see us. We live for that stuff,” Gilpin said.

Madison Children’s Museum was recently awarded a $250,000 grant from the Institute of Museum and Library Services to support the outdoor exhibit area. Diane Ballweg, a longtime local advocate and philanthropist for local youth arts, also gave $250,000 toward the “Our Future in Play” campaign, Gilpin said.

Zarov said museum staff has been thinking about what the world will look like as the pandemic slows. “I think it’s going to take a while before people are returning to indoor spaces with great confidence.”

Until then, he said, there’s a need for more outdoor play.

+27 Autumn splendor: Some of our best fall color photos

Autumn splendor: Some of our best fall color photos

Biking through the arboretum

Laughing at the locks

Food pickups are Wednesdays and Saturdays on Willow Island at the Alliant Energy Center. On Saturdays, customers can also walk up and buy food without ordering in advance.

Know Your Madisonian: Educator builds 145 desks (and counting) for schoolchildren

Jocelyn Lepinski grew up in Stevens Point with a woodworking father, who put a hammer in her hand as soon as she could hold one.

City announces first 5 Public Market vendors, with each getting $19,000

Officials planning the long-awaited Madison Public Market revealed the project’s first five vendors Thursday, and most of them will be familiar to those who follow food carts and restaurants in Madison.

Madison College book club embraces 'How to Be an Antiracist'

Ibram X. Kendi is making a free online appearance at 6:30 p.m. Wednesday as part of the Wisconsin Book Festival.

Dozens of local cultural organizations from Madison Symphony Orchestra to Forward Theater Company to WORT/FM 89.9, are being buoyed by recently-awarded COVID-19 relief funding.

Dairyland getaway: 20 of the coolest Airbnb rentals in Wisconsin

If you're looking to get away from the cramped confines of home for a while, there's no shortage of outside-the-box choices right in our own b…

The 2021-22 Broadway at Overture season, announced to subscribers Thursday night, will also feature six-time Tony Award-winner "Dear Evan Hansen," as well as "Mean Girls" and "Ain't Too Proud — The Life and Times of the Temptations."

The museum, which has been closed for over a year due to the COVID-19 pandemic, will begin a phased reopening in June with new operating procedures in place to keep staff and visitors safe. 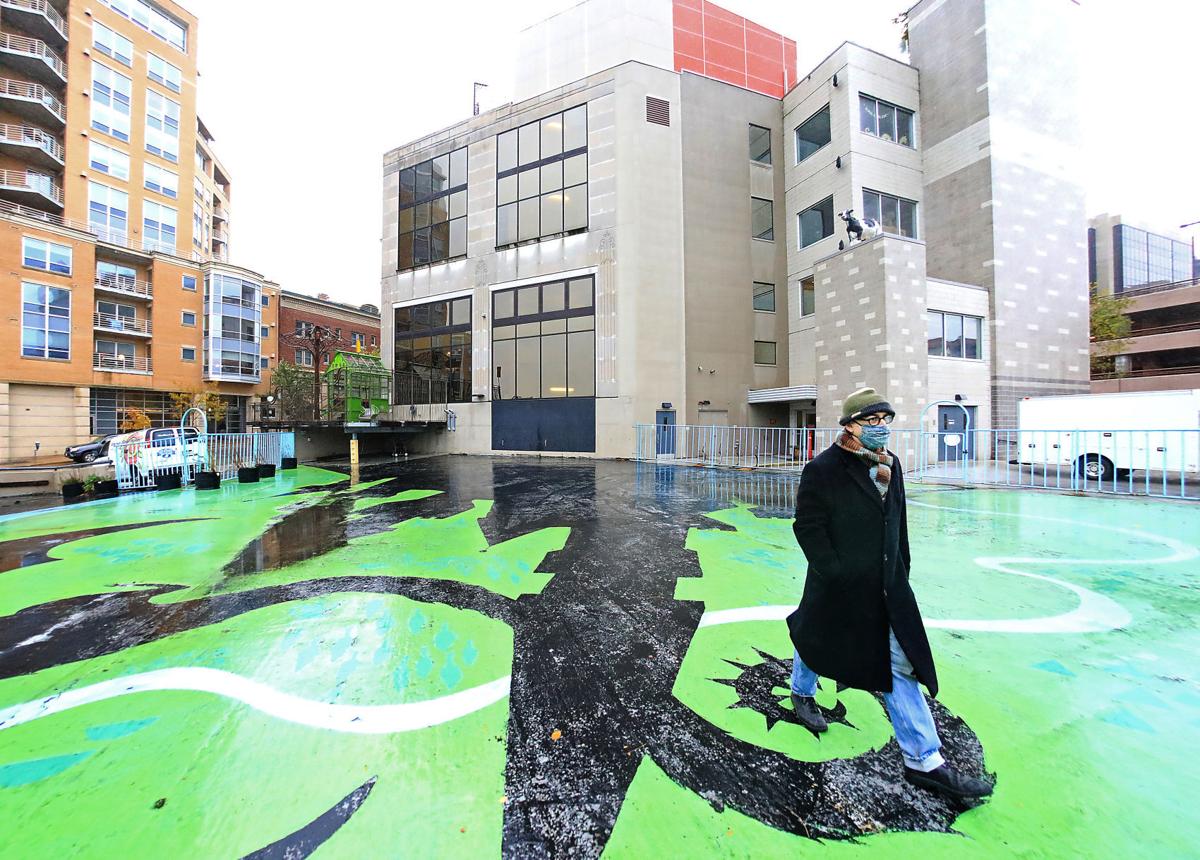 Situated above a deteriorating and unusable parking structure, the backlot of the Madison Children's Museum will be developed into an outdoor exhibit and gathering area as part of a multi-faceted project being planned by the museum. Exploring the space, which currently features a large dragon and castle-themed mural, is Jonathan Zarov, director of marketing and communications for the nonprofit museum. 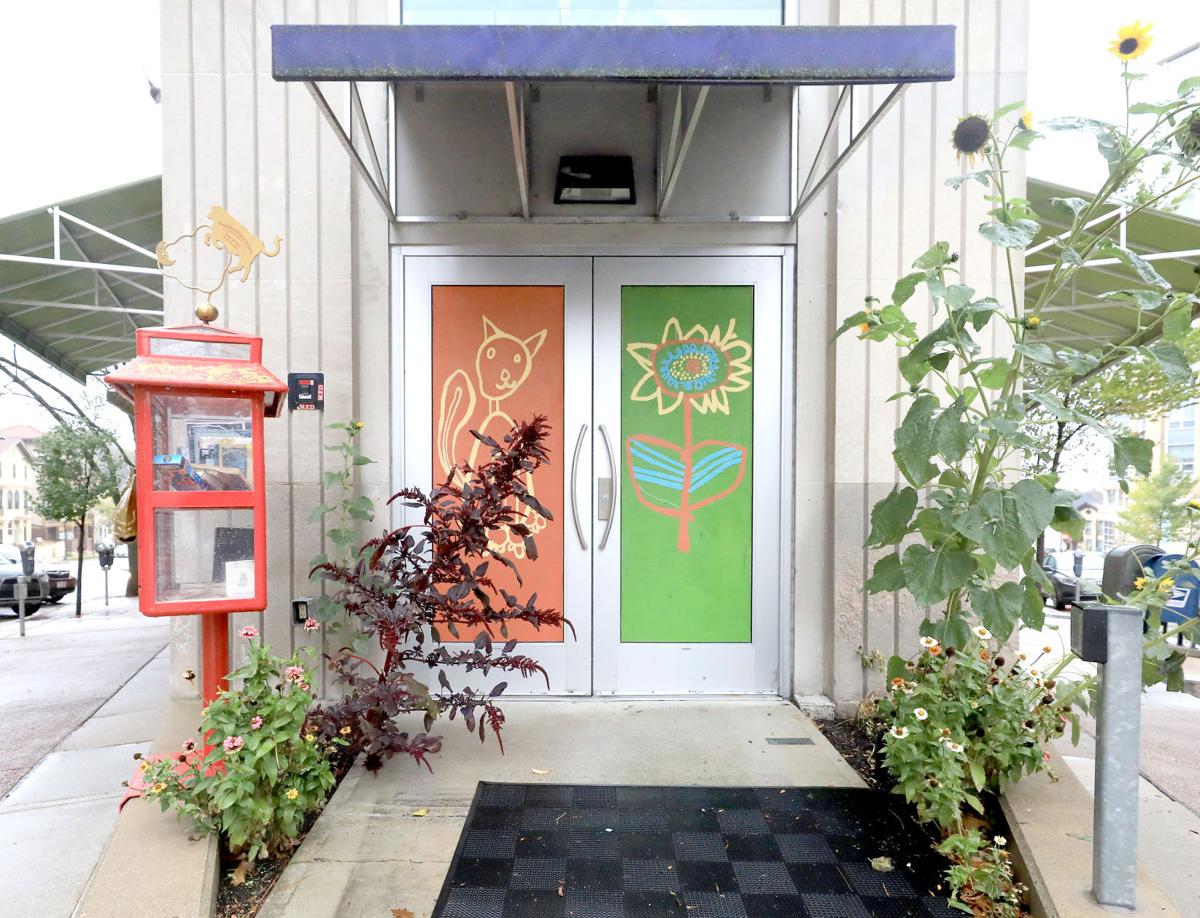 Closed during the ongoing COVID-19 pandemic, decorative boards remain on the front doors and windows of the Madison Children's Museum. 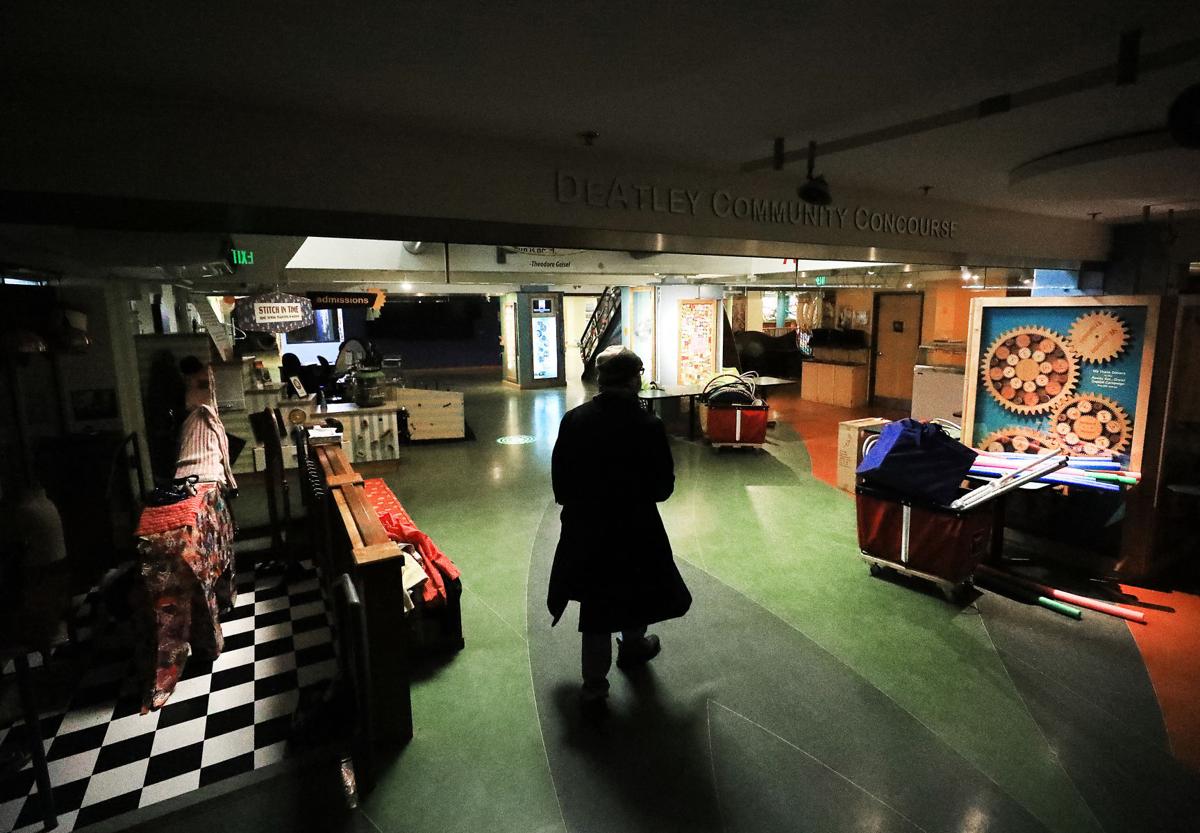 Jonathan Zarov, director of marketing and communications for the Madison Children's Museum, walks through a darkened lobby of the facility Friday. The museum remains closed due to the coronavirus pandemic. 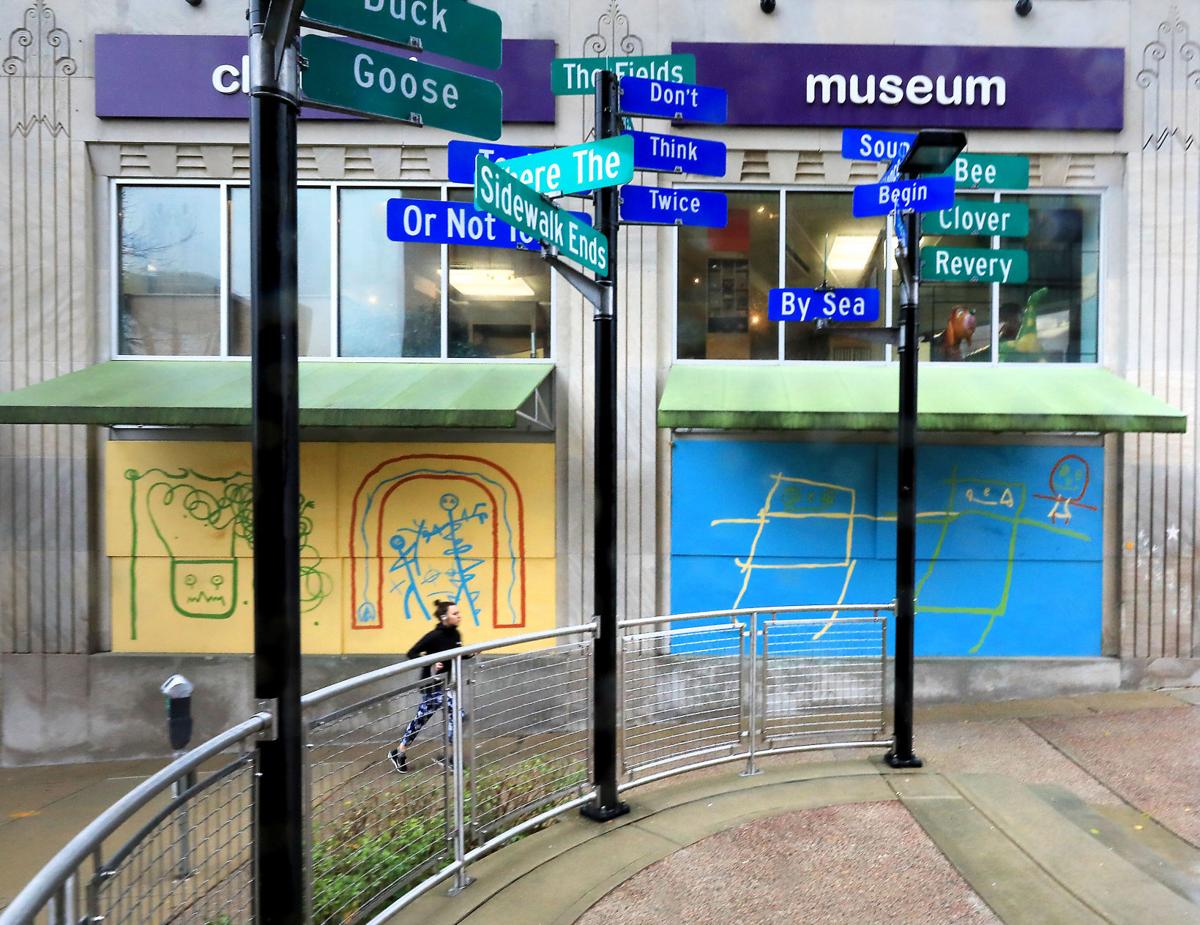 Painted plywood boards over the windows and doors at the Madison Children's Museum remain in place as the museum remains closed due to the COVID-19 pandemic. 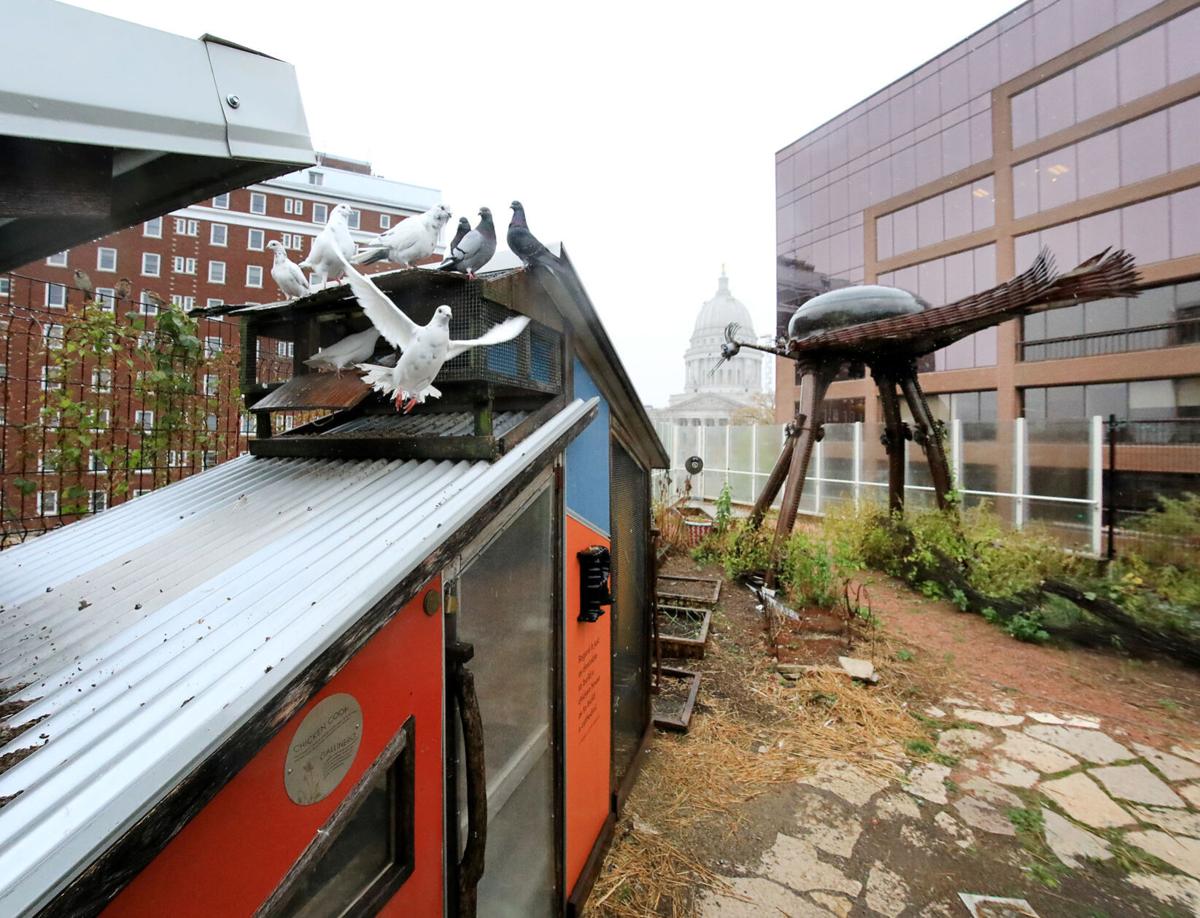 Homing pigeons share a coop on the rooftop of the Madison Children's Museum. The birds are the only remaining regular visitors to the museum. 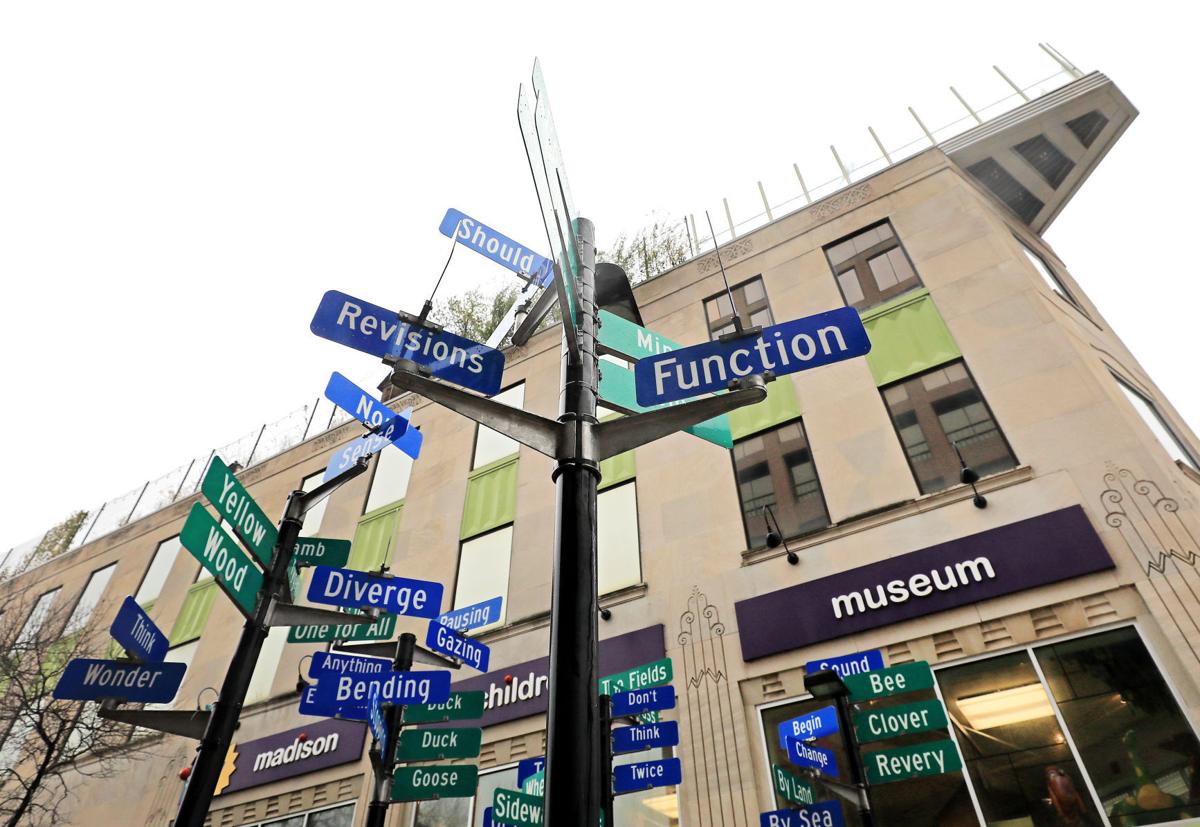 “Roads Diverge," a street sign installation by artists Aaron Stephan and Brenda Baker, is featured outside the Madison Children's Museum. 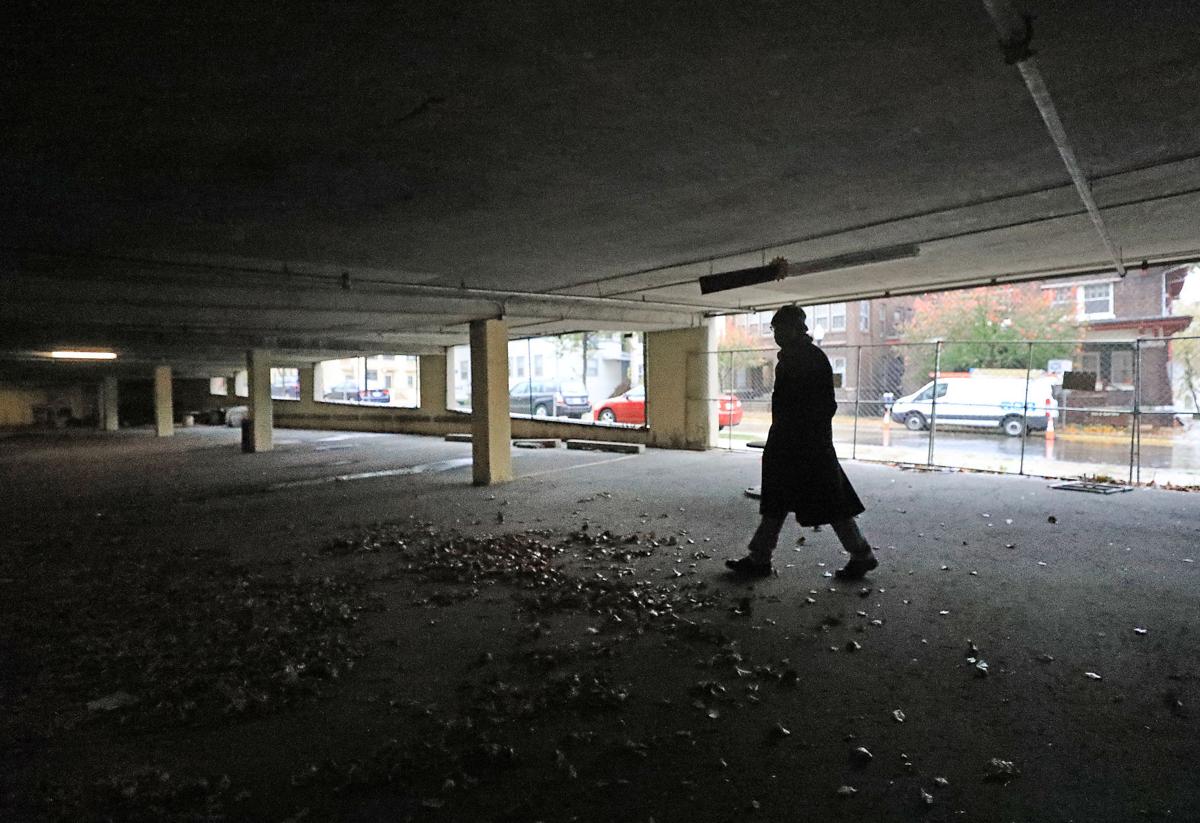 Jonathan Zarov, director of marketing and communications for the Madison Children's Museum, walks through a deteriorating and unused parking ramp below a backlot of the museum.