The prairie just outside the front door of the Lussier Family Heritage Center has a new influx of characters and a few more visitors.

There’s still plenty of room among the stands of milkweed, yellow coneflower and stiff goldenrod for the monarch butterflies, purple martins, ruby-throated hummingbirds, honey bees and the rogue woodchuck.

Only now there’s an “Old Mother Turtle and her little turtle One.” Just a few yards away resides “Old Mother Fish and her little fishes Two.” It’s followed by an owl, mouse, duck, lizard and other creatures along with their spry offspring.

The prairie, part of Lake Farm County Park on Lake Waubesa’s northwest shore, hasn’t been turned into a zoo. Instead, the short trail that winds through the wildflowers here has been melded with literature to create the state’s newest StoryWalk, a path lined with the pages of a children’s book, in this case, “Over in the Meadow” by Jane Cabrera.

The idea, part of the Heritage Center’s Prairie Learning Center and a collaboration with the Monona Public Library, is to get young readers outside and give those that are already in the outdoors a chance to read in a natural environment.

“We wanted to do this so that we could pair up both literacy and get families to come out and experience our parks in a different way,” said Lael Pascual, manager of the Heritage Center. “It’s about engaging with our prairie and learning about the outdoors through different experiences.”

Books along the StoryWalk, which debuted Aug. 16, will be changed on the 15th of each month, displayed year round and rotate in degree of difficulty between those in preschool, elementary and middle school. On Sept. 15, “Black is a Rainbow Color” by Angela Joy will be installed followed by “The Hike” by Alison Farrell on Oct. 15. For now, stories are displayed on yard signs but permanent and more sturdy structures are scheduled to be installed next spring once the ground thaws.

The Friends of Capital Springs Recreation Area group is currently fundraising for the $5,000 project. Donations can be made through their website at www.friendsofcapsprings.org/donate.

And just like every other aspect of life, the project has also been impacted by COVID-19. Only in this case, the project has been accelerated not delayed in an effort to get more people outside during the pandemic.

“Getting temporary postings up for the time being was important to keep encouraging everyone to get outdoors and do something a little bit different,” Pascual said, as she strolled the trail on Tuesday. “So it kind of came together maybe a little bit faster than it ordinarily would have but its just as valuable to have these pages out here.”

The StoryWalk project was conceived in 2007 in Montpelier, Vermont, by Anne Ferguson who at the time was working as a chronic disease prevention specialist and was looking for a way to create a physical activity that could be enjoyed together by parents and their children, since physical activity is a key component to chronic disease prevention. She also wanted the project to be free so she ultimately partnered with her local library and the Vermont Arts Council, which helped fund the project that was set up in a local park. Interest spread and she began receiving requests from state parks, other cities and nature centers. StoryWalks can now be found in all 50 states and in at least 12 other countries.

“I knew I had a great idea, I just didn’t anticipate how well it would be received across the country and beyond,” Ferguson wrote on the Kellogg-Hubbard Library website in 2017 when the program celebrated its 10-year anniversary. “StoryWalk was never designed to be a money-making project. In fact, it is now supported solely by donations from the public. It has always been about promoting early literacy, physical activity, and family time together in nature.”

The number of StoryWalks in Wisconsin is growing. In Mauston, a city of just over 4,400 people and about 78 miles northwest of Madison, the Hatch Public Library in 2018 installed a 16-panel StoryWalk in Riverside Park. The Waupaca Public Library has four StoryWalks along the River Ridge Trail while in the Milwaukee suburb of St. Francis, a temporary StoryWalk was installed along a quarter-mile stretch of the city’s Nojoshing Trail from July 1 to Aug. 10. Another StoryWalk will return in October and there are hopes for a permanent installation with rotating stories by next year, said Jessica Norris, the children’s librarian at the St. Francis Public Library.

“It was definitely a really interesting experience and, I think, a really successful one,” said Norris, who chose “Goldie Locks and the Three Dinosaurs,” for the inaugural StoryWalk book. “All we got back was nothing but really positive responses.”

Dane County Parks have in the past hosted poetry trails at Donald, CamRock, Indian Lake and Prairie Moraine parks but the StoryWalk is a first.

The wooden posts scheduled to be installed next spring will be affixed with signs capable of holding two pages of a book and look similar to prairie restoration signs that dot the 380-acre park, that is part of the 2,500 acre Lewis Nine Springs E-Way and dissected by bike trails.

The trail for the StoryWalk is a loop that could easily be completed in just a few minutes if not for the book and goes through and around a prairie restoration project managed by the Madison Area Master Gardeners Association.

Hannah Olson, who is a nanny for a Cottage Grove family, brought Oliver Fischer, 10, and his two brothers, Gabe, 7, and Wyatt, 6, after their mother read about the project on Facebook. It offered another option during a summer of scuttled activities and events for three energetic youth.

“I liked it. I thought it was cool to incorporate a story into nature,” Olson said. “We’re trying to stay outside.”

[Editor's note: This story has been updated to correct the title of the first book featured on the StoryWalk and the spelling of the author's last name.] 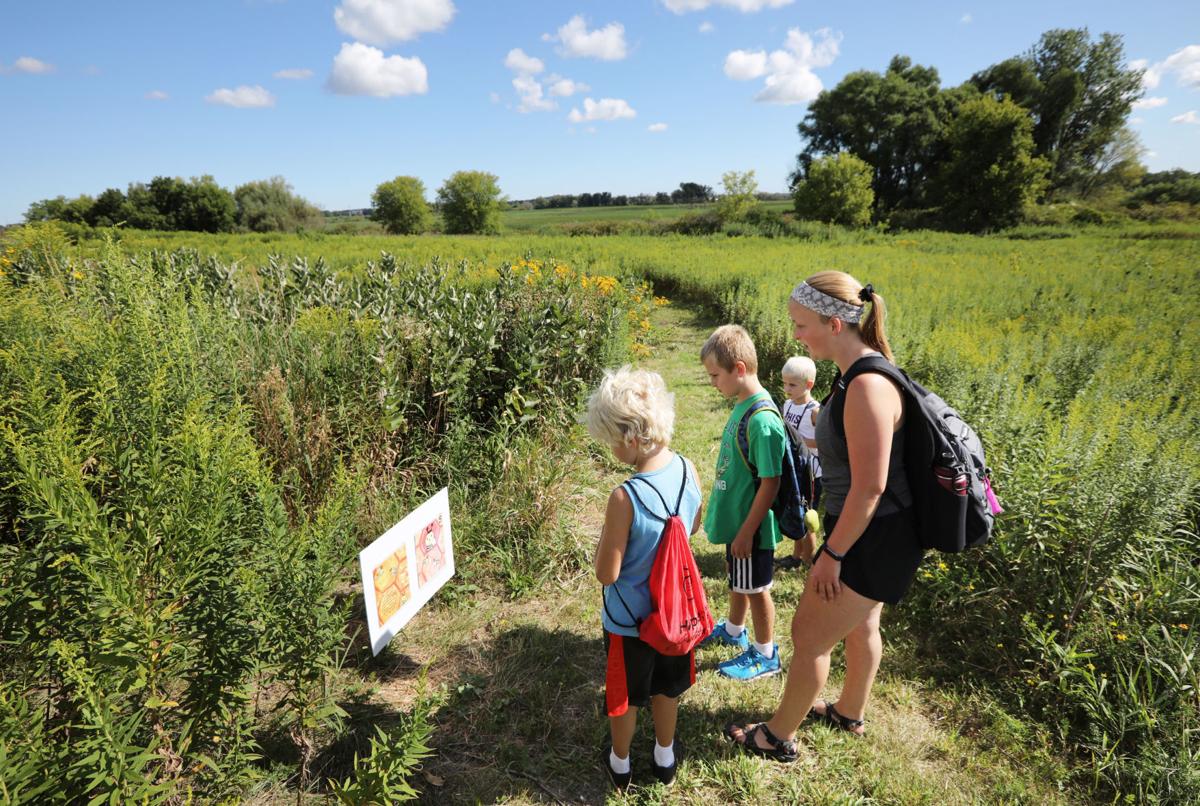 Hannah Olson, right, nanny to brothers, from left, Gabe Fischer, 7, Oliver, 10 and Wyatt, 6, all from Cottage Grove, take in the StoryWalk last week at Lussier Family Heritage Center. The trail, which winds through a restored prairie in Lake Farm County Park, features the children's book "Over in the Meadow" by Jane Cabrera and is posted on yard signs two pages at a time. Permanent structures are planned for next spring but the stories change on the 15th of each month. 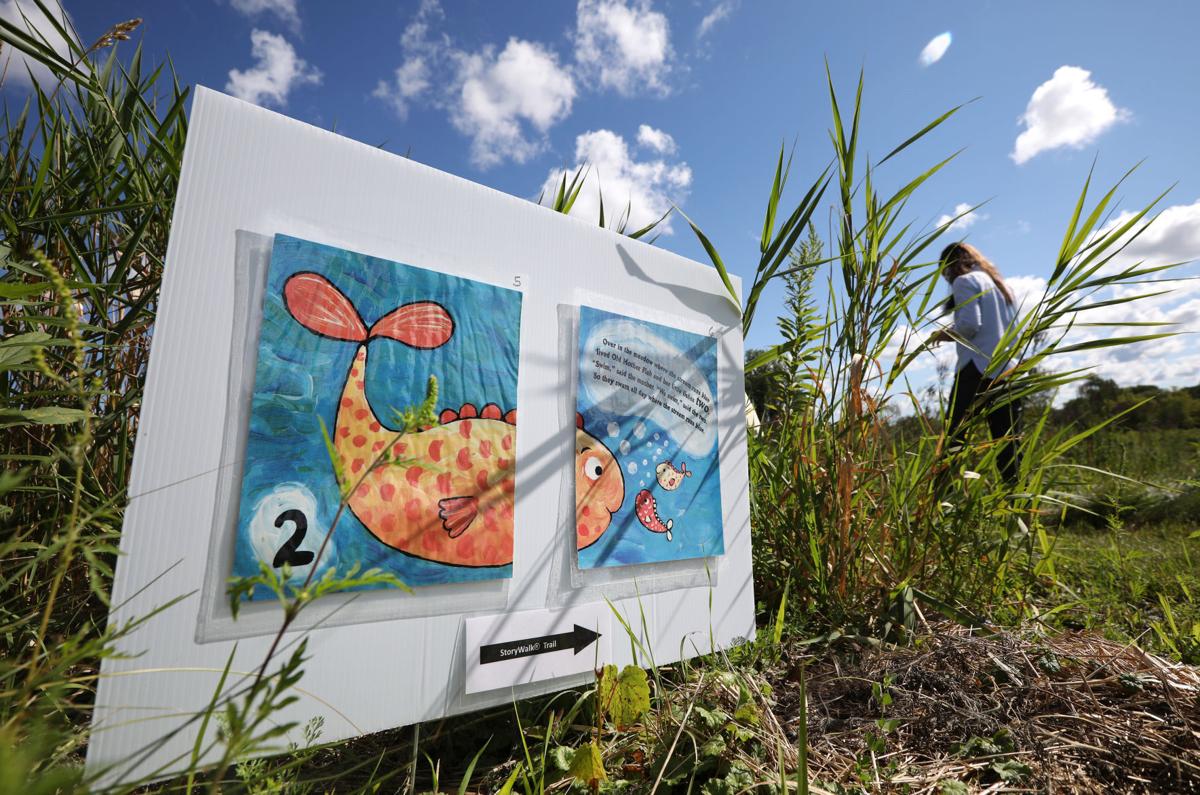 "Over in the Meadow" by Jane Cabrera is the first book featured in the StoryWalk that opened recently outside the Lussier Family Heritage Center at Lake Farm County Park. The StoryWalk project was conceived in 2007 in Montpelier, Vermont, and has now spread to 50 states and at least 12 countries. 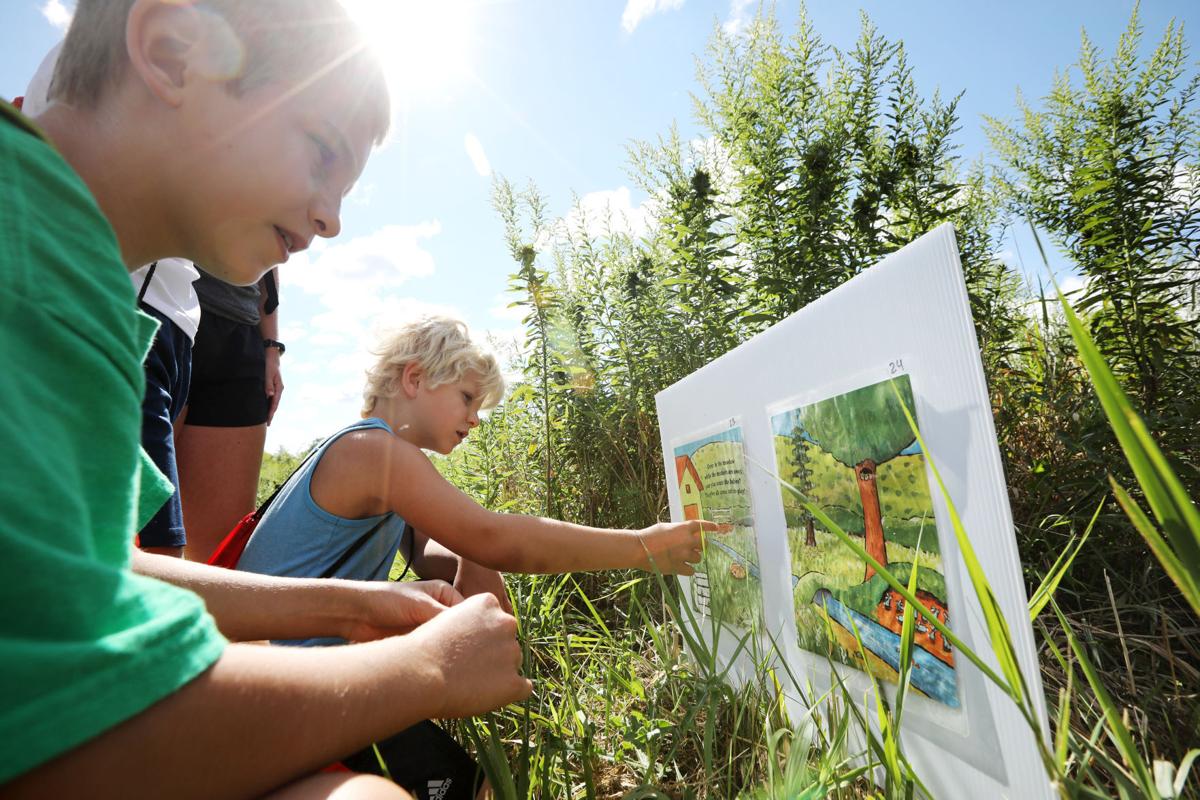 Oliver Fischer, 10, left, and his brother, Gabe, 7, from Cottage Grove, get a close look at one of the pages of the book "Over in the Meadow" by Jane Cabrera that is on display for the StoryWalk outside the Lussier Family Heritage Center at Lake Farm County Park in Madison. The StoryWalk project is a collaboration between the Heritage Center and the Monona Public Library. 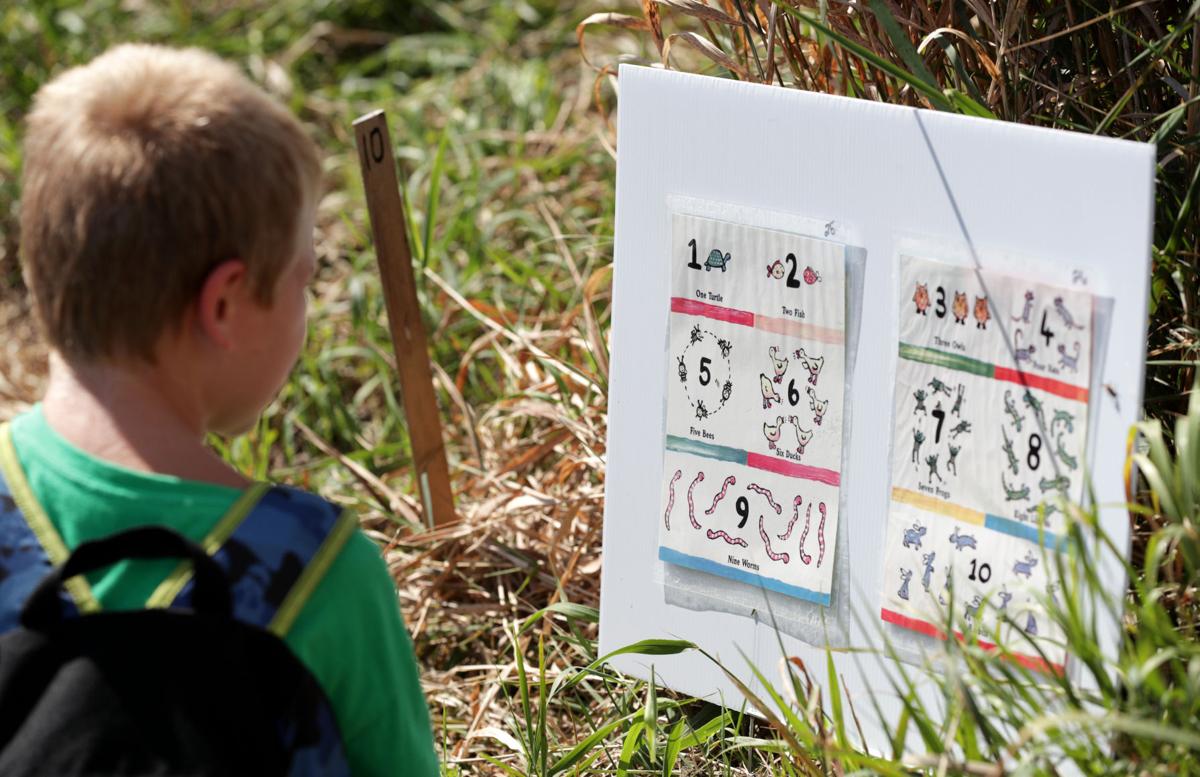 Oliver Fischer, 10, of Cottage Grove, looks at some of the last pages of "Over in the Meadow" by Jane Cabrera that is part of the StoryWalk at Lake Farm County Park. 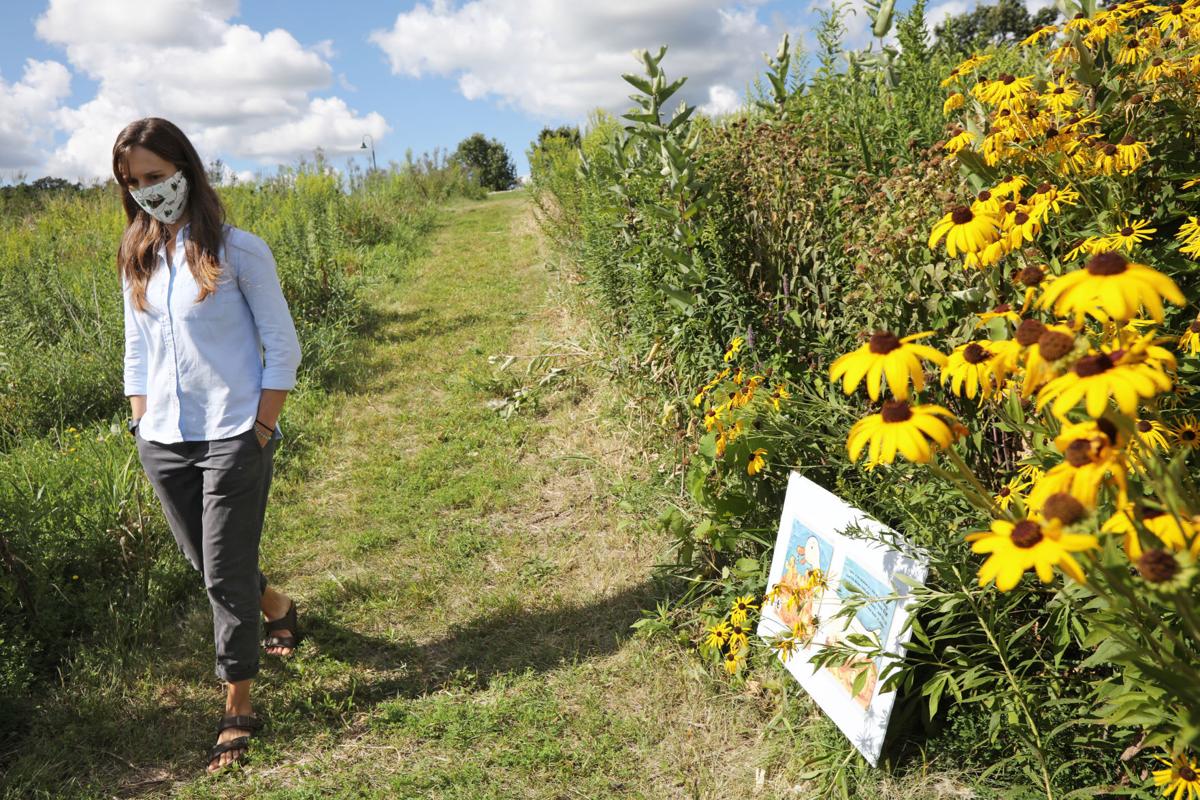 Lael Pascual, manager at the Lussier Family Heritage Center at Lake Farm County Park, strolls along the StoryWalk that winds through a restored prairie. 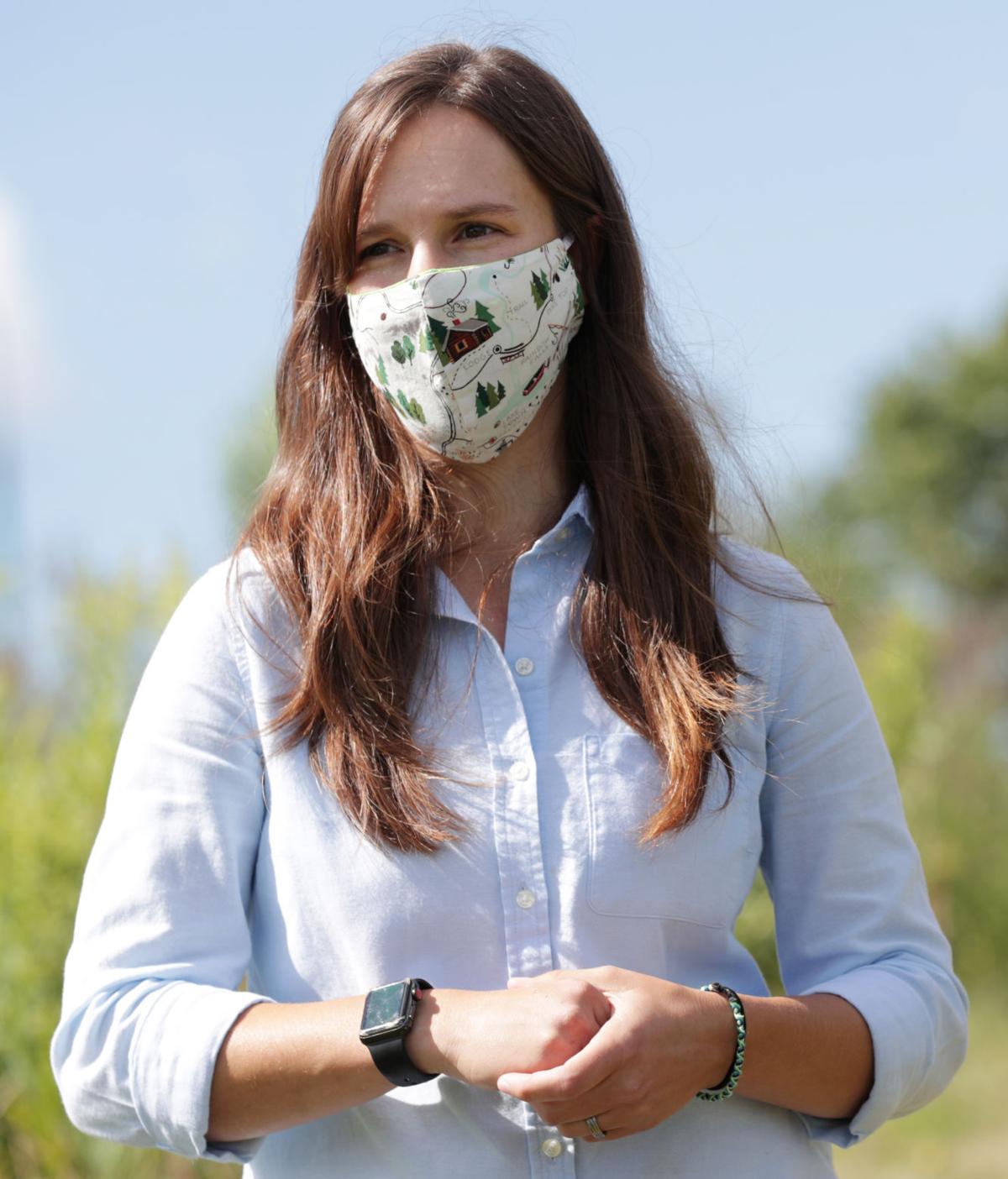 Lael Pascual, manager at the Lussier Family Heritage Center at Lake Farm County Park, graduated from UW-Superior with a psychology degree and earned a master's degree in environmental management from Harvard University. Pascual grew up in the village of Oregon and has been at the Heritage Center for the past three years.