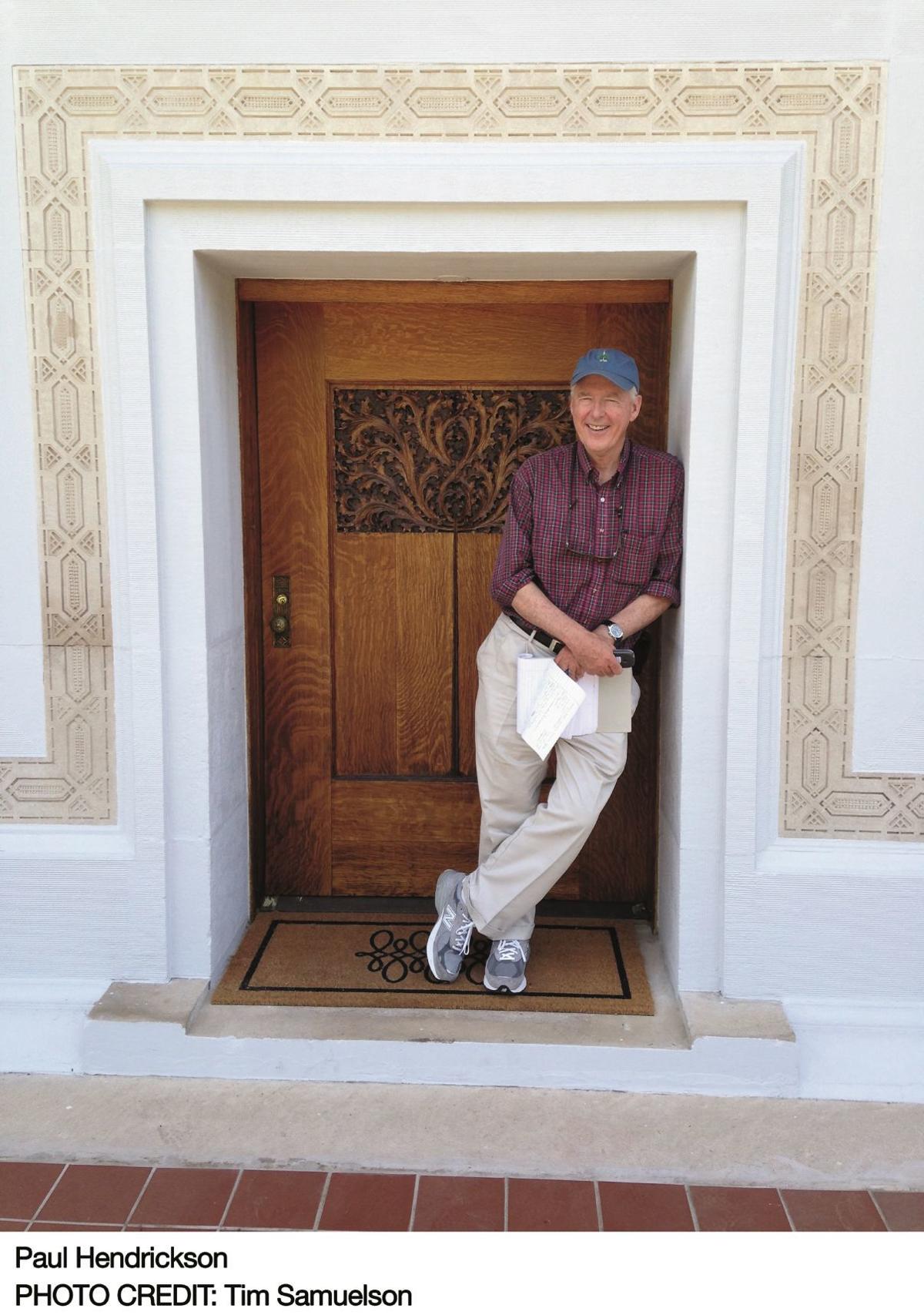 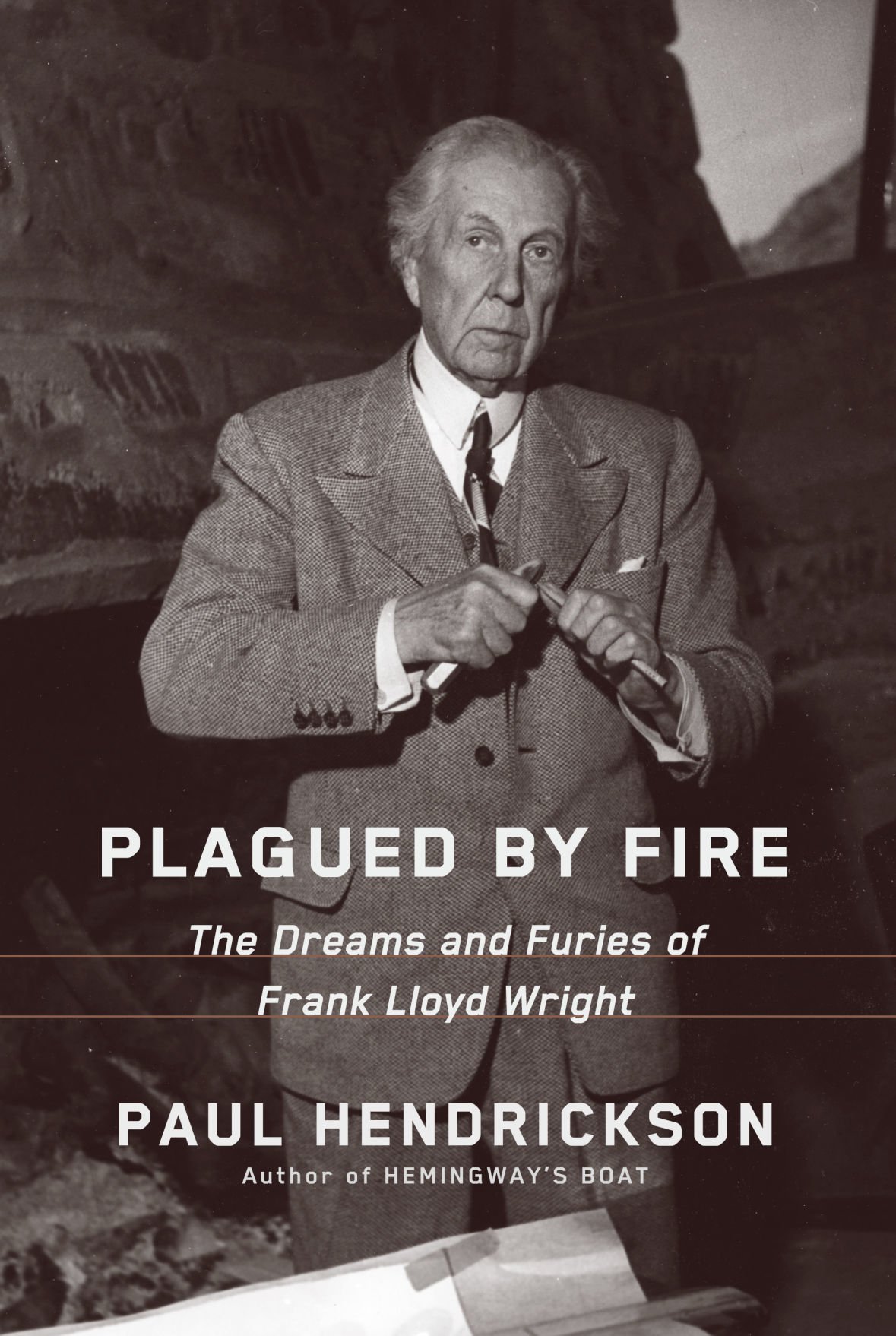 The most famous fire associated with legendary architect Frank Lloyd Wright happened in 1914 and destroyed the living quarters of his Spring Green estate Taliesin after the murders of seven people.

But it’s far from the only fire that Wright endured in his lifetime.

Paul Hendrickson’s latest book, “Plagued by Fire, The Dreams and Furies of Frank Lloyd Wright,” is due out Oct. 1 and Hendrickson will be speaking in Madison as part of next month’s Wisconsin Book Festival.

A former staff writer for The Washington Post, Hendrickson has written several books, including “Sons of Mississippi,” which won the 2003 National Book Critics Circle Award.

Q: In the prologue you say this book isn’t a biography, but a “synecdoche,” meaning you explain periods of Frank Lloyd Wright’s life to represent his overall life. It also seems like you’re trying to set the record straight on much of what people think they know of this Wisconsin architect. How do you describe the book and what it aims to do?

A: This is not what might be thought of as a cradle-to-grave biography. You could say I don’t know how to do that. Rather, what I try to do, as I’ve done in former books ... is make the parts stand for the whole. You’re trying to find these selected story-telling pockets ... and make them stand for the entire life. So you pick out what you feel are powerful moments and revealing moments and at the same time you are working ... east from west ... east from when he was born, and west where he dies. There’ve been too many (biographers) already ahead of me, what would have been the point of another biography? I’ve tried to say something different.

Q: How is this book different?

A: I was determined to try to set the record straight. Do you know what is passed along in nearly every Wright book? That Julian Carlton (the Wright servant who murdered seven before setting Taliesin on fire) was from somewhere in the West Indies. No, he was from our own country. Alabama. It was so important for me to try to set the record straight on that. I went to Alabama and I uncovered what I could about his life. Part of the reason I studied Julian Carlton was because Wright once said, “I believe that in the search for the answer, lies the answer.” In just searching for this guy, I was coming to some kind of understanding (about Wright).

Q: The book is called “Plagued by Fire.” Aside from the horrific fire and murders in August 1914 at his Spring Green home, Taliesin, how else was Wright’s life affected by fire?

A: It was not my intention to document or spreadsheet every fire, but when I started researching his life, I began to have my eyes opened to the degree that fire seemed to stalk him. This horrible incident on Aug. 15, 1914, where seven people die ... even the most causal Wright student knows about that. But fire threads through his life. There were fires of varying destruction in 1925, 1927, 1929, 1932, 1937, 1952 and in 1954 when his last child was getting married and her wedding veil caught fire. He was pacing in his white ice cream suit in the back of the church saying, “All my life I have been plagued by fire.” He dies in 1959 and in the early 1960s there were three fires in a row at Taliesin West in Arizona. It’s the phenomenon of fire that became a structural literary device ... constantly licking at the frames of the story.

Q: In “Plagued by Fire” you disproved much of what Wright wrote in his own autobiography.

A: Wright’s autobiography is a beautiful, beautiful book, but you have to distrust it on every page. He was a notorious distorter of the truth ... revisionist of his own life. He wrote that autobiography, and while it’s a wonderful, powerful read ... once you start examining the misstatements and the mistruths in it ... I was unwilling as an old reporter ... to take at face value things that had been said before.

Q: How did you first become interested in Wright?

A: I grew up in Kankakee, Illinois, where there were two Frank Lloyd Wright houses on the same street that I lived on in the 1950s. I would look over at them … one of them B. Harley Bradley ... it was if that house came down from Mars, it was so different from any other house that was in our small town. Something got into my head as a 9-year-old that got interested in Wright. It only took six and a half decades … for the Wright book and the right idea to have looped around and found me. I would like to think that the seed got planted about 1953 when I was a 9-year-old.

Q: How do you feel about the man personally?

A: His life is impossibly rich, as someone has said before me, you couldn’t make up his life because no one would believe it. When you scrape everything away, I have a fundamental admiration for this guy. You look at the work, you look at the buildings, for all the arrogance ... and his ego ... you’re overcome. Doesn’t there have to be a fundamental soulfulness at work? I believe when you scrape everything away, Frank Lloyd Wright was this guy who wanted to build beautiful structures and most of them were homes ... that’s almost slyly something about this decency, because he wanted to build shelters for mankind. Do I like him or hate him? It’s all of it joined together. He’s impossibly rich as a subject for a biographer. Wright is a survivor. All of those terrible things that happened ... you and I would not possibly be able to come back from (the deaths and fire of) Aug. 15, 1914. I kind of like the old boy, in spite of everything.

Q: How far and wide did you travel to research this book?

A: There are about 400 Wright works still standing in America. He designed over 1,100 ... but by no means did all of it get built. I have been in more than 100. I traveled very widely, … form the corner of Fifth Avenue and East 88th Street where the Guggenheim Museum sits to Spring Green, Wisconsin, to Scottsdale, Arizona, where Taliesin West is, to Alabama to California to Kansas. Gosh, I wish I could say I was retiring ... then I could visit the other 300.

Q: Do you have another book already in the works?

Q: Author David Maraniss will be facilitating your talk during the festival and he recently wrote a book about his father, “A Good American Family: The Red Scare and My Father.”

A: We worked 23 years together at The Washington Post. We’ve been friends now for more than four decades. I like to joke that he laps me on the track. For every book I write, he writes two. I admire him tremendously.

Q: Frank Lloyd Wright obviously left his mark on Madison and around Wisconsin. What do you expect it will be like discussing your book in Madison — a place he once lived and worked.

A: I’m honored to be there. I’m honored to come back to Wisconsin, to come back to Madison where (Wright’s) spirit oozes from the soul and character of Madison. I’ll be humbled to be on a stage with Maraniss. There will be Wright people, Wright-ophiles out in the audience. Illinois and Wisconsin ... this is sort of the heart of the Wright universe.

What: Author Paul Hendrickson will discuss his latest work, "Plagued by Fire," with author David Maraniss as part of the Wisconsin Book Festival

If the title doesn't grab your attention, the content will. The book "For Colored Girls Who Have Considered Politics" is written by four of th…