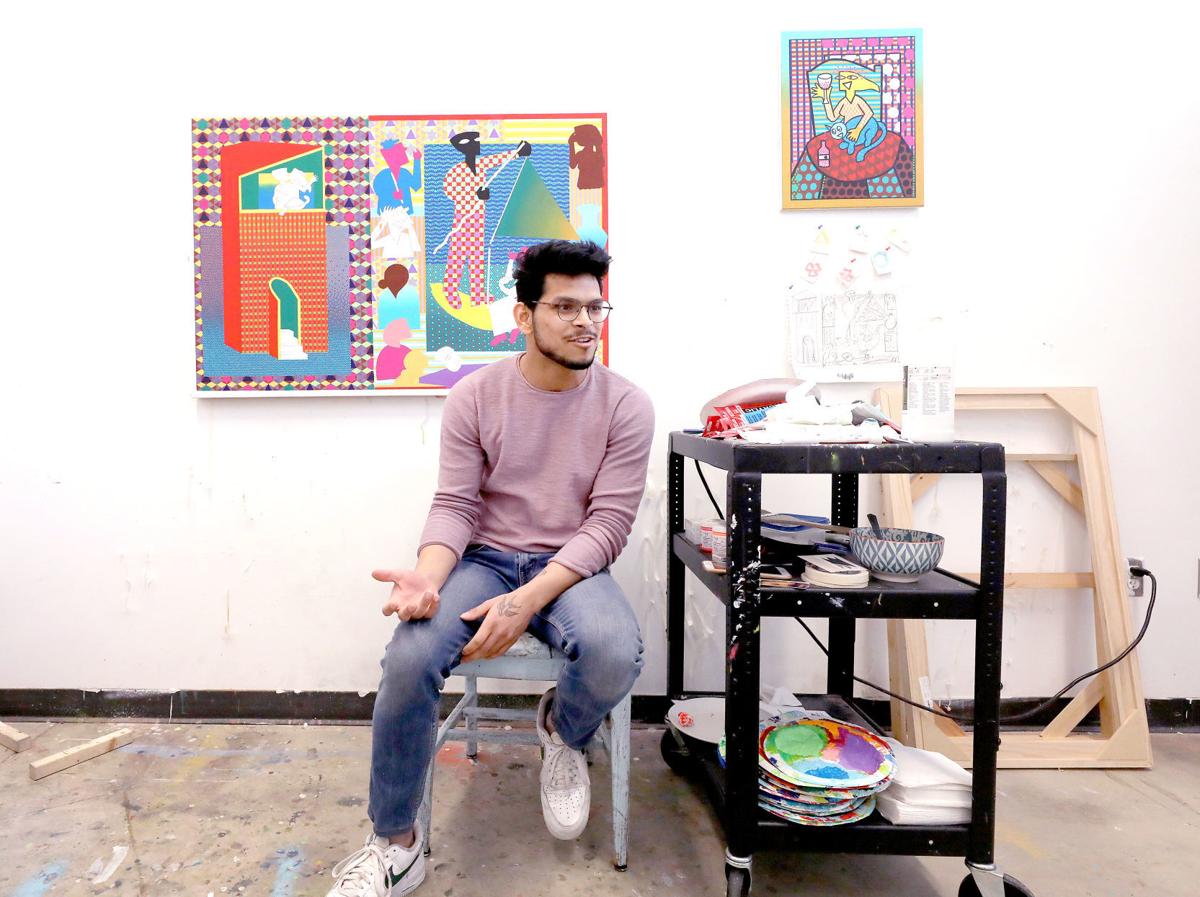 UW-Madison MFA student Pranav Sood talks in his studio at the UW Art Lofts about his work being featured in the Madison Museum of Contemporary Art's Triennial. 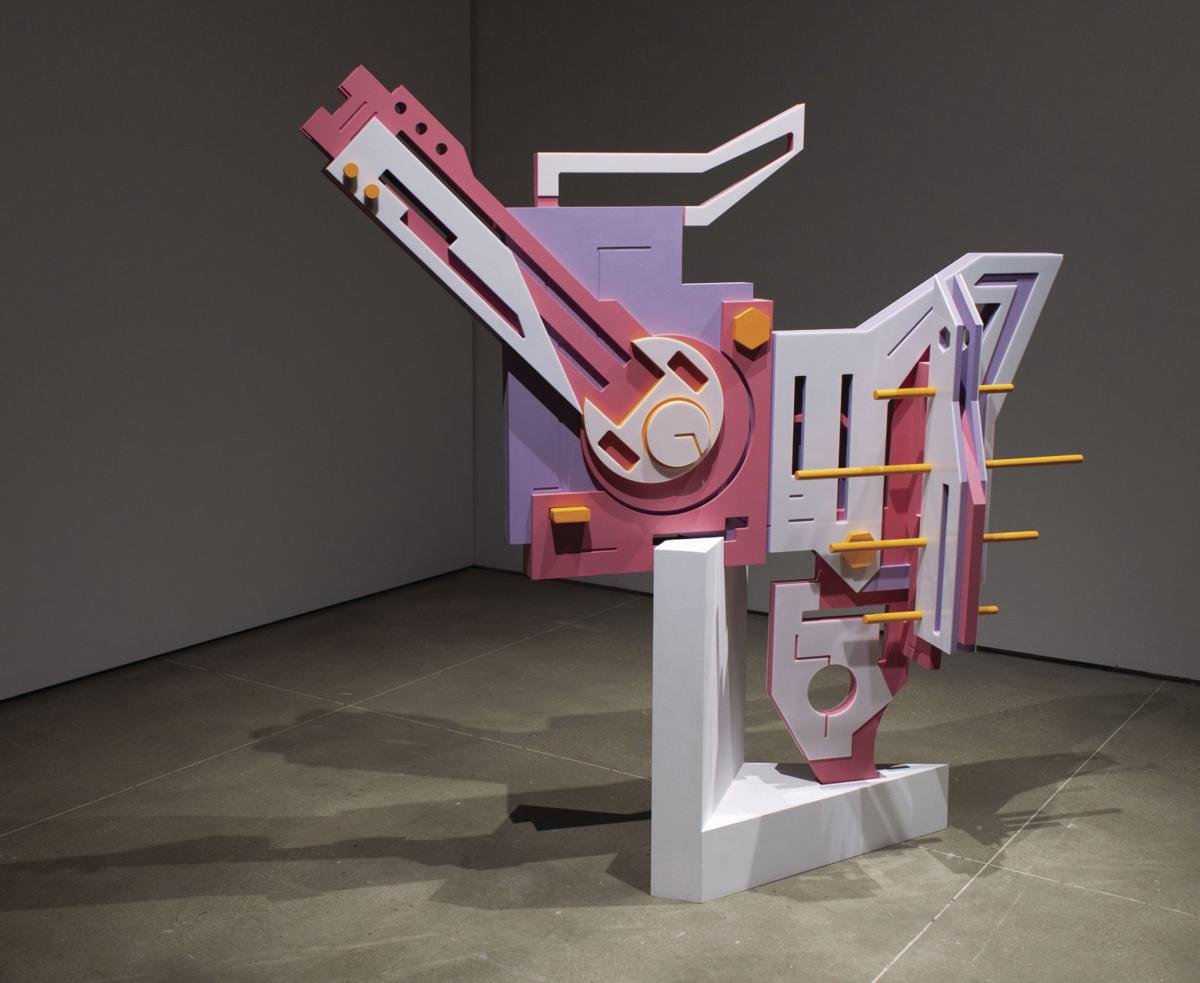 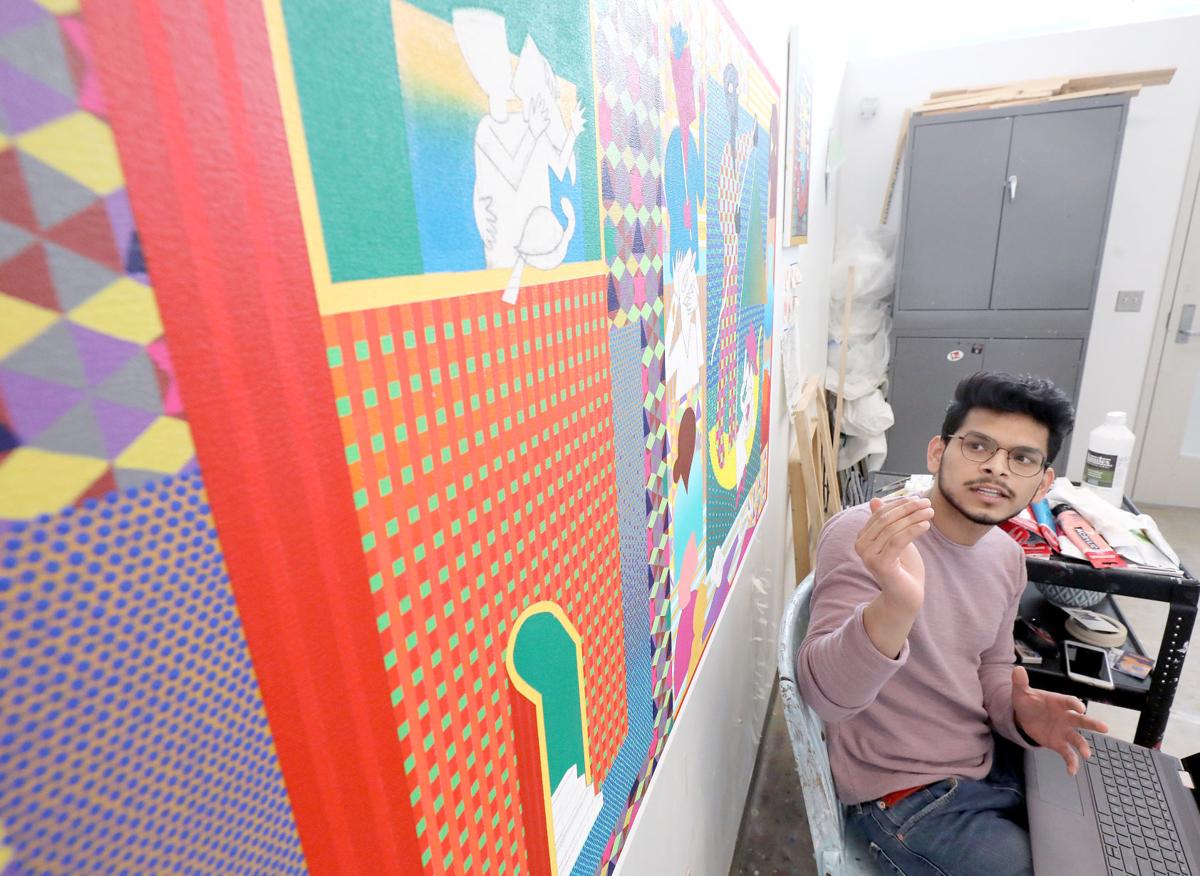 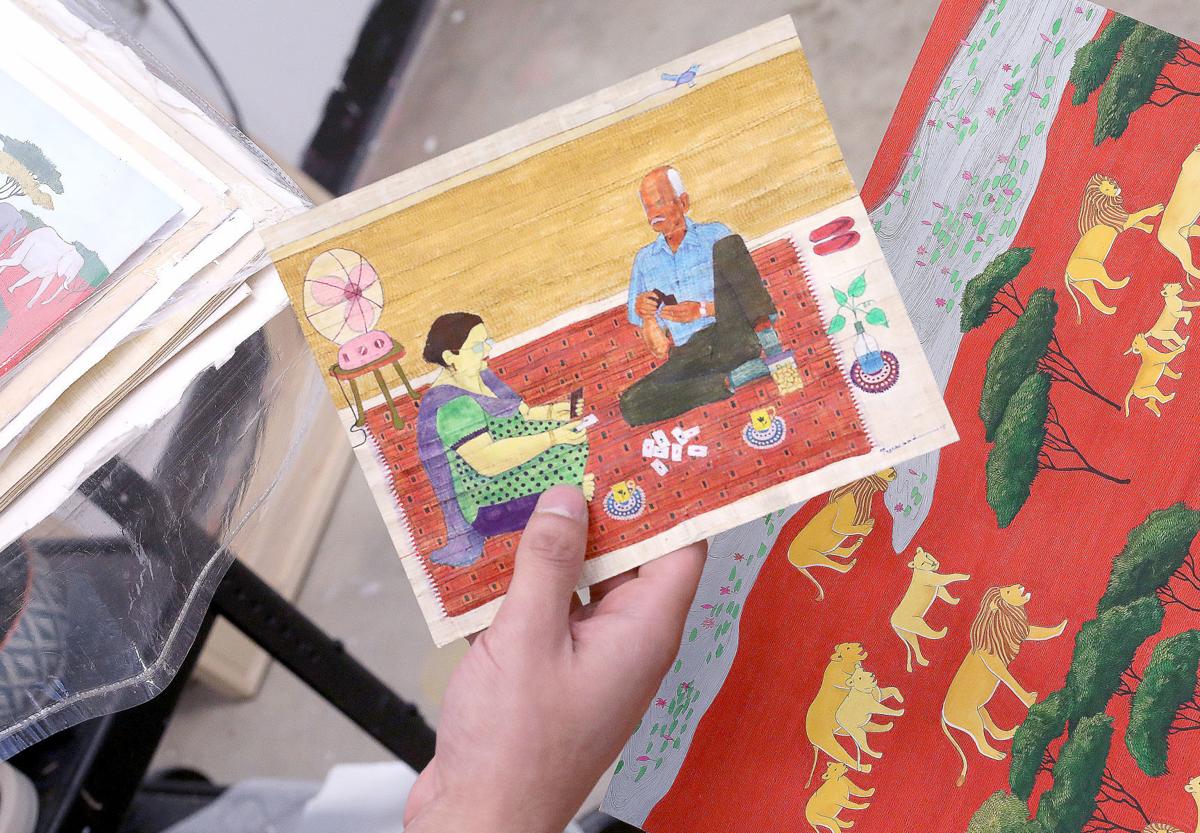 Artist Pranav Sood says he's influenced mainly by Indian, Persian and Egyptian art, as well as Op Art -- an abstract form where color use gives the illusion of movement. 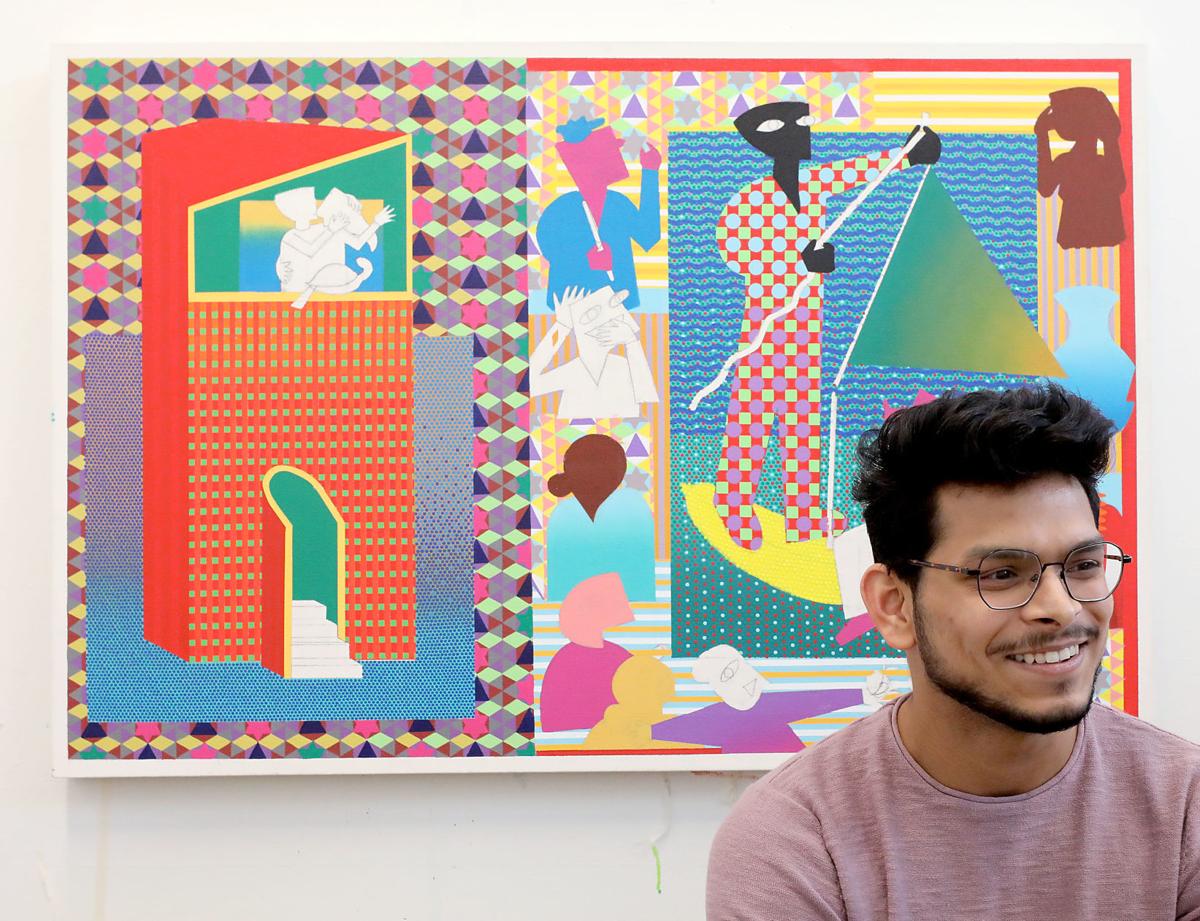 Three of artist Pranav Sood's works were chosen to be part of the Madison Museum of Contemporary Art's Triennial exhibit.

When Pranav Sood arrived in Madison from his native Punjab, India, he looked for a place to live with one priority in mind: It had to be near an art museum.

So Sood, a painter and new MFA student in the UW-Madison Art Department, settled into a Downtown apartment just half a block away from the Madison Museum of Contemporary Art. Admission is free, so he could drop in anytime. And he hoped to network with other artists and learn more about the American art scene there.

Little did Sood know that less than three years later his own work would be on a MMOCA gallery wall.

Sood is one of 32 artists or artist collectives with Wisconsin connections featured in the upcoming 2019 Wisconsin Triennial. Opening at MMOCA, 227 State St., with a special evening at 6 p.m. Friday and running through Feb. 16, the prestigious Triennial showcases some of the state’s top talents in the visual arts.

Hundreds of artists applied for the show. Seventy were selected for in-person studio visits by MMOCA curators. The 32 chosen for the exhibition range in age from their early 20s to their 70s — emerging talents as well as long-established artists.

“There’s a lot of new names and exciting pieces” in the 2019 Triennial, said Leah Kolb, MMOCA curator of exhibitions. And the artists — selected for not only their skill level and the statements they make with their work, but also for their diverse backgrounds and artistic styles — also create a snapshot of what is happening in the broader contemporary art world.

Inspiration from the past

The Triennial jury — Kolb, plus MMOCA director Stephen Fleischman and curator of the collection Mel Becker Solomon — found many of the state’s artists using a contemporary lens to look at their own cultural and personal heritage.

“We realized that people were gravitating toward the past,” Solomon said. “I think that really speaks to the tumultuous times we’re in.”

Jeffrey Repko will have two sculptures in the show, one of them in the MMOCA rooftop garden (he likewise has an outdoor piece, “Memento,” in Madison’s Elver Park). Repko, 29 and associate professor in sculpture at the University of North Georgia, was in graduate school at UW-Madison when he began looking to his childhood for inspiration. His recent sculptural pieces combine a sense of playfulness and the “saturated” colors of the pre-digital-age 1980s and ’90s, which he says brings an “adult Lego” feel to a lot of his work.

“I work a lot with color in my work. I think there’s an innate optimism in color,” Repko explained. As a child, the toys he played with — take a Transformer, for example — seemed to have “limitless potential,” bound only by the edges of imagination.

Sood’s paintings are likewise grounded in his cultural roots but influenced by his own young life.

Sood’s large acrylics, showcased earlier this fall at the Edgewood College Gallery, tell intricate stories of love, courtship, whimsy, youth and family, all in vibrant hues and layers of pattern.

In the house where Sood grew up, “Everywhere there’s geometry,” he said.

Three of Sood’s works were selected for the Triennial. “Who is She?” shows a young woman surrounded by suitors, “all trying to impress one girl,” Sood said. It was inspired by the day in high school that Sood spotted a girl walking in his classroom door “and I thought, ‘She is really cute.’”

Six years later, she and Sood are still devoted to one another, doing long video chats between the U.S. and India and visiting when Sood is back home during summers. (He has yet to introduce her to his family, however.)

Sood’s painting “All She Wanted Was Diamonds” “has so many connected stories, different boys giving her presents, telling her ‘I am the perfect boyfriend, I will bring all the stars, moons and everything for you,’” he said.

The third painting, “Love is What We Do,” is a love letter to young romance and also familial love. Sood has refrained from telling his family directly about his girlfriend (in accord with cultural norms) but imagines the moment he “will proclaim that secret love,” he said. “This is the painting I did for that moment.”

The buoyant Sood grew up in a household of 13, with parents, children, grandparents, aunts, uncles and cousins all under one roof. “We will sit together for the dinner one day, and I will speak up” about his girlfriend, he explained — noting, however, that “Love is What We Do” is not only about his courtship, but also the love of a close, extended family.

Though influenced by everything from Byzantine art to Gothic art, Sood describes his main influences as Indian, Persian and Egyptian art — not to mention Op Art, an abstract form where the precise use of color gives the illusion of movement.

Sood originally studied the traditional regional style of Indian miniature painting and did his BFA studies at Chandigarh, Punjab University, Government College of Art. He applied to UW-Madison for graduate school because of its acclaimed art faculty — and also its cold winters.

“I wanted to go into a place where it snows more. Because India is hot, and I don’t like those sweaty places,” said Sood, the first in his family to leave India.

“I thought, ‘Let’s go to Wisconsin.’ One of my friends was here studying for her Ph.D.” and also urged him to look at UW.

It was in Madison that he developed his distinctive pattern style.

“Before that, I was making patterns in just dots,” he said. “Here, I felt I needed to increase my vocabulary, to make things faster and also more interesting.”

“Symmetry and color is really important in my work. If somebody buys my work, I want them to get the best deal so they can enjoy my painting for a long period of time,” he said. “They can feel the intricacy, they can feel the color. It matches any couch or anything, with all the colors.”

It was on a trip back home to India that Sood heard he was among the elite group of artists selected for the 2019 Wisconsin Triennial. Next he plans to work on a 12-foot-by-6-foot painting for the MFA show he will put together before his graduation from UW-Madison next May.

The new painting will join the same series as “Who is She?,” “All She Wanted Was Diamonds” and “Love is What We Do,” he said.

“I will continue with the love story for the time being,” Sood said. “I feel like I can explore so many things.”

The city's Urban Design Commission will consider the plans Wednesday.

UW-Madison MFA student Pranav Sood talks in his studio at the UW Art Lofts about his work being featured in the Madison Museum of Contemporary Art's Triennial.

Artist Pranav Sood says he's influenced mainly by Indian, Persian and Egyptian art, as well as Op Art -- an abstract form where color use gives the illusion of movement.

Three of artist Pranav Sood's works were chosen to be part of the Madison Museum of Contemporary Art's Triennial exhibit.