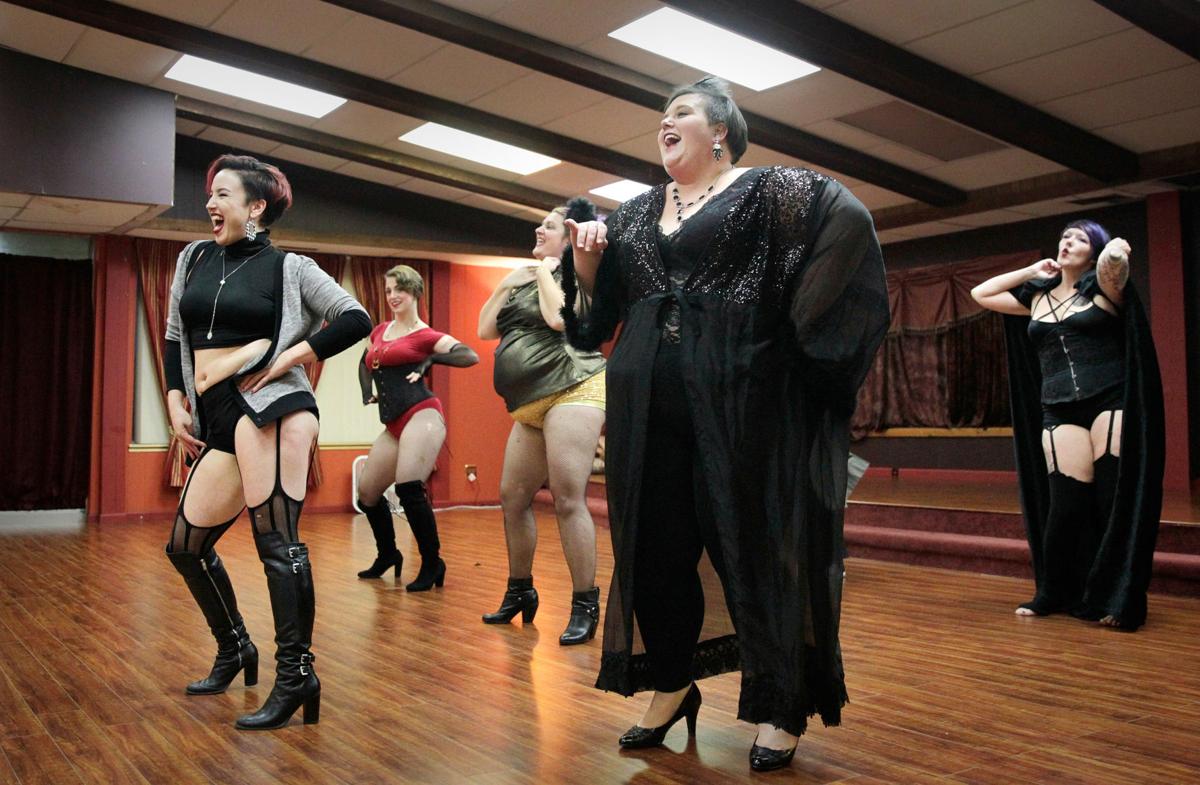 Arielle Juliette, left, leads "Inappropriate Song Night" variety show participants in a rehearsal at Dance Life studio. Finn Enke, UW-Madison professor, said if Inappropriate Song Night was a burlesque variety show opened its doors to everyone it wouldn't be what it is. Events like this that are supportive of women are powerful in that they foster "a community that is supportive rather than competitive. That in itself is super, super powerful." 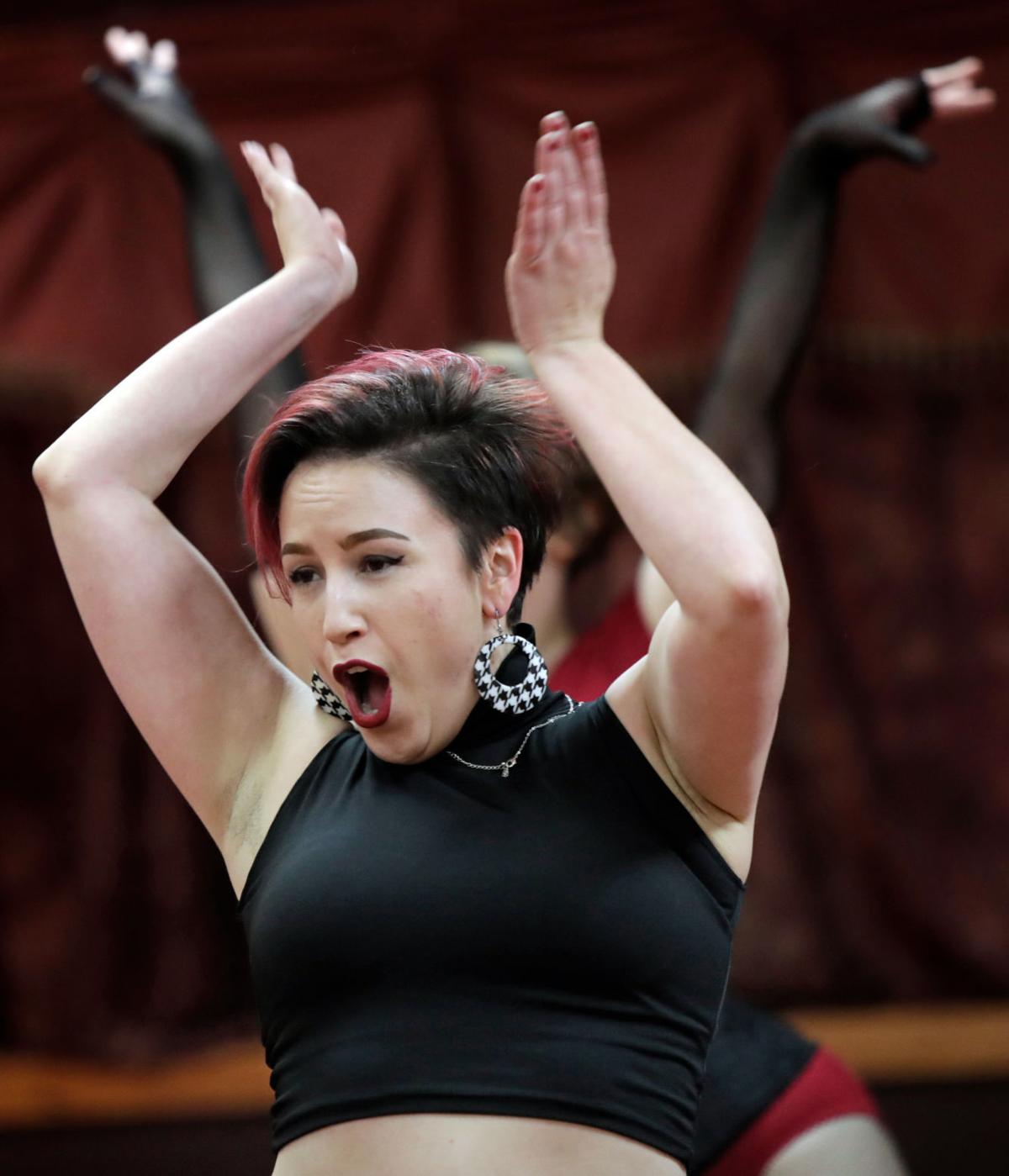 Inappropriate Song Night hasn't gotten much publicity or done advertising in the five years it's been around. But Dance Life owner and ISN ringleader Arielle Juliette said it's word of mouth that's grown the event. "People tell their friends that this is the most fun thing ever. We do tell people about it, but it really isn't necessary. People get a taste of the environment (women) never get and that's a beautiful thing." 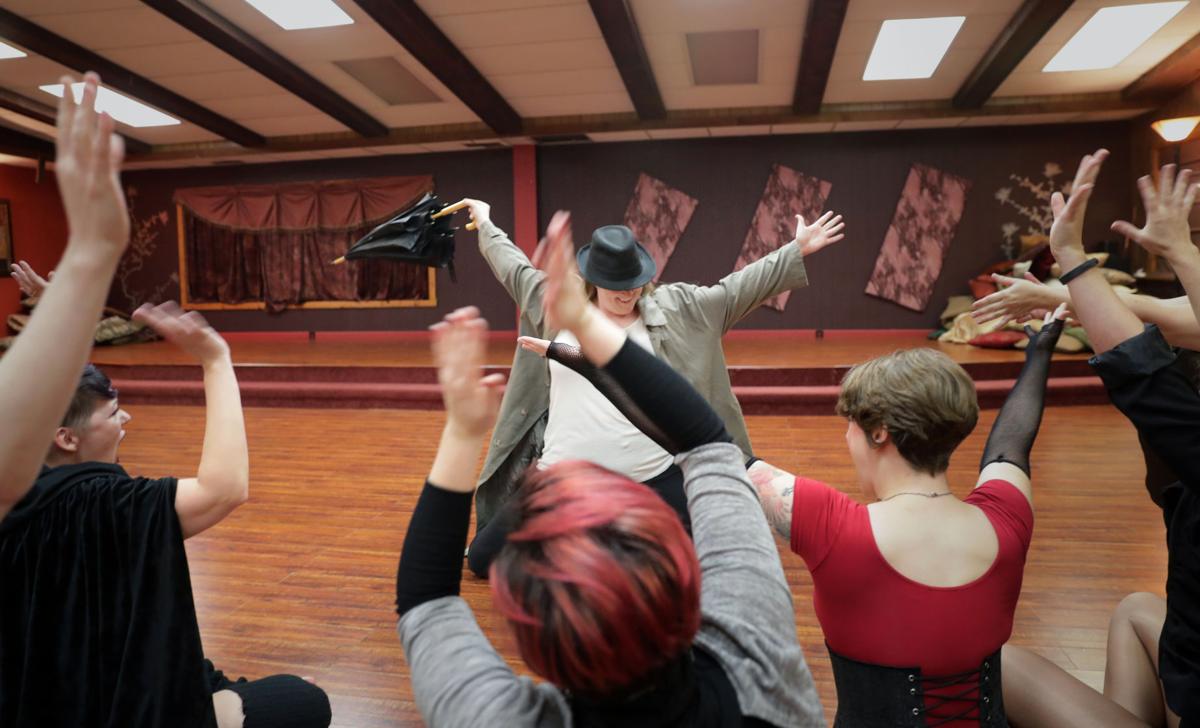 Inappropriate Song Night participant Leslie Blaize called the event "pretty unusual." She said it's an opportunity for people to be themselves and more importantly to be "authentic."

As a grandmother, Leslie Blaize said it might be hard for people to believe that she performs burlesque. It would have been a surprise to her as well before she encountered Dance Life where the longtime dancer found a passion for the form.

Blaize gets the confidence to participate in the performance because of Inappropriate Song Night—an event hosted by Dance Life at 6725 Seybold Road which admits only people who self identify as women or nonbinary.

“I would never perform in front of men,” Blaize said. “I wouldn’t feel comfortable, but I’m comfortable here.”

That is precisely what Dance Life owner Arielle Juliette hoped for when she started ISN five years ago. To give women a space to call their own to express themselves away from “the male gaze.”

There really aren’t places for women or non-binary people to embrace their sexuality which makes ISN an important space, she said.

ISN is an evening of performance, a burlesque involving whatever the performers wish to do. But it’s burlesque in the traditional sense—a variety show.

“The one word that gets associated with it is ‘liberating,’” Juliette said. “It’s not a sexual event, it’s just women being comfortable in their own skin. We just need to have that space and feel OK and to feel safe doing this.

So many of us are defined by the roles we play for other people, but here we can be ourselves.”

Work- and home-life labels are left at the door during ISN. Audiences aren’t allowed to photograph or record the performances to protect the privacy of those on stage.

Anywhere from 100 to 150 people come out to enjoy the event which features between 14 to 23 acts involving dance, skits, comedy or anything, Juliette said.

Some of those acts may encompass what burlesque has come to mean, a sultry performance, though the concept of a variety show leaves that direction of performance open ended.

Burlesque was traditionally a variety show atmosphere in which performers would lampoon societal mores, current politicians or other things like that — “it wasn’t just women taking off their clothes,” said Jessica Jane Witham who founded local troupe Peach Pies Caburlesque.

Caburlesque is the combination of the terms “cabaret” and “burlesque.”

Witham, who began her troupe in the early 2000s, is grateful to see other performance artists reclaiming burlesque’s artistic roots.

“Burlesque as it is now is in a new age which is about reclamation,” she said. “It’s being taken back from the sexualization of women.”

Instead of allowing the art form to sexualize them, the performers of ISN are taking control.

For some it means allowing their sexy side to come out with voluptuous lingerie while others are more inclined to cover up.

Blaize said she dresses modestly because that is how she is comfortable although she appreciates that Dance Life gives women the option to do what’s right for them — appreciating ISN comes down to being open to whatever the performers are doing to express themselves.

“There is something freeing about burlesque and doing these numbers,” she added. “Dance is fun in a variety of ways, but burlesque is fun in that it’s about letting go of your inhibitions and just going with the music.”

Despite not being included in participation, ISN has not received much push back from men or trans men about attendance.

Feedback has largely been from partners of the performers who simply want to support them, Juliette said.

She added that men and trans men tend to understand the need for a space like ISN. They respect that the event isn’t for them.

Blaize said her husband, for example, would love to come see her perform at the event, but he understands why he can’t.

Even if male-identifying spouses or partners were permitted at the event, having them there could still be a difficult hurdle for the women attending or on stage.

“It’s challenging,” said Witham, who said she was “terrified” the first time she performed burlesque in public. “It’s hard to do it in front of strangers even if the strangers are the partners of someone you trust.”

Part of the challenge for ISN’s inclusion practice is their attendance rule not allowing trans men to attend the show.

Finn Enke — a nonbinary trans male and UW-Madison professor of Gender and Women’s Studies, History and LGBTQ Studies — said a safe space like ISN could serve as a healing experience for the trans men who experienced misogyny in their lives as well, which prompted Juliette to take action.

Juliette called ISN a “very gender fluid space” open to changing as the needs around it changes and in an effort to be more inclusive she is planning another event in the same vein to be held later this winter that will include any trans men who wish to attend.

“ISN is for anyone who has suffered from misogyny and trans men are certainly included in that,” she said. “We offer a space to heal from the misogyny of the world at large, and I want anyone who needs that to experience the solace.”

Juliette said the exclusion of trans men in ISN was purely out of respect — to ensure that the trans community did not see this “femme event” lumping trans men into a feminine group.

Spaces like ISN, often called “feminist spaces”, used to be more prevalent particularly during a period of time when places like workplaces were really only open to men, Enke, a feminist who has even written a book about feminist spaces, said.

While it may be exclusionary, having a safe space like ISN is important for the performers who take part.

Having a space where everyone feels comfortable in their own skin and sexuality is great, especially for new performers, Witham said.

Juliette said even those who come into the event not knowing it’s an “escape from the male gaze” still leave with that strengthened feeling.

Being able to express whatever needs expressing is, in part, what makes something like ISN so special according to Enke who said “however they want to use their bodies, to show whatever they have experienced and to do something in a space where there is no question about validation from men — there is no question of evaluation from men. There is none of that (stuff) that is so pervasive in our culture.

That strikes me as a super important thing to have.”

Even for Juliette the idea of performing burlesque routines in front of men was a daunting one. It wasn’t until this fall that she took that step herself with a publicly performing troupe.

She said it was a big step for her. She even had significant doubts about it the week before her performance.

If there are other local shows like ISN, Juliette hasn’t heard of them. But it is heartening for her to know that the idea is spreading.

A company in Atlanta contacted her with questions about starting their own version of ISN.

“That was great,” she said of the contact. “I’d love to see this take over.”

Equal at last? APT's 'Taming of the Shrew' levels the playing field

Performed with gonzo energy by a cast of five, American Players Theatre’s adaptation of “The Taming of the Shrew” is hilarious and surprising.

The Week Ahead: WI Science Fest, Book Festival, a corn maze and more

With 'Rhapsody' and a heroic symphony, MSO returns to full strength

The Madison Symphony Orchestra welcomes back the woodwinds and brass with a concert of grand orchestral colors, virtuosic playing and powerful tunes.

Relive the '90s with “Friends! The Musical Parody,” fill up at the Monona Chili Fest, stop by the Palestinian Crafts and Olive Oil Fall Sidewalk Sale and more.

This is the third year for the Forward Art Prize, which honors women-identifying visual artists in Dane County. Each woman will receive $10,000.

The 1991 Kander and Ebb revue “The World Goes ’Round” is the first Overture outing for Madison-based Capital City Theatre since 2019’s “On the Town.”

Arielle Juliette, left, leads "Inappropriate Song Night" variety show participants in a rehearsal at Dance Life studio. Finn Enke, UW-Madison professor, said if Inappropriate Song Night was a burlesque variety show opened its doors to everyone it wouldn't be what it is. Events like this that are supportive of women are powerful in that they foster "a community that is supportive rather than competitive. That in itself is super, super powerful."

Inappropriate Song Night hasn't gotten much publicity or done advertising in the five years it's been around. But Dance Life owner and ISN ringleader Arielle Juliette said it's word of mouth that's grown the event. "People tell their friends that this is the most fun thing ever. We do tell people about it, but it really isn't necessary. People get a taste of the environment (women) never get and that's a beautiful thing."

Inappropriate Song Night participant Leslie Blaize called the event "pretty unusual." She said it's an opportunity for people to be themselves and more importantly to be "authentic."