When you see Alexa King and her husband pull out of their rural Verona driveway towing a horse trailer, there might not be a real animal inside.

But it’s a horse all the same.

King is best known for creating the colossal statue of racehorse Barbaro that stands outside Churchill Downs — and which is now one of the best-loved landmarks in Kentucky.

She sculpted that work of art in, of all places, her garage in Middleton. It was unveiled at the start of the race season in 2009, just a few days shy of the Kentucky Derby.

King left Wisconsin for awhile, but now she is back, living with husband Eric Bolland on five acres southwest of Madison. And, again, creating exquisite, large-as-life statues of horses in her garage.

Her latest project is for the Paris, Kentucky, horse farm of a noted equestrian: a life-size bronze sculpture of a world grand champion Saddlebred, with the woman, his owner, in the saddle.

In June the community of Savage, Minnesota, will unveil King’s statue of Dan Patch — the “World’s Champion Harness Horse” who in the early 1900s was one of America’s most famous sports celebrities — and his owner, M.W. Savage. One-third life size, the statue will be placed in front of the City of Savage’s library.

Fundraising for another, $1.2 million Dan Patch statue by King, this one 50 percent larger than life, is underway for a site outside the Minnesota State Fairgrounds, where Dan Patch set a world record.

And the artist is already planning yet a bigger project that will take her around the world.

But this week, King, 65, will be back in Louisville, watching the horses a few days before the start of the 2018 Kentucky Derby, though she doesn’t plan to be among the some 155,000 people in the stands to watch “The Most Exciting Two Minutes in Sports.”

“People sometimes ask ‘Why do you do horses?’ I say, ‘Because that’s what I know,’” King said recently, as she climbed up a stepladder to work on the texture of the champion saddlebred she was fashioning in her Verona garage.

“I’ve watched them, studied them, raised them,” she said.

“Took care of horses. So you get to know the feel of a horse. How it looks. The first time I cast a horse, when I touched the bronze it was cold — that was weird.

“And a lot of people in the horse business are art collectors, and they like statues of their horses. And dogs,” she said. “So that’s what I do.”

Four feet off the ground

The “Barbaro” statue took King’s career to a new level, and helped lead to many of the commissions she has today, the artist said. King was selected in 2008 from scores of applicants by Roy and Gretchen Jackson, who owned the storied Thoroughbred, and wanted to memorialize him.

Barbaro was the magnificent winner of the 2006 Kentucky Derby. But he shattered a leg two weeks later in the 2006 Preakness Stakes and later developed laminitis, the hoof ailment that led to his death. His illness drew an outpouring of concern from around the world. He was euthanized in January 2007, and his ashes now lie beneath King’s statue.

In creating a design for the Barbaro statue, “The requirement was: all four feet off the ground, Barbaro winning the Derby,” King said.

The whole project, from commission to installation (which happened in the dark of night, so that no one could view the artwork before its unveiling), took one year. King designed the entire plaza where the statue was set. Working 18-hour days, she molded the likeness of Barbaro and his rider in her garage because she could not find studio space large enough on such short notice.

“Usually these take two or more years,” she said of the project. “But at the presentation to the Jacksons, the owners of Barbaro, I knew they were going to say, ‘Can you get it done by Derby next year?’ So I had everything lined up – my foundry people, my mold people.

“And we wanted to put this whole thing to bed. They had been through lot” with Barbaro’s death.

The creation of the Barbaro statue — and the artistic and engineering challenges King faced — is the subject of a 29-minute documentary, available to view via King’s website alexakingstudios.com.

Doing it the hard way

But “Barbaro” is only part of King’s resume. The sculptor’s work has sold at the world-famous auction houses Sotheby’s and Christie’s, been featured in museums and galleries around the country, and is the centerpiece of landscapes both public and private.

To create a work, King starts with painstaking research. She next constructs an armature – essentially the figure’s skeleton – and fills it with housing insulation and foam to make a lightweight form. She covers that base with a wax-based clay and begins the detail work, bringing a sense of life and motion to her subject. (For horses, she sometimes even uses a curry brush, the kind used to groom equines, to texturize the coat.)

A mold-maker then takes over, often staying at King’s house for months while the work is done. The molds are sent to a foundry for the sculpture to be cast in bronze.

“There are new processes that we can use when we make statues, which is to take a small one, digitize it, blow it up and cut it out. I don’t like to do it that way,” said King. “So I do it the hard way.”

“Alexa uses a technique that is about as modern as the 15th century,” her husband jokes. When needed, a work-in-progress get hauled from place to place in the horse trailer – because, as with a real horse, it’s a good fit.

Growing up in southern Indiana, where her father was the Army post commander at Camp Atterbury, King got the horse bug in third or fourth grade.

“When I was a kid, I raced trotting ponies on the track. I was woman driver of the year when I was about 15,” she said. Even younger, she developed a passion for making art alongside her mother, a painter.

“I’ve never done anything but that. I’ve always been an artist,” King said in an interview for “Sculpting the Wind.”

After taking art courses at Ball State University, she got her first break early in her career, when representatives from the Nelson Rockefeller Collections saw her work at a wildlife and western art show and commissioned her to do a horse and rider sculpture depicting the Pony Express.

“I didn’t have any time to think about it. Here it was like — you’d better get on with it, baby,” she said. “It was sort of like learning on the fly.”

King originally moved to the Madison area in the early 1980s. About the time the “Barbaro” project came along two decades later, she was also finishing up her art degree at UW-Madison, parenting her three children, and creating the statue of a veterinarian, using her daughter Nicole as a model, that stands outside the UW School of Veterinary Medicine.

Soon King hopes to launch another project: Creating life-size sculptures that portray the relationship between man and horse through history, and that will be placed on every continent.

“She’s one of the most interesting people I’ve ever met,” said Bolland, her husband of 16 years, a writer and scholar in residence in the Business School at Cardinal Strich University.

They have six adult children between them, spread across the U.S. and Canada.

Siblings, friends and affection for the Madison area drew them back to Wisconsin. King, along with working on commissions, eventually would like to teach, hold sculpture workshops and reconnect with Madison-area friends.

She and Bolland still own a log cabin from 1860 along the Kentucky River, and stay there when doing business in Kentucky. Next month she hopes to bring her three horses (two are “very geriatric,” and one she rides) from Kentucky to Wisconsin to board closer to home.

With the unseasonably chilly weather this spring, her garage has been cold, making it hard on her hands. The clay she works with becomes stiffer when temperatures drop. But it’s still good to be back.

“We love it here. At first we were thinking maybe (move to) someplace warmer,” said King. “But we really like it here in Madison.”

Two years after Tom McEvilly took the helm at Baraboo’s historic downtown theater, its board of directors is looking again for a change in leadership after declining to renew his contract late last month. 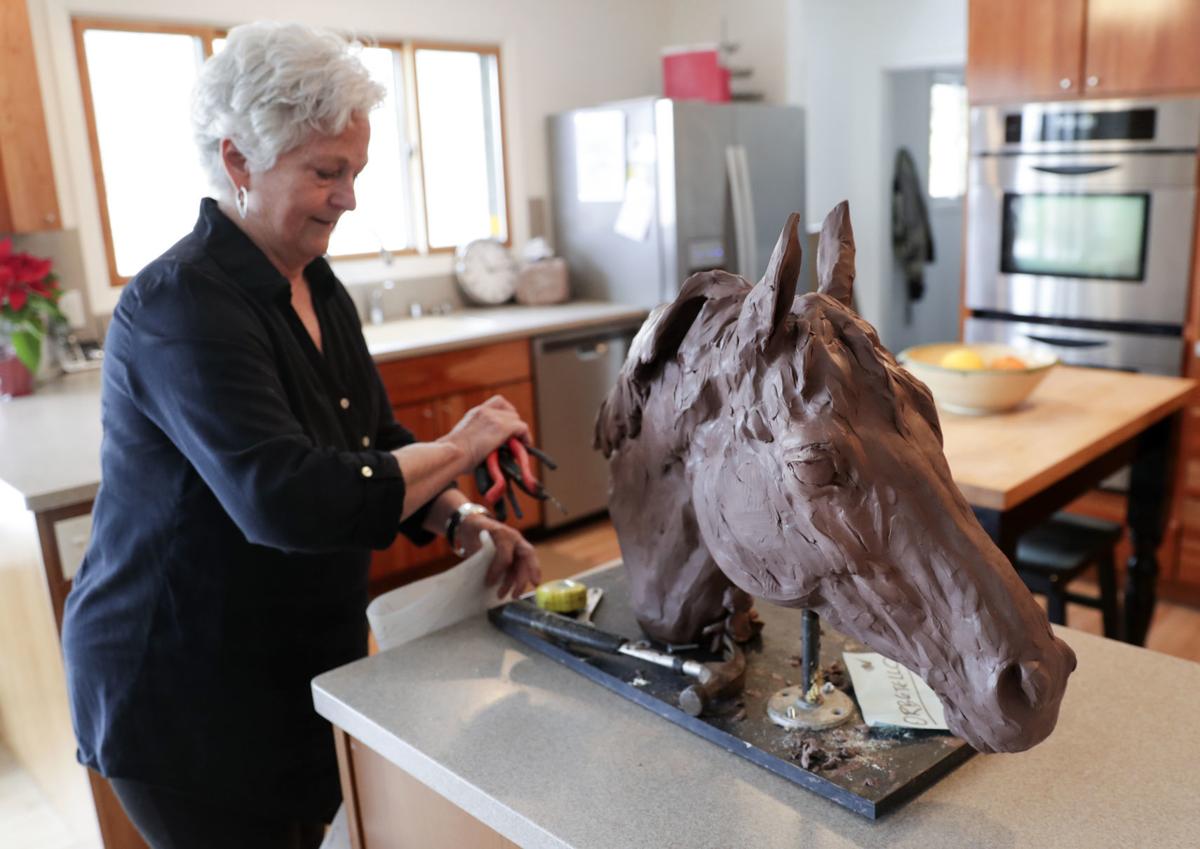 Alexa King works on a sculpture in the kitchen of the rural Verona home she shares with husband Eric Bolland. She sometimes heats the wax-based clay she uses to sculpt with because it is more malleable at warmer temperatures. 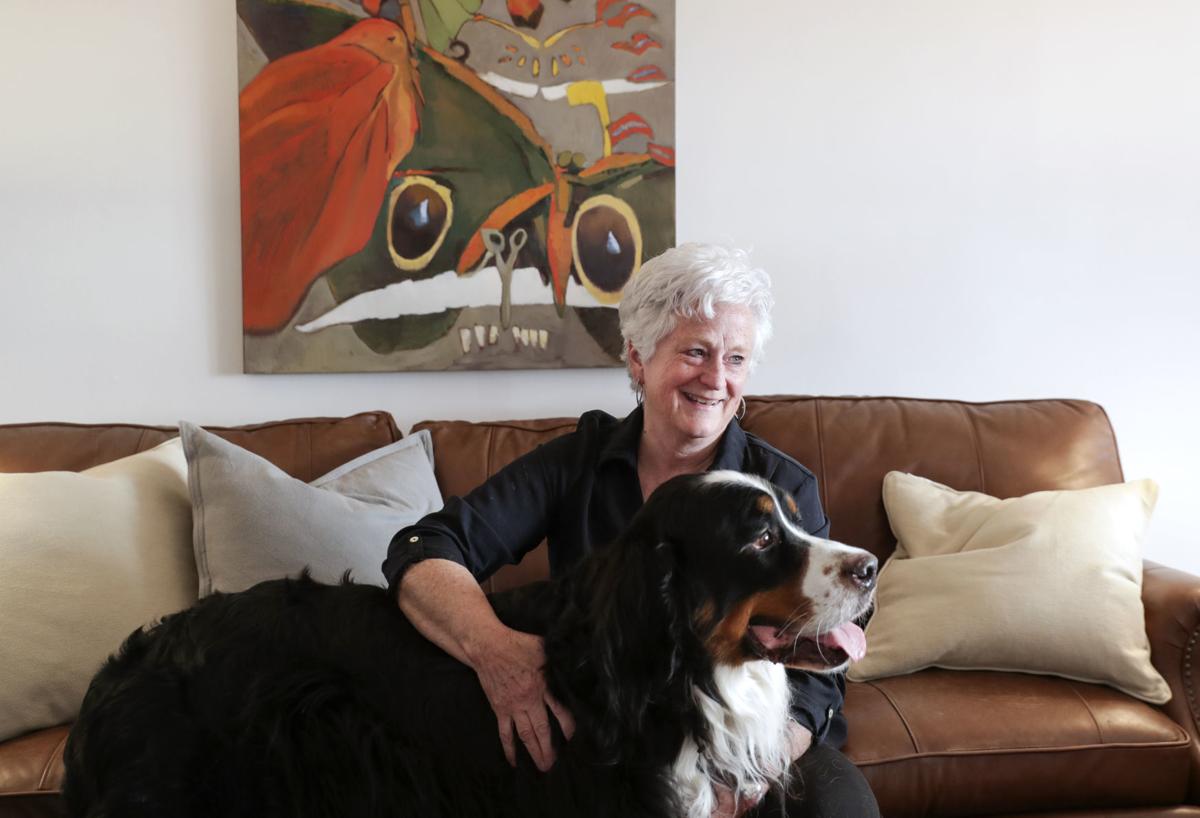 Alexa King, creator of the famed "Barbaro" statue at Churchill Downs, relaxes with her dog Aubrey as she takes a break from sculpting a life-size statue of a horse in her rural Verona garage. 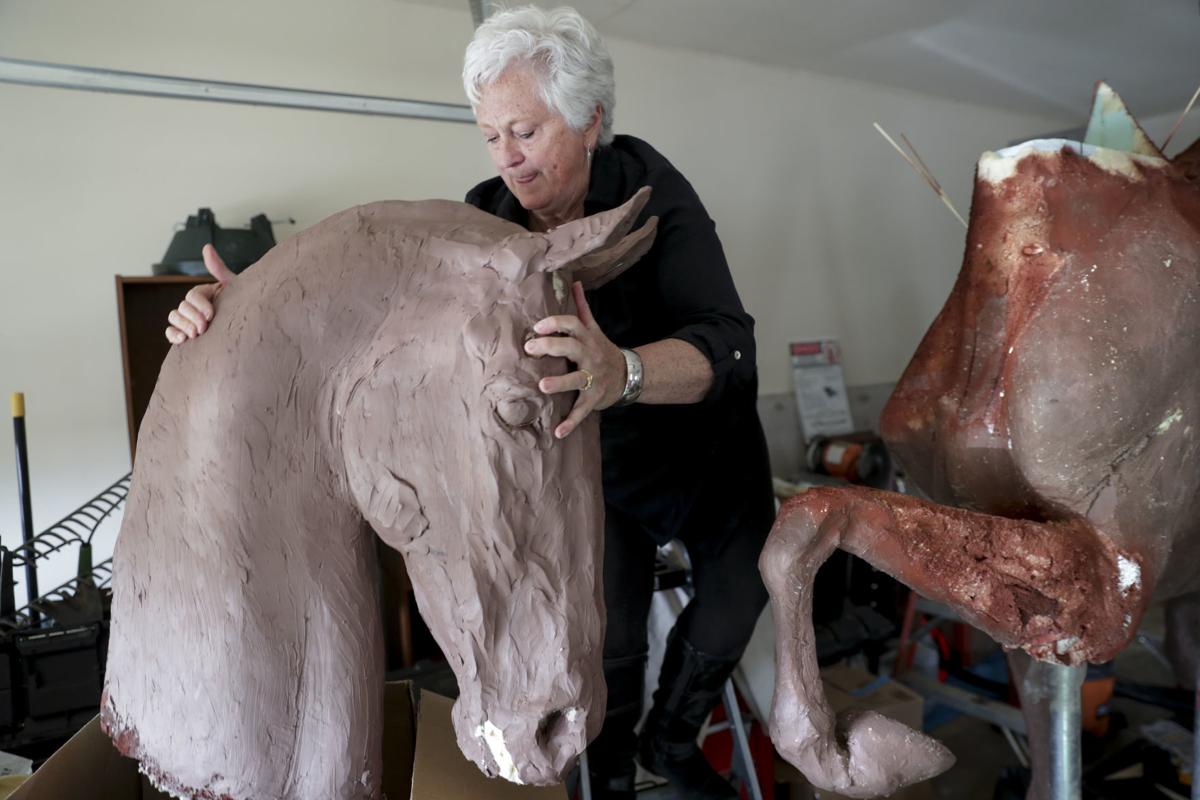 Artist Alexa King moves the clay head of a horse sculpture that eventually will be cast in bronze and placed on a horse farm in Paris, Kentucky. 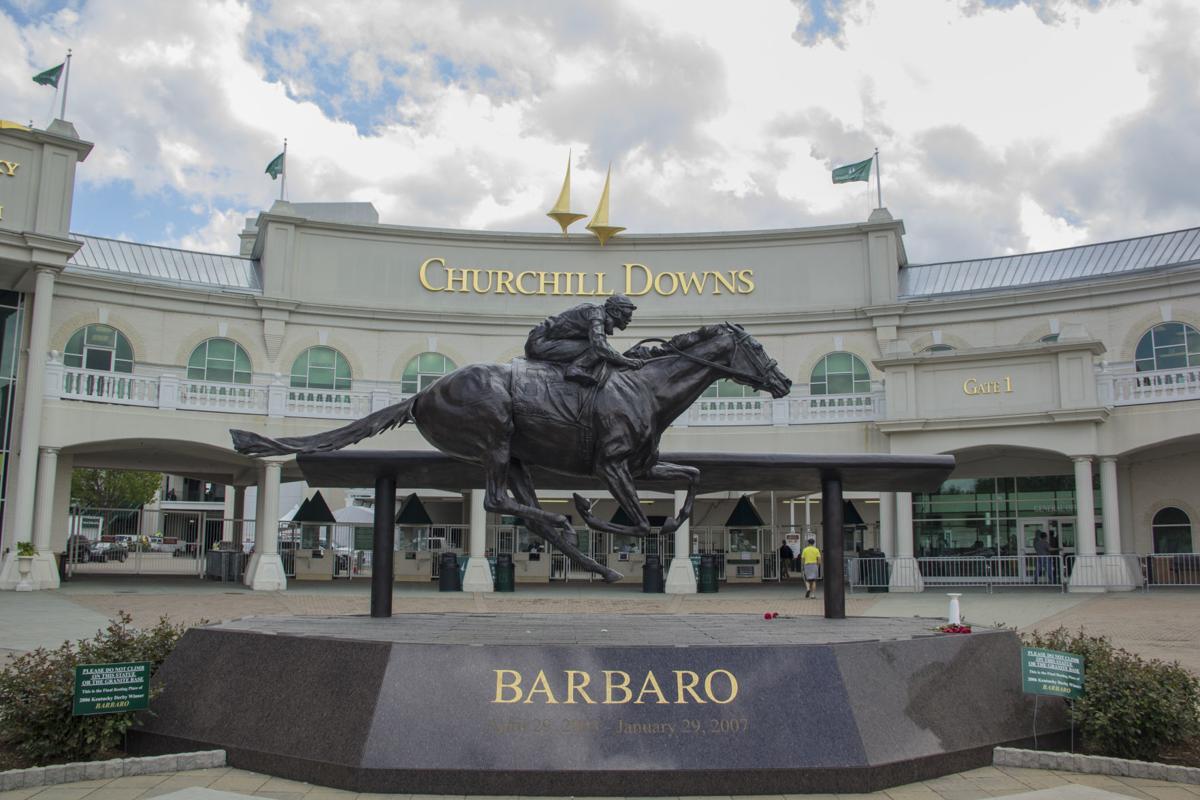 Artist Alexa King created the landmark "Barbaro" statue that stands outside Churchill Downs while living in Middleton. "All day long and into the evening you see people snapping pictures out in front of the statue," said Lindsay English, a spokeswoman for the Kentucky Derby Museum. 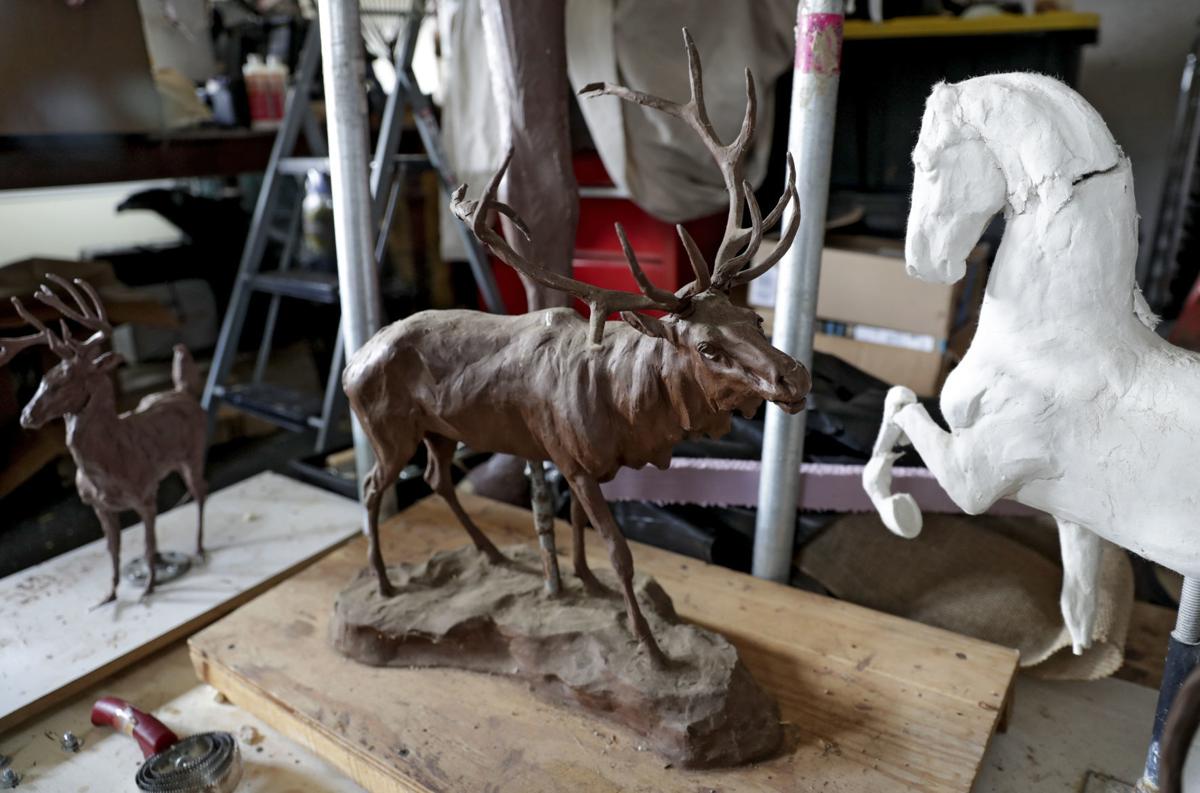 Alexa King's garage serves as her studio for sculptures. 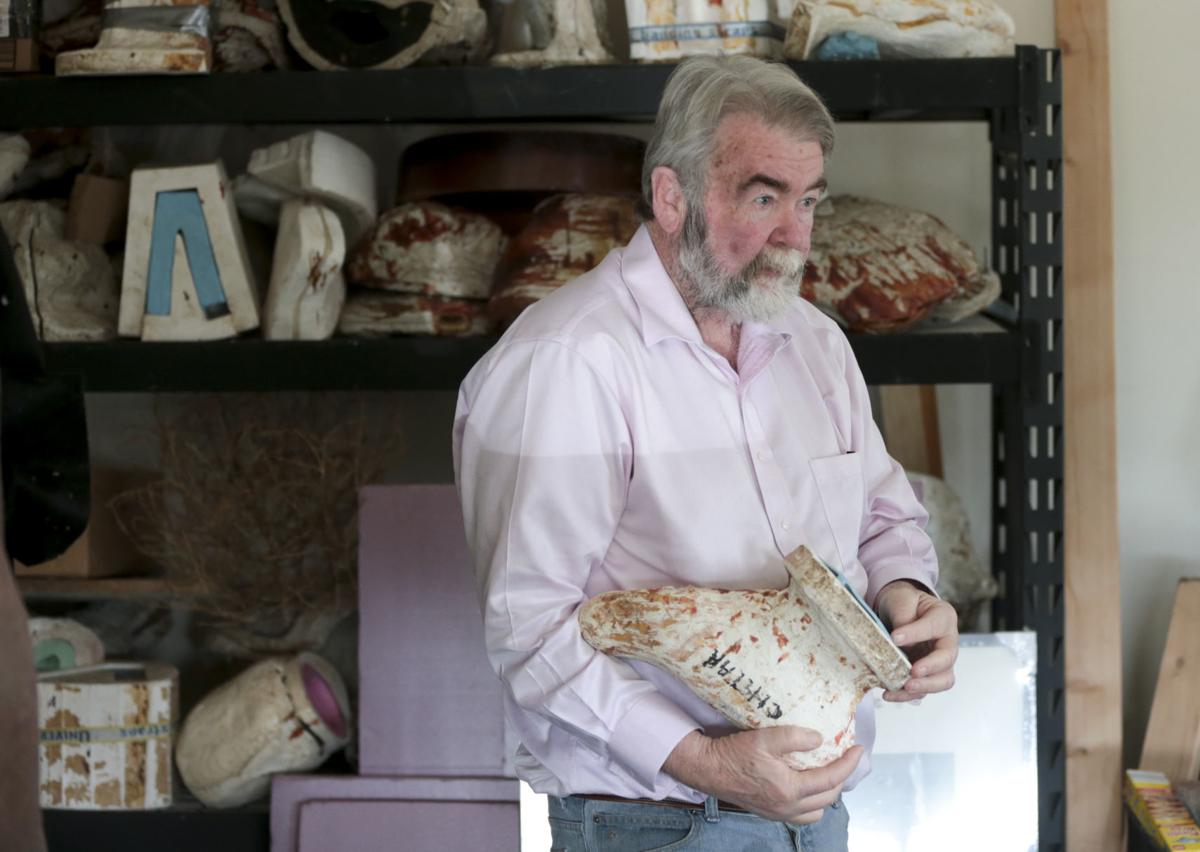 Eric Bolland carries a mold made from a sculpture by his wife, artist Alexa King, in their garage in Verona that also serves as her studio. 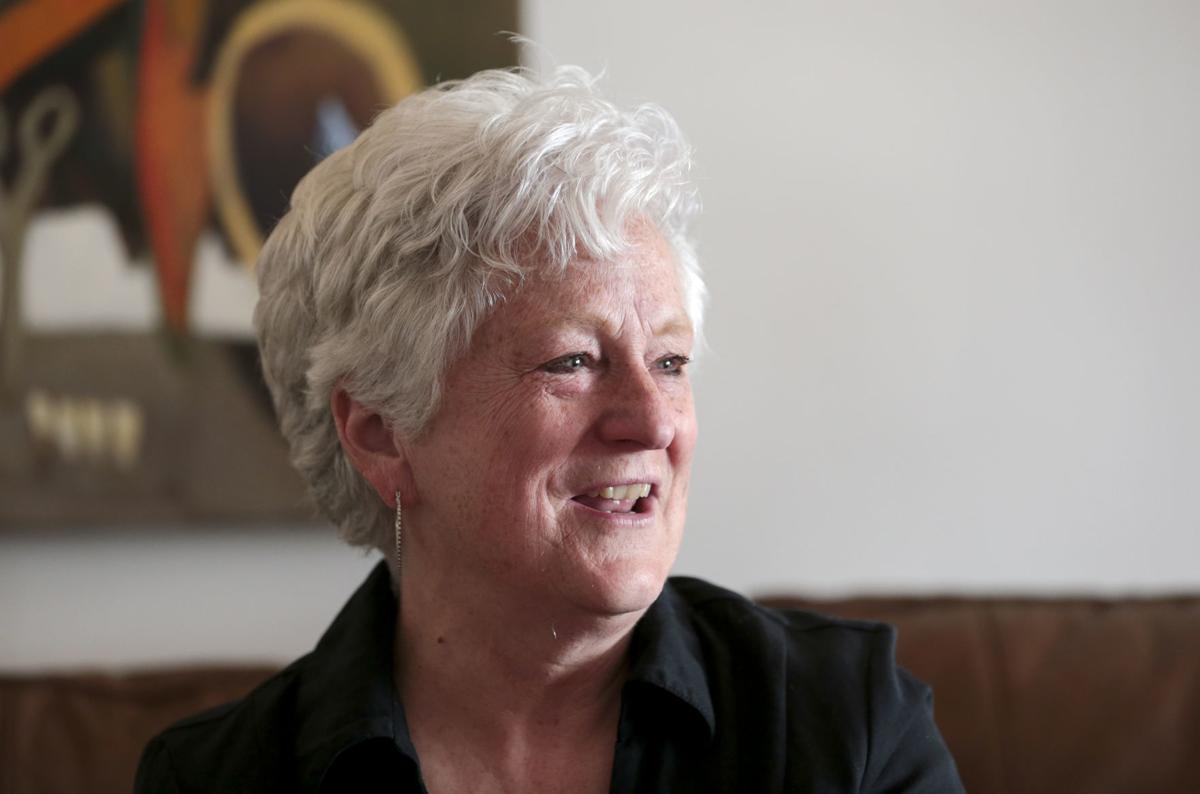 Alexa King has ridden and worked with horses since she was in third or fourth grade.