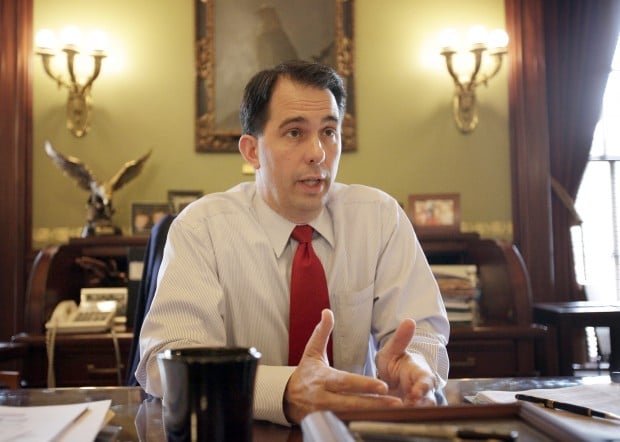 When states move up in the business rankings it can provide a nice sound bite for a governor but when states fall there is usually no press release. 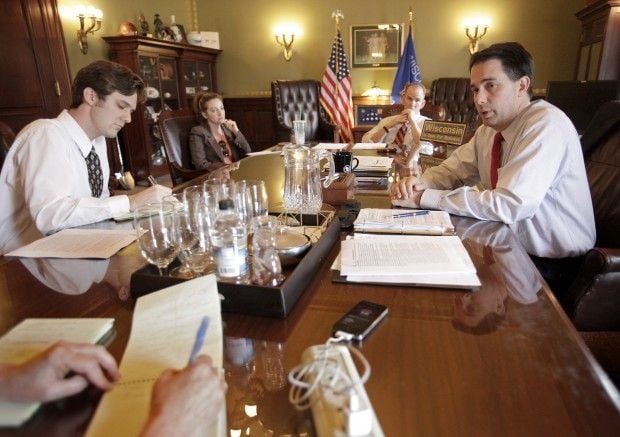 Gov. Scott Walker talks with Wisconsin State Journal reporters about his vetoes to the 2013-2015 state budget in his state Capitol office in Madison on Friday. In the background are the governor's spokeswoman, Jocelyn Webster, and chief of staff, Eric Schutt.

Bounty hunters are out, and investigative journalists can stay.

Republican Gov. Scott Walker planned to sign the $70 billion 2013-15 state budget Sunday in Pleasant Prairie, using his veto pen to remove or partially remove 57 items, up from 50 in the previous budget.

Among the vetoes, Walker will eliminate a provision that would have legalized private bail bond agents in five counties. He vetoed a more expansive proposal in the 2011-13 budget.

The state banned the practice more than 30 years ago because it resulted in corrupt practices. Law enforcement officials, including GOP Attorney General J.B. Van Hollen, opposed the measure, and Walker said he agreed with them that it should be removed.

He also will delete a clause added by the Legislature’s Joint Finance Committee that would have booted the Wisconsin Center for Investigative Journalism from the UW-Madison campus and prohibited faculty from collaborating with it.

Instead, he will ask the Board of Regents to review its policy on housing organizations such as the center, which gets office space from the UW-Madison School of Journalism and Communications in exchange for paid student internships and guest lectures.

“It’s appropriate for (the Regents) to look at it,” Walker said in an interview Friday with the State Journal. “But it should be done in the context of a larger policy, not just specific to one organization.”

In the interview, Walker called those his two biggest vetoes. The governor spoke on the condition that the newspaper not disclose the vetoes until Sunday, including to lawmakers or others who might comment.

The governor also plans to veto two last-minute changes to the statewide voucher expansion: One item would have allowed schools that currently participate in the Milwaukee and Racine voucher programs to enroll students outside of those districts in excess of the statewide program cap, which will be 500 next year and 1,000 the following year.

State Superintendent Tony Evers warned after the Assembly adopted the provision that those schools could open satellite locations around the state to circumvent the cap. Walker said the veto respects the deal he made with legislators regarding the voucher program, which includes the cap. It also cuts spending in the budget by $4.2 million.

The other voucher-related veto will eliminate a provision that would have required the state Department of Public Instruction to get a private voucher school’s permission to release certain information to parents, the public and journalists.

The budget includes a $650 million income tax cut; a limited statewide school-voucher expansion; a $250-per-pupil increase in funding for public schools over two years; and changes to the state’s Medicaid program that will cover all adults earning up to 100 percent of the federal poverty level — $11,490 a year for a single person — but require those living above it to enter private insurance exchanges.

Walker said he won’t alter those major pieces of the budget, which he introduced and the Republican-led Legislature modified.

Also in the budget is a two-year tuition freeze for the University of Wisconsin System. Walker retained that provision and will use his veto to freeze differential tuition, which some campuses charge for certain programs.

The governor planned to delete a freeze — sought by the Legislature — on fees that students can approve or turn down in campus elections.

Walker didn’t provide a complete list of vetoes but said many of the others relate to reports the Legislature required for certain programs. He also said he will cut a $200,000 stewardship fund earmark for an extension of Bearskin Trail in Lincoln County.

Democrats have criticized the state budget as anti-middle class because it cuts taxes paid by the wealthy, provides $30 million in tax deductions for private-school tuition, and rejects a federal Medicaid expansion that would have covered people earning up to 133 percent of the federal poverty level, or about $15,000 for a single person.

The budget leaves a $500 million hole for the 2015-17 budget. That structural deficit is lower than it has been in all but one of the budgets over the past 15 years.

“This budget is full of wrong decisions and misplaced priorities,” Democratic Party chairman Mike Tate said in a press release Friday in anticipation of Walker signing the budget. “Wisconsinites made clear in November that our priority is to build a stronger middle class with a fair tax structure that does not primarily benefit the wealthy, cause an expensive future deficit or sacrifice public education and health care.

“Scott Walker’s budget fails to meet those standards, and it fails the middle class.”

Walker said Democrats are “grasping at straws.” He said the public will appreciate the income tax cuts, the incentives for businesses to grow and to move here, the additional money for K-12 education and the UW tuition freeze.

“There’s a lot of things that will tremendously benefit the hard-working taxpayers of this state,” Walker said.

Other key elements and vetoes in the state budget to be signed Sunday by Gov. Scott Walker include:

— DNA: The budget limits analysis of DNA from people who have been arrested. It will allow police to collect DNA from anyone arrested on suspicion of a felony, but the material won't be analyzed until after a court determines there is probable cause of the person's guilt. Anyone convicted of a crime, including misdemeanors, would have to provide their DNA. The current law requires DNA samples only from convicted felons and sex offenders.

— Stewardship: The budget will scale back the state land preservation program further than Walker originally proposed.

— Junk food: A provision preventing local governments from limiting food and beverage serving sizes will remain, despite calls from health care groups for a veto. Restaurant and grocers backed that provision.

— State treasurer: The budget will eliminate nearly all the duties of the state treasurer's office, including its oversight of unclaimed property. A constitutional amendment doing away with the office, which would have to be approved by the Legislature in two consecutive sessions as well as by a vote of the people, is being circulated.

— Skyward: A provision designed to keep Stevens Point-based Skyward in the state by allowing for a multi-vendor contract to operate student information systems will remain. Walker wanted to give one company the contract for the whole state, but the Legislature caved to pressure from Skyward, which lost the original bid to a Minnesota company and threatened to leave the state and take its roughly 750 jobs with it.

— Kringle: The kringle will be Wisconsin's official state pastry. Three Republicans and three Democrats wrote to Walker, asking him to leave that in the budget because it "would put Racine and southeast Wisconsin on the culinary map." "Kringle for everyone," the governor joked.

Monsignor Jeffrey Burrill served as a priest in the diocese of La Crosse before becoming top administrator for U.S. Conference of Catholic Bishops.

The tobacco plant is used by Native Americans for ceremonial and cultural purposes.

Chantia Lewis served in the Air Force, works as a pastor and was elected to the Milwaukee City Council in 2016.

DPW hauled in about $4.2 million during the first half of the year.

The land purchase will be made through the Knowles-Nelson Stewardship Program, which the state uses to purchase new land for parks and recreation areas.

Comeback concerts announced amid rise in US cases

Top tips to keep you cool this summer

Top tips to keep you cool this summer

Watch the moment when a rat causes havoc in Andalusia's parliament

Watch the moment when a rat causes havoc in Andalusia's parliament

When states move up in the business rankings it can provide a nice sound bite for a governor but when states fall there is usually no press release.

Gov. Scott Walker talks with Wisconsin State Journal reporters about his vetoes to the 2013-2015 state budget in his state Capitol office in Madison on Friday. In the background are the governor's spokeswoman, Jocelyn Webster, and chief of staff, Eric Schutt. 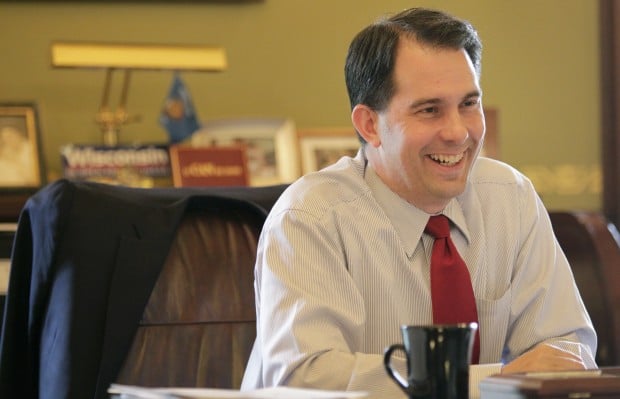