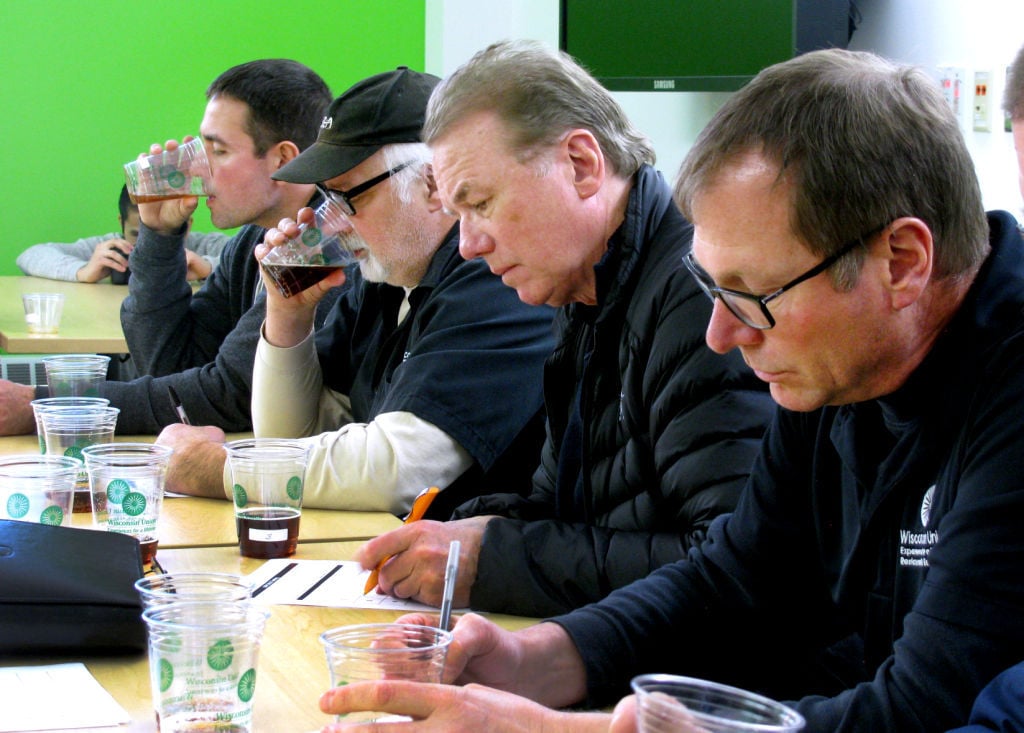 Judges, from left, Rob LoBreglio of the Great Dane Pub & Brewing Co., Kirby Nelson of Wisconsin Brewing Co., David Ryder of MillerCoors and Rob Gretzlock, manager at Der Rathskeller at Memorial Union, evaluate amber lagers developed by students at UW-Madison. The winning beer, called Inaugural Red, will be produced at Wisconsin Brewing Co. and served May 1 at the Memorial Union before being distributed throughout the state. 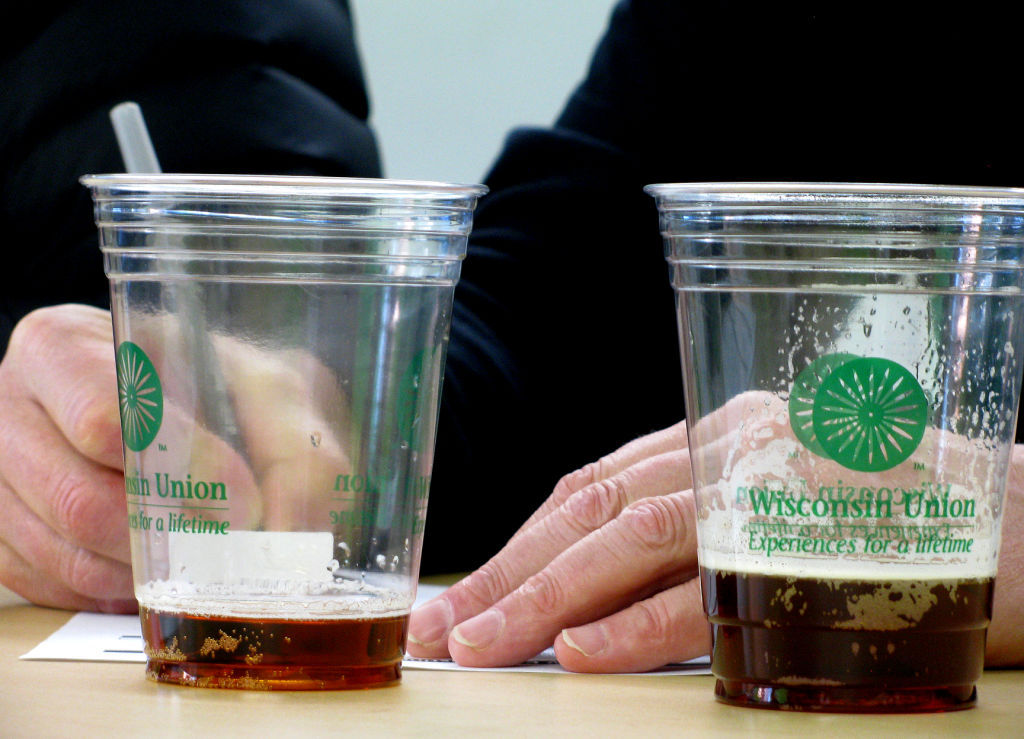 Six teams of three students each competed in the competition sponsored by Wisconsin Brewing Co. in Verona. 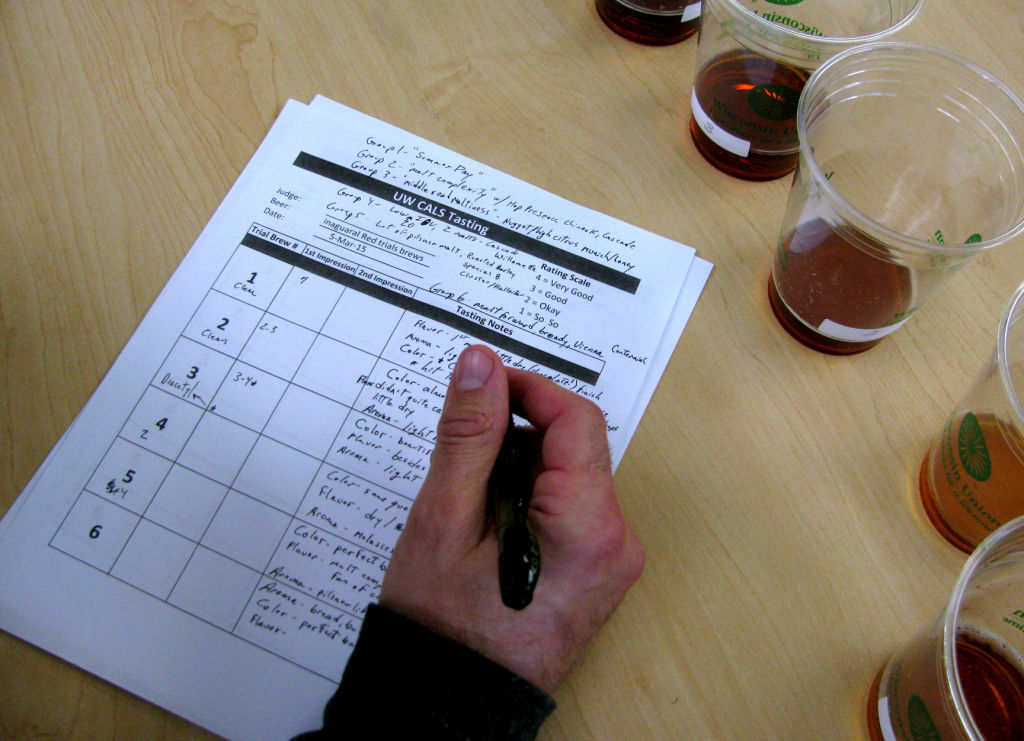 Beer was judged on a number of qualities including appearance, aroma, taste, feel and finish.

Ice cream won’t be the only indulgence developed at Babcock Hall and enjoyed on the Memorial Union terrace this spring.

An amber lager, created by a trio of UW-Madison students on a pilot brewing system in the Department of Food Science and the Center for Dairy Research, was selected Thursday as the winning brew in a competition to have a beer from the university commercially produced and distributed statewide by Wisconsin Brewing Co. in Verona.

The team of Andy Lefeber, Sean Hinds and Paige Wolff beat out five other teams that worked since late January to create what will be known as Inaugural Red from Campus Craft Brewery. Commercial production at WBC is scheduled to begin March 15 with the first pour May 1 at the Union.

“I’m pretty ecstatic,” said Lefeber, 22, a senior from New Holstein. “As undergrads, to have our beer throughout the state is pretty amazing.”

The university has been teaching fermentation for decades on products like soy sauce, yogurt, cheese and beer. A 15-gallon brewery designed by James Ryder was donated to the university in 2007 by what is now MillerCoors. It was initially housed in the microbiology department but for the last three years has shared space in an ice cream lab on the second floor of Babcock Hall.

University officials say the brewery will help prepare students for careers in brewing and in the future allow students to earn a certificate in brewing, something that could be in place by the 2016-17 school year. The collaborative program with Wisconsin Brewing Co. was announced in January and also is using students in marketing, graphic design and film production.

On Thursday, students watched as a panel of five judges tasted, swirled, smelled and eyeballed the entries numbered one through six. The panel included Ryder, vice president of brewing, research, innovation and quality at MillerCoors, Rob LoBreglio, corporate brewmaster for the Great Dane Pub & Brewing Co., and Kirby Nelson, co-founder and brewmaster at Wisconsin Brewing Co.

“They all have merit,” Nelson said. “I think they all did a good job.”

Nelson came up with a set of parameters for students to follow. Requirements included a specific yeast, an alcohol by volume of no more than 5.5 percent and that the beer must be red in color. The product also needed to be designed for the masses, not for a niche group of beer drinkers.

LoBroglio said he was also impressed by the beer made by students Adam Bartling, Nathan Elliott and Katherine Habbel and offered to brew their beer at his company, which includes two brew houses in Madison and one in Fitchburg.

“It was very eye-opening to me what you guys have done,” LoBroglio told the students. “The recipes were all well balanced. A lot of the criticism we had was splitting hairs.”

Nationally, craft beer accounts for 11 percent of beer production and grew by 18 percent in 2014.

Brewery rankings have a different look after rule change

D.G. Yuengling & Son and Minhas Craft Brewery, founded in 1845 in Monroe as the Joseph Huber Brewing Co., have made the list ranking the top 50 craft brewing companies after the Colorado-based Brewers Association last year adjusted its criteria that defines a craft beer company as small, independent and traditional.

Rockhound Brewing Co. will be built on the site of a former bakery and run by Nate Warnke, a homebrewer for the last 10 years.

New Glarus Brewing Co. is working on a plan to build a distillery. Production would likely begin next year.

Wisconsin Brewing Co. in Verona is teaming with UW-Madison for a collaborative brewing project while MATC works with Ale Asylum.

Craft beer booming in the Burbs

Places where discerning beer drinkers can try a variety of craft beers are becoming more prevalent in the suburbs around Madison.

The $11 million Verona brewery opens this week with big plans

Snow sweeps across the Great Lakes and into the Northeast

Judges, from left, Rob LoBreglio of the Great Dane Pub & Brewing Co., Kirby Nelson of Wisconsin Brewing Co., David Ryder of MillerCoors and Rob Gretzlock, manager at Der Rathskeller at Memorial Union, evaluate amber lagers developed by students at UW-Madison. The winning beer, called Inaugural Red, will be produced at Wisconsin Brewing Co. and served May 1 at the Memorial Union before being distributed throughout the state.

Six teams of three students each competed in the competition sponsored by Wisconsin Brewing Co. in Verona.

Beer was judged on a number of qualities including appearance, aroma, taste, feel and finish.