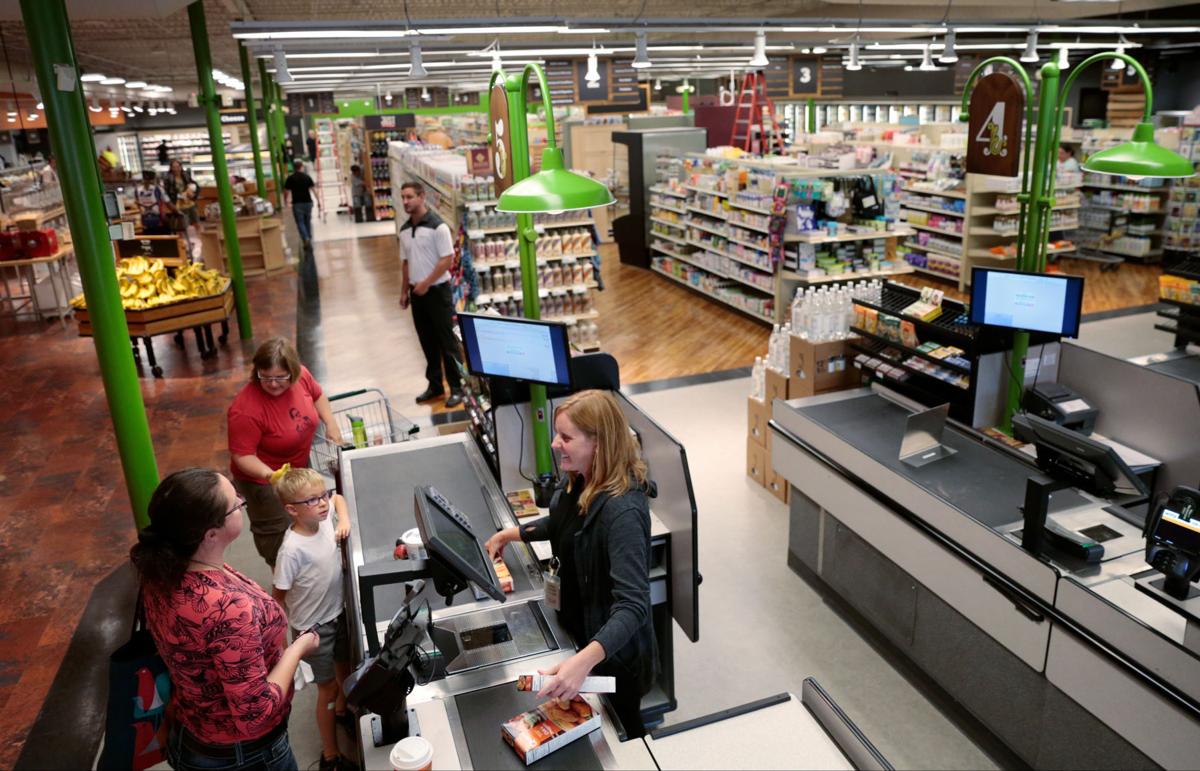 Front end supervisor Catherine Veith helps check-out customers, from left, Caeli Rice, Tara Schmidt, and Will Lentz, 7, of Madison at Willy Street Co-op's third store, at 2817 N. Sherman Ave. Veith has previously worked in the East and West Side locations and was on hand as the 20,000-square-foot North Side store opened Monday for the first time. 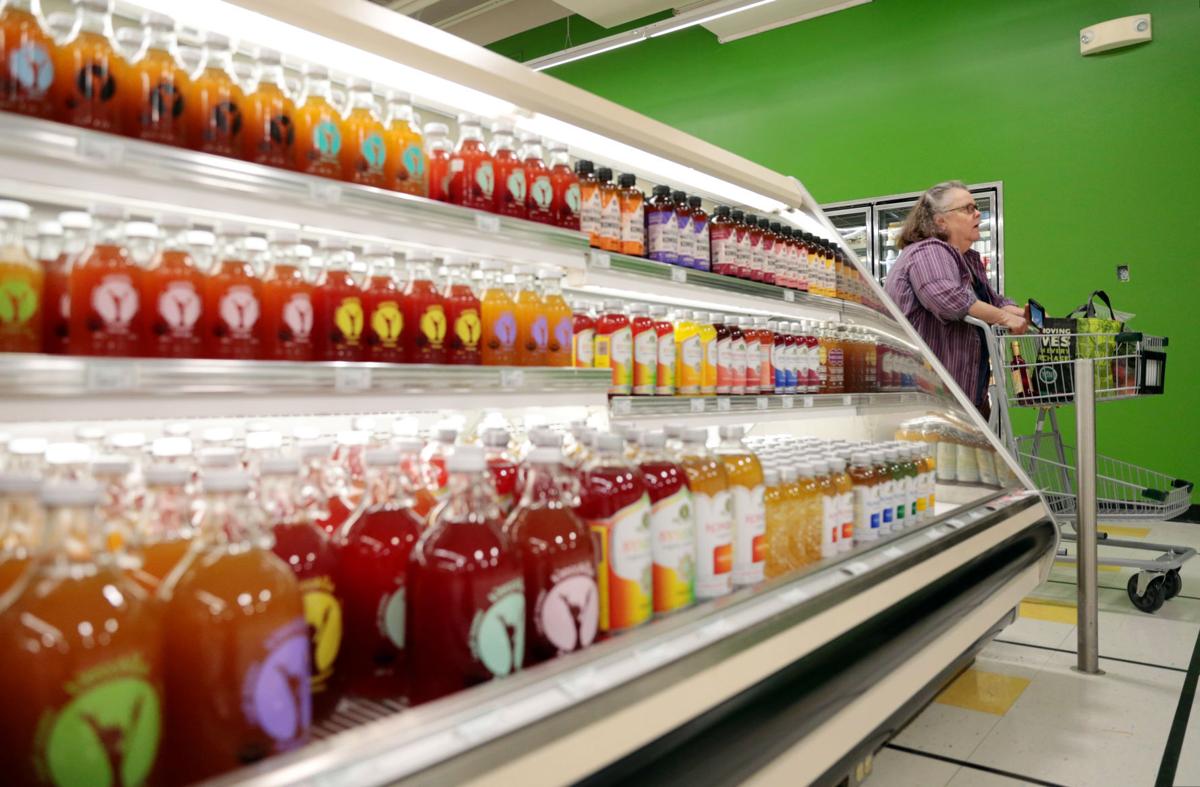 A shopper walks past the Kombucha selection at Willy Street Co-op, located in the NorthSide TowneCenter.

The North Side is no longer a food desert.

Those in search of fresh produce, a gallon of milk, a hunk of cheese and dozens of other staples now have a place to grocery shop. Willy Street Co-op, known for its organic and natural offerings, and with it, higher prices, opened its third store to a welcoming crowd Monday.

But the 20,000-square-foot location in the NorthSide TowneCenter across from Warner Park also has items not found in its 10,000-square-foot Middleton and Williamson Street stores. It’s all in an effort to cater to lower-income residents in the neighborhood after Pierce’s Northside Market closed in May.

You can still get bulk red wheat berries and coarse ground bulger, vegan lip baum and organically grown red bell peppers for $7.79 a pound. But the mainstream offerings include Shurfine eggs for 79 cents a dozen, Kellogg’s Pop Tarts for $2.79 a box and 32-ounce plastic bottles of Gatorade for $1.79.

The frozen foods section has Ore-Ida Tater Tots, Snickers ice cream bars and Shurfine frozen pizza. In the produce section, bananas can be had for 69 cents a pound.

“We’re able to offer a lot more products than we can in either of our other stores,” said store manager Jenny Skowronek, who had been at Willy West in Middleton the past six years. “It’s items at a more affordable price point and just broadening our selection, offering items that serve a broader community.”

The co-op announced in January that it was considering the North Side location at 2817 N. Sherman Ave. after Pierce’s announced it wouldn’t renew its 10-year lease. Pierce’s opened in 2006, three years after Kohl’s closed a nearby 50,000-square-foot grocery store.

Pierce’s closed the first week of May, which was about three weeks earlier than initially expected. Meanwhile, officials at the co-op realized that instead of needing two to four weeks to remodel it would instead take four to eight weeks to complete the $2.7 million project.

A coalition of business and community groups worked to provide a shuttle bus to other grocery stores outside of the neighborhood and to have some items sold at the Northside Farmers’ Market.

The opening of the co-op has put everything under one roof in the heart of the neighborhood.

Jan Smith has been a co-op member since 1975 and lives in the Cherokee neighborhood a few minutes to the north. She no longer needs to drive 20 minutes to Middleton or Williamson Street to shop at the co-op.

“This is a dream come true,” said Smith, whose family owned a grocery store in Highland when she was growing up. “For me, going to Willy Street (co-op) and shopping as part of a community is just intrinsic nature.”

The co-op, founded in 1974 and now with more than 33,000 members, completed a $4 million renovation of its Williamson Street store in 2014. In 2011, it spent $3.5 million to open its Middleton store. In 2014, co-op members approved pursuing a third site and earlier this month announced that a $1.5 million bond drive that began May 9 to finance the North Side store’s reconstruction was a success.

Mary Conroy was the first person to check out at the new store. She lives just four blocks away and purchased a cup of coffee and a lemon-blueberry vegan muffin.

“The parking here is just amazing,” Conroy said. “I think people have been looking forward to this for a long time, ever since Pierce’s closed.”

But the store is still a work in progress. The exterior facade is still under construction, some shelves need to be stocked while the beer and wine department won’t open until Aug. 22.

The store is working on an application so it can be part of FoodShare and WIC, the state’s supplemental nutrition program for women, infants and children, something not offered at the co-op’s other stores. In addition, the North Side store will feature pallet sales of non-perishable staples, something scheduled to begin next month

The three-day event started Friday and features some of the best cheese in the world, including the winner of the World Championship Cheese Contest.

A saturated grocery market has made it difficult for developers to find a grocer for the development at East Washington Avenue and Milwaukee Street.

The co-op's membership is voting a on a plan to expand the Middleton store and on the creation of a possible fourth store or upgrade to its production kitchen.

Proposed housing for Madison's North Side gets smaller, smarter

A developer is downsizing, relocating and making more environmentally friendly a proposed housing project planned for a North Side shopping center.

Front end supervisor Catherine Veith helps check-out customers, from left, Caeli Rice, Tara Schmidt, and Will Lentz, 7, of Madison at Willy Street Co-op's third store, at 2817 N. Sherman Ave. Veith has previously worked in the East and West Side locations and was on hand as the 20,000-square-foot North Side store opened Monday for the first time.

A shopper walks past the Kombucha selection at Willy Street Co-op, located in the NorthSide TowneCenter. 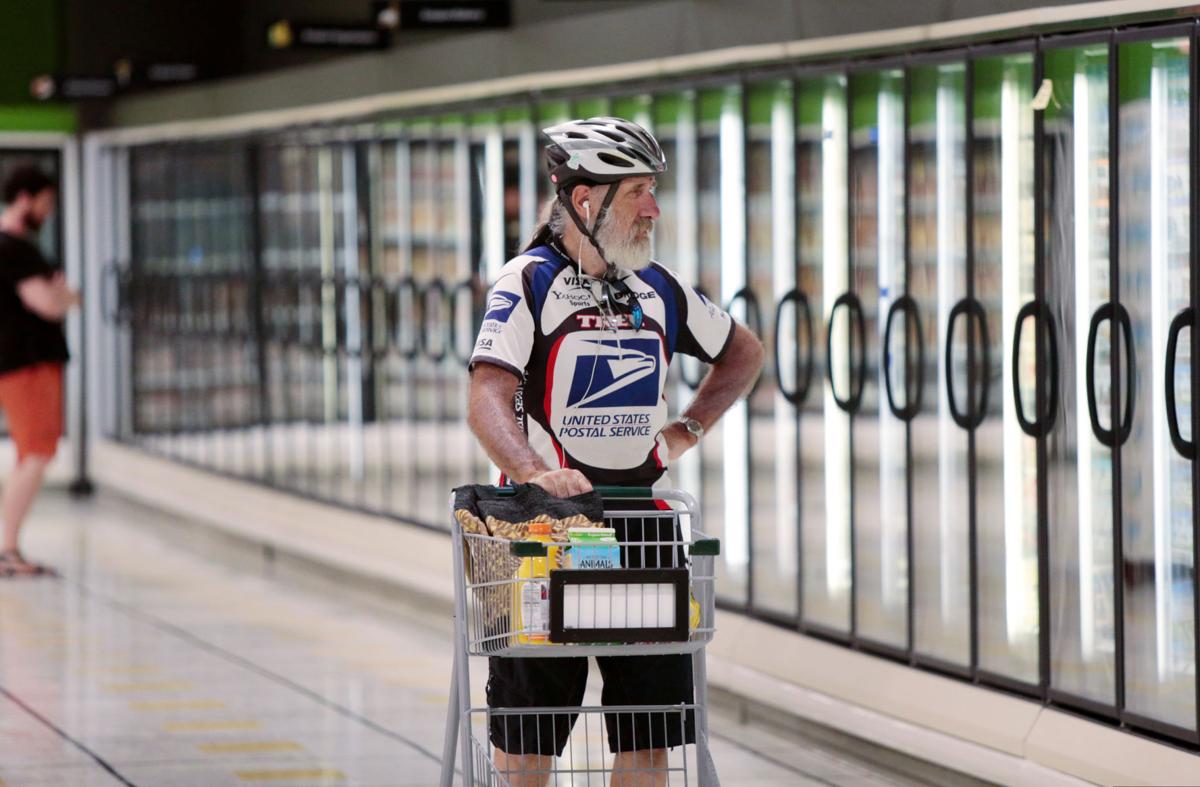 Alan West of Madison peruses the frozen foods section while shopping at Willy Street Co-op's third store on the North Side of Madison. 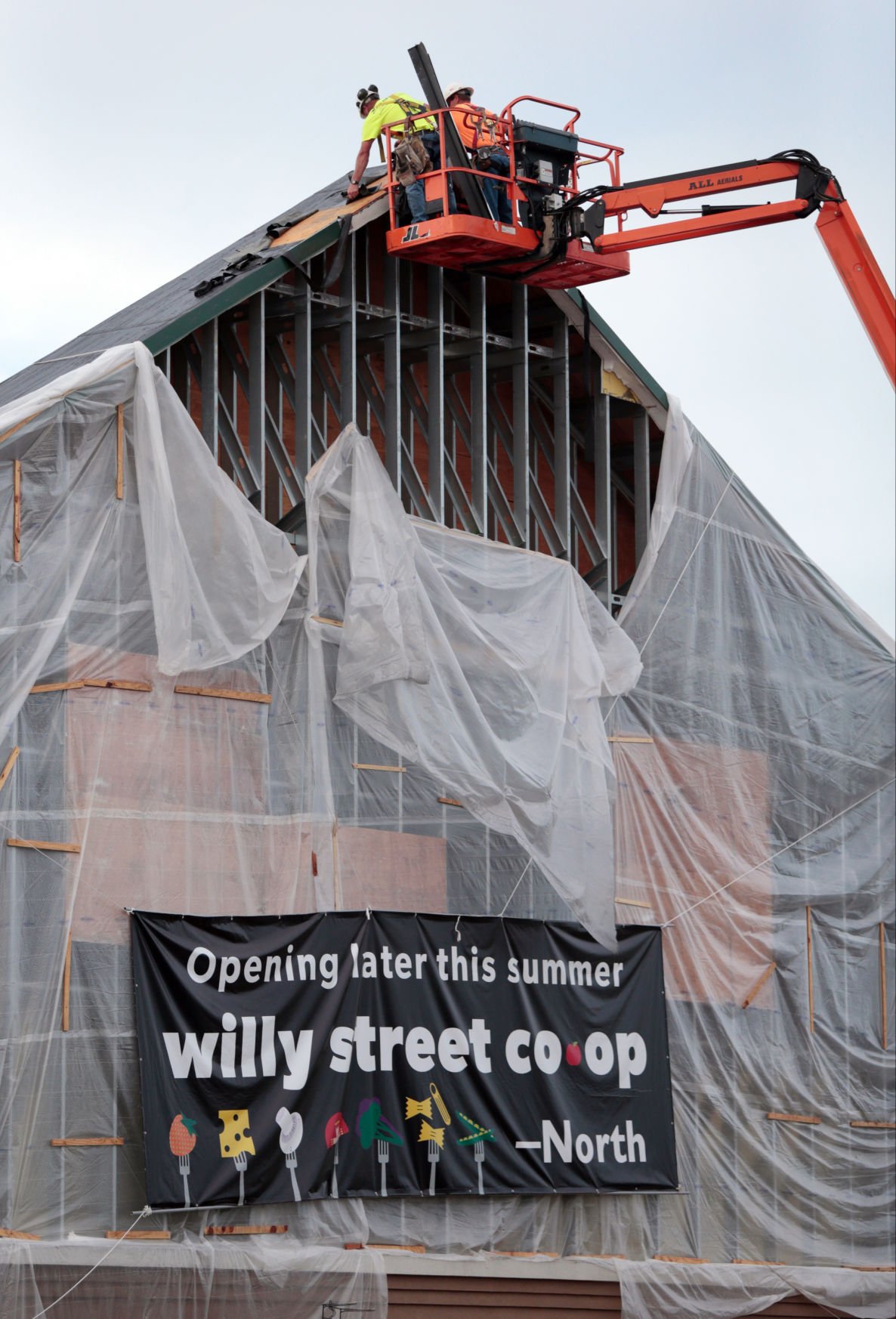 Construction on the front facade continues at Willy Street Co-op, located across from Warner Park. 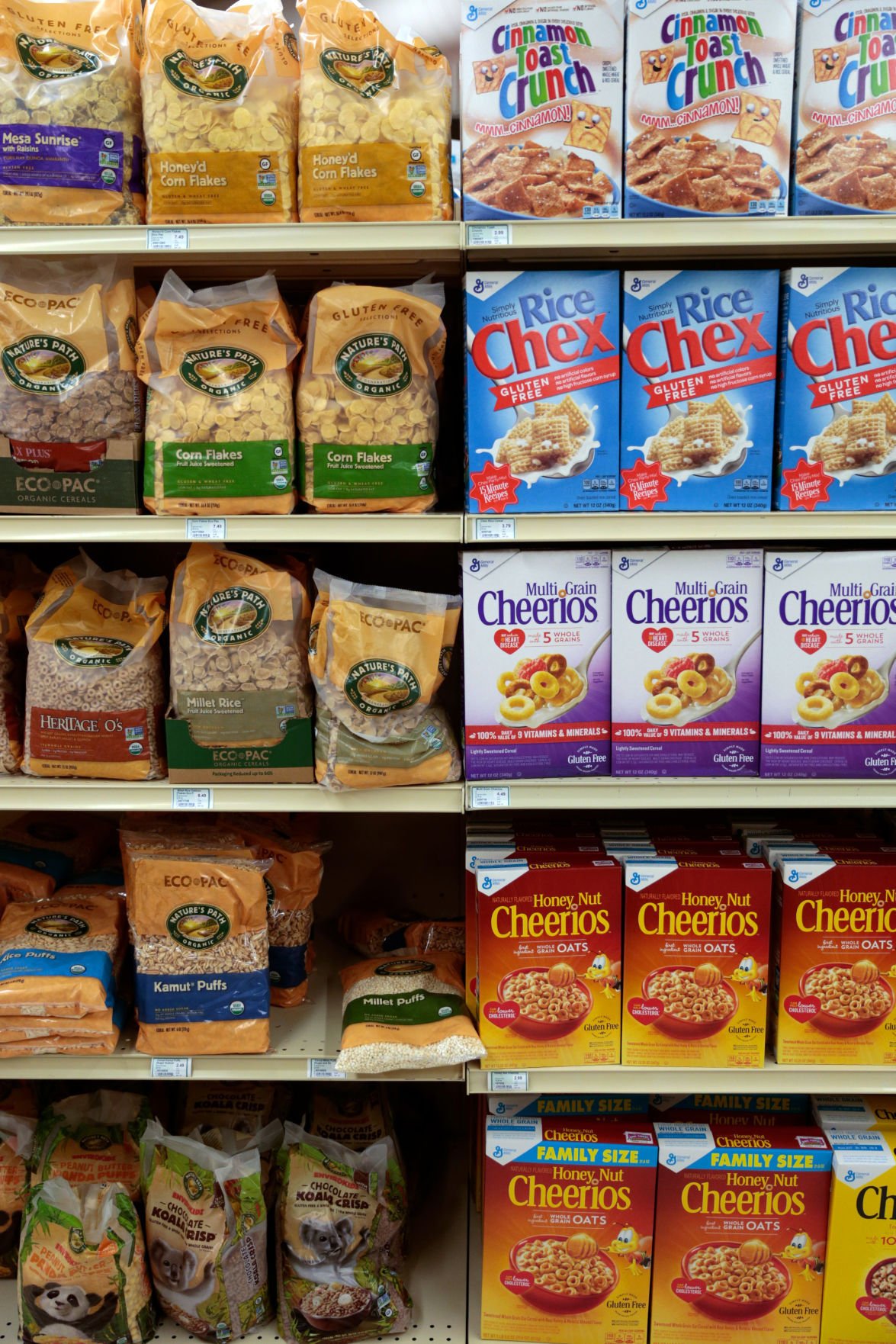 Both organic, left, and conventional cereals are sold at Willy Street Co-op's 20,000-square-foot store on the North Side. The change is an attempt to cater to the neighborhood residents who were left without a grocery store i May when Pierce's Northside market closed. 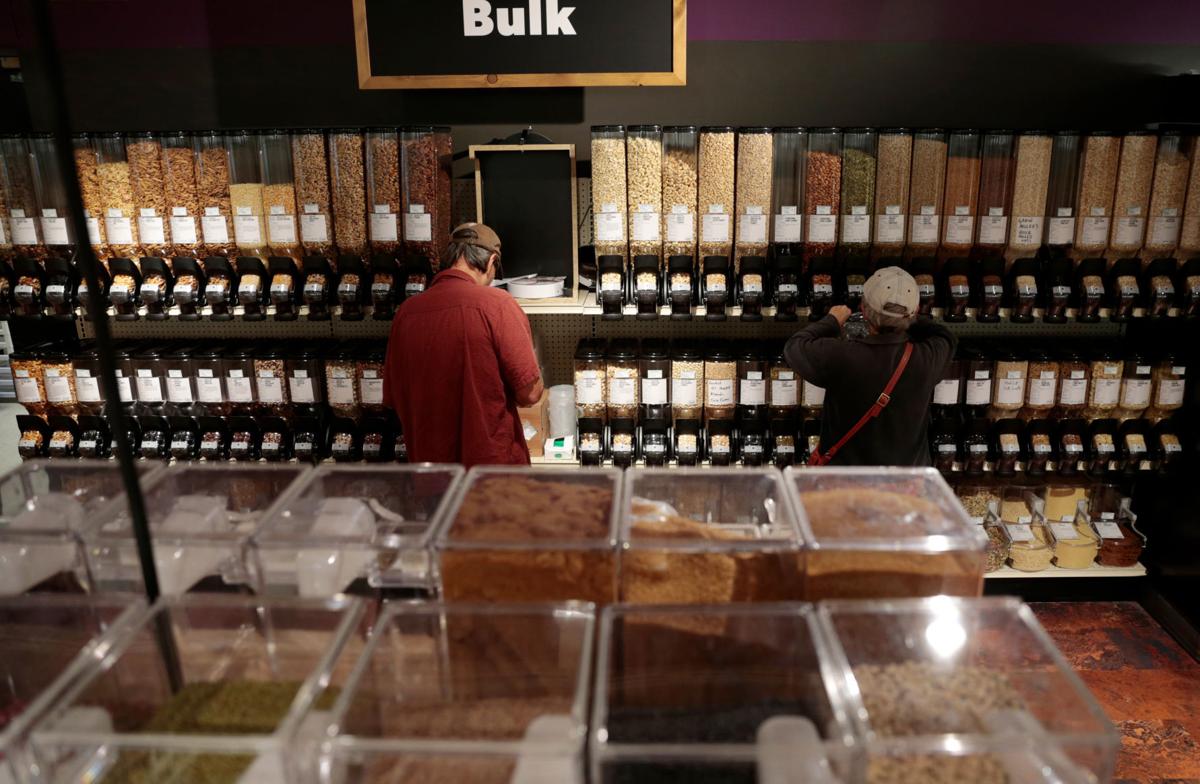 Shoppers select from the bulk foods section at Willy Street Co-op. Unlike the co-op's other two stores, the North Side store that opened Monday also includes mainstream grocery products. 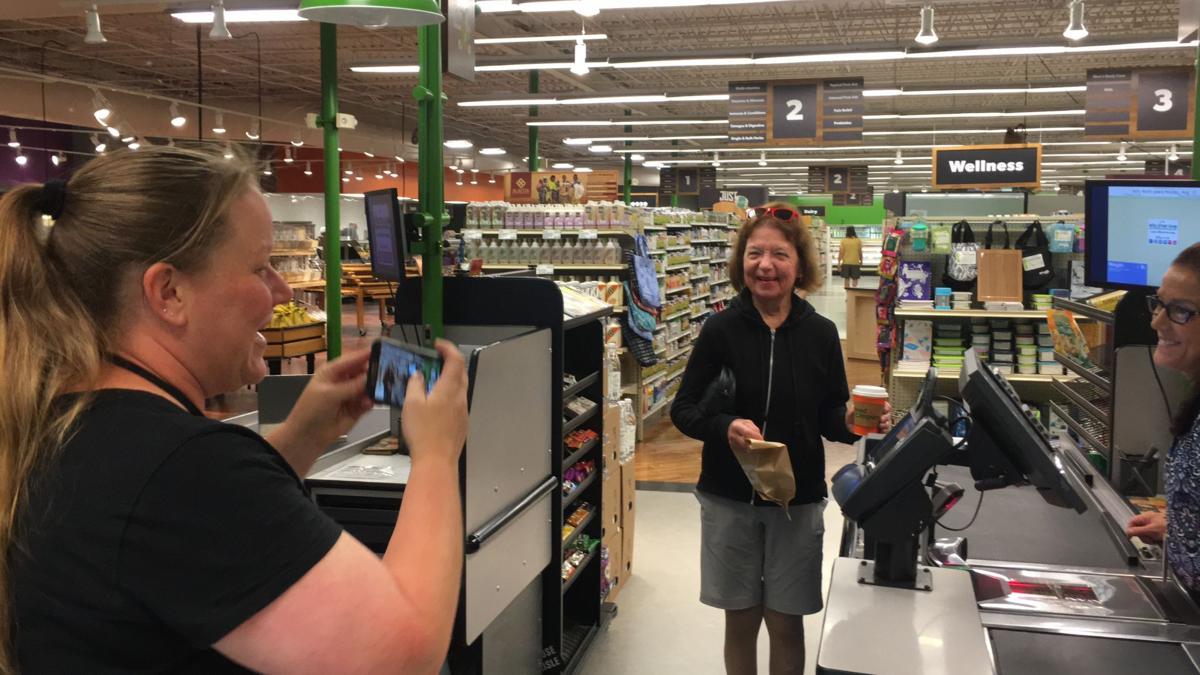 Jenny Skowronek, manager of Willy Street Co-op North, take a photo of Mary Conroy, the first person to check out of the store shortly after it opened Monday. Conroy, who lives just four blocks away, has been a co-op member for more than 25 years.