The tears came quickly Monday for Tracy Punsel as she watched the morning news.

While the Cambridge woman slept, Ingenuity, the helicopter on Mars that holds a computer chip developed in part by her late brother, lifted off from the Martian surface.

The 39-second flight by NASA’s experimental helicopter marked the first powered flight by an aircraft on another planet. Hailed as a Wright Brothers moment, the 4-pound aircraft carried a bit of wing fabric from the Wright Flyer that made similar history at Kitty Hawk, North Carolina, in 1903.

“Altimeter data confirms that Ingenuity has performed its first flight, the first flight of a powered aircraft on another planet,” said the helicopter’s chief pilot back on Earth, Havard Grip, his voice breaking as his teammates erupted in applause.

It was a brief hop but accomplished all the major milestones.

Project manager MiMi Aung was jubilant as she ripped up the papers holding the plan in case the flight had failed.

“We’ve been talking so long about our Wright Brothers moment, and here it is,” she said.

But for Punsel, Monday’s flight flooded her with emotions and with thoughts about her brother, Jim Willmore, a Madison native who worked at Qualcomm Technologies in San Diego. He died in 2019. Willmore helped design the processor that serves as the heart and brains of the helicopter. NASA scientists tried to replicate the Mars atmosphere in tests on Earth but Monday’s successful flight made history and brought relief.

“For it to take flight is just huge,” Punsel said. “I just cried. It’s such an important thing to my family.”

Willmore’s mother, Betty Willmore of Cambridge, died April 8 but had undergone chemotherapy in early 2020 so she could see the Atlas V rocket carrying Perseverance, the Mars rover that held Ingenuity in its belly, blast off from Earth in February. She also lived to see Perseverance and Ingenuity land in the 28-mile wide Jezero Crater.

For Monday’s flight, controllers at NASA’s Jet Propulsion Laboratory in California declared success after receiving the data and images via the rover. The $85 million helicopter demo was considered high risk, yet high reward. Scientists cheered the news from around the world and even from space.

“A whole new way to explore the alien terrain in our solar system is now at our disposal,” Nottingham Trent University astronomer Daniel Brown said from England.

Ground controllers had to wait more than three excruciating hours before learning whether the pre-programmed flight had succeeded more than 170 million miles away. Parked about 211 feet away at Van Zyl Overlook during Ingenuity’s flight, the Perseverance rover acted as a communications relay between the helicopter and Earth and chronicled the flight operations with its cameras. The pictures from the rover’s Mastcam-Z and Navcam imagers will provide additional data on the helicopter’s flight.

When the news finally came, the operations center filled with applause, cheers and laughter. More followed when the first black-and-white photo from Ingenuity appeared, showing the helicopter’s shadow as it hovered above an area of Mars now referred to as Wright Brothers Field.

Next came stunning color video of the copter’s clean landing, taken by Perseverance, “the best host little Ingenuity could ever hope for,” Aung said in thanking everyone.

To accomplish the flight, the helicopter’s twin, counter-rotating rotor blades needed to spin at 2,500 revolutions per minute — five times faster than on Earth. With an atmosphere just 1 percent the thickness of Earth’s, engineers had to build a helicopter light enough — with blades spinning fast enough — to generate such otherworldly lift.

More than six years in the making, Ingenuity is just 19 inches tall, a spindly four-legged chopper. Its fuselage, containing all the batteries, heaters and sensors, is the size of a tissue box. The carbon-fiber, foam-filled rotors are the biggest pieces: Each pair stretches 4 feet tip to tip.

Ingenuity also had to be sturdy enough to withstand the Martian wind and is topped with a solar panel for recharging the batteries, crucial for surviving the minus-130 degree Fahrenheit Martian nights.

“While these two iconic moments in aviation history may be separated by time and 173 million miles of space, they now will forever be linked,” NASA’s science missions chief Thomas Zurbuchen announced.

Up to five increasingly ambitious flights are planned, and they could lead the way to a fleet of Martian drones in decades to come, providing aerial views, transporting packages and serving as lookouts for human crews. On Earth, the technology could enable helicopters to reach new heights, doing things like more easily navigating the Himalayas.

Ingenuity’s team has until the beginning of May to complete the test flights so that the rover can get on with its main mission: collecting rock samples that could hold evidence of past Martian life, for return to Earth a decade from now. The team plans to be increasingly daring until Ingenuity’s final flight, testing its limits and possibly even wrecking the craft, leaving it to rest in place forever, having sent its data back home.

For Punsel, the mission is close to her heart.

Her brother, Jim Willmore, who was 63 when he died, grew up in Madison, graduated from Malcolm Shabazz High School and then UW-Madison with an engineering degree before heading to California to work in the telecommunications industry. His last 21 years were with Qualcomm as a senior director of engineering. An avid biker, he died from a medical incident during a training ride. His name, and those of others who worked on the processor, are inscribed on the helicopter.

Punsel has been tracking the helicopter’s journey and plans to continue to monitor its mission on Mars. She has signed up for alerts from NASA and watches online briefings.

“That’s how I’ve been following it,” said Punsel, a business analyst at CUNA Mutual Group in Madison. “It’s such an important thing.”

The COVID-19 pandemic brought the most challenging year in history to Wisconsin's tourism industry, but destinations adapted to help ease the economic pain.

Abnormal cold, snow showers will have southern Wisconsin shivering until later in week

Southern Wisconsin will see some snow showers as highs barely crack 40 and lows fall below freezing before warmer weather arrives Thursday, according to forecasters. 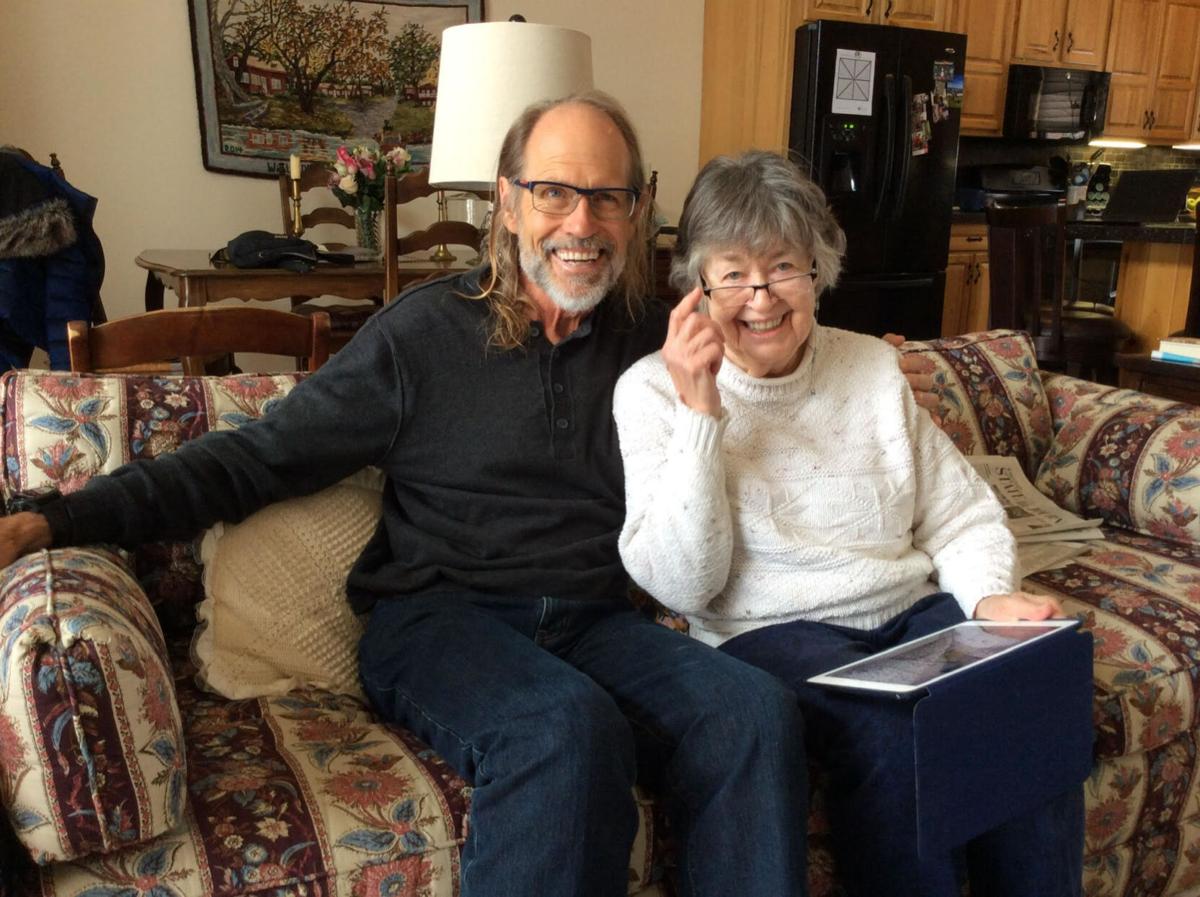 Jim Willmore, who helped develop the chip that controls the Ingenuity helicopter, with his mother, Betty. 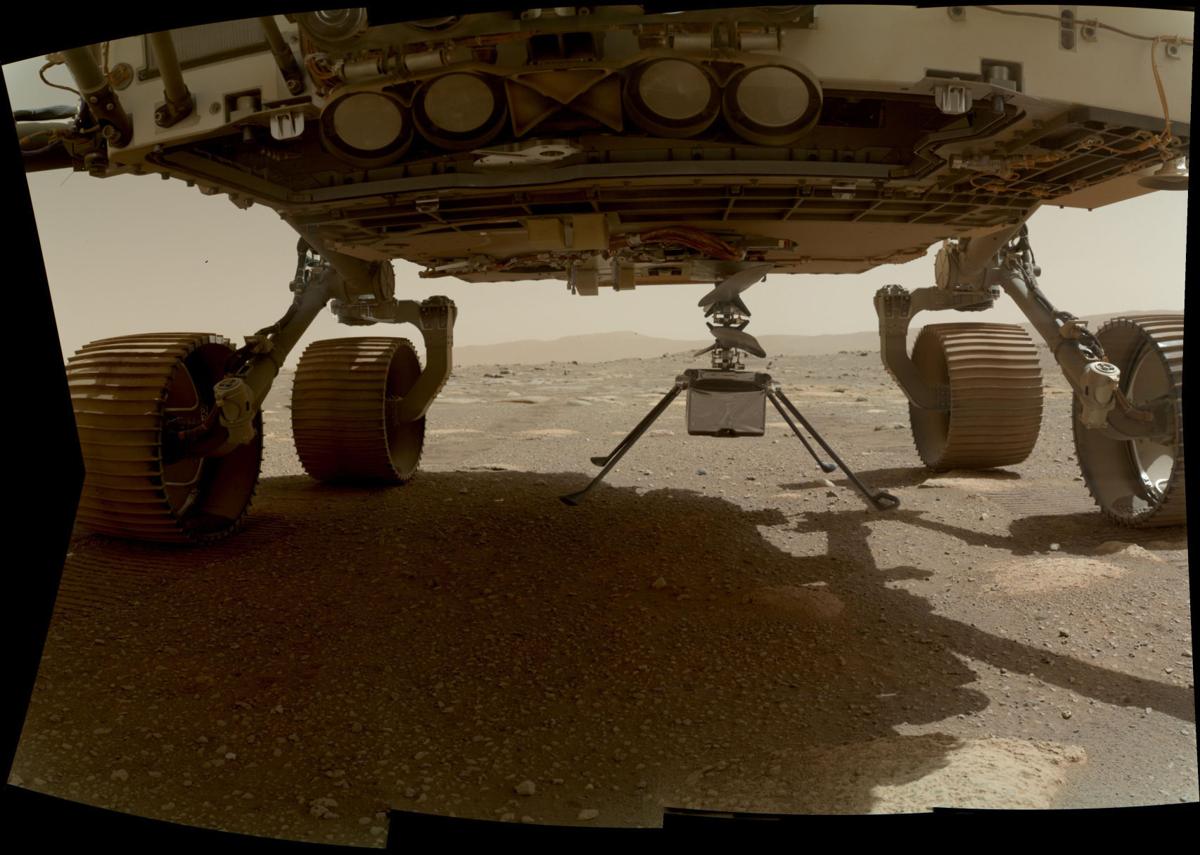 NASA's Ingenuity helicopter can be seen here with all four of its legs deployed before dropping onto the surface of Mars from the belly of the Perseverance rover on March 30.