Watch now: A fish monger realizes his dream as seafood comes to Monroe Street
0 Comments
Share this
1 of 2 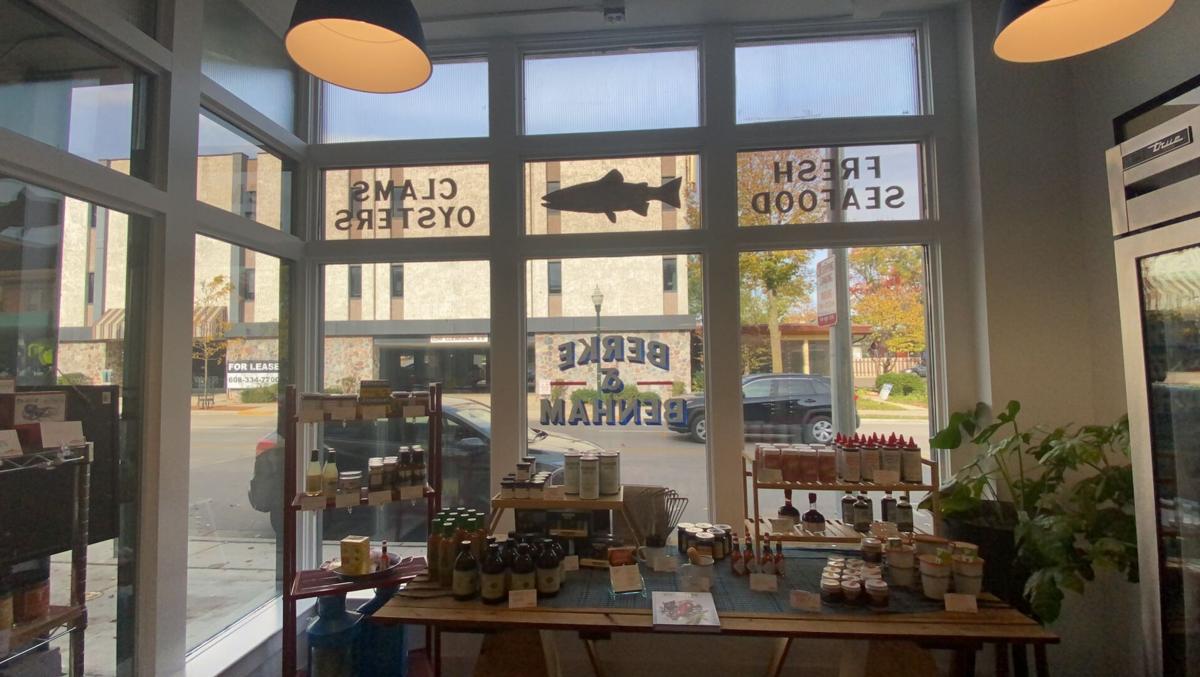 The small grocery area of Berke & Benham Seafood Market may soon be expanding. 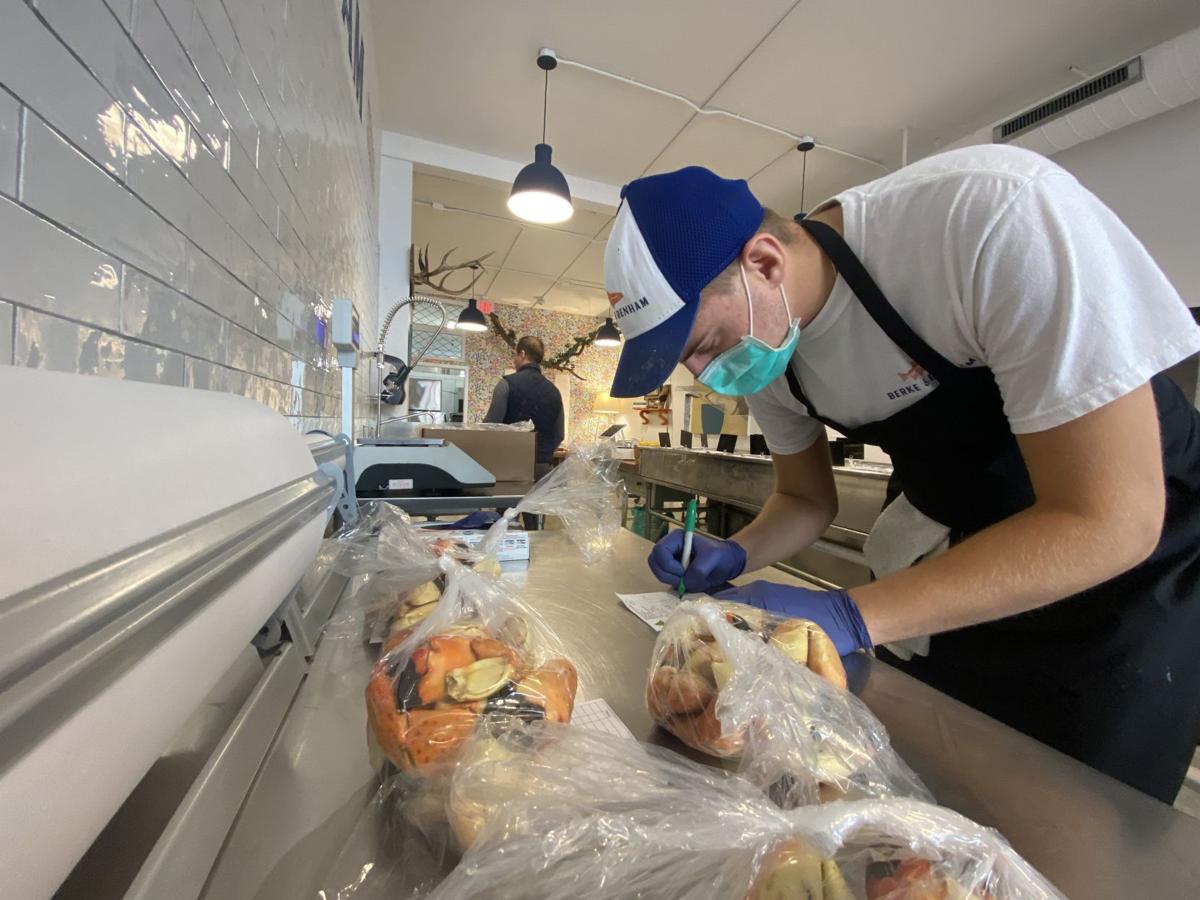 James Brown fills out slips for customers who have ordered fresh stone crab caught in Florida. The claws are among the most expensive items in the seafood industry. These claws were being sold for $42 a pound, but are known for their sweet taste.

Selling educational software to corporations is in the rearview mirror for Jim Berke.

His days are now filled with fillets of cod, salmon and cobia, steaks of swordfish and bags of oysters, stone crab and shrimp.

And while there are other places in the city to buy fresh seafood, Berke believes there’s more room in the marketplace for a stand-alone seafood store in Madison.

That’s why he opened Berke & Benham Seafood Market at 1925 Monroe St. The 2,000-square-foot shop is in an affluent neighborhood, near thousands of international students and faculty at UW-Madison and is on a commuting route for some of the 9,500 employees who work at Epic Systems in Verona but live in Madison.

Berke is not dissuaded by the seafood offerings that can be found at grocery stores like Metcalfe’s Market, Hy-Vee, Festival Foods and Whole Foods Market, the Seafood Center on Whitney Way or any number of smaller stores that cater to an international clientele.

“I don’t know if there’s a separation of us, but there’s plenty of space for all of us,” Berke said. “Madison is a great food town with a wide-ranging palate.”

Unlike Lake Edge Seafood Co. on Monona Drive, which has a seafood counter and a restaurant, Berke & Benham’s revenue is primarily derived from those looking to cook at home. However, Berke has plans for an oyster bar and has just begun selling wine, beer and ciders to take home.

He also wants to expand his small grocery section at the front of the store. The inventory includes pickled vegetables and tins of mackerel, sardines, tuna and octopus from Spain; cookbooks; and a variety of domestic and international seasonings. That lineup includes offerings from The Deliciouser, a Madison-based company that creates small-batch spice blends, salts and peppers.

Berke, who opened the doors of his shop in June between Brasserie V and the Good Day Shop, also wants to create his own line of seasonings, sell homemade chowder and fish stock and use the expansive back room of the business for special events; classes in butchering whole fish and shucking oysters; private dinners; and tastings that revolve around seafood and wine.

“Our shop is for any consumer who wants to buy fresh seafood, learn about fresh seafood and (learn) how to cook it,” Berke said. “I’m fascinated by the ocean. I love the thought of being good stewards of a vital part of the planet.”

Berke grew up in the northwest suburbs of Chicago, where he and his brother would fish often on the Fox River and at a nearby pond for bluegill and catfish. He graduated from the University of Illinois-Chicago with a biology degree but ditched his corporate job in 2017 to purse his longtime dream of becoming a fish monger. He’s also following in the footsteps of his entrepreneurial father, who created his own janitorial service company after World War II.

Jim Berke’s first gig was at the fish and meat counter at Eataly Chicago, an Italian market on East Ohio Street in the city’s downtown. But after about six months he took a retail position with Wabash Seafood, one of the city’s most well-established fish wholesaling companies. That’s where Berke immersed himself in the seafood culture and became schooled in the nuances of the industry after Wabash created a retail shop.

“It hasn’t been that long, but the people that I worked with at Wabash, they were fountains of knowledge,” Berke said. “They had no problem teaching me the technical skills ... but also vendor relationships.”

But when the pandemic came crashing down, Berke lost his job and retreated from Chicago with his family to their home on 25 acres between Mount Horeb and New Glarus. His wife works for a Chicago-based public relations firm and they have five adult children from previous marriages. The seafood shop is a combination of Berke’s last name and his mother-in law’s maiden name.

The fish in the shop come from suppliers in Chicago, Boston and elsewhere around the country that bring in wild-caught and farm-raised fish from around the world. On Wednesday the offerings on ice in the display case included fillets of yellowfin tuna, lane snapper, ocean trout, littleneck clams, gulf shrimp, scallops and Faroe Island salmon. Berke also sells wild whitefish, lake trout and walleye from Lake Superior, had just received a shipment of whole cod and stone crab, and had a walk-in cooler filled with whole halibut, monk fish and yellowtail kingfish.

“I’ve wanted to work in this business for many, many years, and if I didn’t do it now I would never do it,” Berke said. “So I took the leap.”

After a 31 year career, Brian Branch has retired as president and CEO of the Madison-based World Council of Credit Unions, a position that took him around the world.

The massive expansion will add more production space and, across the street, create a 200,000-square-foot warehouse, distribution and office facility.

After nice Halloween weekend, coldest weather of season will have southern Wisconsin shivering next week

It will be cold enough for snow next week for southern Wisconsin, but little precipitation is expected, according to forecasters.

On Retail: Isthmus Hardware seeks help in the midst of COVID-19 and street reconstruction

The store at West Washington Avenue and South Bedford Street is approaching its one year anniversary and has launched a fundraising campaign to help it pay its debts.

Springs Window Fashions completes expansion and gets a new owner

The Middleton company has undergone a $15 million expansion and remodel of its corporate headquarters and has just been purchased by Clearlake Capital Group.

The company, founded in 1913, has moved from Madison's East Side to more modern facilities to accommodate its growth and to complete its integration with General Heating & Air Conditioning.

More shoppers are expected to return to brick-and-mortar stores and there are scores of businesses and events to welcome them in Dane County. 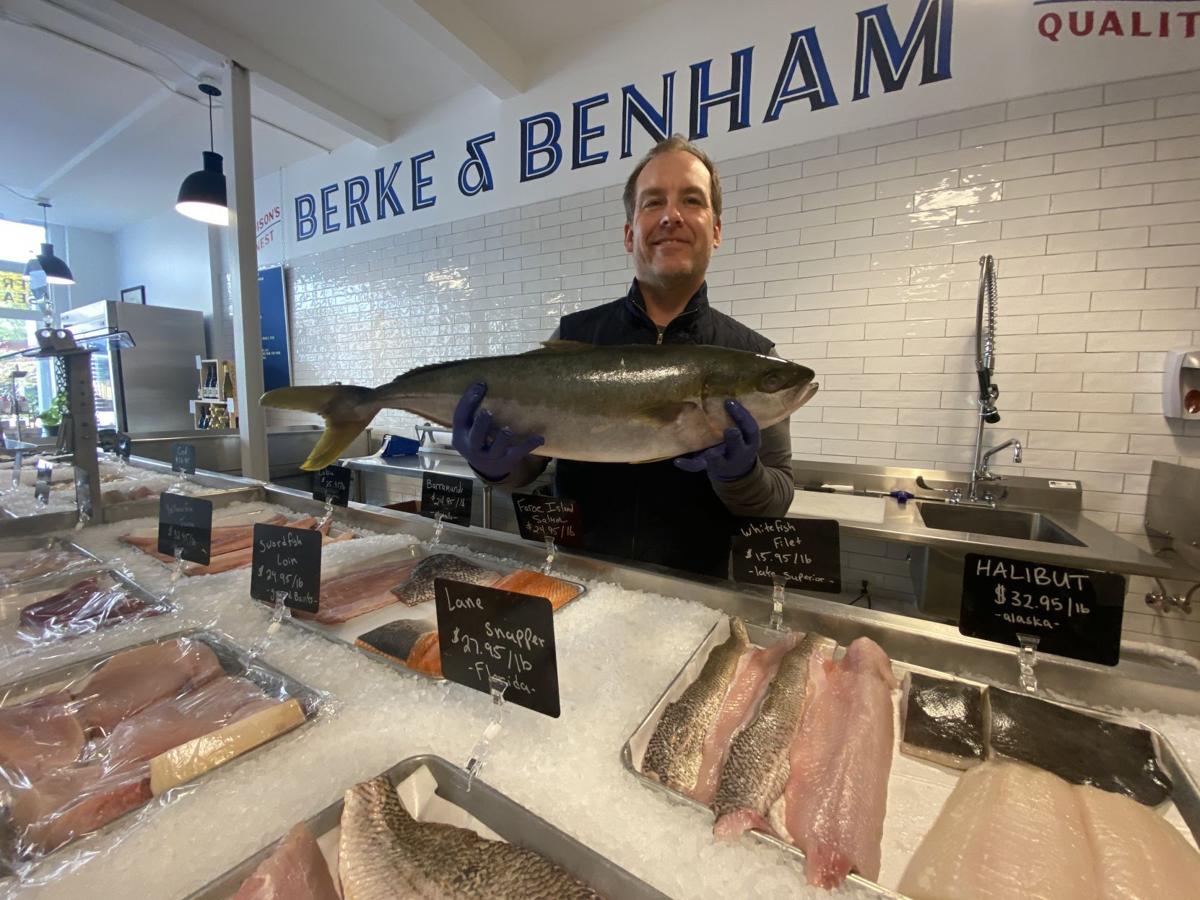 Jim Berke shows off a yellowtail kingfish inside Berke & Benham Seafood Market, a shop he opened in June on Monroe Street. 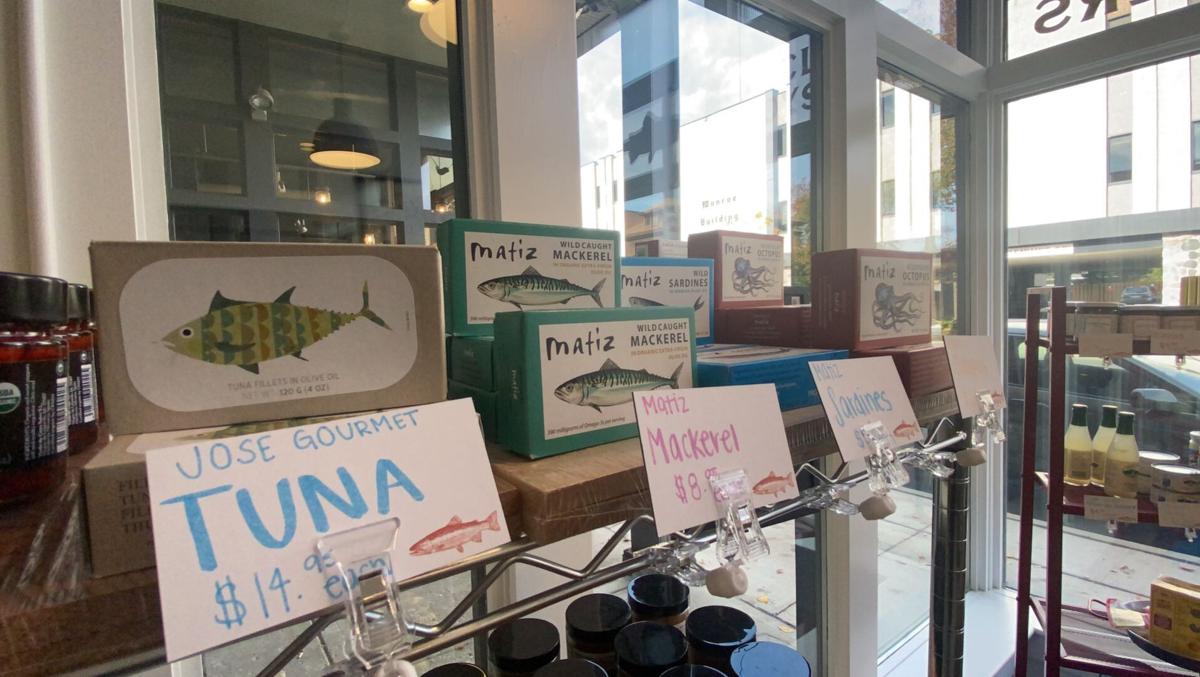 In addition to fresh and frozen seafood, offerings at Berke & Benham Seafood Market include tins of tuna, mackerel, sardines and octopus from Spain. 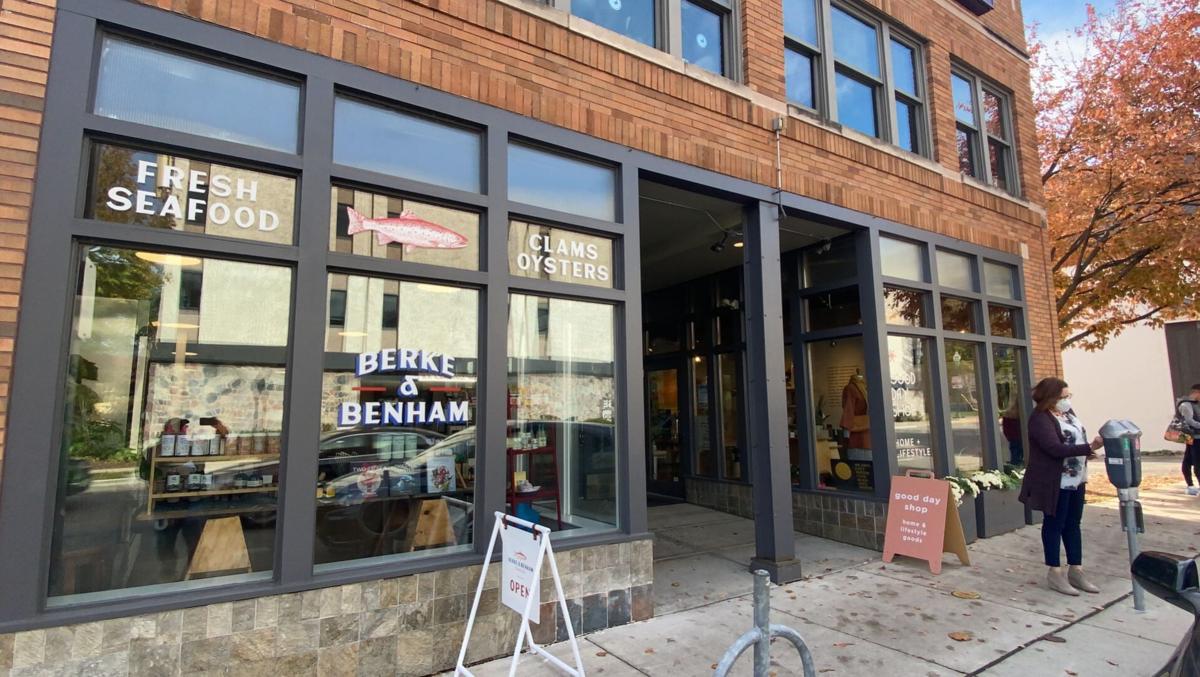 Berke & Benham Seafood Market is at 1925 Monroe St. between the Good Day Shop and Brasserie V. 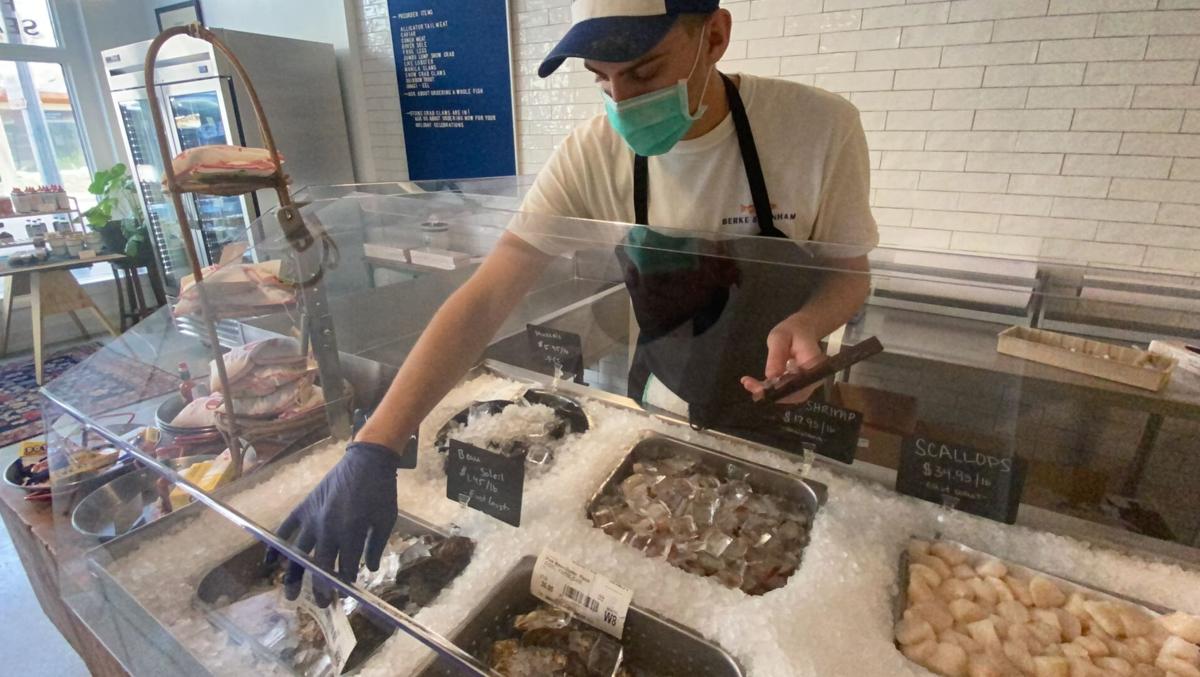 James Brown of Berke & Benham Seafood Market began his shift on Wednesday by organizing the inventory in the display case. It included gulf shrimp, mussels and scallops.

The small grocery area of Berke & Benham Seafood Market may soon be expanding.

James Brown fills out slips for customers who have ordered fresh stone crab caught in Florida. The claws are among the most expensive items in the seafood industry. These claws were being sold for $42 a pound, but are known for their sweet taste. 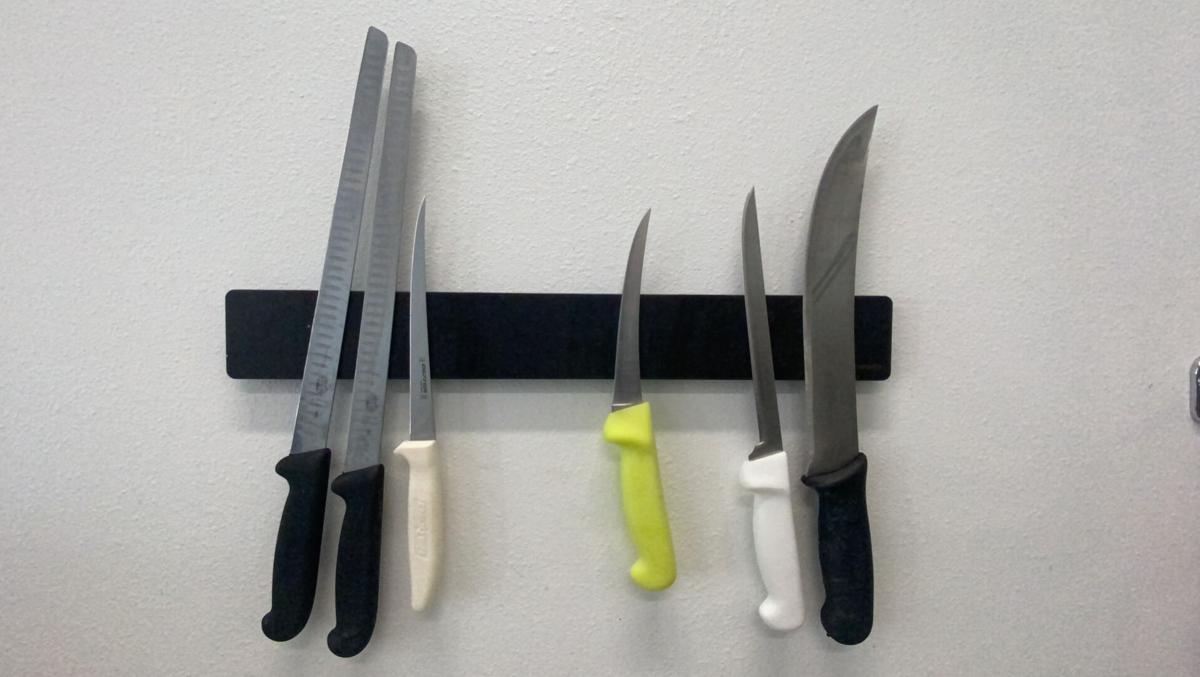 Fillet and butchering knives are at the ready at Berke & Benham Seafood Market. 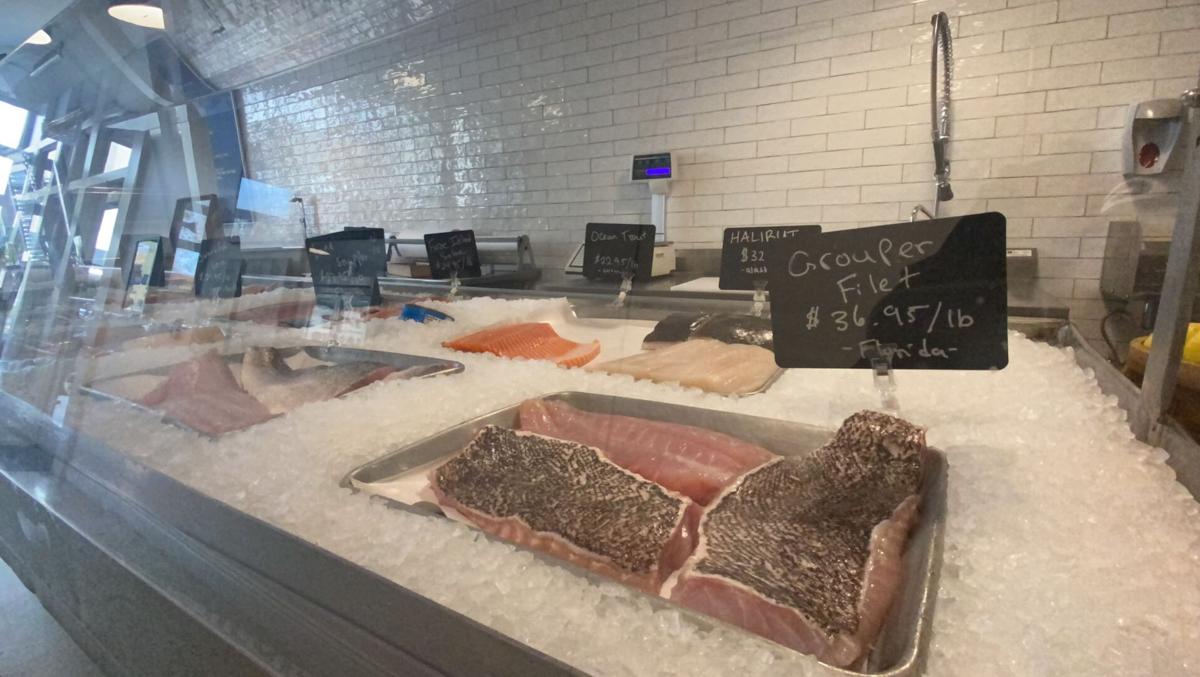 Prices for fish can vary at Berke & Benham Seafood Market from day to day, depending on availability.