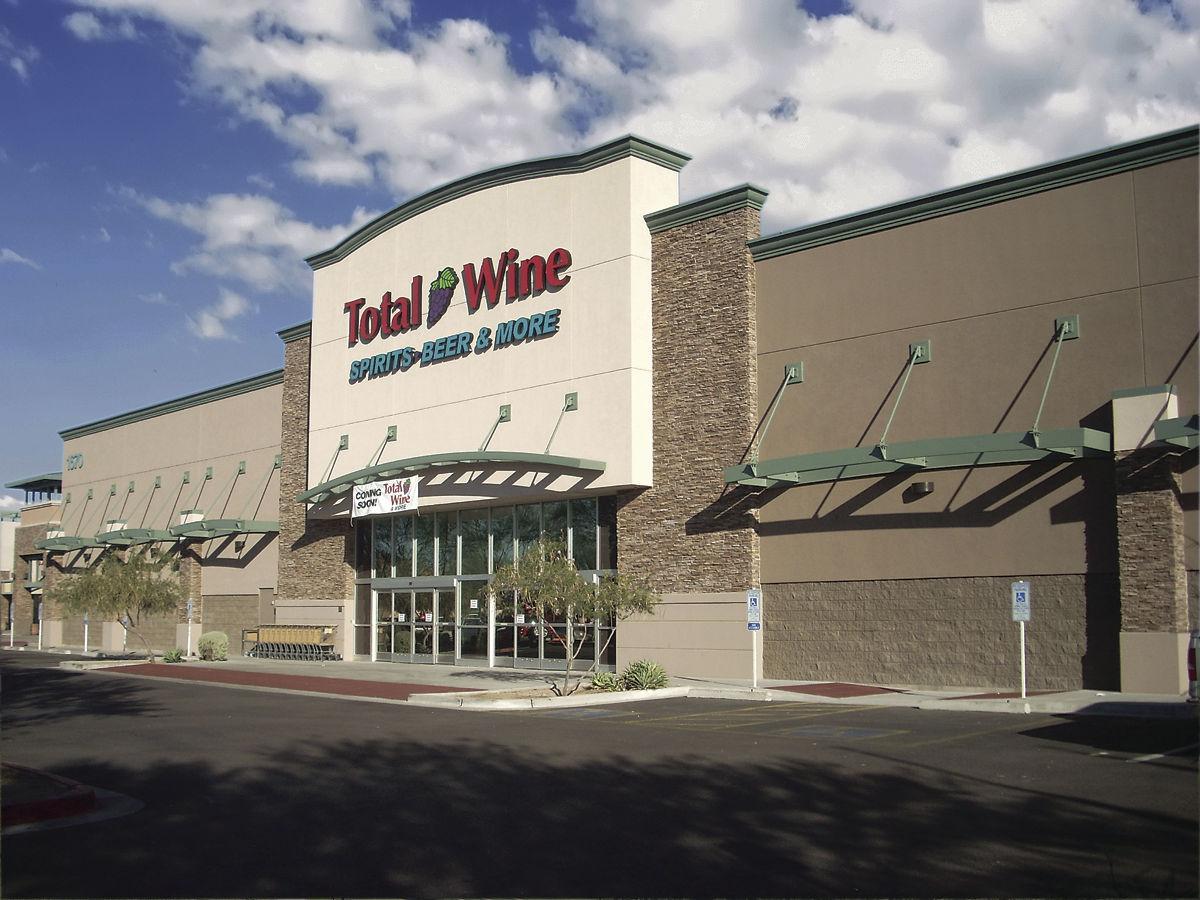 By the end of this year Total Wine will have 170 location in 20 states, including this store in Phoenix. 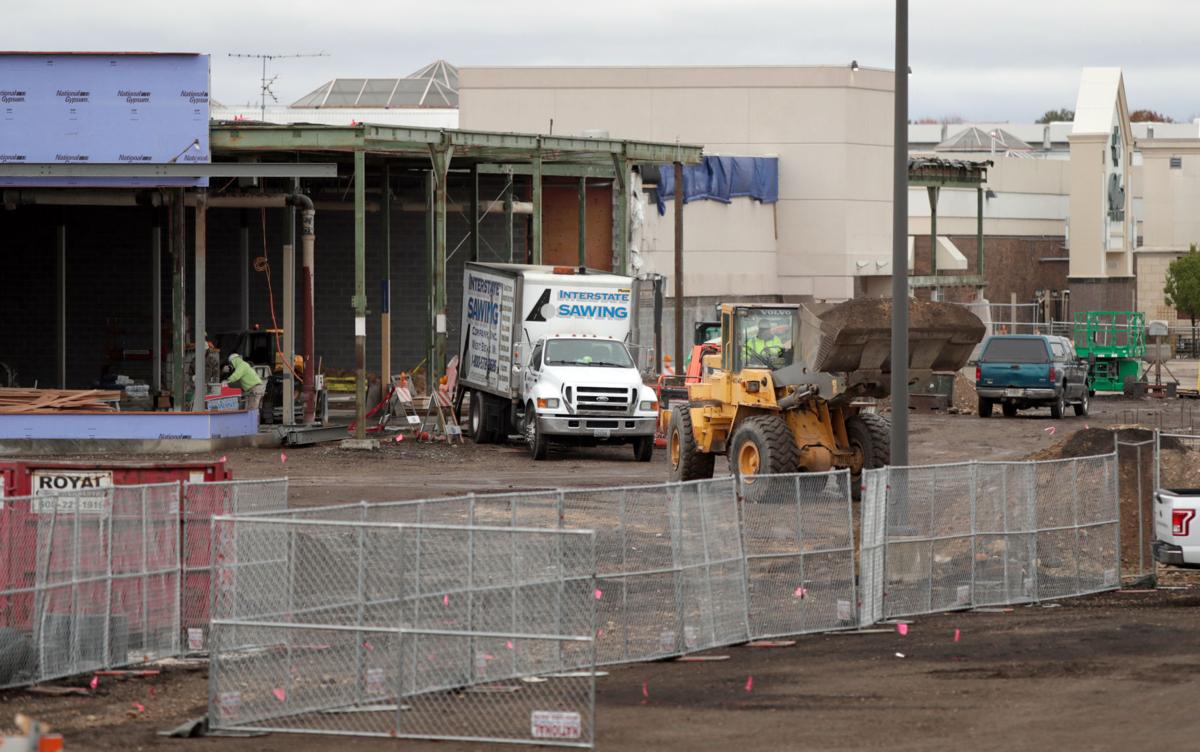 A $17 million project is transforming an 18-acre section of West Towne Mall, and one tenant emerged Tuesday: Maryland-based Total Wine & More is proposing to put a 23,000-square-foot beer, wine and liquor store there. 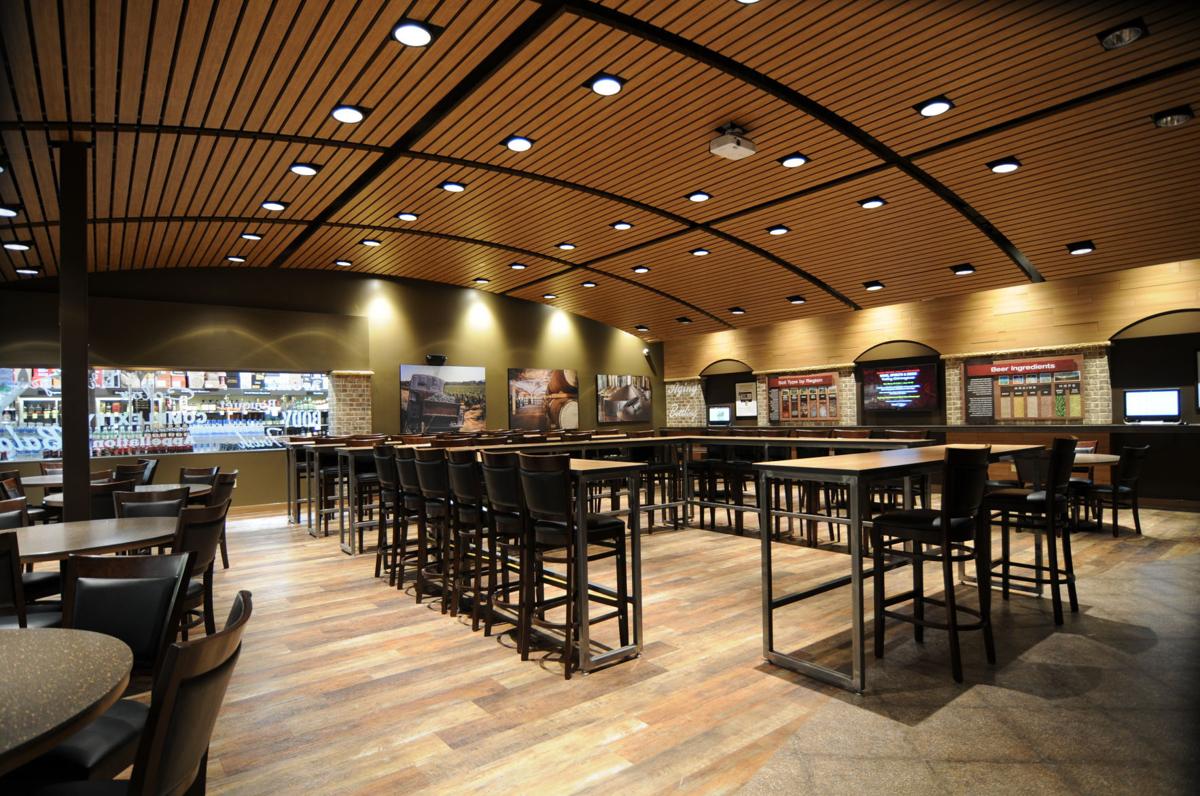 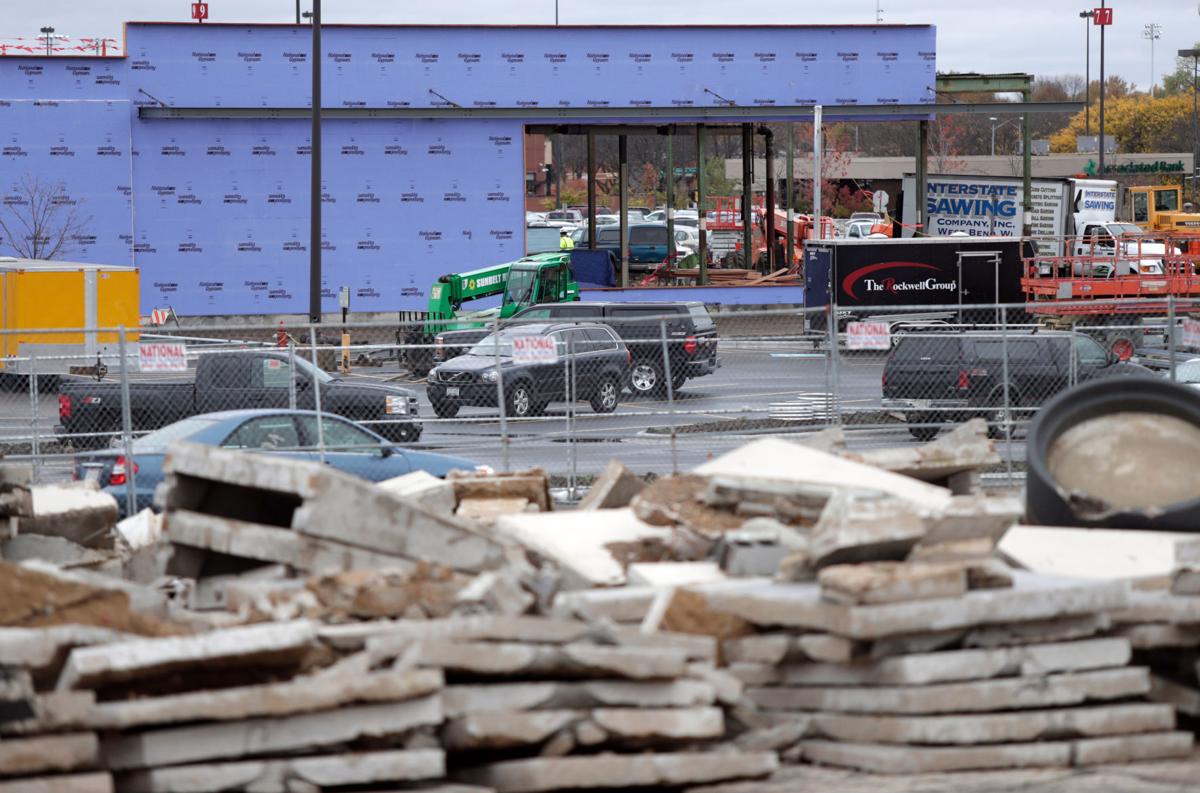 What had been part of a Sears store at West Towne Mall is being converted to a Total Wine & More and a Dave & Buster's. Both are scheduled to open next spring. 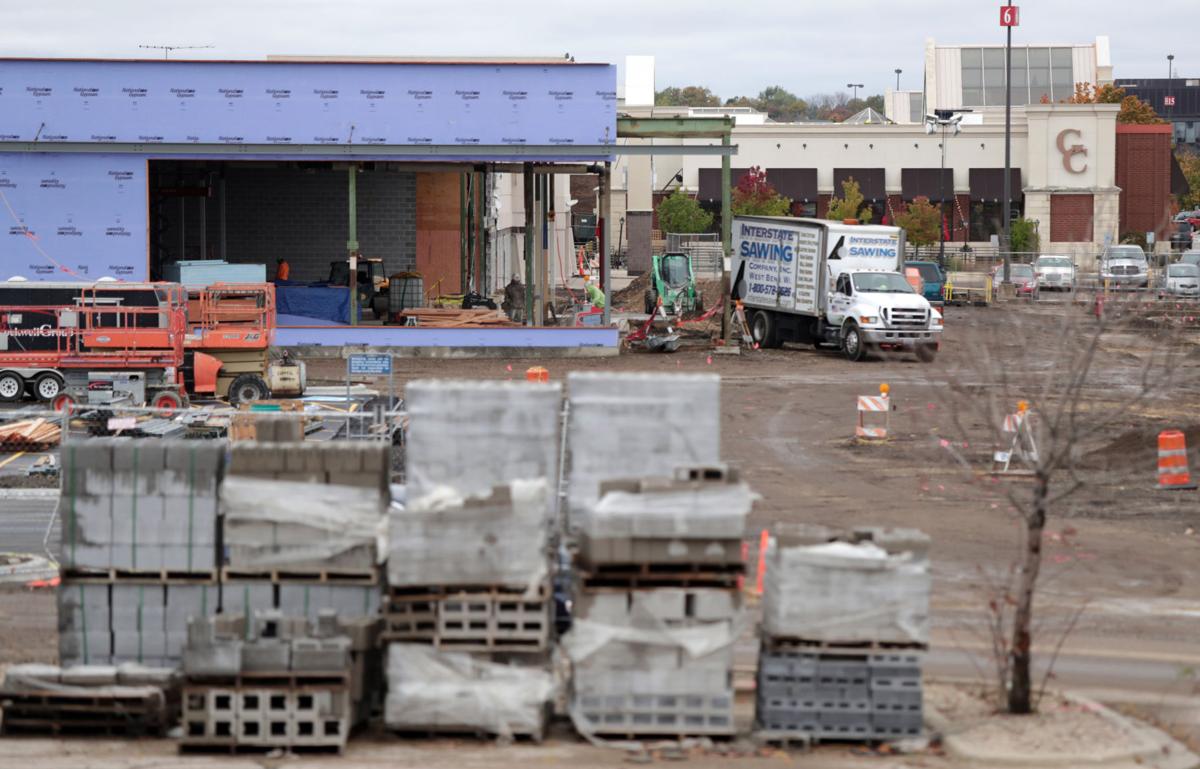 Construction proceeds on the southeast corner of West Towne Mall in Madison on a Dave & Buster's, left, and a Total Wine & More.

Madison’s wine, beer and liquor crowd could soon have another major shopping option.

Total Wine & More, a Maryland-based liquor store company, has filed a request with the city for a liquor license for a 23,146-square-foot store at West Towne Mall. The store would be nearly twice the size of the nearby liquor store at Woodman’s Market and be located in the highly visible southeast corner of the mall near the intersection of South Gammon Road and the Beltline.

The proposed store would use part of the space that became available last year when the Sears store was reduced in size and be located adjacent to a 31,000-square-foot Dave & Buster’s restaurant scheduled to open this spring.

Total Wine bills itself as the country’s “largest independent retailer of fine wine, beer and spirits” and by the end of this year is scheduled to have over 170 locations in 20 states. In November 2016, Total Wine opened its first store in Wisconsin in Brookfield and will open a 24,000-square-foot store next spring in Greenfield.

The Madison store would be its third location in the state and is scheduled to open in May, according to documents filed with the city. Total Wine is requesting a class B liquor license similar to what a bar would obtain. Such a license would allow special events in the store, which would be equipped with a 48-seat education center, tasting bars and a growler station to fill jugs of beer for home consumption.

The Greenfield store has a class B license, but Brookfield officials rejected that store’s plan for a class B license, resulting in a class A license that allows the store to pour only limited samples. Ald. Paul Skidmore, who represents the Far West Side of Madison, said the Madison license request will be introduced to the City Council next week, and he plans to meet with Total Wine representatives prior to the November meeting of the Alcohol License Review Committee.

“I’m not sure it’s going to be an issue given its location,” Skidmore said of the request for a class B license. “There are no residential neighbors, and Total Wine has a good reputation.”

But the arrival of Total Wine will mean more competition for long-established retailers like Woodman’s, Pick ’n Save, Hy-Vee, Metcalfe’s and Costco. In addition, Kwik Trip, which has beer and wine sections at most of its stores, is scheduled to remodel PDQ stores in the Madison area after purchasing the convenience store chain this year.

Smaller independent stores, however, could be vulnerable. Steve’s Liquor was founded in 1952 and has stores at Orchard Point in Fitchburg and in Madison at 122 Junction Road and 3618 University Ave., both of which are relatively short drives to West Towne.

Wayne Crokus, general manager at Steve’s on University Avenue, said the store added a six-tap growler bar in 2016 and this year increased the size of its beer cooler by 50 percent. He believes the arrival of Total Wine will be widely felt.

“Anytime anyone comes in, whether it’s a big chain or a small store, it makes you go back and re-evaluate what you’re doing,” Crokus said. “There are competitors all over the place.”

Seritage Growth Properties in New York purchased the 18-acre Sears property from CBL & Associates, which owns West Towne Mall, in 2015, and in recent months has been renovating the Sears building and the parking lot. The $17 million project has included reducing the 111,000-square-foot Sears store to 56,000 square feet to make room for Dave & Buster’s and Total Wine.

Seritage, however, has backed away from plans to convert the Sears Automotive Center into two restaurants. Designs for the automotive center had called for outdoor patio seating on the ground level and outdoor dining space on the second level for one of the unidentified restaurants on the northern half of the building.

Total Wine was founded in 1991 by brothers David and Robert Trone, who opened a small store in Delaware. Now a typical store carries 8,000 different wines, 2,500 different beers and 3,000 different spirits. But the company has also developed a strategy that over the years has upended state liquor laws in a number of states.

According to the Boston Globe, the company is “tilting the marketplace to its advantage through a mix of litigation, lobbying, and rallying support from customers.”

Among the examples cited include lifting the ban on Sunday alcohol sales in Minnesota, lobbying for later closing times for liquor stores in Connecticut, overturning a ban on volume discounts in Maryland and lifting the cap on the number of store licenses in South Carolina, the newspaper reported.

State records show the company spent about $135,000 lobbying state officials since January of last year, the majority of those efforts directed at issues regarding class B liquor licenses.

A company spokesman for Total Wine did not return a message seeking comment.

Jerry O’Brien, executive director of the Center for Retailing at UW-Madison, said while lower prices can drive shoppers to new stores, other tangibles are also at play.

“It would seem to me that the location for Total Wine will require a special trip to shop there and that grocery stores where you can simply pick up a wine to go with your meal will continue to do well,” O’Brien said.

“As far as Steve’s go, they have convenient locations with easy in and out and I would see that as an advantage,” O’Brien said. “My experience is that they also have knowledgeable staff. So I’ll wait to see if Total Wine could improve on the shopping experience and value.”

Cheese returns to Paoli as hamlet continues to thrive

Landmark Creamery plans to open a store and aging facility in the artisan's colony along the Sugar River.

The 2,600-square-foot pharmacy will specialize in chronic diseases and not sell other retail products like food, drinks and cosmetics.

About 330 people wait in line to explore the 21,000-square-foot clothing store

Cornblooms closing after more than 4 decades of shoe sales

The store, now at Hilldale Shopping Center, expects to close its doors by the end of the year

A store with some pop opens in downtown Mount Horeb

The Pop Place features over 450 varieties of soda.

Pick'n Save proposes gas stations for some of its stores

Stoughton would be among the first but its unclear if other Madison area stores will be considered.

Noel Anderson's photograph shows off character and characters of the East Side shop.

Bargain Nook looks for another Spring Green location after fire

The store is one of five operated by the Hodan Center, a non-profit in Mineral Point that assists those with developmental disabilities.

The Appleton-based book company founded in 1976 in Rhinelander is liquidating.

The fixtures from Wittnebel's Tavern in Old Ashippun could be part of an interactive exhibit by the Wisconsin Historical Society after the family donated the items for posterity.

Some stores offer shopping on Thanksgiving, others open Friday morning, and some suburban communities offer their own traditional take.

Pick'n Save and BP team up for fuel savings program

The company announces a partnership with Instacart to offer delivery to customers who shop at Madison and Milwaukee area stores.

Transactions at Total Wine not always a single affair

Because of its liquor license from the city and state law, Total Wine's customers are limited to purchasing no more that four liters of hard alcohol per transaction at its West Town store.

By the end of this year Total Wine will have 170 location in 20 states, including this store in Phoenix.

A $17 million project is transforming an 18-acre section of West Towne Mall, and one tenant emerged Tuesday: Maryland-based Total Wine & More is proposing to put a 23,000-square-foot beer, wine and liquor store there.

What had been part of a Sears store at West Towne Mall is being converted to a Total Wine & More and a Dave & Buster's. Both are scheduled to open next spring.

Construction proceeds on the southeast corner of West Towne Mall in Madison on a Dave & Buster's, left, and a Total Wine & More.