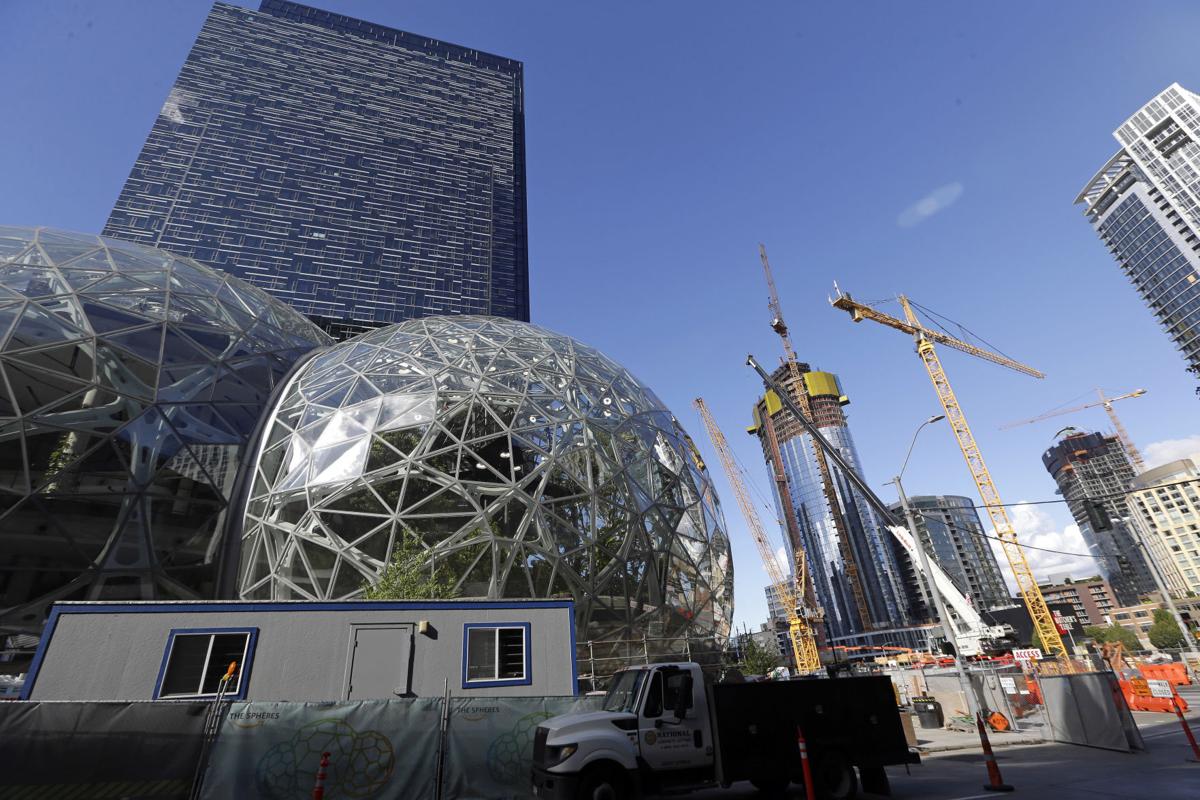 The Madison area is one of dozens of communities bidding to become home to the second headquarters of Amazon. In Seattle, construction around headquarters of the tech and retail giant -- home to some 40,000 employees -- has been nearly constant since it opened in 2010. The "biospheres" in the foreground, with space for meetings, meals and mingling, are set to open next year. 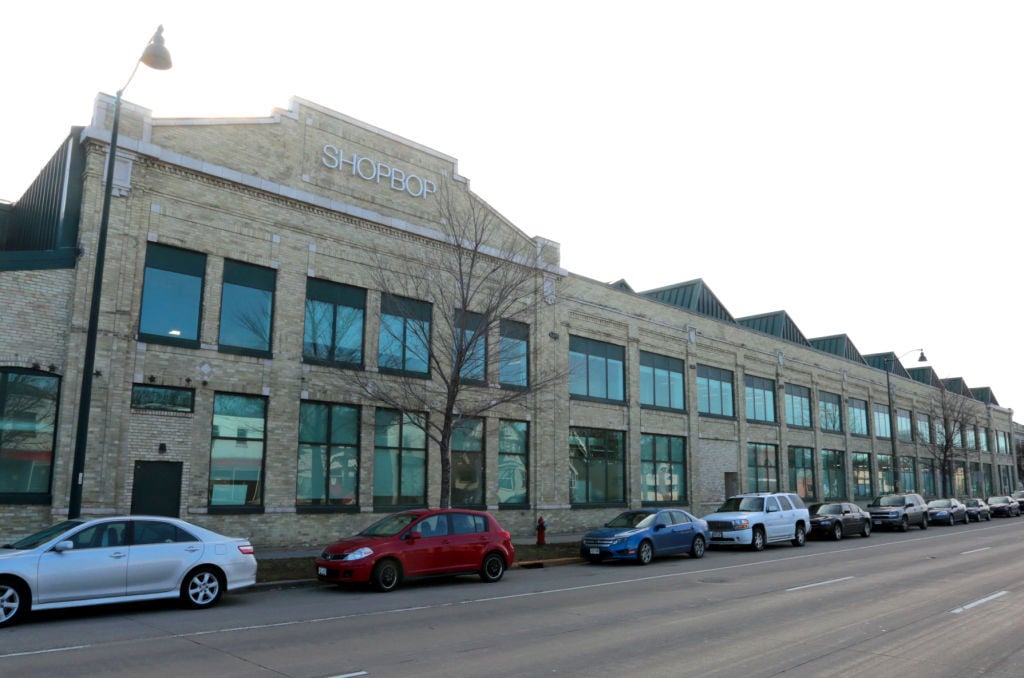 Online apparel retailer Shopbop, 1301 E. Washington Ave., is owned by Amazon, which could be a point in the city's favor as it applies to be the home of the retail giant's second headquarters. 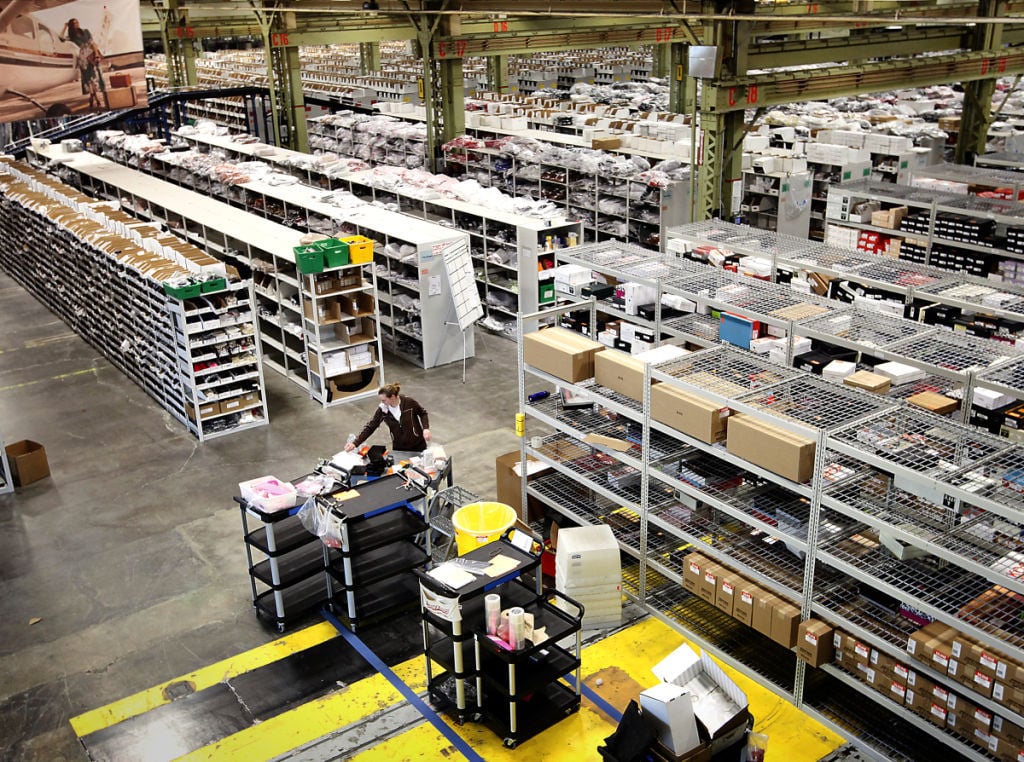 The Madison region is vying for a chance to house Amazon’s second headquarters — one of more than 100 communities across the U.S. hoping to land the online retail giant and its promise of 50,000 high-tech jobs.

The Madison Region Economic Partnership (MadREP) submitted a 180-page application Wednesday afternoon on behalf of the eight-county region it represents, MadREP president Paul Jadin said. The theme of the pitch is: “We are a younger version of Seattle and Amazon can grow with us.”

Financial incentives are part of the package, but no total is being floated at this time, Jadin said. “Each host community is offering significant tax incremental financing support,” he said. “Project parameters are not clear enough for a specific dollar figure.”

Instead of presenting one big swath of land, the proposal offers a combination of five locations in the Madison area.

Jadin would not name the sites, but three are in Madison — one on the East Side, another on the Far West Side in the as-yet unused University Research Park 2. He declined to specify the third Madison site.

Research park director Aaron Olver said he provided background information on the business park at Junction Road and Highway M. “Should Amazon become interested in Madison, I’d welcome the opportunity to pitch University Research Park 2 and the strengths of the University of Wisconsin-Madison to them,” Olver said.

Fitchburg officials said property in its Uptown development at Highway 14 and Lacy Road is part of the package, as well.

Fitchburg has 100 acres available, economic development director Michael Zimmerman said. “We can definitely accommodate the square footage that they’d eventually like to do,” he said.

With apartments already built in Uptown, single-family homes on the way, and restaurants and retail expected to follow, a corporate anchor like Amazon would complete the vision of Fitchburg’s Uptown as an urban business district, Zimmerman said.

The fifth Dane County site also has not been disclosed.

Amazon put out a call for proposals in early September saying its second headquarters will be comparable to its Seattle base.

“We expect to invest over $5 billion in construction and grow this second headquarters to include as many as 50,000 high-paying jobs,” the company said in its pitch. Salaries will average more than $100,000 per employee.

Amazon said it prefers an area with a population of at least 1 million with a “stable and business-friendly environment”; the potential to attract and keep strong technical talent; that thinks “big and creatively” about locations; and has strong educational institutions and an “overall high quality of life.”

Bids were due Thursday and more than 100 cities — including Milwaukee — have said they planned to give it a try, CNBC said.

Some cities are going big in their effort to woo Amazon. The Tucson area, for example, trucked a 21-foot saguaro cactus to Amazon, and the city of Stonecrest, Georgia, said it would rename a 345-acre site “the city of Amazon” if it is chosen, according to CNN.

He said the city and MadREP put together “a very nice proposal, a professional proposal. But we are not doing any razzle-dazzle kind of thing.”

While there’s no international airport in Madison, it’s a short ride to Chicago’s O’Hare airport or Milwaukee’s airport, he said, and the area has high points that might interest Amazon: A relatively low cost of living and of operating a facility here, with a high quality of life.

“Although we didn’t necessarily meet all the criteria to the letter, we have the story, especially rooted in our workforce, our educational system and our quality of life, that would make us a great place to have an expanded Amazon presence,” Mikolajewski said.

It also didn’t hurt, he said, that Amazon already has a presence in Madison. Amazon bought trendy Madison clothing retailer ShopBop in 2006. The company had nearly 400 employees here as of 2015.

Several other high-flying tech businesses also operate here. Madison plays host to offices for Google and for San Francisco-based Zendesk, and suburban Verona is where Epic Systems Corp., one of the nation’s biggest electronic health records providers, has its sprawling campus.

Asked if the addition of 50,000 people would strain the infrastructure and housing stock of Dane County, whose population is just over 530,000, according to 2016 U.S. Census Bureau estimates, Mikolajewski said he doesn’t think so, since Amazon would not reach full employment for 15 years or more.

He said Madison already is projecting “fairly significant” growth over the next few decades, and the Imagine Madison community listening project is aimed at preparing for that.

“With the additional investment and employment, yes, we (would) need infrastructure and more housing but there would be individuals who can afford the housing and help support the infrastructure, and that benefits everyone,” Mikolajewski said.

Fitchburg’s Zimmerman said he thinks the Madison region’s bid is a “long shot,” but he said now that Foxconn has chosen southeastern Wisconsin for a $10 billion flat-screen factory and is considering establishing a health-related operation in or near Madison, Wisconsin is more prominent on the national radar screen.

Mikolajewski said it’s hard to tell what this area’s chances are, but, he added, even if it is not chosen for headquarters No. 2 “maybe there’s some other function of the company that Madison would be attractive (for).”

“We have a great story to tell,” he said.

Beneath the hype of Amazon's search for a second headquarters are numbers that defy gravity and a business strategy that investors wouldn't tolerate from most companies.

Amazon-owned Shopbop is closing its sole retail shop to focus on its growing online business.

Tech and Biotech: Iristocracy to preview its artistic eyewear

If that happens, it would be good for Madison, as well, Greater Madison Chamber of Commerce president Zach Brandon says.

Madison not among 20 finalists for second Amazon headquarters campus

Investors have put together the first round of funds aimed at bringing back the Wisconsin air carrier.

The Madison area is one of dozens of communities bidding to become home to the second headquarters of Amazon. In Seattle, construction around headquarters of the tech and retail giant -- home to some 40,000 employees -- has been nearly constant since it opened in 2010. The "biospheres" in the foreground, with space for meetings, meals and mingling, are set to open next year.

Online apparel retailer Shopbop, 1301 E. Washington Ave., is owned by Amazon, which could be a point in the city's favor as it applies to be the home of the retail giant's second headquarters.