Women in tech say: Treat us with respect, too
Share this
{{featured_button_text}}
1 of 2 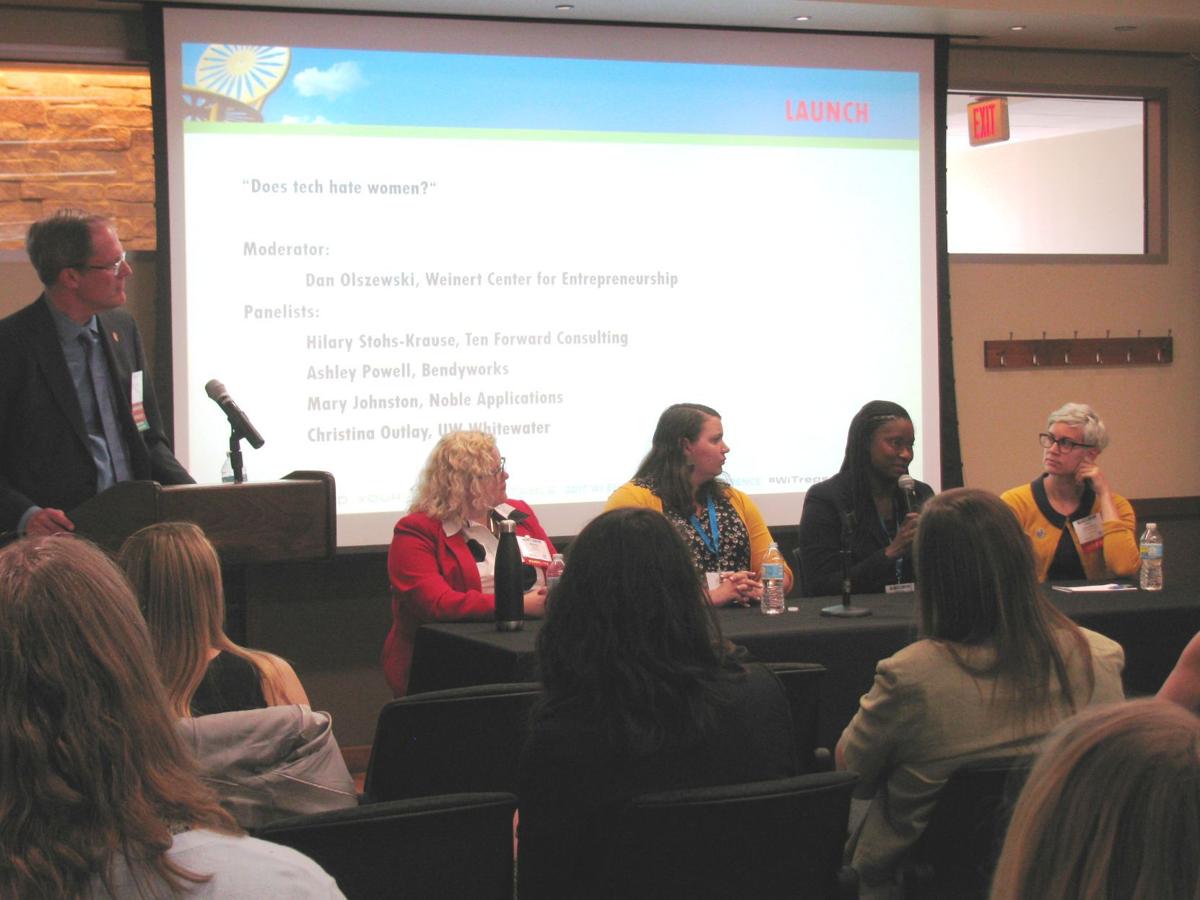 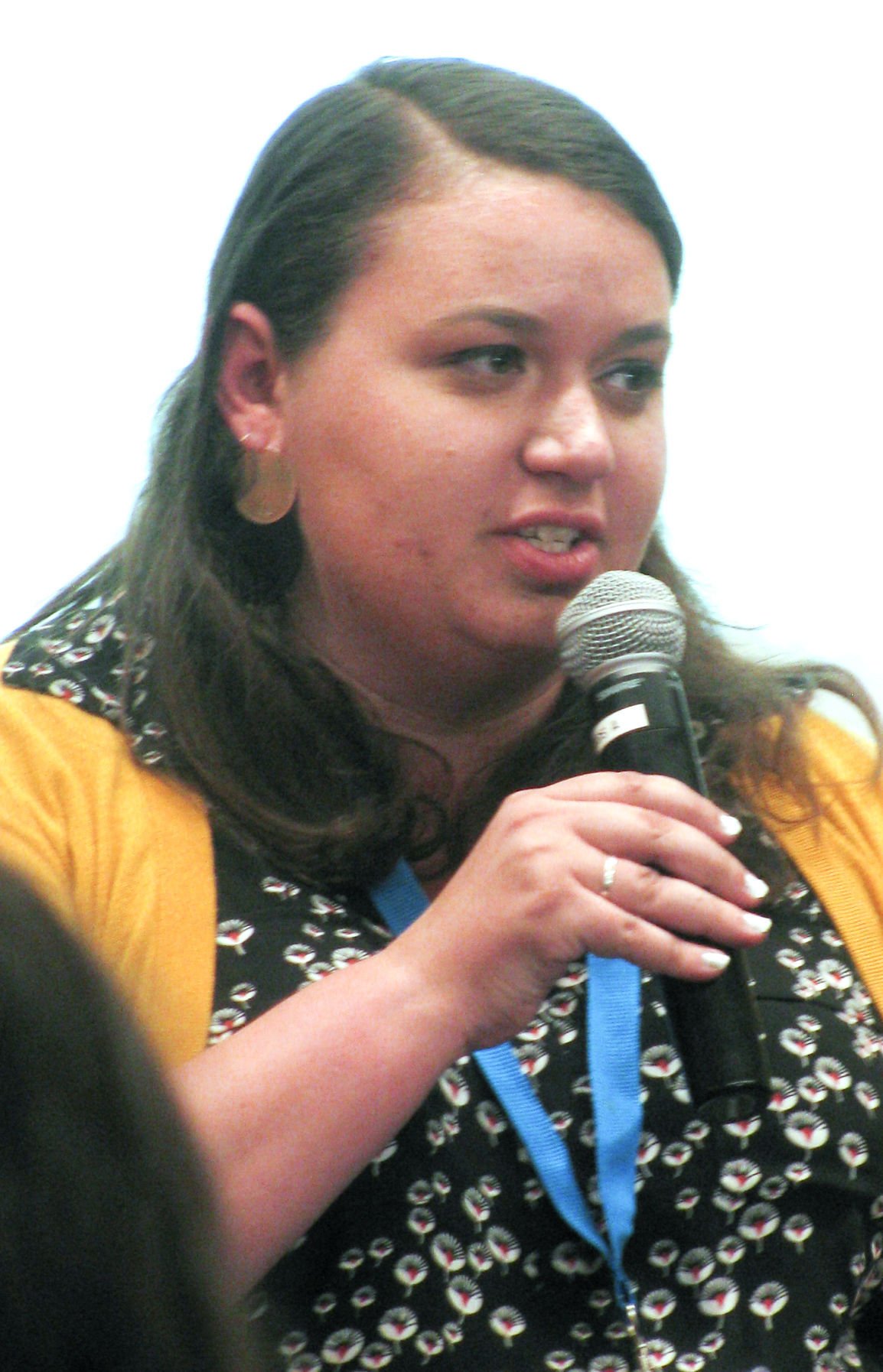 Mary Johnston, creative director at Noble Applications, speaks Tuesday at a panel discussion on women in tech at the Wisconsin Entrepreneurs' Conference.

The tech industry may be a hot market for jobs, but for women, there's often a chill in the air.

That's what speakers agreed at a panel titled "Does Tech Hate Women?" at the Wisconsin Entrepreneurs' Conference in Madison this week.

"Tech doesn't hate women; but maybe it doesn't know how to be nice to them," said Ashley Quinto Powell, business development manager at Bendyworks.

Powell said one of her previous employers gave male staffers an afternoon off to celebrate Father's Day but made no such acknowledgement of Mother's Day.

Tech companies are known for providing perks that include ping-pong tables and beer refrigerators, and that's fine, Powell said, but they should also offer perks aimed at women, such as child care-related benefits.

Mary Johnston, creative director at Noble Applications, said women in tech often deal with what she called "micro-aggression," such as offensive jokes their co-workers tell or being treated differently, as a token female employee.

"It's doubly bad if you are a minority, too," Johnston said.

According to data compiled by the National Center for Women & Information Technology, women held just 26 percent -- or, one of every four -- professional of computing jobs in the nation in 2016.

Meanwhile, a survey of women in tech, released in March by ISACA, a global technology association, showed 48 percent said a lack of mentors creates a barrier for women who want to advance in their careers, while 42 percent cited a lack of female role models as a barrier. Thirty-nine percent complained of gender bias at work.

Johnston said the tech industry overall is "indifferent to women." She said tech leaders should be speaking out about issues important to women, for example, denouncing proposals to scrap funding for Planned Parenthood.

"Because women are an important part of our community. If they make it harder for them to live, we have a problem with that," she said.

Christina Outlay, assistant professor of information technology and supply chain management at the UW-Whitewater, said tech companies should work to recruit women and offer them a culture where they can be as strong and self-assertive as male employees.

"There's an impression that tech is a very difficult field, not fun, and full of nerds. ... If you want women to work at your company, you have to go out and get them," said Outlay, who runs workshops in the Madison area through a project called Colorcoded, aimed at teaching computing to girls and minority and low-income youth. She also holds a summer camp at the UW-Whitewater, CyberGirlz, to interest girls in technology.

Recruiting is not the only problem, so is retention, said Hilary Stohs-Krause, software developer at Ten Forward Consulting. For women, feeling "undervalued" is a big issue, she said.

Stohs-Krause said the ISACA survey results, showing a lack of women mentors and role models, are significant. "This is a big issue if you want to keep women in the tech industry," she said.

Dan Olszewski, director of the Weinert Center for Entrepreneurship at the UW-Madison School of Business, served as moderator of the panel. He said, afterward, the key advice for startups is to think about the message they may be sending, inadvertently, to potential employees.

"Listing ‘keg in the office and beer pong’ ahead of the company vision in the recruiting ad will likely be a turnoff for many high-quality applicants, especially women. The actions, photos and words you use to describe your company and its culture are incredibly important in attracting and retaining women in tech," Olszewski said.

The Eau Claire startup was named grand prize winner at the Wisconsin Entrepreneurs Conference on Wednesday.

Each of the startups will make a seven-minute live pitch at the Wisconsin Entrepreneurs' Conference in June.

Awards were handed out Wednesday afternoon at the Alliant Energy Center in Madison.

Nearly 240 ideas were submitted to the contest this year.

The early stage investing scene in Wisconsin is getting more robust but has a long way to go.

One award winner is a Racine fifth-grader with a bow tie business.

Mary Johnston, creative director at Noble Applications, speaks Tuesday at a panel discussion on women in tech at the Wisconsin Entrepreneurs' Conference.