Playing games: It's all in a day's work
Share this
{{featured_button_text}}
1 of 2 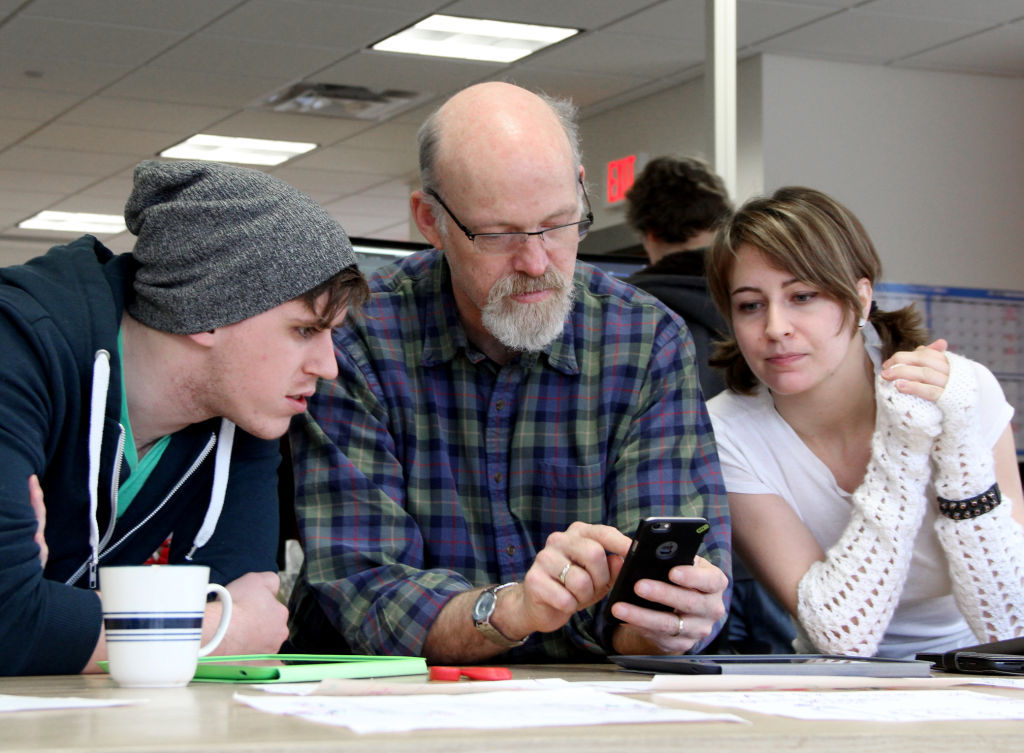 At Filament Games, Maxwell Zierath, CEO Lee Wilson, center, and Abby Friesen listen to the audio for one of the company's science games, Molecubes. 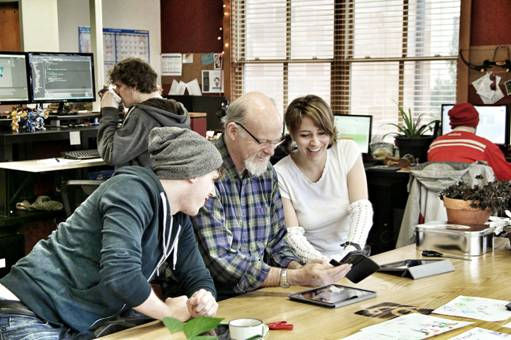 At Filament Games, Maxwell Zierath, CEO Lee Wilson, center, and Abby Friesen listen to the audio for one of the company's science games, Molecubes, and laugh as they hear Friesen's voiceover for a water-based character that dissolves into a gurgle.

If it sometimes seems Madison’s tech community is all about fun and games — well, yes, it is.

Digital games, that is, for fun, education and workplace training.

And Madison-area game companies are making their mark in prestigious ways, such as having a hand in “Call of Duty: Advanced Warfare,” “the biggest entertainment launch of the year,” as Activision trumpeted.

Local game creators are working with the U.S. Navy, the Smithsonian Institution, and the Jack Welch Management Institute, and spreading their wings to China, while a UW video game expert has influenced the White House.

Just how much has the video game development cluster grown here in recent years?

HumanHead is one of at least four Madison-area computer, online and mobile game development companies with 20 or more employees. Smaller groups, with only a handful of workers, are also publishing products, though getting started is a struggle, said one CEO.

The more established companies are racking up impressive wins:

Raven Software was one of parent company Activision’s studios that created “Call of Duty: Advanced Warfare.” The video game, released in November, was “the highest-selling digital launch in console history,” Activision said in a pcmag.com article.

It’s the fifth “Call of Duty” game Raven has been involved in. The Middleton company is in charge of the online version, and will launch it in China in January along with Chinese game company Tencent Holdings, Raven studio head and Activision vice president Brian Raffel said.

Filament Games, an educational game developer, is working on a simulation game for the U.S. Navy to help recruits learn to use sonar, and creating science games for the Smithsonian Institution.

CEO Lee Wilson said Filament produced a multi-player science and math game, “The Radix Endeavor,” last spring that was funded by the Bill & Melinda Gates Foundation and released by the Massachusetts Institute of Technology (MIT).

Mobile game developer PerBlue came out with its latest game, “Titan Empires,” in October. After being a featured game in the Google Play store for one week in mid-October, “Titan Empires” hit the one-million-players mark within three weeks — a milestone that took three years for PerBlue’s first game, “Parallel Kingdom,” to reach.

Gerritsen said tech games have become a lot more pervasive, and you might be surprised about who’s playing them.

“The industry is a lot wider and a lot deeper than people give it credit for,” Gerritsen said.

In Madison, the first major force in game development was Raven. Started in 1990 by brothers Brian and Steve Raffel, the company was purchased by Activision in 1997 in a deal worth about $12 million. Raven’s many titles include “Singularity,” “X-Men: Legends” and two “Star Wars Jedi Knight” games.

After paring staff during the recent recession, Raven is back up to 175 employees at its studios at 8496 Greenway Blvd., and is now also in charge of Activision’s studio in Shanghai with 100 employees.

Gerritsen joined with a group that split off from Raven in 1997 to form HumanHead. The company has had its ups and downs, and Gerritsen left for about six years.

He started another Madison game company, Big Rooster, then closed it to work for a Boston game developer. Gerritsen returned to HumanHead in July 2013; the company, at 1741 Commercial Ave., has 42 employees.

He said games are a crucial part of education because they help students learn through action, and learn from their failures.

“If you fail a test, it’s bad for your grade. If you fail at a game, you can start over, again and again. ... Games get students energized. If you can tap into that, you get more buy-in,” Gerritsen said.

Filament, founded in 2005, incorporates some of those ideas in its educational games.

After building “Shutterbugs” last year with the Smithsonian — aimed at teaching kindergartners about verbs using zoo animal figures — Filament signed an agreement this October to work on four more science games with the Smithsonian. One will be about force and motion, using “bumper ducks,” Wilson said.

Filament sent a team to an educational game jam at the White House in September, where developers brainstormed with top U.S. science teachers.

The Madison team designed “Land Grab,” a game about sustaining natural resources. Wilson said he’s applying for a United Nations grant so the game could be used in classrooms worldwide.

With new, educational “Next Generation Science Standards” recently developed, Filament is preparing to grow. The company, at 2010 Eastwood Drive, has 47 employees and plans to hire eight more.

Next summer, Filament will move from the East Side to 316 W. Washington Ave., Downtown, to accommodate a potential doubling in staff by 2020.

PerBlue began in 2008 when a couple of Microsoft interns started devising games as a diversion.

The company has “more than 20” employees, chief operating officer Forrest Woolworth said; at its peak in 2012, there were 35.

Its key ingredient lies in social connections formed by online communities of players. “That’s the whole motivator,” he said.

PerBlue raised $3 million from investors last spring and moved from the West Side to the central city.

At least two smaller, young game development companies are getting some attention, too. Ronin Studios & Consulting designs games for use in the workplace, to train and motivate employees.

Founded in 2012, Ronin has five employees. So far, most clients are local, but Ronin did a project in 2013 for the Jack Welch Management Institute in Washington, D.C. Welch is the former CEO and chairman of General Electric.

Meanwhile, Gristmill Studios, a Fitchburg startup, makes Xbox games and won in the information technology category of the Governor’s Business Plan Competition in 2013.

Ronin founder and CEO Scott Kohl worked at Raven and was chief operating officer at Filament. Game development is a hard industry to break into, he said, and requires a lot of resources to hire top-notch graphics, audio and animation staffers who can create a game that will make gamers say, “Wow, what a great experience!”

As a cluster, Madison’s digital game development industry is “a little anemic,” Kohl said. He estimated there are half a dozen viable businesses and up to two dozen hobbyists.

Filament’s Wilson said, though, in his niche, Madison is one of the top three academic centers for games in the U.S., along with Arizona State University and MIT.

One reason, Wilson said, is Constance Steinkuehler and Kurt Squire, co-directors of the Games + Learning + Society center at the Wisconsin Institutes of Discovery on the UW-Madison campus. The group studies the way games are used to transform learning.

Steinkuehler, an associate professor of digital media at the UW, served as senior policy analyst at the White House Office of Science and Technology Policy in 2011-2012, advising the Obama administration about online games.

She is also executive director of the Higher Education Video Game Alliance, created to advocate for “the cultural, scientific, and economic importance of video game programs in colleges and universities.”

Gerritsen, who was on a panel with Wilson and Woolworth at a recent Wisconsin Innovation Network meeting in Madison, said as society becomes more tech-oriented, games will play an increasing role, in all sorts of settings.

“Games, eventually, are just going to be a part of what we do,” he said.

The annual contest for area agents and brokers helps take the temperature of the recovering local economy.

Former Raven employees can be found teaching or designing at other local game studios.

GREE International Entertainment is buying the mobile, role-playing game for an undisclosed price.

The Madison educational games company has created digital games such as Fossil Forensics, Tikiquations, and You Make me Sick.

But it wasn't until he came here to speak that Forbes author Joel Kotkin knew about the local tech hub, officials say.

Where the games begin

Madison is in the business of manufacturing fun.

At Filament Games, Maxwell Zierath, CEO Lee Wilson, center, and Abby Friesen listen to the audio for one of the company's science games, Molecubes.

At Filament Games, Maxwell Zierath, CEO Lee Wilson, center, and Abby Friesen listen to the audio for one of the company's science games, Molecubes, and laugh as they hear Friesen's voiceover for a water-based character that dissolves into a gurgle.